Livewires was a 2005 mini-series set in the Marvel Universe. The titular characters are advanced androids and gynoids , optimised for special intelligence and tactical operations.

The series was written and partially drawn by Adam Warren, an American artist who first became known for spin-off sequels of successful manga .

Cornfed is the team’s healer and support. His stomach holds a nano-factory, which provides a supply of Smartware. Cornfed can regurgitate it onto his team-mates to fix damage they’ve taken to their outer Smartware flesh.

(Smartware – this is the substance of which the mechas flesh-like exoderm is composed. It is also used for other internal functions.)

He can also ingest Smartware, to be used as an extra reserve. It is standard operating procedure for him to ingest the Smartware shell of any of his team-mates that are destroyed, so that it doesn’t go to waste. He is capable of connecting to other computer systems via a remote internet connection, and is talented at breaking into secure systems.

He is capable of accessing the sensory input of the other Livewires, and processing it faster than they could. He does the heavy processing for the team. Cornfed is able to run multiple, processor-heavy operations at the same time.

All Project Livewire mecha have the same basic design, giving them:

They share a group intranet, which allows them to communicate by thought. This is their main method of communication with each other.

Cornfed is a “semi-autonomous, artificially intelligent, limited-nanofunction, humanform mecha construct”, or mecha . The R-word [robot] is considered politically incorrect by the older Livewires. They were created by the top-secret, quasi-governmental R&D program Project Livewire, based on the technologies used to create the Mannites and SHIELD’s LMDs .

Project Livewire built ten mecha. Six were trained and tested at the Project, the other four being left deactivated until they were needed to replace lost members of the team.

The mecha have all been programmed to be absolutely loyal to Project Livewire, and to follow the main goal of seeking out and destroying other top-secret, quasi-governmental R&D program. They have a list stating the priority they are to be given.

When they were programmed, the head programmer was aware of a logical hole in their directives. It meant that as the only ones hard-wired to be absolutely loyal to Project Livewire, the mechas were the only ones that could be fully trusted to fulfil its directives. As a result they killed all the human members of the Project, and set out on the road to fulfil their programming. 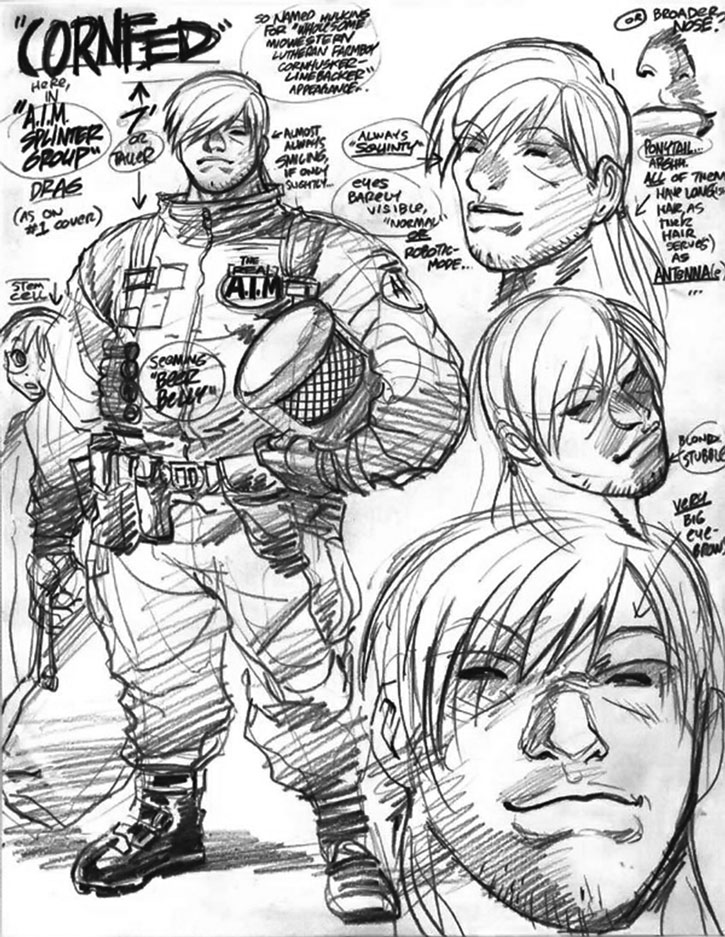 They performed a number of missions sabotaging other top-secret, quasi-governmental projects. The Livewires remained undetected, either by making things look accidental, or by arranging for other targets to be blamed for their actions.

On one mission they uncovered a link to the “White Whale”, the highest priority target on their list. They stowed away in a container of inert nanofluid that A.I.M. was trading to the White Whale and managed to get on board its rogue S.H.I.E.L.D. helicarrier.

The White Whale turned out to be a hive mind. It was commanded by a couple of Nick Fury LMDs infected with a Hydra nanoware attack virus.

They were detected soon after arrival, and found themselves overwhelmed. Cornfed was the first to fall. But while down, he managed to hack into the White Whale’s systems. This lasted long enough to provide covering fire for the others to escape, before his body is destroyed by the White Whale’s drones.

After Stem Cell destroys the White Whale she gathers the remains of Cornfed, and the other Livewires. She intends to rebuild them.

Cornfed has a calm, detached manner. While not as quiet as Hollowpoint Ninja, Cornfed only talks when he has something to say, and rarely gets excited.

Like all the Livewires, he has been programmed to be completely loyal to the Project directives. He would even have to give up his life if it was required for the mission.

Through overrides to their programmed human personalities, they are capable of suppressing panic and anxieties. This allows them to perform their job without such worries.

“You can call me ’Cornfed‘. Something t’do with my husky Midwestern probable-Lutheran cornhusker-offensive-lineman extreme caucasianness.”