Strong and durable, Corrin possesses telekinetic powers. These allow her to throw about heavy objects with her mind, or project blasts of pure force.

Corrin is a member of the first race of humans to achieve a level of power, who resided in ancient Atlantis. She was one of the ones who chose to remain behind in suspended animation to watch over humanity. Meanwhile, the rest of the Atlanteans decided to make “the transition”, moving on to a higher plane of existence.

Unfortunately the energies released by the ’transition’ caused Atlantis to sink beneath the waves. This left the suspended Atlanteans trapped in their long sleep for longer than intended.

Corrin woke to find herself in another universe. She was stranded on a planet with 99 other individuals from various parts of her universe. The Negation locals referred to it as “the Bright Universe”. She assumed it was just another of the vivid dreams she’d been experiencing.

One of the prisoners, Kaine, convinced them that they had been brought there for testing by hidden observers. The prisoners agreed to follow his lead. His lead led their captors to bringing them into the prison proper, where they underwent further lethal testing. Allowing Kaine to again take the lead, they broke out of the prison.

Seizing a craft, it lifted off before most of the prisoners were aboard. Evinlea managed to take herself and a few others, including Corrin, off planet in an air bubble. She did so just before the Negation destroyed the planet to try to stop their escape. They were rescued just in time by a passing vessel.

They stumbled across the other group of escapees on a lifeless planet days later. Hostilities ensued over the perceived abandonment. This was cleared up as being due to the stolen ship’s automated systems.

But before they could decide on their next course of action, they were attacked by Lawbringer Qztr, one of the elite of the Negation. After easily handling even Evinlea, Qztr apparently slew Javi.

Qztr was distracted from killing them when he discovered baby Memi to be completely immune to his attacks. He abducted her, taking her to the Negation god, Charon.

They soon found allies when the Battle Group came under attack from the Australians. Also recently abducted from the “Bright” universe, they had gained enormous power in the transit. The australians were dedicated to freeing the Atlantean, Gammid, from the clutches of the Emperor Charon.

Kaine’s group allied themselves with the Australians. They then used the shell of the destroyed flagship to slip through the warp gates and charge the Negation homeworld, where they’d learned both Memi and Gammid were being held.

Rescuing Memi and Gammid, although the Australians were killed and Kaine was missing for a short while, the escapees fled the homeworld. It was the battle on the throne world, and talking with Gammid, a fellow Atlantean, that made Corrin realize that she wasn’t dreaming it all. She finally began to take the situation seriously.

When they heard from Kaine soon after, they had to stop at a nearby planet. Their goal was to acquire tech to get to him faster than their ship would currently travel, as they’d be unlikely to get to him in time as it was.

They rescued Kaine, and he convinced them to try and help free the resistance leader, held in a secure prison facility. The mission cost Matua his life, further embittering some of the escapees against Kaine.

While re-supplying on a remote planet, they were attacked by agents of Charon, led by a former escapee, Javi. The battle cost the lives of Javi and Gammid. It left most of the escapees tired of their flight, and of Kaine leading them on an apparently impossible crusade against the Negation.

Corrin was among the escapees who decided to find a quiet planet where they could try and make lives for themselves.

Initially flighty and distant, viewing everything around her as a dream, she took delight in the variety of people she’d thought up. When she realised that she was awake, she became more serious, especially when Gammid revealed the fate of the other Atlanteans.

She is fiercely loyal to her friends, which didn’t include Evinlea, whom she shared a distrust of with most of the escapees.

“It’s official: This is the weirdest dream I’ve ever had.”

“I want to wake up now. This isn’t fun anymore.”

Bonuses and Limitations:
Force Field and Mental Blast are Contingent on Telekinesis (-1).

Initially during her time in the Negation Universe she had the MPI and Uncertainty Drawbacks, believing she was just dreaming. These ended when she met Gammid.

When she first arrived in the Negation universe, her powers were subject to the wild energies of the place until she became used to them. During this time, any attempt to use a Power (or Ritual) runs the risk of a Catastrophic Burnout. The Burnout of an offensive Power results in Area Effect (1 AP Range) Energy attack centred on the character at the AP level of the Power, to which they are also subject. 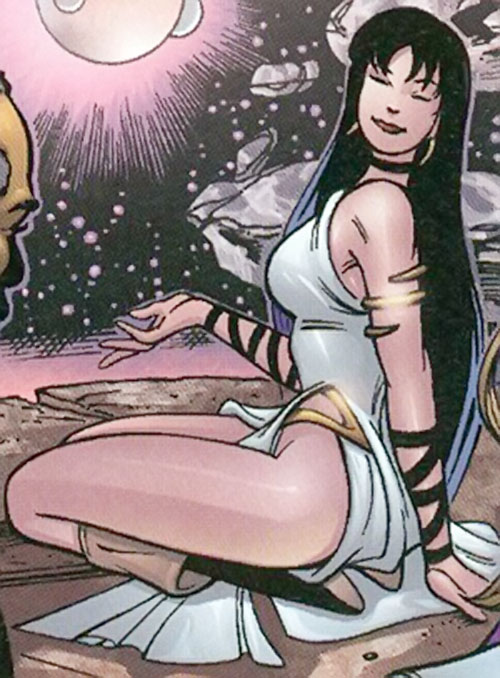