This LS is notable for fans of Wonder Woman during the 2000s, as it :

The Corvidae are also interesting as a small bit of fourth-wall breaking. They are gamblers with a specific interest in setting up duels for great warriors, even across dimensionsOther realms of existence that are not our universe..

So their thing is to organise “vs.” transdimensionalSomething that goes across two or more universes. crossover matches. That’s useful.

The Corvidae are shapechangers and magicians, and might classify as demons.

They can freely shift between crow form, human-like form and monstrous forms mixing the two. The flying forms are quite swift.

They aren’t immune to wounds. Arrows penetrated their flesh just as that of any human or raven. *However*, these specific arrows were likely god-forged. See our profile for Alkyone and the Circle for more about god-forged weapons.

The Corvidae can survive even fatal-seeming wounds with little hindrance. One gets the impression that their tissues slowly regenerate, and their pain is greatly diminished. Lila didn’t seem handicapped by having arrows stuck through her eyes and brains.

Still, the psychological shock of being wounded occurs to an extent. And decapitation seemed to work, at least for a while.

Wonder Woman mentioned a “feeling that the Corvidae are an Amazon problem”. This *might* mean there’s a relation between them and such creatures as the Crow-Children of Ares. 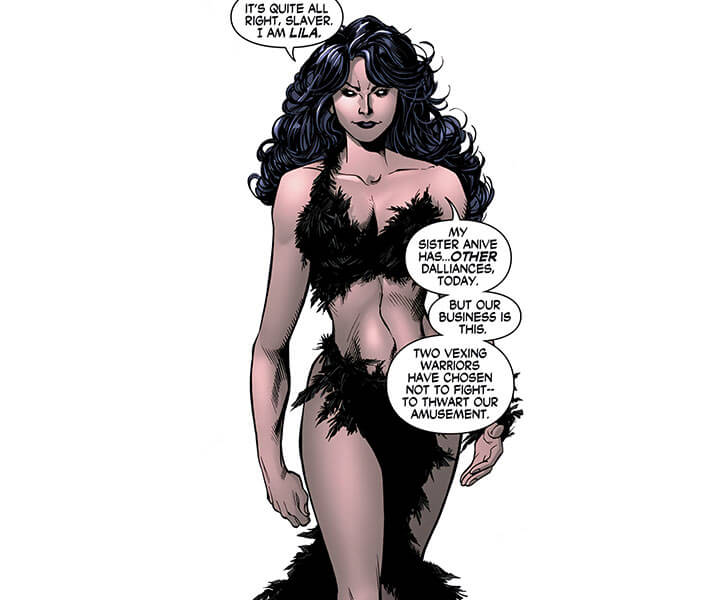 In most cases the Corvidae will things to occur, and gesture. Documented effects include :

The crow-like humanoids the Corvidae summoned arose from the soil in their dimension. Therefore, these may be undead members of the Corvidae’s species.

They also had an emissary — a magical raven called the Mouth of Crows — and this bird mentioned “our young”. This too hints at a species of shapeshifting corvidean monsters related to Lila and Anive, but who aren’t immortal magicians.

One specific crow-like humanoid, named Karse, was a champion (and perhaps general). He was about three metres tall, and was at least as good a fighter as Conan the Cimmerian. Which takes a lot of physical oomph – just try it and see.

A nice orchestral and choral cover of what might be the most famous Conan musical epic theme.

(The first 12 seconds are silent.)

The Corvidæ have allegedly been alive for thousands of years.

Though the two powerful sisters experienced much in their time, they grew blasé. Over time, they were left with only one real reason to live – gambling, and then only over blood matches.

The Corvidae thus organised many duels, skirmishes, battles and wars. For their excitement, they sought combat that involved the most carnage and the most pathos. They were also collectors, lining their nest with all sorts of war-related curios, relics and treasures.

(One sister mentions “a rock used to commit the first murder” as one of their collectibles. If it’s Cain’s, this *might* mean they have ties with the Dreaming. But of course, it might be the equivalent from another world. In any case, the Corvidae’s nest likely holds significant artefacts from multiple realities.)

The greatest warriors of this or any age

Eventually, the Corvidae decided to set up the coolest and most exciting death duel they could think of: Wonder Woman (Diana of Themyscira) vs. Conan of Cimmeria (son of Conaldar).

So things would be interesting, Anive arranged to take away Wonder Woman’s powers and memories before whisking her to Conan’s world.

But things did not go smoothly. The main x-factor is that Conan’s world had an otherdimensional echo of Diana, named Yanna.

Yanna and Conan had become bound by puppy love when they were children. But she had apparently been killed when she and Conan were about 12, after she ran away from her clan.

Thus, when Conan ran into an amnesiac woman who looked and stood like Yanna, he thought she might be his childhood love. While the situation was creepy at first, the gruff Cimmerian eventually told his and Yanna’s story. He and Diana became friends.

This derailed the whole “fight to the death” thing. Diana and Conan repeatedly escaped from situations meant to force a conclusive fight, to the Corvidae’s furore. 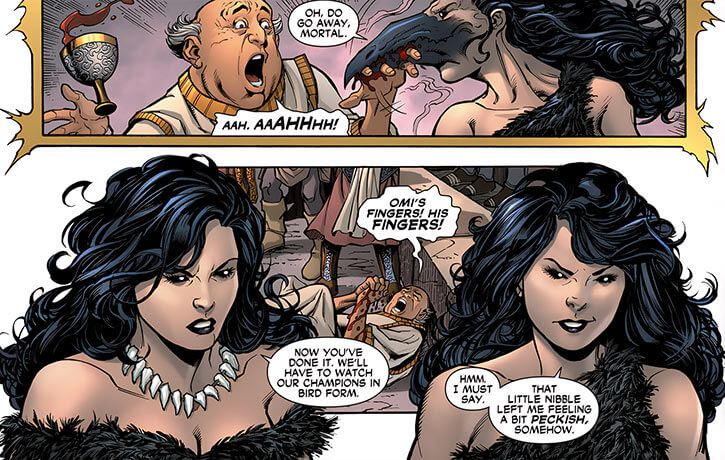 Not only did the pair keep collaborating and escaping, but Diana’s mum Hippolyte located her using a magic mirror. A commando team of Amazons slew a Corvidae emissary, then barged into Conan’s world to rescue Wonder Woman.

The Corvidae briefly regained the upper hand by capturing the Amazon unit, and by kidnapping Yanna for leverage against Conan. But the Amazons escaped, destroyed Lila’s eyes, and brought Diana back to Themyscira.

Furthermore Wonder Woman discreetly left Conan her lasso, to help with his next fight.

The furious Corvidae had sworn to destroy the town of Shamar, to punish Conan and Diana for refusing to play their game. Though Diana had left, Conan attempted to save Shamar by himself. Mostly to free Yanna from the Corvidae.

This would have failed. But the Cimmerian narrowly won a duel against a monstrous champion, by using the lasso as his ace in the hole.

At this point Wonder Woman and the Amazon strike team returned, to defend Shamar and get the lasso back. They rallied the town’s population, then smashed the siege machines of the Corvidae’s army.

Though Conan beheaded Lila, Wonder Woman had no blade on her. She thus likely killed Anive by wringing her neck. One can imagine that Anive regenerated the damage, collected her sister’s body and resurrected her. 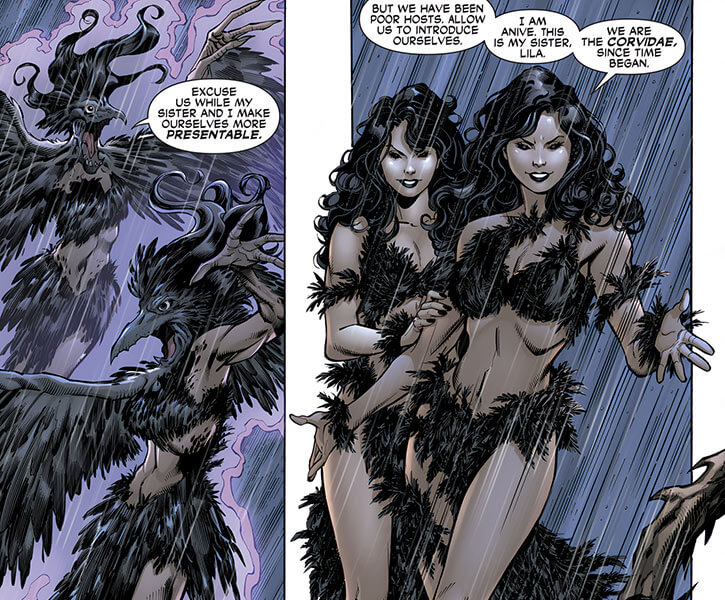 They can appear as ordinary (if large) crows, or as near-Human young women.

In the latter form their skin has an odd pinkish tinge, their eyes are solid black with a white dot, and of course their hair is raven-black. They are clad in a sort of black feathers bikini, presumably for publication purposes.

They can warp their form at will – for instance morphingImpossibly shifting into another form. their face into a powerful, serrated beak to bite something. Usually these are hybrid forms, but sometimes they are monstrous elements just thrown in, such as a giant toothy mouth.

The Corvidae can increase their size. This can be convenient – for instance to carry a person in a giant crow or hybrid form. But it doesn’t seem to augment their strength and durability as much as the size increase suggests.

In humanoid form they looked exactly alike, until the Amazon Philomela took out Lila’s eyes. Lila remained eyeless even in crow or monster forms.

The nest of the Corvidae is a coastal tower in a rain-beaten, dismal land that seems quite dead. 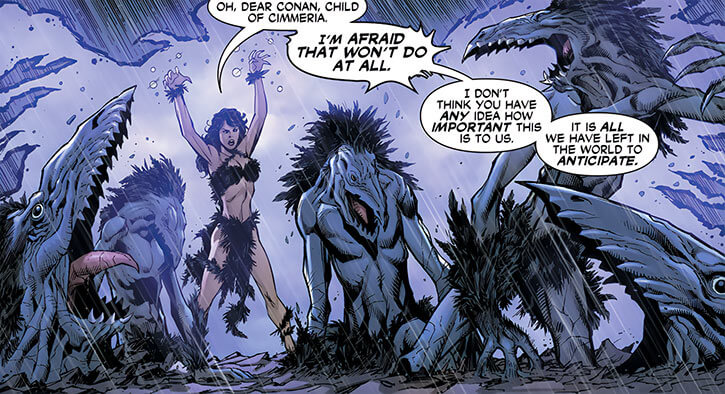 Decadent, bored, cruel, privileged, easily frustrated, and with the maturity of spoiled 15-year olds. All they like is to set up the most bloody, sadistic fights so they can bet against each other on the outcome, and feel excited by the distress and carnage.

About half of their instincts are those of carrion birds. So they like eating bodies (especially the eyes), they like having a big nest with lots of stuff in it, they have fast metabolisms that encourage snacking often, etc..

“If either should die this morn, I win the game, sister. And I claim the giblets.”

“We have lived for thousands of years, children. We have experienced much and seen all. The uncertainty of war. The wager of the blade. That is our sole reason to continue to exist. Brother against brother. Army against army. And the pot of winnings is always bathed in blood. It is the one certainty of your kind. And it is the only sport we truly love.”

“You denied us our pleasures. And the city *will* pay for your obstinacy. But we did what all good gamblers do, Conan. We raised the stakes.”

“Shamar will burn for your impudence ! Every man, woman and child, from the high born to the slave pit. Oh, what a feast we’ll have.” 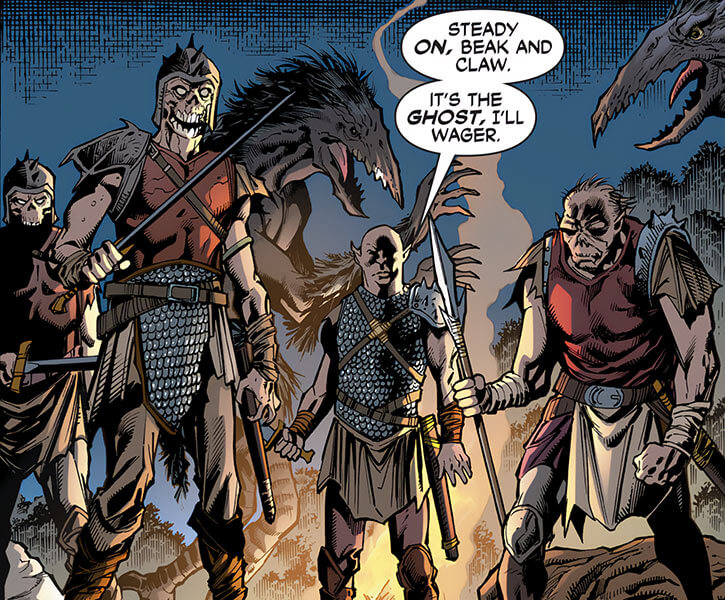 Soldiers serving the Corvidæ – a typical mix of undead, goblinoids and crow demons.

(Both have the same stats for most of the story).

Area Knowledge (Their home dimension, the Dreaming and — as an assumption — several other useful dimensions, such as the one that strips memories and superhuman powers for a while), Immortal, Insta-Change (Crow form), Rank (Major).

MIA toward Cruelty, SIA toward their gambling contests.

The off-panel scrying and intelligence-gathering is probably best-handled as Rituals (with Remote Sensing, Detect…). But we can’t tell since it was off-panel.
Ditto for some minor logistics – for instance, if they enchanted Wonder Woman so she could understand the language in Conan’s world. 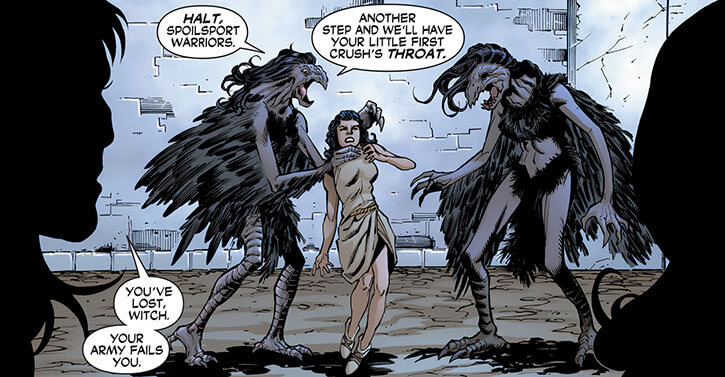 Not a tonne of material, so many stats are speculative.

Their INF and AUR follow the Mayfair convention of boosted third-line Attributes for mystical types.

Since they can morph instantly and as desired, I did not use shapechanging/zoomorphic Powers. They just alter their form to manifest the listed Powers, and their crow appearance is treated as a disguise of sorts (Insta-change).

Animal Mimicry can be considered. But it leads to multiple B&L that bring nothing to the table since they already have Sorcery anyway.

The Rank Advantage allows them to field two battalions (one each), representing the forces they deployed for the siege of Shamar.

On one hand raising this force requires access to their Dimension Travel Power, and perhaps other magics (particularly to raise undead). On the other, they’re the top of the chain of command. So cost-wise, unmodified Rank does the job.

After losing her eyes, Lila simply gains a MPR. This is because she’s doing something that lets her see without eyes. In DCH terms, she’s using a few APs of Sorcery to duplicate sensory Power(s).

Since neither sister cared much about it, it seems likely they were just waiting for Lila’s eyes to regenerate. As far as they were concerned, the main impact was that Lila changed her hairstyle so her locks now covered her upper face. 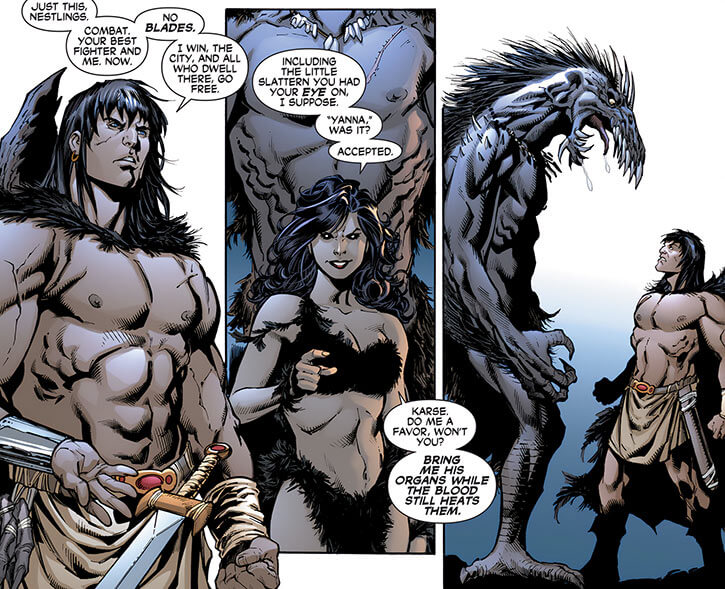 It is difficult to stat these. We see them getting overcome by Conan and a depowered Diana, but both heroes have DEX 08, Weaponry (Melee): 10. And they may have an additional edge when fighting in tandem.

So that leaves quite a space for the monsters’ stats.

Karse would be DEX 08 STR 07 BOD 06, with 03 APs of Growth (Always on, Already Factored In) and Skin Armour (Unarmed and Concussive Descriptors only): 03.

As he pointed out, even a man as strong and ferocious as Conan couldn’t harm him without a weapon.