I’m gonna fight ’em all
A seven nation army couldn’t hold me back.

Heretic was a 1994 video game, using the same technology and gameplay as the landmark Doom. Thus “Doom, but as dark fantasy” was a common description.

Heretic would have three sequels (with two using the title Hexen). Plus spiritual successors such as Ziggurat, Project Warlock  or Amid Evil  .

Corvus is the playable character in two of the four Heretic games. However, this article only covers the original Heretic.

He seems to be more of an irregular fighter and skirmisher than a well-armoured frontline soldier.

He has an unclear level of magical training. That allows him to wield enchanted Sidhe ranged weaponry. It is possible that only Sidhe persons can wield such weapons.

Said magical ordnance hits hard. It allows Corvus to destroy numerous enemies as long as he controls the terms of the battle. They perform much like firearms, in a world that is mostly about melee combat and archery. 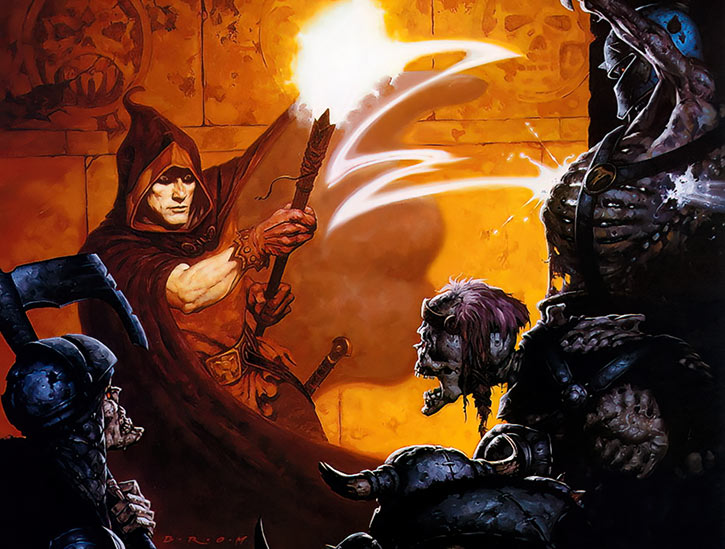 The Brom  art that was used for the game’s box.

Corvus is unarmoured on the box art. But the in-game sprite *might* be wearing a breastplate. It’s impossible to tell since games were so low-res back then.

We observe that Corvus can :

So let’s make something up that represents the video game logicStuff that only makes sense within a video game. in less abstract terms. Say, Corvus has an item (like his belt) enchanted to “eat” armoured objects (shields, breastplates, helms, sabatons…). It uses their essence to power an ablative force field protecting and healing the wearer.

Corvus also moves as fast as Doomguy does. So let’s *assume* magical boots of speed.

Have you ever seen a crow going ape-Sidhe ? 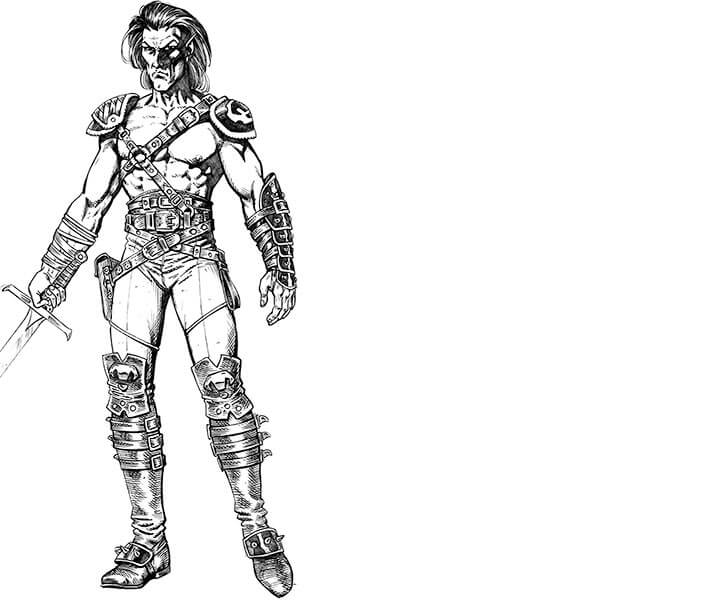 This is concept art for Corvus as he appears in the Heretic II game, so I’m cheating a bit. It was published on the artist’s site – Jeff Butler  , who also did work for TSR’s Marvel RPG.

Bazaar of the bizarre

Beyond weapons, Corvus uses a number of artefacts. These tend to be one-use magical items. Or in me case zero-use, since I’m the sort of player who always thinks they should save their potions for later.

The backstory in the Heretic manual involves a seven-nation army. So it’s not like I have a *choice* here, folks.

However, Seven Nation Army was all the way back in 2003. So just in case – low-fi, almost-punk garage rock with remarkable compositions and a “guts-and-feels-before-technique” performance style with trashy sound.

The Sidhe (presumably pronounced “sheey”) are a secretive but magically adept, Elf-like people. One gets the impression that they’re a small community. The entire population of Sidhe might amount to but a village.

They know of, and seemingly oppose, many mystical dangers. Their greatest enemy would prove to be the Serpent Riders, three brothers who sneaked in from another reality. The Serpent Riders intended to conquer, enslave and destroy many worlds in their new dimensionOther realms of existence that are not our universe..

(The nature of the Serpent Riders isn’t clear. They could easily be related to other transdimensionalSomething that goes across two or more universes. menaces, such as Chthon in Quake or Baphomet in DooM. Or heh, they could be Sheeda).

The youngest Serpent Rider came to the Sidhes’ world. Using spells against which only the Sidhe had protections, D’Sparil enslaved this worlds’ realms.

A seven-nation army was thus assembled, to come destroy the Sidhes’ land. The seven kings of the earth and their people now were devoid of will and soul, only serving D’Sparil.

The Sidhe were now called Heretics. Since they were the only ones not following the Serpent Riders.

The Elders of the Sidhe wove powerful enchantments over seven candles, making them symbolic of the seven armies arrayed against them. Then they snuffed the candles, obliterating the armies.

But this created magical pathways between them and their targets. D’Sparil and his Order of the Sign wizards had been ready for this. Riding the pathways, a horde of evil things manifested within the very sanctum of the Elders.

Knee-deep in the dead

Most Sidhes were slain that day. Survivors, their spirit broken, fled to hide. However, there was little doubt that they would eventually be hunted down by the near-dead and undead.

But one Sidhe instead made his way East, over extinction-shrouded land. Corvus was determined to face and destroy D’Sparil himself.

(“Corvus” is Latin for “raven”, incidentally).

The Serpent Rider’s headquarters, the City of the Damned, had once been the Sidhe city of Silversprings. Thus, there might still be weapons there for Corvus to use against the invader.

Here’s the game’s first level, available in 4K because why not.

This footage was done using the Doomsday Engine  with the neural network texture pack pack  as of its May, 2019 release. Obviously, this means a much stronger image quality and modernised gameplay.

The settings are near defaut, but with the hud-fov-shift variable adjusted for an UWD screen  (if only to lessen motion sickness).

There’s another textures pack, the JHRP, which is easily found on the Doomsday Engine site. I prefer it, but the AI upscale textures are closer to the originals. And since the goal here is to show what Heretic looks like…

The Serpent Riders could be tied to practically any mystical threat, such as Mordru or Dormammu. 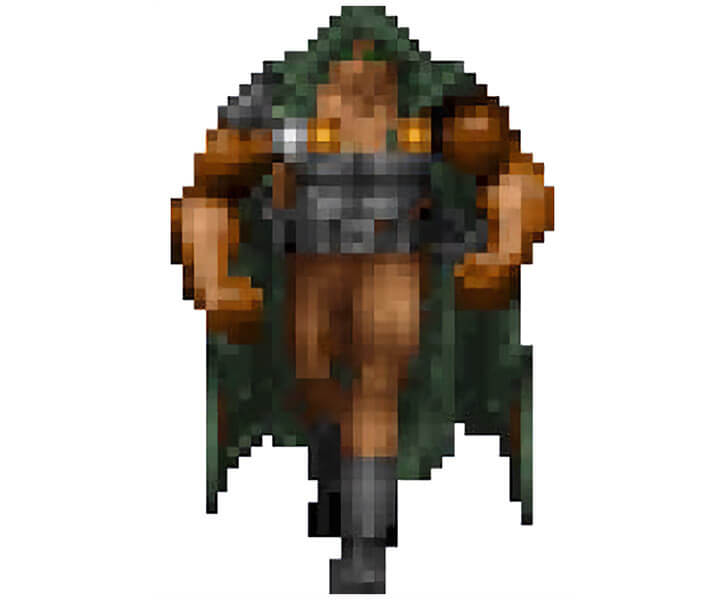 The sprite for Corvus as it appears in multiplayer. Look, it’s a very old game.

Avenger of the Sidhe.

For this modelisation I’ve decided to drop Ammo scores, in favour of high-ish R#. It’s easier to keep track of, and we can just assume that the Heretic resupplies by grabbing new weapons rather than by finding ammunition randomly laying about.

It also better matches the notion that these are ancient weapons that have been around unmaintained for ages.

The above only represents Corvus’ early weapons. The more advanced weapons follow. I’m treating the “power up” version as a different weapon.

In the game they are instantly picked up and added to the inventory. Then the selected item is used with just one keystroke.

In a slower-paced RPG environments, Occultist (Identity artefact) rolls might be necessary.

The third-line Attributes have been highballed since, as Nightshade would put it, “he’s a magic dude”.

The standard weapon is less powerful than the Doom pistol. It takes markedly more shots to down a low-level enemy with the baseline elven wand than to down a zombie with the pistol.