Versions of Cosmic King seen after the 1994 reboot aren’t covered here, though.

Cosmic King has powerful transmutation abilities. These are similar to those possessed by natives of Trom. Therefore, he can sense (in DC Heroes RPG terms, Detect) and change (Transmutation) the elemental composition of objects. Most often, he uses this power to change one element to another.

Cosmic King is able to create solid objects by transmuting gasses in the air into other forms. For instance, he can manifest solid walls out of mid-air or turn air into cables (Matter Manipulation).

The limitations of his abilities are unclear. But in DC Heroes RPG terms, Matter Manipulation cannot produce objects with Powers. The only exception are Powers determined by the particular element or material from which the object is made.

For example he could not create a boat with Swimming, but could turn cloth into asbestos to give it Flame Immunity. GM discretion is needed, but guidelines are similar to those given for the Transmutation Power in the rulebook.

It’s not known if he can transmute living beings. He’s never been so ruthless as to try to transmute an opponent directly. However, a reputed future version of Cosmic King was able to transmute his own flesh into various elements or compounds (Molecular Chameleon).

Cosmic King is a fairly skilled scientist and gadgeteer . He managed to create a Transmutation Beam (Scientist, Gadgetry, Scholar, Stroke of Genius). Furthermore, he is familiar with spacecraft (Vehicles/Space).

Cosmic King was born in the latter half of the 30th century. He is a native of the Terran colony on Venus. Science Police records indicate his real name is Laevar Bolto, though he has never been heard to use any name but Cosmic King.

He was a gifted scientist whose discoveries offered great promise to his people. But prejudice, fear, and a desire for revenge and for power have transformed him. From a potentially great benefactor, he turned into a powerful supervillain.

Why I hate Venus

Venus is a small colony, inhabited by a splinter culture of humanity. Venusians are largely isolated from the mainstream of human society. It was originally colonized after exploratory missions in the 21st century by a legendary figure known only as “the Unknown Spaceman.”

The founders of the Venusian culture apparently sought refuge from an increasingly interplanetary and interspecies galactic culture.

This opportunity to create their own society was enticing enough that they were willing to brave Venus’ tremendous temperatures (lead melts on the planet’s surface) and inhospitable atmosphere (mostly Carbon Dioxide with a bit of Nitrogen, with atmospheric pressure 90 times that of Earth). Not to mention a local “day” that is about 240 Terran days long.

When the Terran colonists found that Venus is home to some extremely violent and adaptable wildlife. That included the dangerous gyrak-tyu, the octopus vine, the hopper, and the vicious sneep. This discovery reinforced their hatred of all things non-Terran.

Venusians have developed an almost pathological distrust and hatred of anything not readily recognizable as a product of Earth’s ecology. They particularly dislike things which seem at first to be Terran but are truly not. As such, shapeshifting, transformation, and transmutation are considered evil on Venus.

Laevar Bolto was born into this climate, during a time when the Venusian colony was struggling to remain viable. The colony requires tremendous amounts of energy to maintain the domes and caverns which shelter the human population from the harsh environment. Energy and other resources (especially water) are imported at great expense, or are replicated, further depleting energy reserves.

A burgeoning population had stretched the resources of the colony even thinner. The cost of creating additional housing for the growing population appeared prohibitive.

Bolto became a scientist. He was engaged in creative research which he hoped would provide the answer to his planet’s housing and energy crises. As a scientist, he considered the prejudices of his society foolish, and saw his transmutation research as offering the potential to cure all of Venus’ ills in a single stroke.

Rare fuels could be created via transmutation, waste could be turned into water, bare earth and rock could be transmuted into empty space and building materials, carbon dioxide could become oxygen. The possibilities were limitless.

Disregarding his culture’s taboos, Bolto performed forbidden experiments. He succeeded in building a transmutation ray that could alter any object’s atomic structure.

When the prototype appeared to be a success, Bolto continued his experiments. He sought to increase the power of the ray. Unfortunately, one transmutation resulted in the release of a hallucinogenic chemical. It caused Bolto to stumble, passing out, into the path of the ray.

When he awoke, he found himself possessed of the powerful transmutation abilities he’d sought to perfect in his device.

Bolto was confident that his success and the infinite possibilities it offered would win him acclaim and position among his people. Therefore, he presented his discoveries to the Ruling Council on Venus. But he had underestimated the strength of his people’s pathological hatred of the strange and unknown.

Refusing to consider the many beneficial applications of the ray, the Council informed Bolto that transmutation was evil. And since he was now a living transmutation ray, he could not be permitted to remain on the planet. The Council destroyed Bolto’s research and his laboratory. Then they exiled Bolto permanently from Venus.

Shocked and angry, Bolto found things little improved when he left Venus for Earth. The Science Police were automatically suspicious of him as he was an exile, considered a “criminal scientist” by his home government.

Moreover, he found that there were strict laws concerning his immigration and travel rights, because of the potential of his power to destabilize entire economies. (Element Lad of the Legion of Super-Heroes, who possesses similar powers, is only allowed to live on Earth and travel freely about the UP because of his home planet’s destruction and his own agreement to use his powers only in the course of Legion activities.)

Infuriated by such treatment, Bolto decided to turn his powers to his own ends. From there he was easily recruited by agents of the Legion of Super-Villains. He took the name Cosmic King. That was a sort of one-upmanship over Legion of Super-Heroes founder Cosmic Boy, a typical pattern among LSV members.

From Cosmic King’s viewpoint, he first clashed with the LSH in 2985, right after he was exiled from Venus. He took part in the LSV’s conquest of Orando, the homeworld of retired Legionnaire Queen Projectra.

After the LSV was defeated, he was imprisoned on Takron-Galtos, the prison world of the United Planets. Presumably he was evacuated along with the rest of the prisoners when Takron-Galtos was destroyed during the Crisis on Infinite Earths. The new prison was located on Labyrinth.

However, this was not the LSH’s first encounter with Cosmic King. During the first few years of the Legion’s existence, during the 2970s, they repeatedly encountered adult members of the LSV claiming to be from the Legion’s own future. One of these adult LSVers was Cosmic King.

Along with an adult Lightning Lord and a woman calling herself Saturn Queen, Cosmic King fought both the youthful LSH and Superman on multiple occasions.

In the last such encounter, the three adults were defeated by the LSH and turned over to the Science Police. En route to Takron-Galtos, the three simply vanished. Perhaps they returned to their own time, though this cannot be confirmed.

Cosmic King is a moderately tall man with dark hair and blue eyes.

He wears a costume patterned after Cosmic Boy’s original costume, but reversed, mostly magenta and black rather than pale scarlet and white.

Cosmic King seems to have a fairly commanding personality and a high degree of arrogance. He’s a fairly one-dimensional villain.

Later retcons play up the idea of him being Cosmic Boy’s opposite number, making him highly charismatic and a very effective leader and strategist (if not necessarily a great tactician).

“I’m please you’ve heard of me, Element Lad, since I have so recently been banished from my native Venus.”

“We are the Legion of Super-Villains, from the future… foes of the Super-Hero Club ! Superman, for your many brave and worthy deeds, we vote that you be executed !”

Nothing special is needed, really. He’s integrated pretty firmly into the pre-Crisis Legion of Super-Villains, but can be used anywhere.

One interesting idea is to play with the temporal anomalies that surround him and other LSVers like Lightning Lord and Saturn Queen. Their status as time-travelers and their history of showing up in timelines that are not quite their own means they can show up anywhere and anywhen, as seen in the recent Batman/Superman comic book.

Thus, they may also be agents of Glorith or the Time Trapper (or the Lord of Time, Extant, Mordru, etc.).

Equipment:
As a member of the LSV, Cosmic King has access to purloined technology from the LSH, notably a Transuit and some form of anti-gravity flight technology (probably either a Flight Belt or an early model Flight Ring). He has some form of communications technology as well, a telepathic earplug or perhaps a simple radio. See the LSH Equipment writeup for details.

During the first few years of the Legion’s existence (the Adventure Comics era), they repeatedly encountered adult members of the LSV claiming to be from the Legion’s own future. One of these adult LSVers was Cosmic King, an older man than Cosmic King has yet become.

Temporal anomalies surround these episodes, but it seems likely that these were indeed visitations from Cosmic King’s future self.

For this version of Cosmic King, his HPs rise to 65, DEX and INFL rise to 07, Initiative rises to 021. He also possesses Molecular Chameleon: 14 (needs no material to copy), and Sealed Systems: 10, but only when Molecular Chameleon is active.

A Pawn Becomes a Cosmic King

The alternate timeline known as the “Five Year Gap” made some significant changes to Cosmic King’s backstory.

Laevar Bolto’s transmutation ray gave him superpowers, but it also unhinged his mind. That set him to cultish Mordru worship, drug use, and criminal tendencies. Eventually, he hooked up with Tarik the Mute, who was trying to put together a Legion of Super-Villains. They used his charismatic personality and drugs to attract recruits.

Behind the scenes, he helped found the group, and he became known as Cosmic King. He managed to retain his Venusian citizenship until 2984, when his cover was blown and he was banished. He then joined the Legion of Super-Villains openly. Bolto has been involved in all their schemes thereafter.

For this version of Cosmic King, raise HPs up to 60, as he’s been operating (in secret) for a much longer time than in the original timeline. He also gains Leadership, his Will and Infl rise to 06, Aura and Spi to 05, and Init to 018. He also gains a High level connection to Mordru cultists.

I used the Detect power to represent the ability to sense the presence of elements and compounds within particular objects. It doesn’t really have much in-game play and may be deleted without a problem. 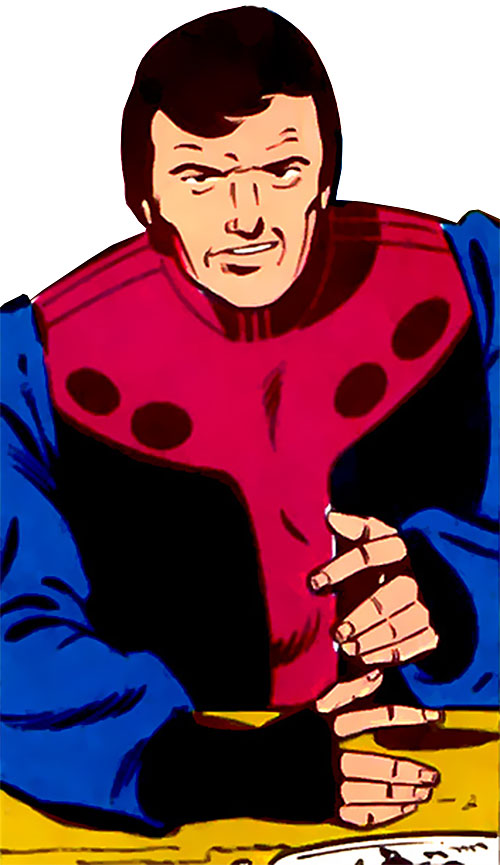 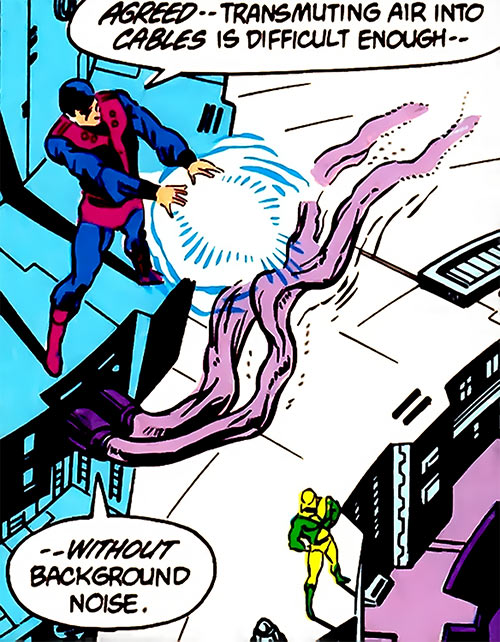