Cosmo is a high-level telepath. He further has the ability to create defensive shields wide enough to block a corridor and strong enough to deflect energy blasts. He can also project mind blasts of tremendous force.

The level of his powers has yet to be revealed, but Cosmo has proven himself to be powerful enough to take on a being such as Adam Warlock single handedly, and strong enough to unleash a telekinetic blast potent enough to disable two teams of super beings.

In addition, Cosmo has access to all of Knowhere’s technology (which he seems to understand) and information resources when he needs it.

We’re on a road to Knowhere

The knowhere station is an interdimensional place, a nexus, adrift in the rip, the outer edge of space-time. The station itself is, in fact, the severed head of a giant Celestial and equipped like a full city. Nobody knows how it came to be.

Its continuum cortex provides rapid transit to anywhere in the universe via passport bracelets. The station monitor has superior detection machinery capable of pinpointing cosmic anomalies and many other things.

Because of the rip, all space and time, and all dimensions of reality, meet there. In another decade or so, it will pass beyond the cosmic threshold and disintegrate. In the meantime, people of all species come there from all space and time to study and to inspect. They come to observe the end of universe from the closest available platform, and so Knowhere is a scientific community.

It is quite the community of alien delegates they have on Knowhere, and the rules are set by a governing council. The central area is occupied by a marketplace and there is also a a sickbay. And Cosmo, as the chief of security, is top dog.

Cosmo also works as the liason for the new Guardians of the Galaxy (rotating members: Peter Jason Quill aka Starlord, Gamora, Phyla-Vell aka Quasar, Drax, Warlock, Mantis, Rocket Raccoon, Major Victory and later Jack Flag and Bug) since they keep quarters and a control station on Knowhere.

He also gets the team members passport pre-positions to wherever they need to go.

Not much is known about Cosmo’s origin other than he appears to be a space dog from the Soviet Union, Earth. He is said to have gotten lost in orbit sometime in the early 1960s and somehow ended up at the edge of the universe.

Heading up the security forces in a place called Knowhere, Cosmo met a distraught Nova shortly after he witnessed a female alien with the alias Suspensor turned into a zombie right before his eyes. She attacked, and Nova accidentally killed the woman in self defense only to have her allies Cynosure, Crater and Discharge blame him for her death.

Unable to battle the three powerful aliens, Nova retreated and was surprised yet again with his discovery of a talking dog. However, Cosmo gained Nova’s trust and friendship, and the two set out to find the fiend responsible for all the recent deaths on Knowhere.

A dog and his boy

Cosmo brought Nova up to speed on when the events started, and Worldmind added any data he had at his disposal. Cosmo was mainly concerned with the safety of the remaining citizens of Knowhere who were safely hidden away in a Dimensional Envelope he wore on his collar.

It wasn’t long before Cosmo and Nova were ambushed by more zombies. These included the surviving members of Suspensor’s former team, the Luminals. They determined that the creature known as Abyss was behind the mayhem. 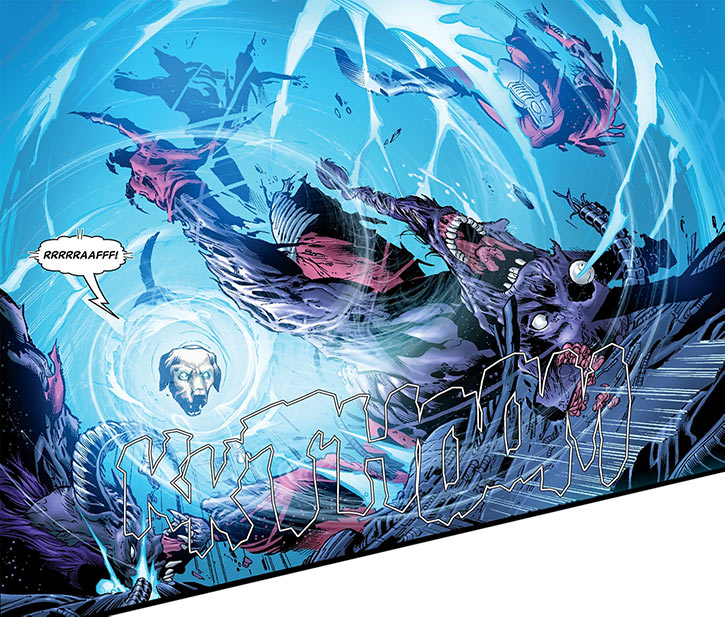 Together, Nova and Cosmo fought off the attacks, sealed Abyss inside his prison, and brought serenity back to Knowhere. As a final parting gift to Nova, Cosmo charted a course to the birthplace of the Phalanx, Kvch. His hope was that Nova could find a way to cure himself of the “transmode virus” that was slowly killing him.

Just when Cosmo thought that peace was restored, alarms were triggered when a murderous Gamora and Drax — now under the control of the Phalanx — slaughtered many innocents on Knowhere in their pursuit of Nova. Cosmo arrived too late to stop them before they could follow the same path as Nova through the Continuum Cortex.

Recently, Cosmo has become the liaison to the new Guardians of the Galaxy. He assists them in plotting courses for the trouble-spots in the universe.

However, Cosmos’s loyalty to the group came into question after a group of terrorist Skrulls were found aboard Knowhere and destroyed the Continuum Cortex. Cosmo was protecting a group of Skrulls who were trying to escape persecution from the Skrull fanatics that were waging war on Earth. Adam Warlock accused him of being a traitor.

Cosmo forced Warlock to see the truth as he did with Drax and Quasar. Unfortunately, things became more complicated when Cynosure led the Luminals in attacking the Skrulls, and Cosmo was again forced to defend them.

Cynosure almost blindsided Cosmo with an energy blast from her baton, but a Skrull threw himself in front of the blast to save Cosmo. In his rage, Cosmo unleashed a massive telekinetic blast that disabled both the Luminals and the Guardians of the Galaxy. Once both teams came to, Cosmo apologized for any confusion he caused.

The peace on Knowhere was short-lived as war broke out between the Kree and Shi’ar. The Guardians found themselves in the middle of it in order to protect the very fabric of the universe.

Unfortunately, failed negotiations with both sides and a temporary alliance with the Starjammers, brought the Shi’ar Imperial Guard and the Inhuman royal family to Knowhere, leaving Cosmo and the others to defend his home.

In the midst of the attack, a being calling herself Starhawk abducted Star-Lord, Jack Flag, Mantis, Bug and Cosmo to her future. In that future, the Guardians saw the destruction of the universe caused by the War of Kings. The only individuals left alive was a conglomeration of heroes calling themselves the Guardians of the Galaxy, and the foul warrior race known as the Badoon.

Upon discovering it was none other than Black Bolt himself who was the cause of all this destruction, the Guardians attempted to send a message back to their present using another Celestial to talk to Knowhere. 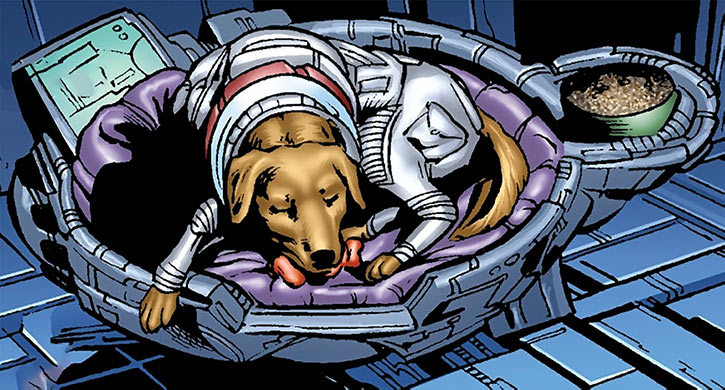 The Badoon had somehow enslaved the remaining Celestials and used them as a cage around the sun in order to prevent the last vestige of the universe from dying. Infiltrating this “Celestial Engine”, Cosmo spoke to one of the Celestials who, in turn, relayed the message to Knowhere.

The message came too late, for Black Bolt had detonated his weapon of mass destruction and created the Fault that would one day destroy all life. The future and Cosmo’s role in it remains to be seen.

Cosmo is a Soviet dog in a white space suit. To be exact, he is a rather pretty golden retriever/labrador cross. The helmet is often kept open and the letters CCCP are clearly visible on the suit. His paws and tail are unprotected and the suit has a red collar, which contains his dimensional envelope device.

When Cosmo employs his powers his head radiates a blue, wavy sphere and his eyes turn completely light blue. When relaxed, Cosmo wags his tail and pants happily with his tongue out.

Cosmo has a good nature. He is clearly guided by canine instincts and enjoys the same things a normal dog does, such as playing, chewing bones and being petted. He is fully aware of how odd he appears to humans, and likes to joke about his dog status.

He easily befriends humans, such as Richard Ryder and Peter Quill, but his instincts do not trust Rocket Raccoon. 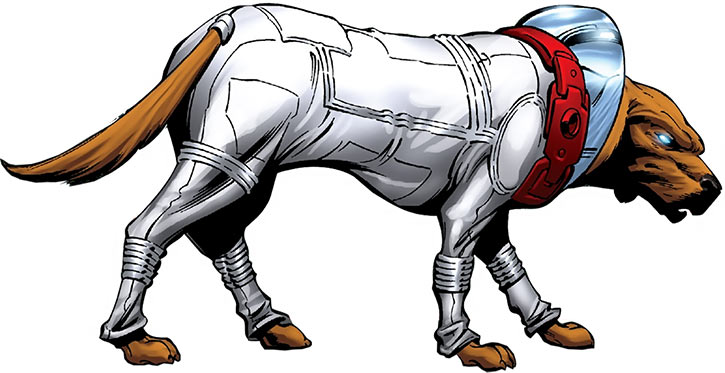 Although telepathic he speaks English with a strong Russian accent. Even if afraid he will help out because he cannot help it: he is man’s best friend. He is so interested in newcomers that he combs their surface thoughts. This is instinctual and he cannot help it even if he knows that’s it’s a breach of privacy.

This, however, has the advantage of making him aware of most things happening on the Knowhere station. He seems eager to protect humans like a guardian dog, but will reluctantly turn tail if the odds are overwhelming.

In emergency situations he is quick to take command, and instruct everyone to their positions as well as heading to the hotspot himself. He is very careful not to hurt anyone needlessly, but will knock everybody out (using HPs) if the situation gets out of hand…. Good dog!

“You have seen end of universe, and met space zombies, and talkink dog is what freaks you out ? Bozshe moi.“

“Honor to meet man who pull Annihilus’s heart out through his mouth. Me, I would have gone for throat, but then I am dog.”

“Fine. Just be makink sure Cosmo not have to come back here and kick your butt off Knowhere.” (Cosmo even growl at him little bit to make him understand Cosmo mean business).

“Come on then, ugly zombies, if you think you can bite harder than Russian dog.”

“This is Continuum Cortex. Built into brain stem of Celestial. It is nexus point to anywhere and anywhen in the universe. It is from here we travel. Cosmo has taken liberty of plottink course to world Cosmo believes comrade Nova should visit. Kvch. The Technarchy homeworld. Birthplace of Phalanx. This passport has been preprogrammed with transit vectors. Let adept fit it to your wrist. It will guide you, comrade.”

“So, Cosmo press transfer button and —- zoom ! — off they go ! Sometime, Cosmo hope to join them and share in fun and adventures.”

“Back off ! Cosmo very cross ! This is beink serious breach of public order ! Cosmo has good mind to throw you all in slammer !” (a fellow is killed) “That does it. That enough. No more Mr. Nice Dog. Now Cosmo will hurt everyone !” [knocks everyone out telekinetically] 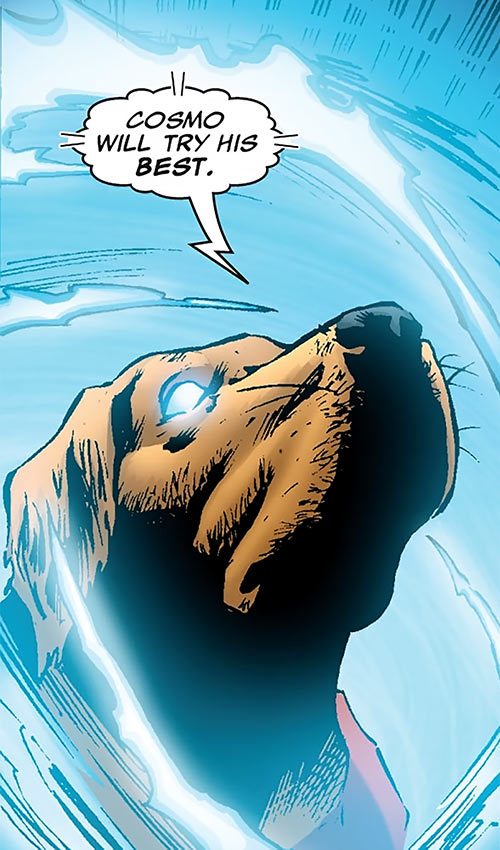 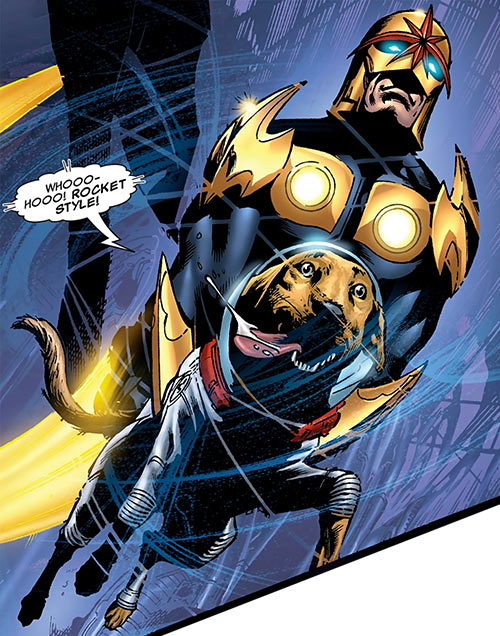 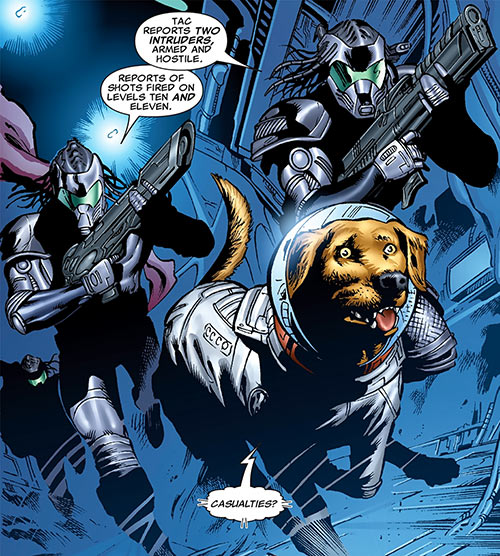