The Cossack is a large and strong man, who can punch real hard. But he’s no match for Daredevil in a fight.

He presumably has espionage skills. And he might speak other languages than Russian and English.

The Cossack is an ex-Soviet intelligence agent. He had to flee the country and go freelance during the Cold War – presumably around 1980.

In 1985, he procured an experimental weapon from Eastern German defector Dr. Hermann Shreck, which he planned to use in the US for profit.

In New York City, the Cossack approached Black Widow (Natalia Romanova), apparently in the mistaken impression she’d join him as an accomplice. When she refused, he used the machine to blind her then defenestrated her. But she survived with Daredevil’s help.

Based on the Widow’s information, Daredevil realised that the Cossack would strike an airport (to blind air control and pilots). And that he would likely use his machine even if the city met his demands for a $15M ransom. Though most people on ground level already had been blinded, Daredevil made short work of the Cossack and his men, and prevented untold casualties.

The strange headgear in the second picture is not part of his costume. It was specialised equipment to protect himself from the effects of the blindness machine.

A big guy who lives by his impulses. He’s :

He’s a very simple and direct guy, who’ll happily defenestrate his opponents or promise diamonds to women. He seems the kind to spend all of his money in various pleasures before he has to launch a new extortion or mercenary scheme. In many ways, the name “Cossack” does fit.

His English is a bit mangled. He likely has a strong accent.

He’s overconfident and unfurls his plans as if they were the simplest, most straightforward thing in the world, without bothering with subtlety in the least.

Equipment:
During his sole appearance, Cossack and his men deployed a MACHINE [BODY 06, Sensory block (Visual): 15 (Area of effect 5 APs), R#03, Limitation: Only affects sight]. They had special headgear that made them immune to the machine’s effects.

The skills are not demonstrated in the story (except perhaps for Martial Artist, and even that is hazy). So I and Nick picked a few probable ones. 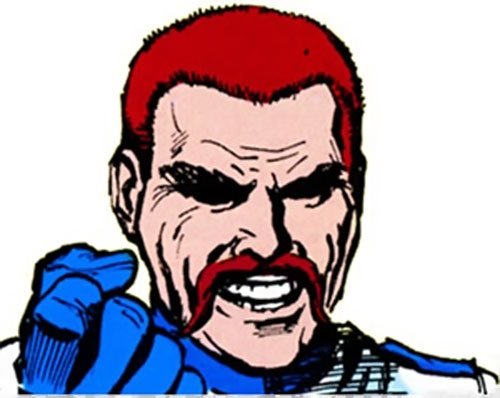