Cottonmouth is in excellent physical shape. He is an above average fighter, able to take on multiple mooks at once in a brawl. He’s not very hard to knock out if hit with sufficient force, though.

From one of his remarks, I assumed that he had a military background. Standard military Skills have been added to his game stats, but have not been clearly demonstrated.

Not your average jaws

His main ability is that his teeth have been replaced with steel. Furthermore, his jaws and neck have been bionically enhanced and specially hinged. Thus, he cas open his mouth wide enough to bite off an human head or put an entire basket ball in. The canines are also visibly elongated.

His bionic jaws are strong enough to crush cinder blocks or deform iron plates. He can hang by the teeth to, say, a rope for an hour before he begins to tire.

While Cottonmouth is adept at biting in combat, his jaws is even more useful as an intimidation weapon. Seeing him grin and/or yawn is quite unnerving. He sometimes wears special contacts which make his eyes completely white in order to reinforce that effect.

Clemens can feel pain through his bionic jaw – for instance if he breaks teeth biting a very hard surface. This is not as painful as with an organic jaw, however.

Burchell Clemens hails from Mobile, Alabama. He was active in the Southwestern US as the criminal Cottonmouth, though nothing is known about his early career. Clemens attended the business meeting for snake-themed super-criminals which created the Serpent Society.

When the Society started its sales pitches toward major criminal concerns, Cottonmouth accompanied Asp to invade the Kingpin’s building. They knocked out a dozen gunmen so Asp could do the pitch and hand out a business card to the crimelord.

Cottonmouth has been quite active with the Society, fighting Captain America on several occasions. He also was on the kill team that brought MODOK down. Though the fatal wounds were inflicted by Death Adder, Cottonmouth severely wounded and restrained Modok with his bite.

Coup and other alarums

During the Viper’s takeover, he initially fought for Sidewinder (Seth Voelker) but switched sides as defeat loomed closer. He even tried to kill a supporter of Sidewinder, Diamondback (Rachel Leighton), to prove his worth.

Clemens was reintegrated within the Society after the eventual failure of the coup. There had been too many traitors to punish them all, and the Society needed manpower after Ghaur and Llyra contracted its services.

Cottonmouth was still a member in good standing of the Society after its manager Sidewinder left. He saw the new leader, Cobra, rename himself King Cobra as he asserted himself after defeating his old partner Mister Hyde.

Clemens was later part of the jury for the trial of Diamondback when she was judged for her involvement with Captain America (he voted for her death). When Diamondback’s friends (the future members of BAD Girl, Inc.) rebelled against King Cobra, he opposed them but was defeated by their ally Captain America.

Cottonmouth’s then started working solo. This may mean that he distanced himself from the Society.

He was among the minor supercriminals hired by Erik Killmonger via Nightshade (Tilda Johnson) to kill the Black Panther (T’Challa). The hit failed as a number of allies of the Panther unexpectedly popped up. As a result, Cottonmouth was imprisoned at the Seagate Federal Penitentiary, off the coast of Georgia.

About 18 months later, his prisoner transfer (which he shared with Hawkeye, Plantman and Headlok) went wrong when a earthquake triggered by Graviton threw the transport from a cliff. 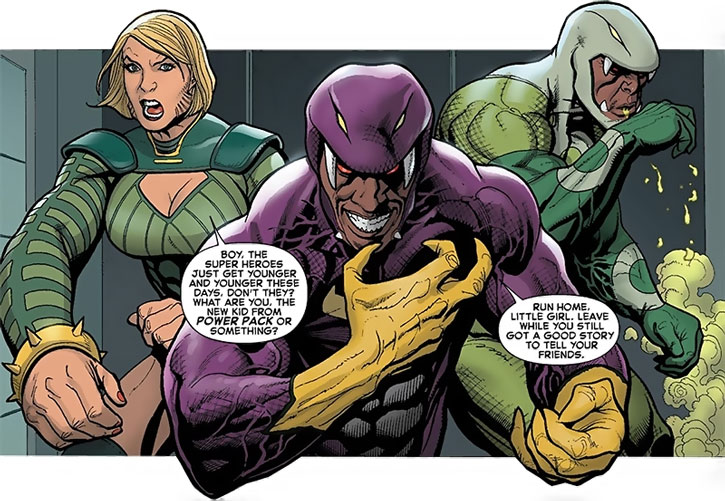 The four prisoners escaped, but their high-tech manacles forced them to operate together. They reluctantly cooperated, but things did not go well. They also accidentally killed a Guardsman while resisting arrest.

Cottonmouth, never a deep thinker, decided to bite off the manacled arms of the other three fugitives as they slept then leave. He chomped on Plantman’s arm (who soon regenerated it), but Hawkeye woke up and beat Clemens up. The chain gang then decided to work for Hammer interests in the hope of having the manacles fully deactivated.

The four fugitives were stopped by Songbird, who rescued Hawkeye and Plantman and had S.H.I.E.L.D. take custody of Cottonmouth and Headlok.

In 2009, Cottonmouth attempted a bank job in Phoenix, Arizona. It didn’t work. Cottonmouth put a half-dozen guards in the hospital with nasty bites, then was forced to flee when the Desert Stars, the Arizonan team of the Fifty State Initiative, responded.

Clemens reached the borders of the Navajo Nation, slipping out of the United States’s jurisdiction. He took a little girl hostage to ward the tribal police off, killing several dogs in so doing. That didn’t work either – the reservation police sent American Eagle (Jason Strongbow) after him and Cottonmouth was soon captured.

Strongbow had Clemens do some forced labour (starting with digging graves for the dogs). But he apparently let him go after he’d made himself useful since no Navajo person had been harmed by Cottonmouth.

A few months later Cottonmouth was reunited with the Serpent Society for an operation of an undisclosed nature. The Society was stopped by the New Avengers, with Cottonmouth fighting Wolverine.

Clemens was apparently back full-time with the Society, as he also was on the contract to capture the Ranger Marcus Johnson, and during the 2012 bank heist where the Serpents accidentally ran into Hope Summers and were arrested.

When not in costume, McIver dresses to intimidate – shaved head, sleeveless shirt exposing his musculature, mirrorshades and “enhanced” metallic smile.

Cottonmouth is the strong, silent type. He prefers to let his colleagues talk, and if he has something simple to express (such as “don’t move”) will prefer to make a gesture. Besides, his mouth will be busy whenever he fights somebody he intends to wound or kill.

He doesn’t overdo it, though. When he does speak, he sounds serious and professional, and he will give orders if necessary. He seems to have some level of natural authority and will be the one in charge if no senior member of the Society is present.

Cottonmouth is proud, and he’s a killer – especially when fighting somebody who previously injured his pride. Unless there is a reason to go less-than-lethal, he will aiem to kill – often trying to bite the head off his foes, though he seems to occasionally aim for the wrist.

He generally favours the most brutal way out of a problem, and he always is looking out for number one. He likes to be feared, and seemed to grow increasingly vicious underhanded as time went by.

“I claim the right to kill [Captain America]. For what he did to me in the fight with Modok — I want to bite off his head !”

“Rush him from all sides ! Tear him limb from limb !”

“That wound looks like it was caused by an explosive bullet.”

Equipment:
BIONIC JAW [BODY 09 STR 09, Charisma (intimidation): 04, Limitation: since STR is limited to the JAW, its effective APs for Wrestling and Grappling purposes is but 06. Note that Cottonmouth feels the pain through his JAW – for instance if he breaks his teeth on a very hard surface – though it is not as bad than if it were an organic jaw – it’s painful but he’ll recover within one or two Phases]. 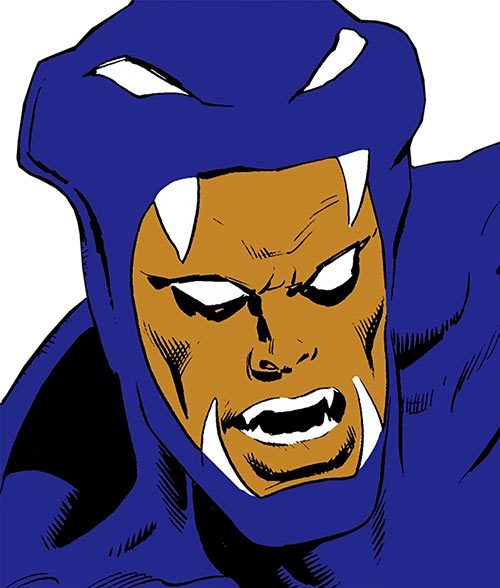 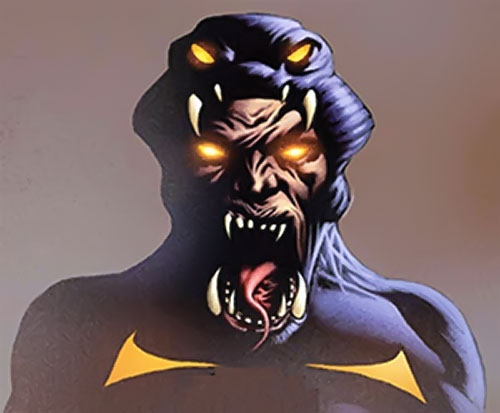