It is a classic large criminal conspiracy, in the vein of what you’d see in 1970s American thriller movies.

This profile chiefly exists for GMs who need an authentic ready-to-use, old-school criminal organisation. One without costumes, super-weapons, high-tech HQs, combat cyborgs, superhuman enforcers. And all those other things more modern criminal concerns now have in super-hero comics.

This entry doesn’t repeat material wot’s explained in the Nemesis character profile. It is thus best to read this here entry after said profile.

Apparently formed in the 1970s, the Council was an alliance of powerful mobs from across America and beyond. Much of the Council rested on individual alliances between mob leaders. These partnerships rested in turn on a strict respect of frontiers set between their separate turfs.

The Council mobs did not infringe on each other’s territory. Instead, they coordinated their actions and helped each other in a mutually beneficial alliance. This set-up likely was inspired by the National Crime Syndicate of the 1930s and beyond.

The Council was from before the days where fictional mobsters positively had to be Italian-American, or Chinese-American, or Japanese, or Russian-American, or whichever. Therefore, nearly all chiefs of the organisation were WASPs with English family names. They had ties to the UK, since their international affairs division aid operated in London.

As was common back then with fictional mobs, the Council was organised along more-or-less corporate lines. It could be likened to a national sales organisation with jealously protected territories and shared strategic resources.

The individual Council crews seemed to be independent operations, not part of another alliance such as the NCS, the Commission, or loose ethnic or geographic affiliations.

Some captions state that the Council coordinated organised crime in general, which seems to be a bald exaggeration. Still, the Council division chiefs did command extensive influence and power within the underworld of their respective turfs.

The division heads of the Council were : 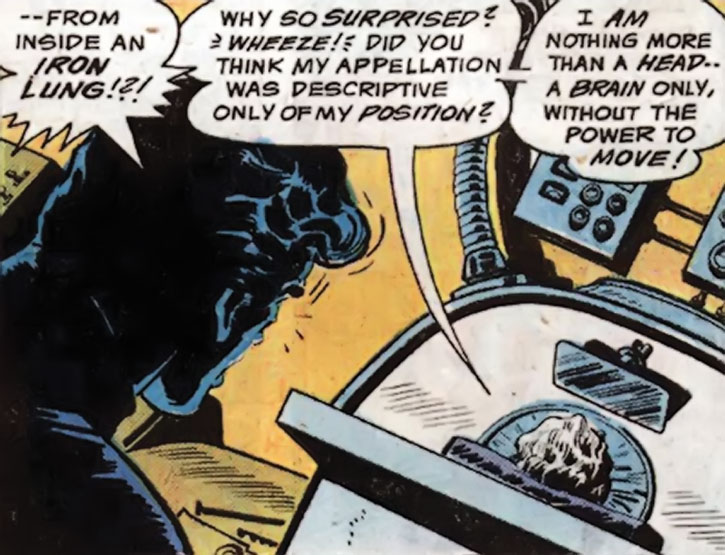 The Head had arranged for extensive infiltration of major law enforcement agencies, intelligence agencies and the like over the decades. One of his helpers casually mentioned having men in the FBI and CIA. The availability of such contacts presumably played a large role in convincing other crime lords to form the Council.

The divisions of the Council were geographical, not centred on specific activities. However they seemed to have core businesses, likely based on the original business of each core crew. Those that were witnessed during Nemesis’s war against the Council were :

The man behind the Council, the Head, seemed in 1980 to be in his 70s if not in his 80s. Early during his career — perhaps during the 1950s or even the 1940s — FBI agent Ben Marshall shot the Head during a gunfight. The criminal ended up paralysed and had to live in an iron lung.

A highly intelligent manager, the Head managed to “grow arms and legs” by having trusted henchmen carry operations for him. He kept organising everything around him until the Council came to dominate American organised crime.

Though the Head was headquartered in Gotham, the Council kept but a minimal presence there. Presumably the Head was lucid about the Gotham situation, and knew the value of avoiding the numerous madmen and vigilantes there.

The history of the Council and its rise, whilst presumably quite interesting, were never fully documented.

In 1978 or 1979, the Head finally had his revenge. Ben Marshall, now a senior FBI man, had sent one of his protégés, agent Craig Tresser, to infiltrate the Council. The young agent was detected and captured. The Head had his pet scientist brainwash Tresser, seeing him as his perfect vehicle to get back at Marshall. 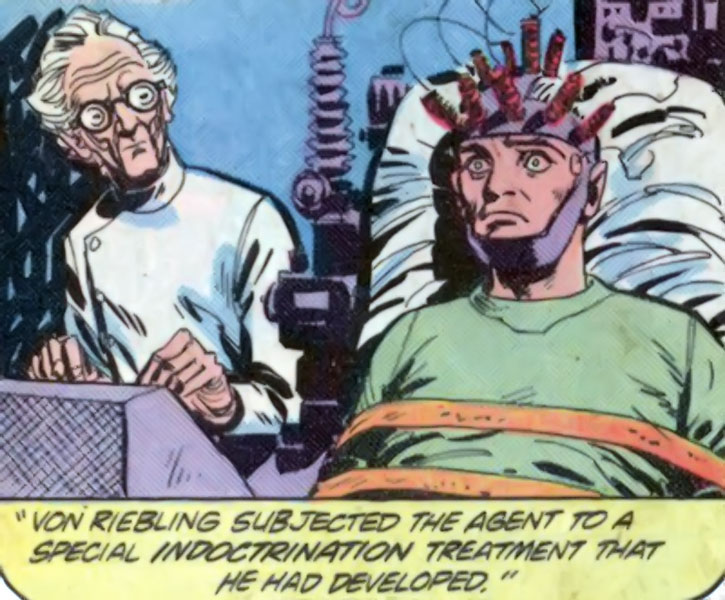 On the day when Marshall was to be named the new Director of the Bureau, the brainwashed Tresser gunned him down in full view of everyone. The young man was shot dead in turn by nearby agents. No clue was thus left behind. The Head had had his perfect revenge, characteristically executed as a long and meticulous plot.

Locating the Council’s HQ in Gotham, Nemesis ended up allying with Batman. Together, they located the Head. Though the Head had Ben Marshall’s widow Marjorie captured as a hostage, Nemesis and Batman managed to raid the Head’s HQ. In the end, the Head was murdered by one of his own henchmen.

Though the Council was weakened by the death of their Head, losing his paranoid and meticulous planning and webs of contacts, the individual mobs were still prosperous and quite dangerous. Nemesis started stalking them and taking them apart, using Head-style meticulous plans. He supplemented his great intelligence with advanced gadgets and incredible disguises.

Halfway through, the remaining Council members decided that whoever among them would be the one to eliminate Nemesis would become the new Head.

This, of course, put them at each other’s throat. When it seemed that Kingston was about to have Nemesis killed, Maddoks had an inside man murder Kingston. Nemesis soon leveraged this, arranging for the assassin to talk and implicate Maddoks.

After these betrayals, only Ms. Scaffield was left, making her the de facto Head. As new, tougher anti-mob legislation was to be voted, Scaffield decided to launch an operation prepared by the previous Head. It was called Operation:Overkill.

She chose lieutenants among the various mobs to become the new division heads under the leadership. Scaffield then launched Overkill – a meticulous campaign of bombing and terror orchestrated in large part by funding the People’s Liberation Army terror group. These terrorists were strengthened using various made men, hitmen and connected guys.

Many of the bombings were diversionary, though they did kill dozens. The main objective was to kill Senator White, the main sponsor of the new laws. With White out of the picture, the Council assumed it could lobby the law into legislative limbo.

The plot was nearly successful. But Nemesis requested Batman’s help and together they put an end to Operation:Overkill. Nemesis seemingly sacrificed himself to crash an helicopter full of explosives onto Scaffield and her men before it could be used to kill White. The Council was pretty much destroyed.

The Council survived in a very diminished form. Presumably, minor lieutenants struggled against each others for year to rebuild something that worked. From there they could revive the Council brand. Other mobs also attempted to take over decapitated Council activities. 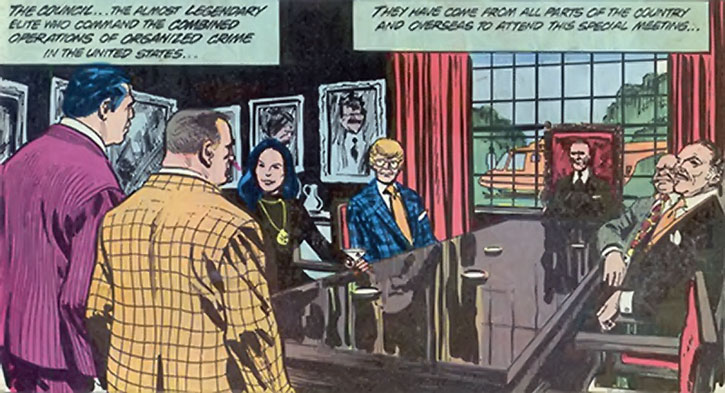 The Council reemerged as a viable criminal organisation decades later, perhaps as late as the early 2000s. The Trombetta family was an important part of this alliance, and the new Head was Senator Andrew Bell.

While the historical Council was an old-school, straightforward mob running criminal operations and breaking legs, the new Council was much more modern and complex. Much of its activities resulting from deep infiltration and capture of legal concerns.

While it was still a mob with gunmen and the like, a lot of the Council rested on modern-day white collar crime. That earned far more money and was far less risky than the old-school activities.

Nemesis, now far more experienced, swiftly took out a Trombetta capo. He then managed to defeat the Secret Service and capture Bell. However, he was intercepted by an artificial double who publicly executed Bell, leaving the real Nemesis to be arrested. With Bell exposed and murdered, the Council presumably collapsed again.

The 1980s Council were a mostly traditional crime ring, but they didn’t skimp on the gear. When they posted guards to provide security for an important meeting, those weren’t goons with .38 revolvers but hitmen with M14s. They deployed helicopters, limousines and other things that were considered the height of wealth in the 1980s.

Council heads have boasted that their meeting places and headquarters were more secure than the White House. This may not have been a complete exaggeration. The Head’s Gotham HQ had 12 APs in security systems. These included pit traps, intricate locks laced with explosives, well-armed guards, electric eyes and the like. Even Batman had to burn Hero Points to penetrate such security. 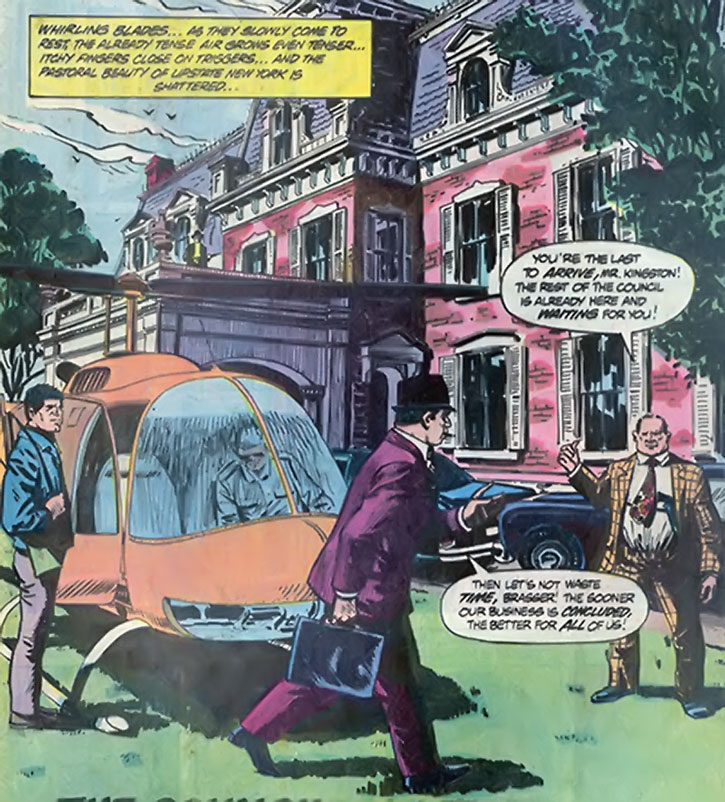 One of the Head’s two main helpers was Dr. von Riebling. He was an aged scientist best-known for his wartime service with Nazi intelligence service. Von Riebling had Charisma (Interrogation): 07, though he needed a lot of tools and chemicals to use it at its full level. And a Stroke of Genius that enabled the construction of an advanced brainwashing machine.

The other, his right hand-man and enforcer was named Brewster. Brewster was obviously from the military and likely from an elite unit with extensive combat experience – presumably in Việt Nam. The “special forces” stats in the generic soldiers article on WORG are probably not too far off, but add Martial Artist: 05 (and thus two points of Initiative).

Von Riebling was killed on the Head’s orders since the Head felt that he was becoming a security risk. But he murdered the Head in return before he died.

Brewster was knocked out and arrested when Nemesis and Batman raided the Head’s HQ. Kingston later had Brewster freed and re-hired, but the enforcer was seemingly killed by one of the lions on Kingston’s estate.

At one point, Ms. Scarfield hired the international hitman Greyfox. She later associated with the terrorist Bloodclaw. 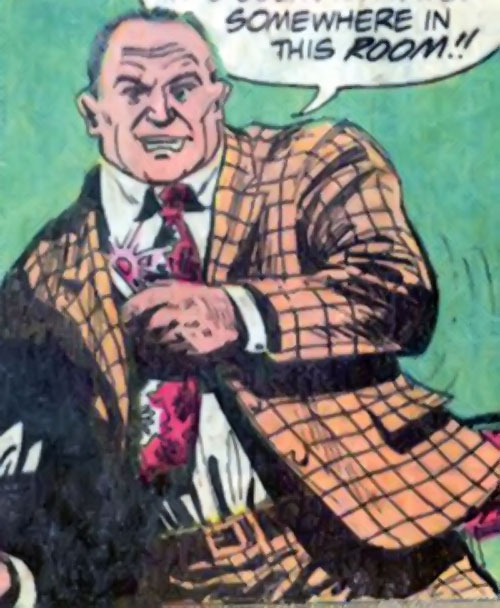 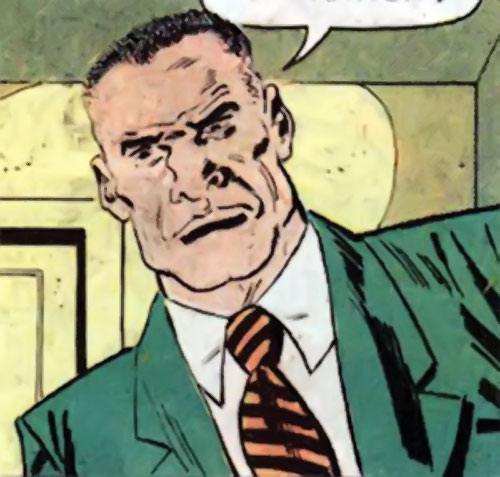 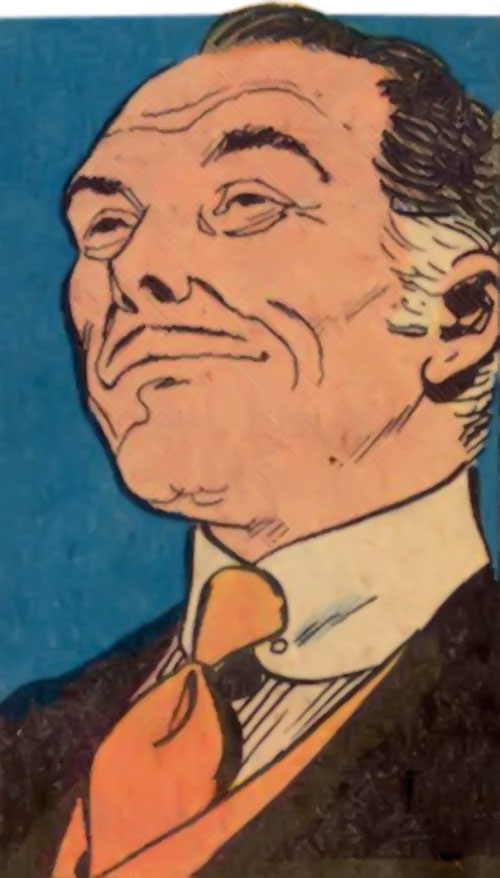 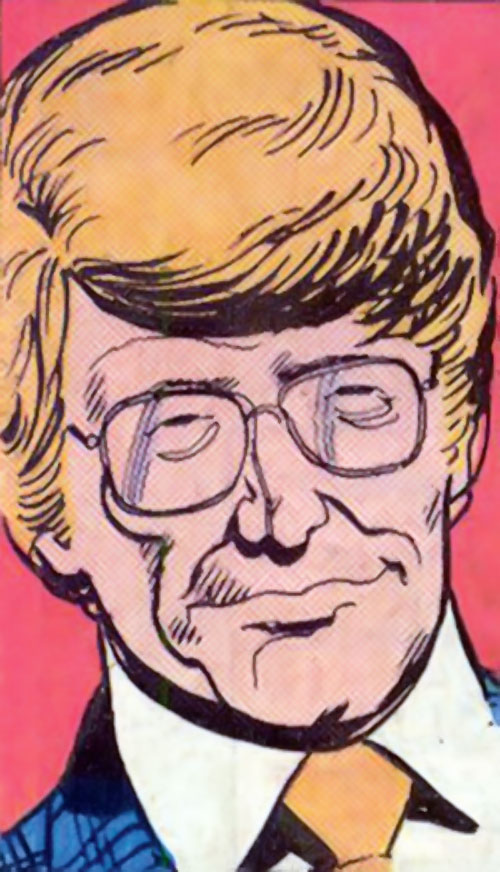 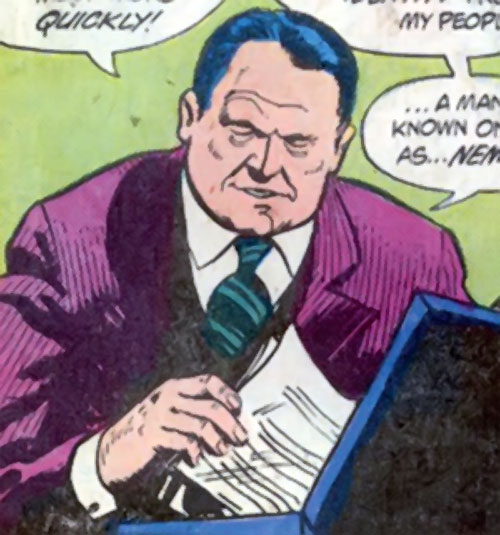 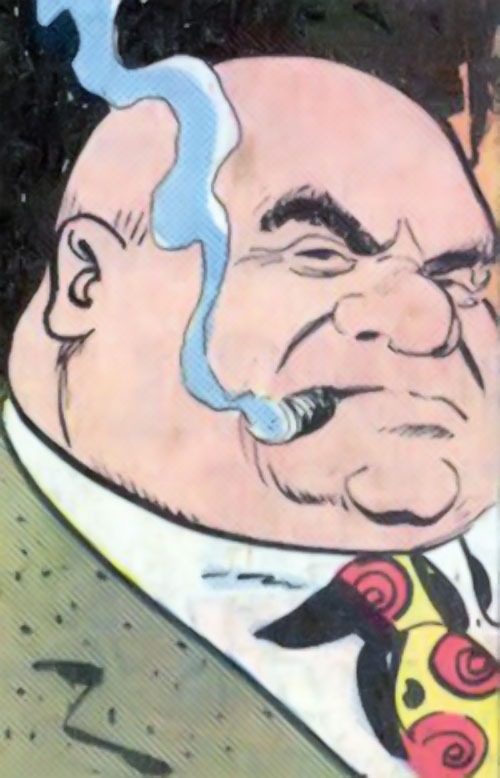 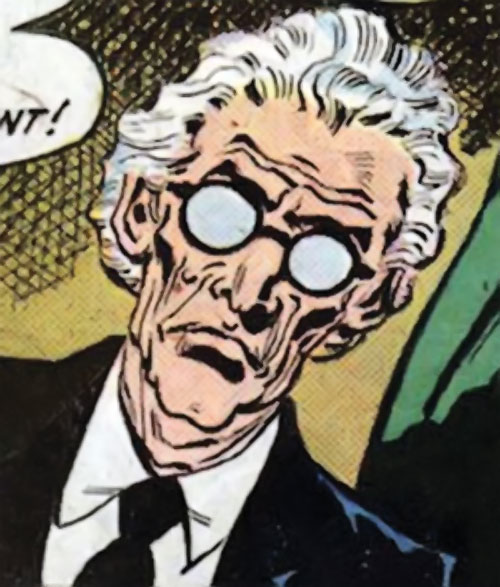 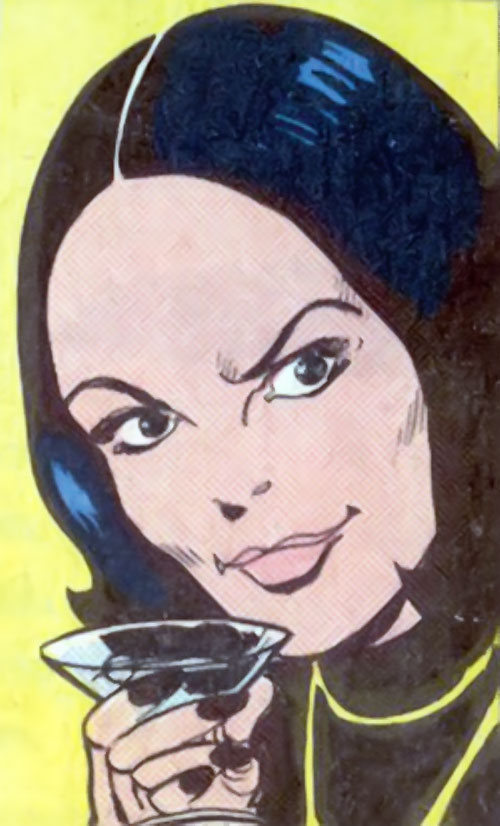 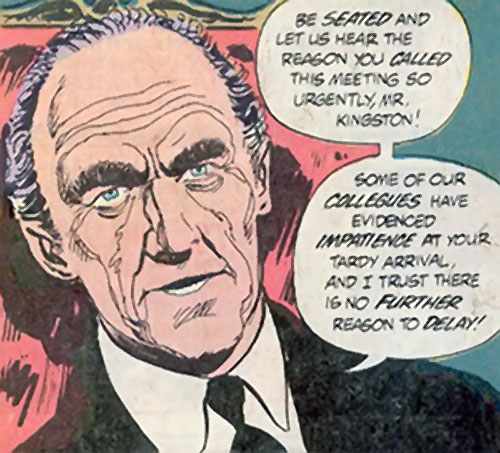