Vampire Hunter D is a loooong series of novels – 25+ books since 1983. These are written by Hideyuki Kikuchi and illustrated by Yoshitaka Amano. The stories take place in a kitchen-sink post-apocalyptic far future, where people are gradually getting rid of their decadent vampire overlords.

“Adaptation” often being the name of the game of Japan, this successful series has seen adaptations as manga , movies, animé , etc..

Magnus Lee is one of the aforementioned vampire overlords, and clashes with the titular Vampire Hunter D.

Magnus Lee is a vampire over 3,000 years old. Along with the usual vampiritic abilities of his kind, he learned how to catch the blades of highly skilled swordsmen with his bare hands.

Being as old as he is he has also amassed an impressive array of gadgets, wealth, and servants.

His major downfall, besides the usual vulnerabilities that his kind possess, is his overbearing arrogance and his own twisted view of the role of nobility. But despite these drawbacks he is an ancient and powerful dark lord and not an opponent to be trifled with.

Given his background, engineering and scientific skills (in DC Heroes terms, Gadgetry and Scientist) seem highly likely. But they have not been clearly demonstrated.

The Count received martial training from the vampiric founder, Count Dracula. He has lived over 3,000 years.

Being both blessed and cursed with immortality the Count occasionally escapes the boredom by taking fair young maidens as his brides. One such union bore him his daughter Larmica.

However the nobility of Vampires did not fare well over time. Once the supreme lords of a post apocalyptic Earth, they have allowed humanity to once again regain control. The Count and his daughter are only a handful of the great vampires that once ruled now remaining.

For a long time the Count abandoned his castle, but he eventually returned. Then he again indulged in his favorite past time – taking a beautiful young maiden as his “wife”. He chose Doris Lang, as she was said to be the fairest maiden of the land.

Since it was a game to him, the Count chose to gradually feed on her rather than take her right away. A desperate Doris attacked hunters drifting through the area, hoping to find one strong enough to take on Lee. These chance encounters led to a confrontation with D, perhaps the greatest vampire hunter in history.

Doris could retain his services. A game of cat and mouse ensued, then a final showdown between an ancient dark lord and the mighty hunter.

Count Magnus Lee is an ancient and powerful vampire in the tradition of Dracula. And he dresses and acts the part. He typically wears a Victorian era tuxedo befitting of nobility with a long black cloak.

He is at the same time a strikingly handsome and frightening figure. His features are dark and everything about him, from his fangs to intimidating gaze, exudes evidence that he is a predator to be feared.

It is also highly likely, given his name and appearance, that he is homage to Christopher Lee, the chief actor to play Dracula in movies.

An ancient noble, Count Magnus Lee is at once arrogant and flamboyant. He is prone to giving long winded, well spoken speeches. He often taunts his opponents.

He lives his life by a code of honor. It appears to be a sort of twisted code of nobility. But no matter how he dresses it up one gets the impression that he is no more than a bully who believes that those weaker than him are his play things (which’s pretty much everyone !)

He has absolutely no qualms about killing humans, and little about destroying vampires. He will not hesitate to make others his pawns simply because it suits him.

Despite this empty life he leads, or rather because of it, his only real joy of escaping the boredom of immortality is to occasionally take (by force of course) a beautiful young maiden as his “bride”.

As one can expect from such a character, his own arrogance was his downfall.

“Did you come here expecting to find us asleep, foolish one. As you managed to stop my daughter, I believed you to be a stronger opponent than the usual insects, and I allowed you this meeting. But, where you sauntered into the blackest hell without even suspecting the danger awaiting you, I may have erred gravely in my assessment.”

“Well done for a lone woman. She’s every bit the fighter I thought she’d be. Child, I must have your blood at all costs. Wait for me.”

“Silence stripling. Born of noble blood as you are surely you know what eternal life means. Life given until the end of time ? It is our duty to do just that crushing the human worms underfoot all the while.”

The movie version and literary version of this character are not wholly incompatible. Statwise they match each other very closely. The movie version would have Telekinesis: 8 instead of the cape and up his Regeneration to 15.

Note:
Stats in parenthesis are the bonuses he gains in werewolf form.

Drawbacks:
Alter Ego (controlable), Serious Rage, No others demonstrated, but feel free to give him all the suitable drawbacks a werewolf should have (i.e. Vulnerability to silver). While in werewolf from he also has Strange Appearance. Also the below mentioned Powers are not usable in human form.

Not much to go on, but then given that he’s a low level mook, not much is needed. He’s a hairy nondestript brute who bows before Lee and snarls at everyone else. His werewolf form is stereotypical.

I chose the literary version of the Count rather than the animated version because there are more concrete indications of what he can actually do. That said this wu is still highly speculative as we don’t really see him in action much.

Stats are somewhat inflated because one would naturally assume that a 3,000+ year old vampire should surely be a force to be reckoned with. Lastly in the old romantic tradition of vampires such as Dracula here is a truly powerful lord. 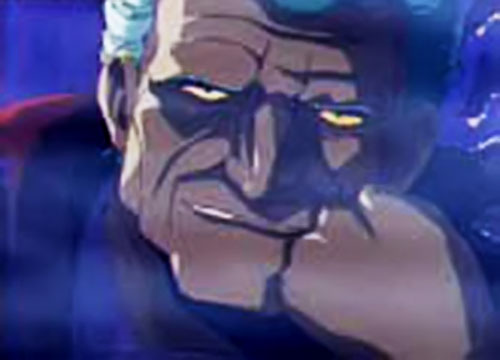 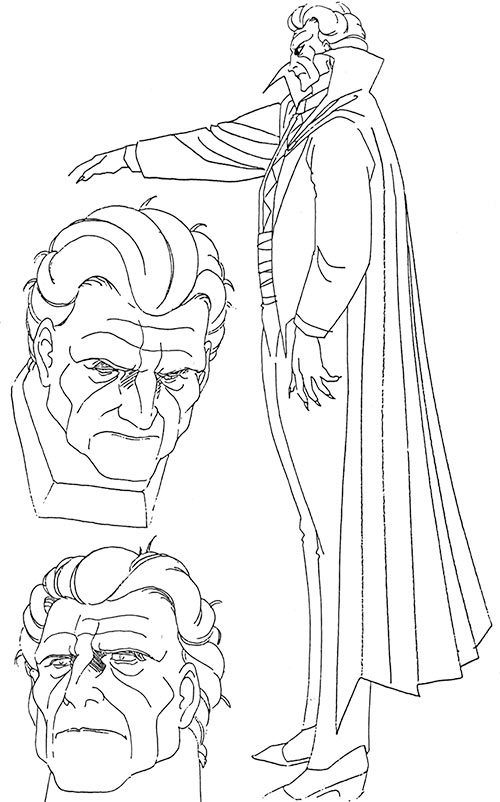