Crackerjack is a highly acrobatic hero and a reasonably good fighter. He has no superpowers, but carries a baton whose round tip can be fired off at the end of a line, acting as something similar to a grappling hook. This feature is used to line-swing across Astro City.

He is an expert at taunting opponents (and friends). Somehow, perhaps due to pure luck, he often manages to save the day by making opponents defeat themselves or their allies. Of course, Crackerjack gladly throws himself into melee as well.

He has the uncanny ability to show up to a scene of a crime, just in time to nearly botch a caper and then steal the credit from the heroes who have been doing most of the work.

As of this writing, nothing is known about Crackerjack’s past – though Busiek promised there’d be material about that. His first appearance in Astro City seems to have been in 1991, and since then he has teamed up with most of the local heroes.

Over the years, Crackerjack has an impressive track record of bringing in the criminal element (only partly from taking the credit of others’ accomplishments).

For a time, Crackerjack lived as a struggling actor named Eugene Wallace. In his apartment at that time, he kept a number of distinct wigs and fake IDs. It thus seems likely that he had several civilian identities, possibly at the same time.

His dashing style and movie-like posing make him one of Astro City’s most recognizable heroes and will be seen in most major events !

Crackerjack is wearing a colorful and dashing circus costume. It consists of red boots, green pants, a red belt with a white star, a white shirt with six green stars and red stripes and with the chest bare, red gloves with white stripes and a green headpiece.

He is often seen swinging around the city looking for crime, which he often just happens to stumble upon.

Crackerjack is a dashing, daring, agile Errol Flynn-style superhero. Happy-go-lucky, big ego, glory hound, showoff and extrovert type. He seems to thoroughly enjoy danger and action and is probably an adrenaline junkie. Crackerjack is noted for his theatrical sense of showmanship and for his… deep appreciation of his own sense of humor.

He always poses for a crowd in a cocky manner and with a motor mouth. Clearly, his image is important and he will work hard to clear his name if his image is smeared down or if he is framed for criminal actions. Less admirable traits are that he blames others for his own mistakes, and takes credit for their work. He also depends on luck, does sloppy work and is jealous of others.

Nevertheless, his heart clearly is in the right place, and if he can have fun while playing the hero, why not ? 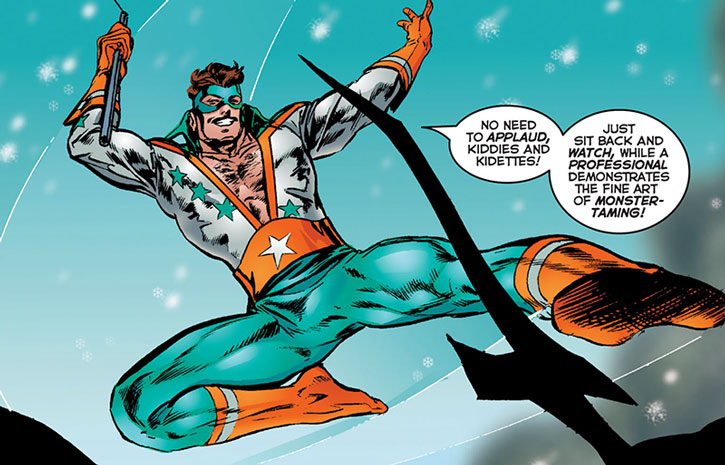 Most of the superheroic community has a low opinion of him due to his showmanship and egocentrism. But he nonetheless has an impressive track record and has won the hearts of the public. He has many fans throughout the city, and most notable women of all ages. His comic book, for which he gains royalties, is, in fact, the number one top seller.

He has met just about everyone in the heroic community in Astro City, knows the secret identities of several, but they will only work with him if it is absolutely necessary. The police force regards him with great suspicion and distrust. None of this, however, dampens his enthusiasm for adventures at all.

Perhaps as part of some game, he seems to employ several different secret identities at once. One of these, Eugene Wallace, was an actor, a dancer and a genial failure with a smile for everyone he encountered. His Wallace identity was discovered, but that might have been intentional.

It is hard to determine which identity, if any, is his real personality, and what is play. Although unlikely, if everything actually is just played roles, his Actor skill should be increased to 7 or 8 APs.

“Heeeere I come to save the daaay ! No need to applaud, kiddies and kidettes ! Just sit back and watch, while a professional demonstrates the fine art of monster-taming !”

[Rescuing an elderly man from a fire] “Heads up in there, you lucky unfortunate, you — and better have your autograph book ready — ’cause you’re sure to want a memento of this daring rescue to show to your grandchildren someday ! And in your case, sir — that may mean tomorrow ! Ba-da-bump !” 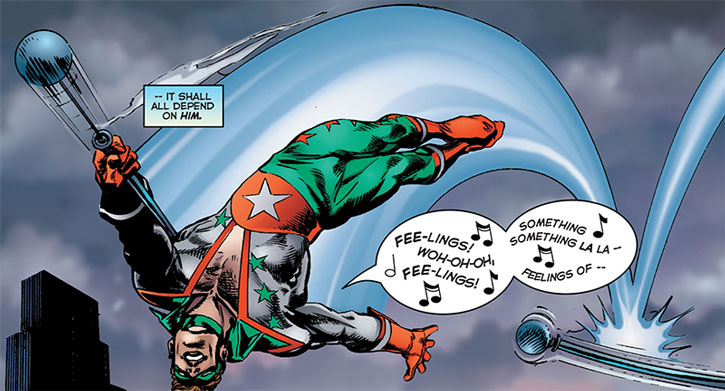 “C’mon, Nightingale — I know a nice little place around the corner — could be your lucky night…” 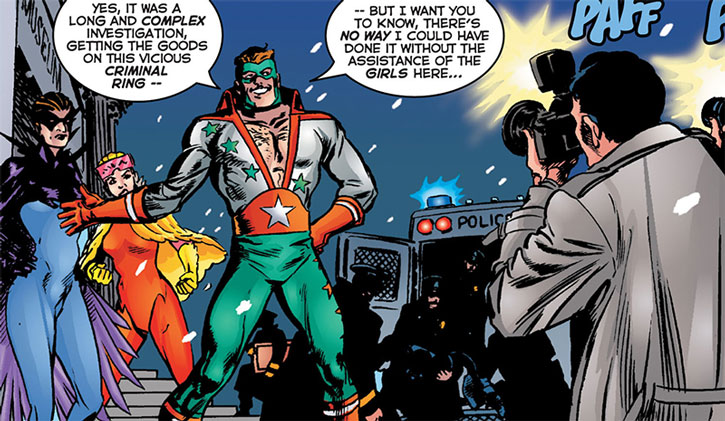 Crackerjack: “[handing over some criminals] Here you go, officers — a trio of sleeping not-so-beauties, courtesy of Astro City’s own star attraction !”
Police 1: “Really ? I don’t see Samaritan around anywhere…”
Police 2: “I don’t suppose you’ve got any evidence on these guys ? Any indication they were actually doing something criminal ?”
Crackerjack: “Aw, pshaw ! Gotta leave something for you boys in blue to do, right ? Otherwise, you’d have to change your slogan to ‘They also serve who only stand and watch !’ Toodles !”

Nightingale: “Just remember, ’Jack — this is our case ! Not yours !”
Crackerjack: “I’m only lending a helping hand, dear lady ! Pretend I’m not even here !”
(later)
Crackerjack (posing for the press after the criminals have been caught): “Yes, it was a long and complex investigation, getting the goods on this vicious criminal ring — but I want you to know, there’s no way I could have done it without the assistance of the girls here…”

Equipment:
Crackerjack Baton [BODY 06, EV 03 (07 w/Martial Artist), Notes: Baton contains a wirepoon line of 4-5 APs of length useful for swinging. The weapon is very rarely used for combat since Crackerjack prefers to use his own fists]. 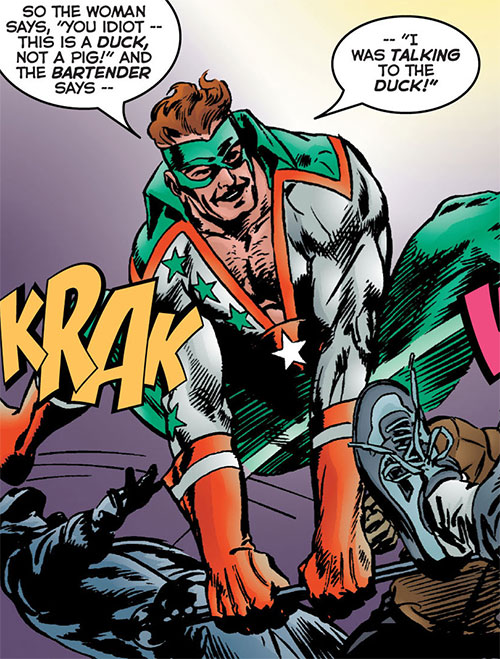 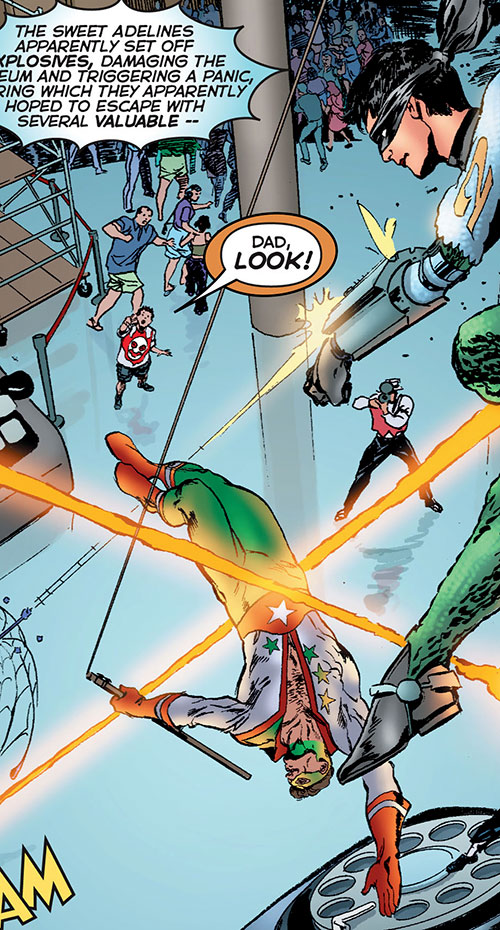 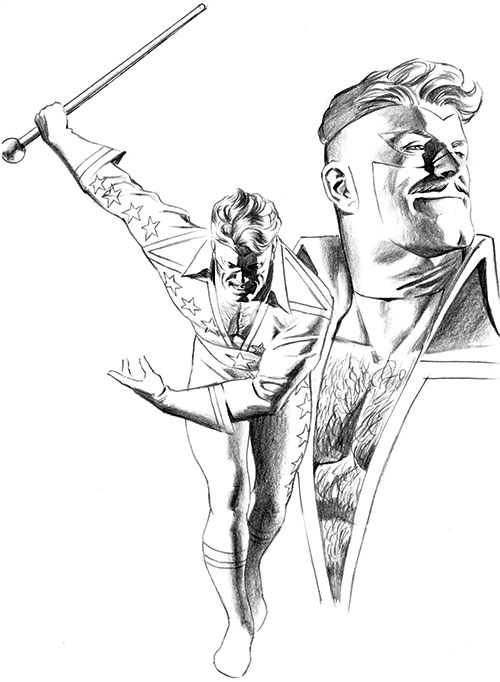 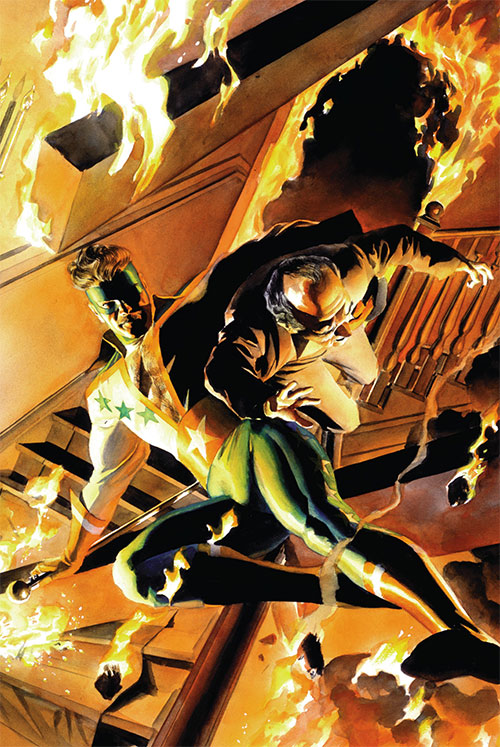