Crazy Eight is a skilled athlete, acrobat and juggler with excellent reflexes. He’s difficult to hit once in movement, and can perform impressive leaps and somersaults.

His other thing is a seemingly endless supply of projectiles styled as eight-balls.

”Seemingly endless” isn’t just there to pretty this paragraph up. Crazy Eight will rapidly hurl dozens of balls at his enemies. He doesn’t seem to ever run out or be concerned with saving ammunition.

Since he often has no visible mean of storage for his eight-balls, one suspects that unusual technology is involved. For instance, something with Pym particles and hundreds of eight-balls within his thigh holsters.

One scene gives the impression that this system needs to be booted for five or six seconds before more balls than what can physically be holstered can be summoned.

Having unlimited ammunition allows him to dominate most fights. Especially since he’s quite accurate. Opponents who are not superhumanly durable will likely be forced on the defensive. Dodging all these balls takes extraordinary agility, while taking cover will not work for long.

Loads for the eight-balls include :

Crazy Eight is a costumed criminal who emerged some years before the MC2 era. He is the son of Angel Face, an insane 1990s super-villain who ended up imprisoned at Ravencroft. His little brother became the costumed villain Funny Face. Angel Face had Crazy Eight promise to protect Funny Face. 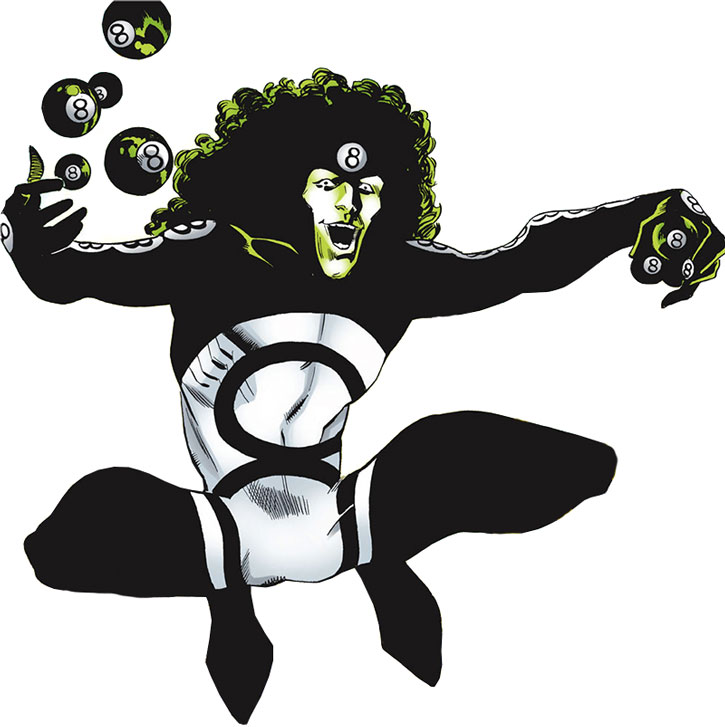 Crazy Eight ran into Spider-Girl (May “Mayday” Parker) early during May’s career. He was then running a smuggling gang, and forced the unprepared Spider-Girl to flee.

However, Darkdevil challenged Spider-Girl to take Crazy Eight down. He even told her from which pier the next major smuggling run would leave. Spider-Girl narrowly defeated Crazy-Eight there.

Wanting to hire Crazy Eight and prove his power, the Kingpin sent the assassin Mr. Nobody to Crazy Eight’s trial. Mr. Nobody and Crazy Eight took down the police in the courthouse, but Spider-Girl again intervened.

Though her efforts may not have been sufficient, she received discreet help from her father. Mr. Parker easily flattened Crazy Eight.

Some months later, a major gang war started brewing between the Kingpin and Canis – the latest up-and-coming crime lord in New York. The Kingpin hired Crazy Eight to take care of loose ends, such as minor gangs attempting to switch to Canis’ side.

However, Crazy Eight grew concerned about his kid brother Funny Face, who was a close ally of Canis and thus at risk.

Crazy Eight made several attempts at convincing Funny Face to scale down his involvement. Then he tried to convince Canis. Eight’s colleague Mr. Nobody came to suspect that Crazy Eight would switch sides to protect his brother. Therefore, the Kingpin had Nobody run surveillance on the brothers.

Mr. Nobody saw Crazy Eight discussing a change of allegiance with Canis and Funny Face, and attacked. Spider-Man (Gerry Drew) attempted to intervene, but was out of his depth. Mr. Nobody was about to kill Drew when Spider-Girl leapt in and snatched him out of the line of fire. Mr. Nobody’s burst accidentally killed Crazy Eight instead.

Blaming Spider-Girl, Funny Face freed his mother from the sanatorium. They rampaged through the local underworld to obtain information about Spider-Girl. This considerably worsened the gang war in New York City, though Spider-Girl eventually defused the situation.

Crazy Eight sees himself as an entertainer. He goes for a flashy style and banter that oscillates between comedian and politician. That is, he talks all the time, in an elaborate and oft-pretentious way. The general theme and style will be whatever is on his mind. 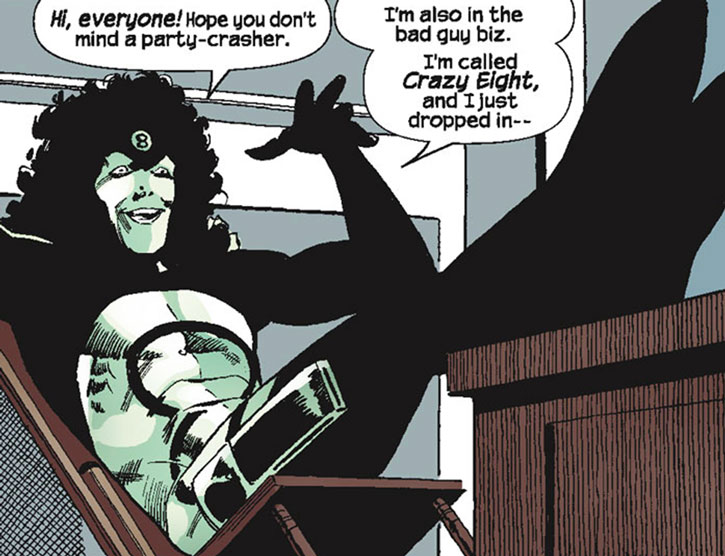 Sometimes he’ll act as if he were a famous stand-up comedian. Sometimes he’ll ponderously expound about his professionalism as a mercenary. It might be intended to aggravate his opponents, or maybe he’s just nuts.

The relationship between Crazy Eight and Funny Face seems to have frozen somewhen around age 12. Crazy Eight is very protective and constantly reminds his kid brother about the life advice their mum gave them (such as not getting involved in major gang wars). Or to call her more often at the Ravencroft Asylum for the Criminally Insane.

Their verbal fights are downright childish.

“I am sooooo very glad you decided to drop in — to help relieve the otherwise routine evening toil !”

“Go suck on a prune ! You’re my lawyer, not my fashion consultant ! I have a certain image to maintain, and I won’t disappoint my public by not wearing my costume !”

“You’re only one man, and you use a cane for support. As threats go, you barely rank above a teletubby.”

“In his own endearing way, Funny Face’s trying to tell you that we have a business interest in the web-head. We would appreciate a little professional courtesy. Unless, of course, you’re also allied with either Canis or the Kingpin.”