Crazy Quilt seems to be quite multi-talented. Especially since I have assumed in this profile that he built most of his colour-themed gadgets himself. He’s an athlete, a painter, a musician, a fighter and good with technology, vehicles and weapons.

By the time he gets his third helmet, he even has an excellent track record when it comes to hitting even such difficult targets as Batman or Robin. In DC Heroes RPG terms, I have assumed he spent most of his Hero Points  to boost his AV when fighting them.

Quilt is big on henchmen. He will almost always operate with a half-dozen of heavies.

Early on he had US Army firearms – perhaps he’s a former GI. He thus had a Colt M1911A1 and a “Garand” M2 selective fire .30 Carbine. Early Crazy Quilt also used to carry a bucket of luminous paint in his getaway vehicles, to splash opponents he had to fight so he could see them. Said getaway vehicles included cars, an autogyro and power boats.

Then he deployed special themed gadgets :

I’m sticking, as usual, to the chronicling-what-was-actually-seen-in-primary-sources  approach. But Crazy Quilt has a rather unusual appearances track record. His appearances per publication date go like this : 1946 ; 1951 ; 1979 ; 1983 – and so on until 1999. Maybe more after this was written.

An easy solution is to compress the timeline by displacing his first appearance in your campaign. For instance, instead of the Boy Commandos in 1946, he clashes with the Newsboy Legion clones in 1992, and his career takes place after that.

Or you could keep him as a 1940s villain and have fun coming up with reasons for his timeline (Time travel ! Hibernation ! Relativistic speed adventures ! Colour-coded immortality ! Or perhaps he was born in 1900 as a Century Baby from the Wildstorm Universe !).

Batman #368 already has an implicit retcon, though. In this issue the initial defeat of Quilt is attributed to Robin (Grayson) instead of the Boy Commandos. So you could also use that version.

Apparently born in the 1900s, the famous artist who signed his paintings “Quilt” has his work featured in many galleries and museums. He was famous for his unusual use of colour. Right after the war, in 1946, he embarked on a tour of the recently-liberated Europe, painting the continent’s beauty.

This is at this point that the truth would be exposed. “Quilt” was actually a criminal mastermind ! His paintings, once examined with a special lens, would reveal daring criminal plans to be executed flawlessly by his accomplices. Gasp !

However, a rival hoodlum named Louie then barged into Quilt’s workshop with a gun in hand. He shot Quilt, who managed to shoot back and kill Louie. But although he had survived the bullets, the painter was now blind. He began a quest, going from surgeon to surgeon in the hope of regaining his sight. Quilt was usually accompanied by mob gunmen.

Eventually, one surgeon was forced to operate using an odd procedure. It worked but partially – everything was very blurry, except for the brightest colours. His men gunned the surgeon down, and Quilt went mad due to his new condition. He was now an insane criminal obsessed with colour – Crazy Quilt !

Soon, Crazy Quilt struck around Paris. During the night his men would paint jewellery stores and banks in bright colours so their boss could see. Then on the following morning they would savagely attack with guns blazing. One such attack was foiled by the Boy Commandos, who captured most of his crew. But Crazy Quilt escaped after being thrown into the Seine by a car crash.

Undaunted, Crazy Quilt carried on and launched his master plan – stealing the Mona Lisa. He had several of the Louvre  building painted red to mask his real target, then had his autogyro pilot drop him on the roof. Climbing down on a rope, Crazy Quilt sneaked in, knocked out a guard and absconded with the world-famous painting.

The Boy Commandos and Crazy Quilt fought in Notre Dame. Though the Boys managed to prevent him from running away with the painting, Quilt did escape in a power boat driven by a henchman. However, he was eventually arrested somewhere in the US, and sent to prison. 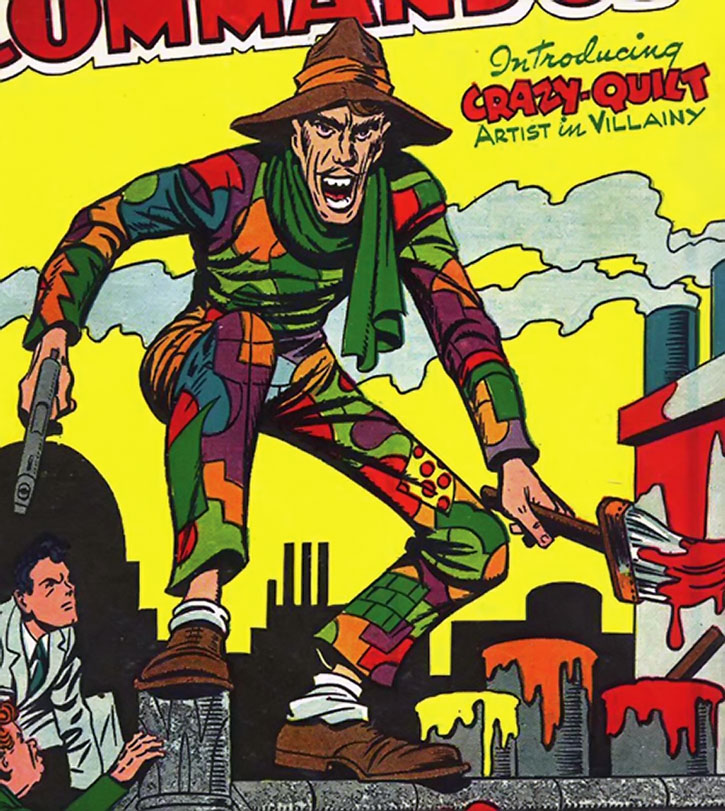 There, he worked on painting car licence plates – something brightly coloured which he could see. During the winter, he slowly and discreetly painted an overhead fan in a special colour scheme. In the summer, when the fan was turned on, the hypnotic swirl of colour mesmerised everyone and the dastardly villain fled.

(His original Paris appearance seems to have since been retconned  away. It was apparently turned in a clash with Robin (Dick Grayson), presumably in Gotham. And Quilt’s criminal network existed throughout the US, not in Europe).

Coming to Gotham City (where else ?), Crazy Quilt botched his triumphant return. As a result he laid low and played his colour organ. This was an unique instrument producing colours on a screen as well as music. In so doing, Crazy Quilt came up with a strange plan where he would steal… all the colours of Gotham !

Quilt then launched seemingly insane plans. He attacked a yachting club ball and sprayed only the most colourful pieces of jewellery with a special bleach to turn them white. He sabotaged a colour TV demonstration. He bleached Gauguin paintings  to turn them white, etc. When Robin intervened, Quilt even sprayed him and turned his colourful uniform white !

It was, of course, a trick. The “bleach” was actually a special washable ink. The plan was to steal the “bleached” jewels, paintings, etc. once everybody assumed them to be ruined and worthless.

Robin, of course, deduced this. And was predictably knocked out and thrown into a colour-themed deathtrap, from which he escaped to arrest Crazy Quilt. Holy 1950s stories, Batman !

When he later reappeared, Crazy Quilt stole an experimental laser from S.T.A.R. Labs after months of scheming and waiting. He then dazzled Batman and Robin long enough (using his special colour-helmet) to flee. Crazy Quilt then forced one Dr. Norman Dexter to operate on his eyes to restore his sight, using the experimental laser.

The operation succeeded in the nick of time, scant seconds before Batman and Robin breached the operation theatre. However, during the fight, Robin used a mirror to block a beam of light from Crazy Quilt’s helmet. This reflected the intense light in the villain’s still fragile eyes, ruining the operation and blinding him again.

However, Kinski got greedy and demanded to be paid on the spot. Crazy Quilt killed him using the laser. His sight restored after a fashion, Quilt now had one main objective — kill Robin !

He ambushed, blinded and severely beat up Robin. It was actually a new one – Jason Todd. Todd survived his ordeal and regained his sight, but that was the plan. Crazy Quilt used another new function of his helmet to implant Robin with a suggestion. The new Boy Wonder was to take out the Batman by surprise and come back alone to an ambush site.

The plan almost work, but Todd partially overcame the conditions and left directions for Batman (Bruce Wayne). Wayne came in in time to save Todd from Quilt’s thugs. That distracted Crazy Quilt long enough for Robin to use an improvised mirror to reflect his mind control beam back at him. Robin then ordered Crazy Quilt to remove, unplug and smash his helmet.

After that incident, Crazy Quilt’s appearances follow the “random villain among a crowd of these” pattern. Thus, he was part of the prisoners freed and given back their costume (including, in Quilt’s case, what seemed to be a fully functional helmet) by the Joker during one of his takeovers of Arkham Assylum.

Along with several other villains (such as Mirage, Mr. Freeze and, after a coin toss, Two-Face), he left rather than be a footsoldier in the Joker’s plan.

Likewise, by his next appearance, Quilt was part of the crowd of prisoners the insane doctor Arkham unleashed against the Batman. But Batman beat up everyone.

In keeping with his new theme, Crazy Quilt was also part of the crowd of prisoners (142 of them, according to the narration) who found themselves free in Belle Reve during the Underworld Unleashed  crisis. Apparently, he had been imprisoned with a working copy of his helmet.

Quilt was also part of the numerous super-villains who decided to lit up a candle to gain a boon from Neron. It would seem that he left before asking for a boon, though, along with several other villains who witnessed Neron beating Mongul up.

Crazy Quilt was next seen as part of the — wait for it — large group of villains who were duped by a JLA plot revolving around Brain Wave (actually the polymorphed Martian Manhunter) assembling a new Secret Society of Super-Villains. The plan worked beautifully and most if not all the assembled villains were captured by the newly-reunited JLA.

Crazy Quilt was originally a daring thief with an odd gimmick. But has always been portrayed as a casual killer. In fact he prefers or even enjoys killing witnesses, potential liabilities, etc.

Beyond his bloodthirstiness, Crazy Quilt is also defined by his burning desire to regain his sight through some weird mean or another. One he has succeeded, his next obsession is to kill the man who burned out his eyes (and, in at least one version of the continuity, has always been his nemesis) – Robin.

While Crazy Quilt hates Robin, he’s also to some degree afraid of him because of what the Boy Wonder has done to him in the past. Thus, he is careful and crafty when it comes to him. He doesn’t just charge in blasting.

Crazy Quilt has mostly been seen as an Arkham Assylum inmate these last few decades. Thus, it is possible his sanity took a turn for the worse compared to his last ’full” appearances.

“Just because I see only colour, the law may think I’m through ! The fools will learn differently, however ! Everything I do will be in colour – of many shades !”

“One more step and I fire, Robin ! You’ll meet your doom in colour !”

“You *are* going to operate on me, Doctor Dexter… or next time, I’ll make certain your precious hospital is reduced to a smouldering cinder !”

“Welcome to round two of my interrupted vengeance. I have the best seat in the house up here — better than ringside — and your death, Robin, will be the best sight my helmet’s new eyes have seen… Pound him.”

Drawbacks:
SPR (Can only see bright colours – it later became a CPR as his eyes were ruined and he became entirely blind), SIH of Robin. 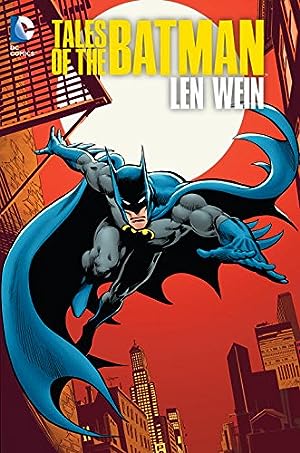 Tales of the Batman: Len Wein 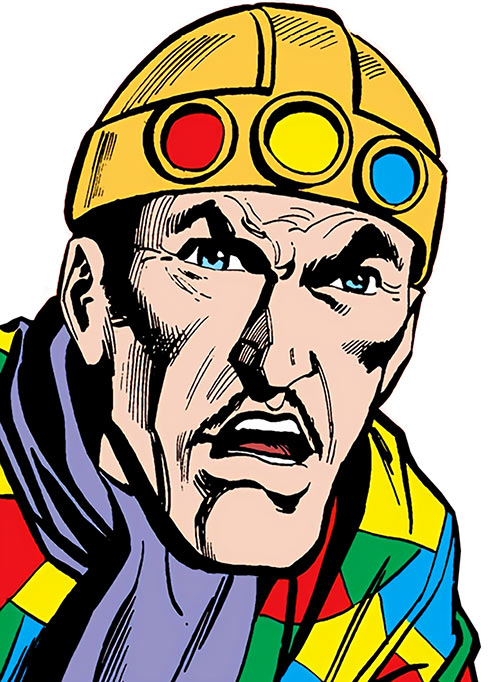 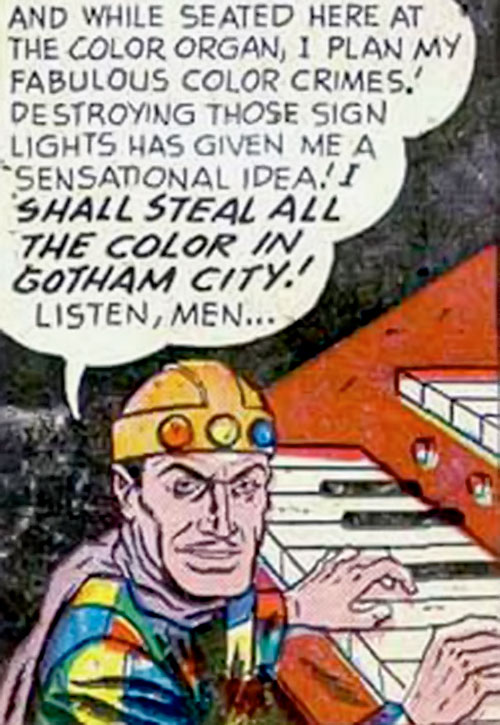 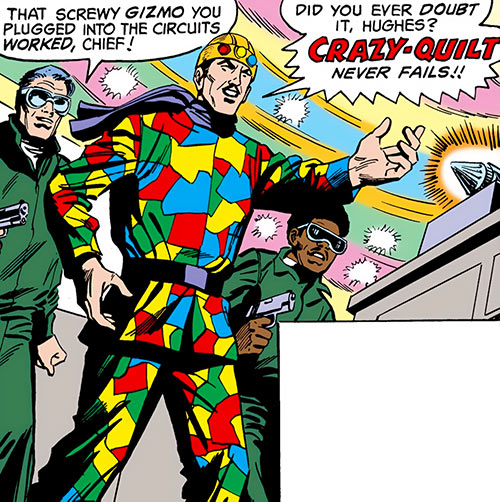 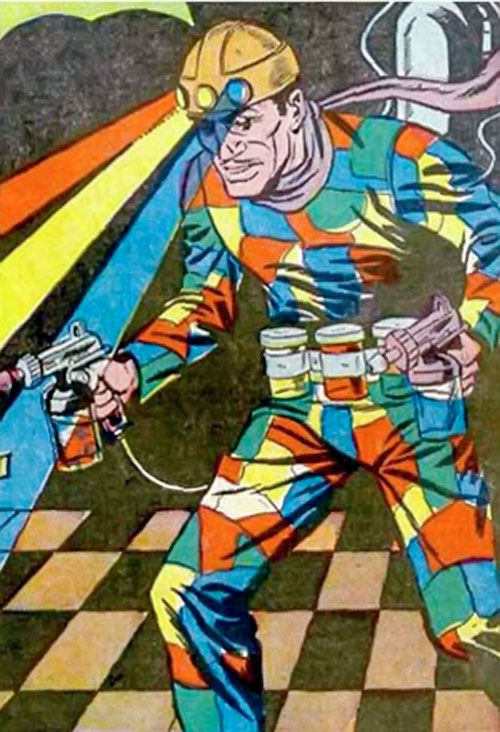