Doctor Thorne seems to be a competent physician. He’s presumably a surgeon with a general private consultation on the side.

He’s also a competent technologist. Thorne designed and prototypied his own equipment based on a medical theme and medical technologies. For instance he made himself a combat-worthy knockout gas gun. It can fire pink clouds of KO gas as quickly as one would discharge a .45 semi-automatic. And it will take down most persons in seconds.

The Crime Doctor works wearing scrubs and drives an ambulance. Furthermore, he sounds just like an important doctor – because that’s exactly what he is. This is a key advantage for him. When he comes running with a black bag and says he’s been called in for a medical emergency, people will usually try to help him.

Thorne quickly whipped up a good disguise (complete with fake beard and hair). So crafting professional-level disguises is probably a skill he developed as a consultant to selected criminals.

Dr. Bradford Thorne was a wealthy physician in Gotham, and a well-regarded notable. However, he was also pathologically fascinated by the strange criminal underworld of Gotham City. He wanted to become a part of it and experience the thrill of crime.

It is unclear when the Crime Doctor started being active. When he was seen he was no longer a young man, seemed somewhat established as a criminal, and had extensive facilities at his disposal.

His “Crime Clinic”, hidden in the basement of his townhouse, was used to help criminals plan their heists. It was also used to design and build special medically-themed equipment for the underworld. There was even an ER, allowing the Crime Doctor to operate on wounded criminals with full secrecy.

The Crime Doctor could drive his ambulance through a remote-controlled hidden access half a block away. He’d then drive down an abandoned sewer tunnel and right into the Crime Clinic.

Thorne was wealthy. His ill-gotten gains from his criminal consultations would go straight to charities to help provide medical services to impoverished Gothamites.

During one of his “operations”, everything went wrong. Unbeknownst to the Crime Doctor, the men he was consulting for were actually working for the treacherous criminal Sterling Silversmith. While raiding a medical research lab using the Crime Doctor’s plan the criminals called Thorne. They asked him to come since there was a problem.

When the Crime Doctor reached the lab, he found the criminals clad in biological suits and stealing the supply of interferon . Thorne opposed this, since it would endanger patients throughout Gotham. As it turned out, his clients had also tripped a silent alarm, bringing Batman on the scene.

Faced with this complication, the criminals fled. Yet, they had time to leave the Crime Doctor trapped in the lab next to a ticking bomb as planned. They had always intended to eliminate Thorne, as Silversmith didn’t want to pay the Crime Doctor’s fee.

Mere days before, Dr. Thorne had bandaged Bruce Wayne’s shoulder. The physician was standing in for Wayne’s usual doctor who was a vacation. After slashing at the Batman with a scalpel, the Crime Doctor recognised his bandage through the opening in the costume.

Thorne realised that Batman was Wayne.And his exclamation led Batman to realise that the Crime Doctor was Thorne.

Batman managed to get Thorne out of the lab before the bomb would explode. Wayne then shielded him from the blast with his body. Thorne escaped whilst the Batman was dazed.

Batman started hunting down Thorne to prevent his secret from getting out. At the same time Sterling Silversmith sent his men after the Crime Doctor. The thugs had heard the Doctor exclaiming something about Batman, and Silversmith suspected that the Doctor knew Batman’s secret identity.

Thorne, wearing a disguise, was about to leave town. But he stumbled upon a woman having a heart attack. He had to intervene to save her, allowing passing thugs to recognise him and bring him to Silversmith.

The criminal poisoned Thorne with quicksilver. He then ordered the doctor to tell him who Batman was if he wanted to be rushed to a hospital in time to survive.

Batman intervened and fought Silversmith and his men. He did not know that Thorne had been poisoned. When he realised what was going on he rushed the Crime Doctor to a hospital to have his stomach pumped.

It was too late. Thorne survived, but with brain damage that made it unclear whether he would ever recover enough to be more than a human vegetable.

A few years later, the Crisis erased both Earth-1 and Earth-2. There would be a Crime Doctor on New Earth, but as it turned out Dr. Matthew Thorne was quite different from the pre-Crisis Dr. Bradford Thorne.

Doctor Thorne is addicted to the excitement of crime. As a doctor he can identify the pathology, but there’s simply no way he can help himself. He just has to be involved in exciting felonies, either at the planning stage or whilst they are executed.

However, like his Earth-2 homologue, he cannot ignore his Hippocratic Oath. He will help sick and wounded persons even at considerable risk for himself.

The Doctor enjoyed playing up his persona as a medical practitioner. He uses medical terminology and metaphors, gives health advice, leaves little ℞ notes behind, etc.. This gimmick coloured everything he did. It would seem that he was trying to capture the aura of cool Silver Age Batman villains and their oddly-themed insanity and equipment.

He goes out of his way to make medical references. Meanwhile the criminals around him scratch their heads about yet another criminal Gotham weirdo.

While Thorne seemed quite involved in the Gotham City underworld and was impressing crooks with his “Gotham Super-Villain” style and efficiency, he was still something of a dilettante. When he ran into a ruthless killer like Sterling Silversmith, he knew that he was out of his depth and would get killed. His only option was to flee, though he did so competently.

“I always loved medicine, but crime is like a narcotic to me ! It’s like a tropical fever pounding in my blood ! As Dr. Bradford Thorne, I am a respected Gotham physician ! But as the Crime Doctor, I am truly alive !”

(Called upon by a crew of thugs to take out two well-armed guards) “I don’t mean to hurt your feelings, but any competent physician must always insist on making his own independent diagnosis !” (observes the guards with a monocular) “Hmmm ! You gentlemen are quite correct ! This is indeed a situation requiring immediate medical intervention ! Hurry ! One of you reach into my bag and hand me my injector gun !”

(Explaining why he charges twice his rate for house calls) “Preventive medicine and early diagnosis are always less expensive in the long run, gentlemen ! Any good physician will tell you that !”

(Note pinned on the shirt of a guard who has been gassed unconscious) “℞. Sir : you show symptoms of high Blood Pressure and should visit your family physician immediately ! The Crime Doctor.”

Drawbacks:
MIA toward the Thrill of crime, SIA toward Upholding his Hippocratic Oath, Secret Identity. 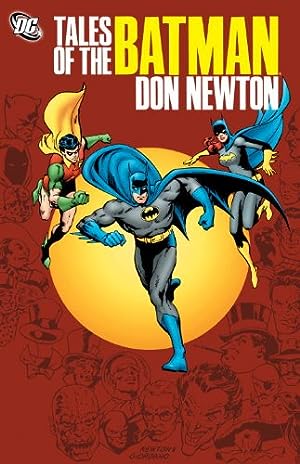 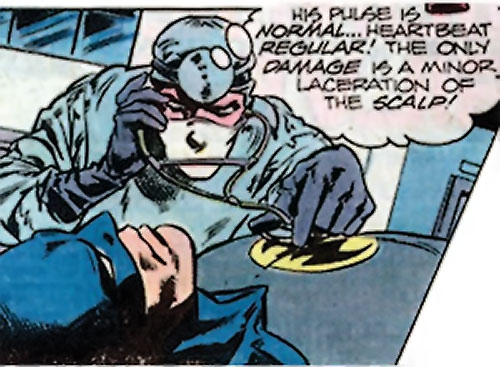 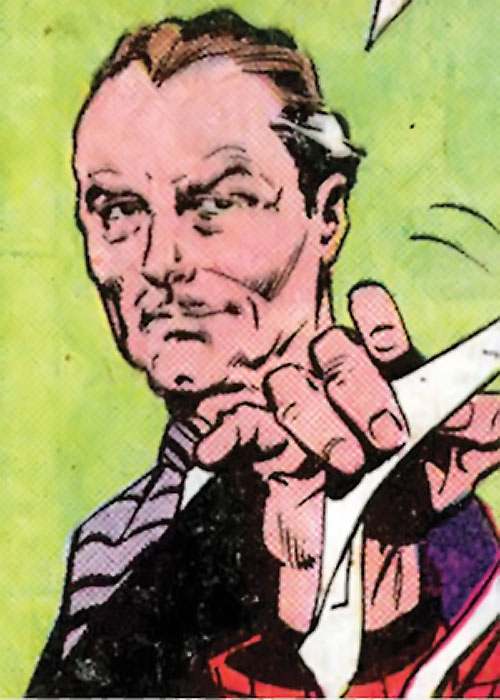 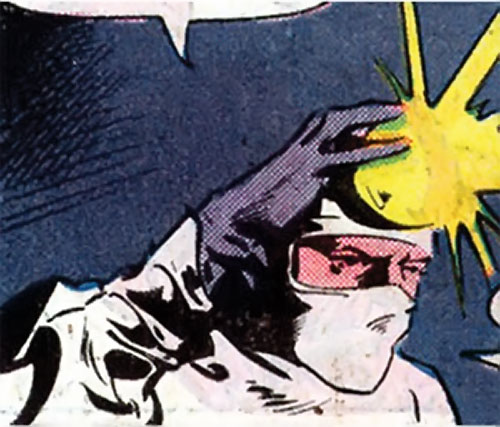 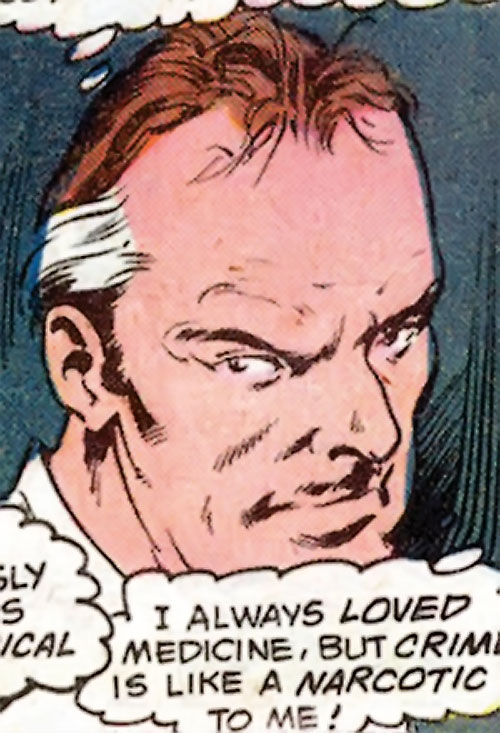