The first Crime Doctor is an obscure Batman villain. He first appeared in 1943, on what would be retroactively considered the pre-Crisis Earth-2.

This character is something of a near-miss when it comes to classic Bob Kane-era villains. He doesn’t quite work, but there’s probably a seed for a classic character buried somewhere in there.

Doctor Thorne is a brilliant physician and surgeon. He possesses extensive scientific knowledge related to the field of medicine. His main asset is his great intelligence and ability to learn. Being far sharper than the garden-variety criminal, he can plot far better than they.

He also taught himself such skills as using his stethoscope to crack safes by listening to the lock. This was the 1940s, after all.

While Thorne is no hand-to-hand combatant, he’s smart and decisive in a crisis. Furthermore, he could take a surprising number of punches. His hands are also very strong, since he’s an old-school surgeon.

It is possible that he had some technical skills. But the only hint toward that is his strange head reflector.

Earth-2’s Doctor Thorne was the very model of the successful 1940s physician. Competent practitioner, brilliant surgeon, great bedside manner, provider of moral support for his patients, hard-working, superiorly intelligent, devoted to healing, willing to greatly defer payment for his poorer patients, well-versed in the sciences, and affluent man about town.

He was also bored… and fascinated by the world of crime.

Rather than just read lurid crime novels — or perhaps after reading too many of those — Dr. Thorne decided to moonlight as a consultant for Gotham City criminal crews. For 25% of the loot (if the criminal came to the “Crime Clinic”) or 50% (if he had to make a “house call”), Thorne would make his superior, analytical mind available to the criminal element

As a consultant, he would show them how to proceed. He occasionally took a direct hand in the crime, such as employing chemicals to gas a watchman unconscious.

(The story taking place in the 1940s, Thorne is better in every way because he’s upper class. The fact that he indulges in lower-class pursuits such as crime is far more of a transgression — something unnatural — than it is in a more modern mindset.)

Thorne was meticulously careful. He only consulted for “patients” whose fingerprints matched those in his large file of known criminals. Likewise, when making house calls, he wore surgical scrubs to mask his face and avoid leaving any clues behind.

That wasn’t sufficient to ward Batman away. The Dynamic Duo soon discovered that “the Crime Clinic”, about which the underworld was abuzz, was just Thorne’s medical office.

Thank to his strobe emitter, the Crime Doctor would have escaped from the vigilantes. However a patient, in agony from a ruptured appendix, stumbled into Thorne’s office at that precise moment. 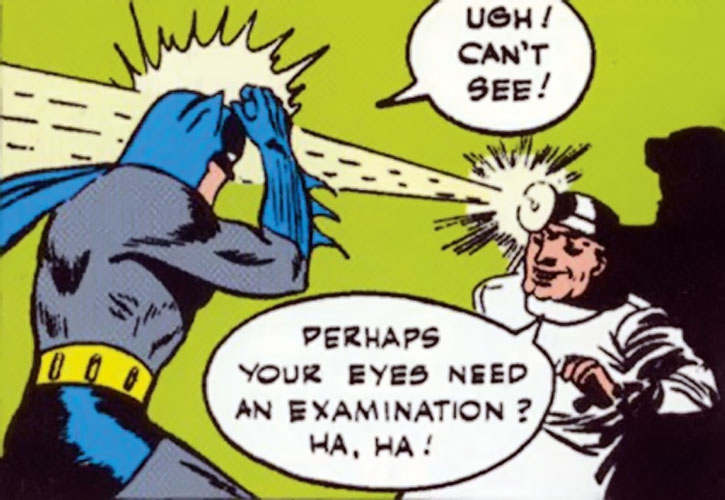 Since the man would likely die without immediate help, Thorne renounced fleeing. He brought the patient to his operating room, requisitioning Batman and Robin to act as his assistants. The superb surgeon saved his patient. He then turned against Batman and Robin, dousing them in ether and brandishing an open flame to keep them at bay as he fled.

Batman and Robin eventually stopped Thorne. The Crime Doctor was tryin to steal and use recent research in atomic physics. His interest in all things scientific had led to a plot to steal a device that could synthesise valuable metals.

In 1943, the imprisoned Thorne was summoned to save the grievously wounded prison warden. He performed the difficult surgery. He then seized the occasion to flee and resume his exciting activities. His new version of the Crime Clinic was housed in a truck trailer, travelling Westward through the US and offering short consultations.

During Batman’s second attempt at stopping the Crime Surgeon, Robin (Dick Grayson) was shot by a gunsel. Thorne and Wayne operated on Grayson and saved his life. The Crime Doctor had his gunman drive them to a hospital to ensure Robin’s survival.

In California, Dr. Thorne saw that the wife of a local criminal was very sick. Thus, he offered to operate on her. However, he also heard about an opportunity to steal a large shipment of gold on the same night. In a moment of weakness, the Crime Doctor chose the gold. While the Crime Doctor was running the heist, the sick woman died and the vengeful criminal blamed Thorne.

As Batman was arresting the Crime Doctor, the grieving husband shot Thorne dead. The Crime Doctor’s last words were to inquire whether Robin had properly recovered from his wound.

Earth-1 also had a Dr. Bradford Thorne who became the Crime Doctor. But although he was comparable to Earth-2 Thorne, he was active nearly four decades later.

After the Crisis, on New Earth, a man called the Crime Doctor soon emerged. But this person, Dr. Matthew Thorne, was a rather different animal than his pre-Crisis counterparts.

Doctor Thorne is addicted to the excitement of crime. While he may be able diagnose this pathology, there’s no way he can help himself. He just has to use his powerful intellect and scientific mind to help blundering lowlives pull off exciting felonies.

His other imperative is his Hippocratic Oath. Thus, Thorne will allow no physical harm to come to another as a result of his actions. If he stumbles upon a very sick or badly wounded person, he will simply drop everything to do his job. Even if there are dire implications in store for him such as being arrested or shot at.

He can threaten others with bodily harm (such as pointing a handgun at them and threatening to shoot). Whether he would actually do it is unclear – but it’s unclear enough for the threat to be credible.

Thorne had a good sense of marketing – distributing flyers with slogans to selected criminals, calling his office “the Crime Clinic”, etc.. Given his addiction, he likely wanted to develop his image as a greater-than-life, pulp-ish masked mastermind. It was exciting and he felt a buzz from being considered as an unusual, weird but impressive figure by hardened criminals.

(Acting as a consultant to defeat security and speaking to a hoodlum as if he were a surgical assistant) “First, we attract the watchman’s attention… like this ! Now, atomiser please, Ranson !”

“No ! I’ll tolerate no killings ! I’m a doctor ! A doctor saves life, doesn’t take it ! Now we’d best get going before the police investigate that shooting !” 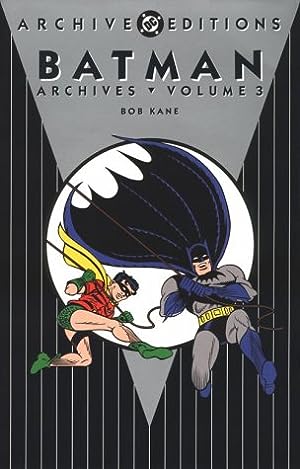 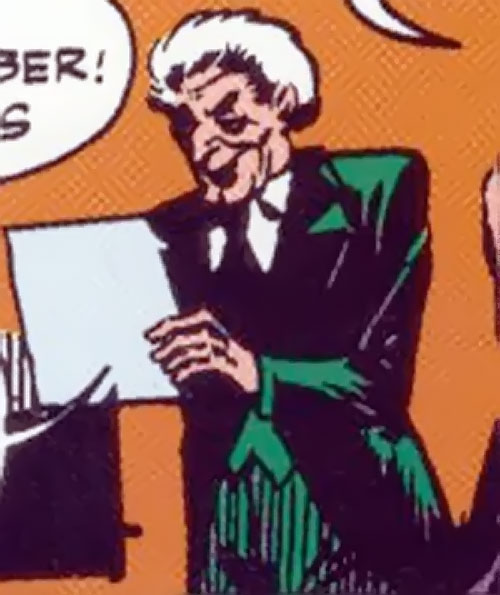 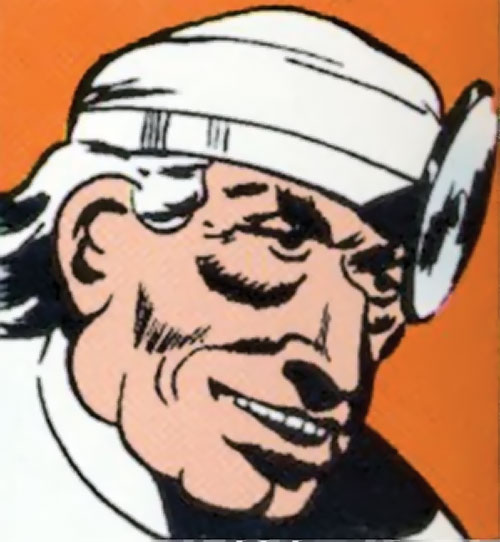 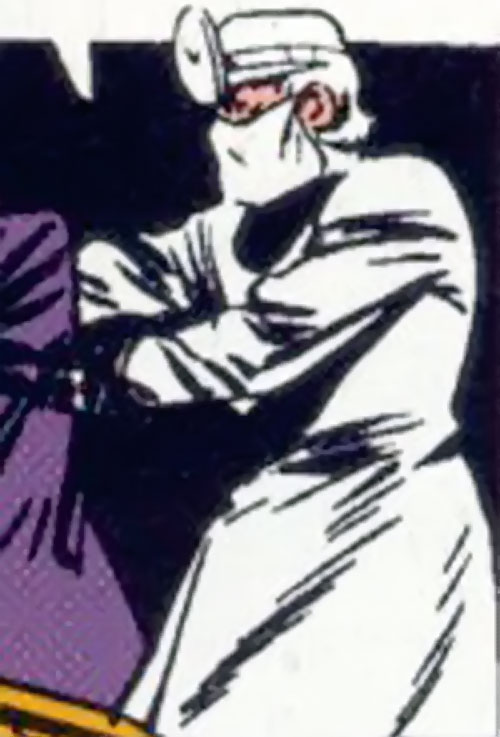