Though she wasn’t see much, Balcescu has the knowledge and technique to create entire batches of superhumans. This is super-useful for all sorts of game-scenarios. So her profile has some technical RPG discussion of it.

Doctor Balcescu is a superiorly intelligent physician and medical researcher. She also appears to have experience in decidedly less medical domains such as espionage, security and superhuman operations. Her primary medical speciality seems to be surgery.

Like most comic book scientists she’s a polymath in her field and beyond. Thus, she can work with bionanotechnology and other techs – though she seems to have a preference for wet tech.

The Crime Doctor is primarily interested in working on superhumans. She has created numerous low-grade superhumans as a Vesetech employee. She even had the opportunity to work using Doomsday DNA.

She also enjoys attempting strange and groundbreaking medical acts on superhumans, such as grafting Wonder Woman’s lasso all across and within Genocide’s body.

Vesetech drugs and tools were ubiquitous in pharmacies, drugs cabinets and hospitals. The corporation had close working relationships with corporate titans such as Wayne Industries or Lexcorp, and the US government.

Their R&D teams were very aggressive and well-financed. Much of the cutting edge medical work in the DC Universe uses Vesetech patents. That includes STAR Labs cybernetics (such as the one used on Cyborg) or the powerful enhancement drug Venom (once used by Bane and, briefly, by Batman and others).

Many of the Vesetech breakthroughs were revealed in 2008 to have been possible thanks to extensive, unethical and illegal tests on human beings. This is what gave their R&D teams an edge. Most of the test subjects were Mexican women kidnapped near the frontier, particularly in the Ciudad Juérez area.

Though Vesetech was a hugely influential lobbying concern, it was dismantled with remarkable speed by the US government. They were presumably concerned that investigation into Vesetech activities might expose some of its activities in the creation of superhuman agents.

Due to Vesetech’s involvement in cutting-edge metahumans-related work, it was not just doctors, patients and pharmacists who discovered that their tools and drugs had been developed in part through mass murder and torture. But also many heroes and villains.

Anica Balcescu is a Romanian citizen. Before the 1989 revolution , she was a member of the Ceaușescu regime. From what she said, one gets the impression that she narrowly fled the country during the uprising. Her husband, presumably another notable (perhaps a member of the Securitate ?) was killed by the revolutionaries.

Balcescu has unusual not-quite-medical skills. It is possible that her work for the Ceaușescus was developing some sort of Romanian super-soldier program.

Balcescu was snapped up by American pharma giant Vesetch. Their most efficient R&D practices were, ethically speaking, right up Balcescu’s alley. She spearheaded a research program that produced dozens of minor superhumans.

Amazingly, it would seem that it was actually a one-woman program. Dr. Balcescu was never seen working with any other doctor. She seems capable of performing complex surgeries alone.

Given the American propensity for garish code-names (Vesetech even had the employees she enhanced adopt unimaginative ones), Balcescu started calling herself the Crime Doctor. This was presumably after the death of the previous Crime Doctor, Matthew Thorne.

From what can be gathered, Dr. Balcescu was running the more cruel and murderous experiments on kidnapped Mexican women. The corpses were then dumped in the desert. The subjects receiving the experimental enhancements those deaths had helped develop seemed to be mostly American citizens. They may have been Vesetech employees.

No man escapes the Manhunters

This operation was uncovered by Manhunter (Kate Spencer), with the backing of Oracle’s Birds of Prey.

As it turned out, the US government had also been investigating what was going on. One gets the impression that Vesetech had been overplaying its influence and had crossed officials such as Amanda Waller, who were looking for loose ends to cut.

For months, a small Suicide Squad mercenary team had pretended to work for Balcescu’s department within Vesetech. In actuality, they were attempting to garner proof. Officially, the Squad had gone renegade and these men and women were now working for moneyed corporations, without any government ties or loyalty.

Balcescu, being used to the vicious double-crossings of the espionage world (perhaps due to her husband’s job) was wary about the Squad operatives from the start. She had covertly injected them with nanites. She could use those to trigger unconsciousness were the mercenaries to turn against her.

However, she had underestimated them. She did not know that they still had access to cutting-edge government tech. Waller’s staff had inoculated the Squad members with nanobots preventing this sort of infection.

When Manhunter and the Birds of Prey raided Vesetech labs, the Suicide Squad operatives had to break cover. Though Balcescu activated her nanocharges, it lasted but seconds before the Squad members’s enhanced immune system kicked in. They neutralised her and her security.

Balcescu was presumably arrested along with thousands of other Vesetech employees when the Federal government launched massive raids against key Vesetech installations.

The new Crime Doctor was later seen as a Society member. The Society likely recruited her in prison and freed her. She was one of the Society’s support staff and their top surgeon, working with other brilliant scientists such as T.O. Morrow.

In particular, Dr. Balcescu was the one who grafted Wonder Woman’s stolen Lasso of Truth throughout Genocide’s body.

Dr. Bacescu seems to be in her 40s. She is always wearing green surgical scrubs and gloves.

She has a bitter, sullen, haughty air and little interest in appearing attractive.

Dr. Balcescu’s main character traits seem to be bitterness, intelligence, cruelty and wanting to have her skills challenged.

Something traumatic happened to her when she was a teenager. Given the odd euphemism she used it seems that she was raped by soldiers. She’s been lashing out ever since, aggressively rejecting her own humanity and wanting to be as much of a soulless predatory monster as possible.

She seems to particularly enjoy torturing and killing women. She finds joy in being the predator rather than the victim this time around.

The Crime Doctor is smug, bitter and hateful. She thinks everybody around are cowardly, treacherous cretins who are going to end up hurting her. Therefore, she prefers to find way to have them in her power when the time comes.

Her mood will improve if she gets to do particularly difficult surgical work that tests even her skills, but her manners just never will.

“You assume I’m a nurse because of my sex ? How provincial.”

“You should all be proud. Your harvested parts will fetch top dollars.”

“Bring me the pretty one. Plastique. May be she will wake up while I’m working on her.”

(After Balcescu operates on Genocide)
Cheetah: “So, I understand you’re the new Crime Doctor, is that correct ?”
Dr. Balcescu (in blood-splattered surgical scrubs): “No, Dr. Minerva, I dress like this for fun.” (beat) “You know, this was the most repulsive and nauseating thing I’ve ever done to another living thing, and I quite enjoyed it.”

Bonuses and Limitations:
Gadgetry may be Limited to technologies related to biology or used on/within biological bodies.

Connections:
Balcescu may have developed a Low Connection with the Society.

Some abilities are hypothetical, since there’s little material on Balcescu so far.

The Crime Doctor mass-produced dozens of metahumans for Vesetech, and perhaps other customers.

There seemed to exist roughly three tiers of metahumans coming out of Dr. Balcescu’s lab – rank-and-file ones, solid successes and special projects.

The first two types are examples of a NPC not using the normal Gadgetry (or in this case Medicine (Enhancement)) rules. The Doctor is not going at it full blast to create something unique and powerful. She’s refining a prototyping process. Sometimes she rolls well and obtains a more potent subject.

Special projects, on the other hand, are the normal Hero Points-consuming process where. She’s trying hard and gets results that would be very difficult to duplicate.

The power level of the rank-and-file was generally low, and they usually had but one Power.

A good approximation is to decide that each rank-and-file specimen has 2d6 APs in one Power (don’t explode doubles). So they’ll tend to cluster around the 6-7 APs level with their one Power (Claws, Lightning, Running, Flame Project, additional APs of STR and/or BODY, Superseed, etc.).

Exceptional successes, assigned to key security tasks, can have 2d8 APs (you still have d8s from those days of longsword attacks in older editions of AD&D, right ?). This is because the Crime Doctor rolled high on those. One exceptional success could emit an energy blast that punched through four consecutive reinforced walls.

(Rank-and-file is a normal distribution with a mode one AP below her level in Medicine (Enhancement). The exceptional successes curve is one AP above.)

Assume that the rank-and-file and solid success subjects have all their baseline Physical Attributes at 03, and all the rest at 02 (and thus an Initiative of 007). Some may have better training or stats from their background.

But generally, despite being enhanced, they did not have what it takes to go up against genuine costumed adventurers such as the Huntress or Manhunter (Kate Spencer). None had any HPs, though some exceptional individuals in the solid success category might conceivably have five or so.

One special project was seen — a man enhanced using Doomsday DNA, which is the pinnacle of bioweaponry research. But there was too little material to assign stats, especially since Ms. Spencer obviously rolled several big doubles while fighting it.

Source of Character: Chiefly the 2004 volume of Manhunter. 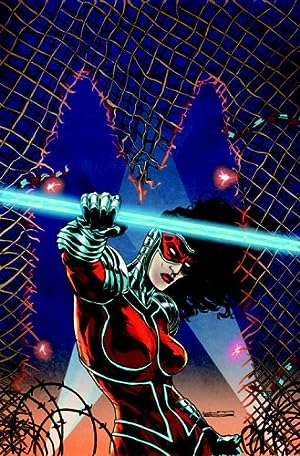 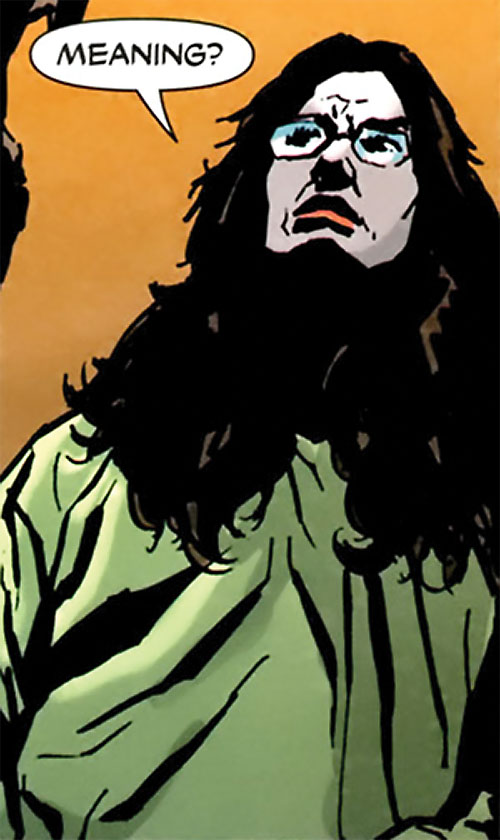 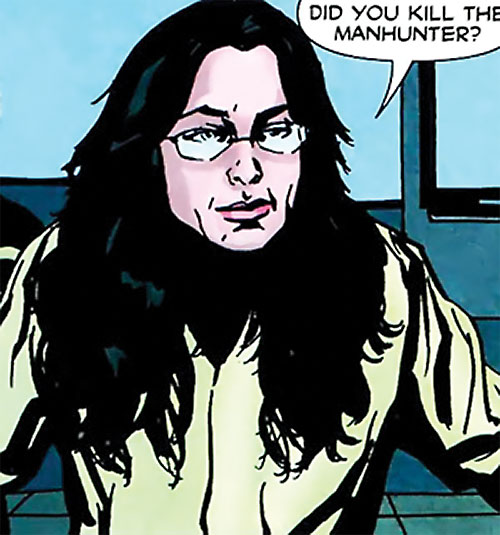