The Crime Syndicate is an evil version of DC Comics’ Justice League of America, coming from a parallel Earth. They first appeared in 1964.

There have been multiple versions of the Crime Syndicate over the various eras of DC Comics. This profile is about the 1964, pre-Crisis one.

For more about these eras, the Crisis, Earth-3 and similar notions, see our guide to the ages and Earths of DC Comics. If you’re not familiar with this stuff, the Crime Syndicate material will be puzzling.

This is a “base camp” team profile. So we don’t have to repeat the basic information in the individual member profiles.

Modus Operandi:
CSA members tend to operate on their own. There are few superhumans on their Earth, allowing them to overwhelm their opposition solo.

Extent of operations:
Primarily the Earth-3 United States of America. But they are capable of transdimensionalSomething that goes across two or more universes incursions.

Bases of Operations:
The Eyrie of Evil. This structure is located on an isolated peak in the Palisades Mountains (the Hudson River ones), not far from the Earth-3 version of Metropolis.

Major Funding:
Crime ! I mean, that’s right in the name.

Organizational structure:
Ultraman is sort of, kind of, the leader.

Membership requirements:
Being a superhuman criminal from pre-Crisis Earth-3.

The members rely on their individual powers and equipment.

Heh, Manfred Mann. Their cover of Doh Wah Diddy Diddy (no, it’s not a deep song) had a curious staying power.

Living in another world

On Earth-3, History repeats itself in a reverse way ! Columbus was an American who discovered Europe ! Colonial England won her freedom from the United States in the Revolutionary War of 1776 ! Actor Abe Lincoln shot President John Wilkes Booth !

And here every one of the rare superbeings — Johnny Quick, Owlman, Power Ring, Superwoman, and Ultraman — is a supervillain. These are part of a group called the Crime Syndicate of America (CSA) !

And yet, Earth-3 generally looks like the real world of the 1960s. Perhaps having every detail of History “flipped” results in little meaningful difference in the end.

We don’t need no steenkin’ plan

Furthermore, the CSA is unambitious. They use their powers for petty crimes – mostly theft. So their impact on their world is negligible.

The police only occasionally tries to stop them. The CSA is too hard to handle and doesn’t do that much damage. Unlike later versions, they are closer to being major nuisances than awful threats.

The CSA’s plans are fairly simple, despite being formulated by a man with a super-brain. The police’s plans to stop the CSA also are oddly tepid.

This simplicity likely results from early 1960s super-hero storytelling. But it is possible that something about Earth-3 makes strategic planning more difficult there. 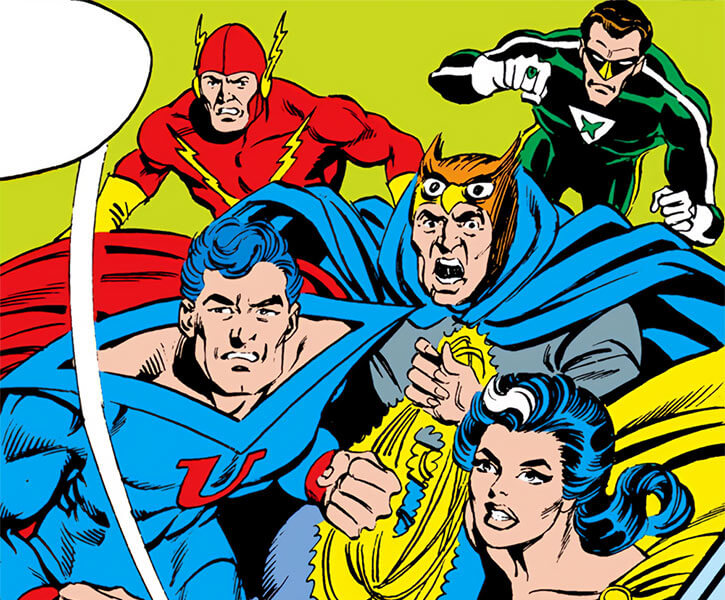 I wanna hold ’em like they do in Texas plays

There’s an odd sequence where the heroes are able to determine where the next trap of the Syndicators is by reading their facial expressions. It’s like they *all* have the opposite of a poker face.

As in the section above, it could simply be an effect of dated, simple writing. Or it could be diegetic  . It’s hard to say.

A simple explanation is that they’re so privileged that they have no experience with having to hide their emotions and thoughts. After all, they live in a world where nobody can deny or stop them. It’s not established, but it’s credible.

If you decide to use that interpretation, they have a -2CS OV/RV penalty if they ever attempt to conceal or fake their reactions.

During the Crime Syndicate of America’s first battle against the JLA, each group is at a disadvantage when fighting in their opponents’ native universe. They can’t “summon up [their] full power”, states a helpful orange caption.

For this reason, the CSA chose to fight the JLA on Earth-2 for their final battle. There, no one would be at a disadvantage. The CSA could thus demonstrate its superiority in a fair fight.

In the CSA’s subsequent adventures, these penalties no longer existed. Perhaps the multiverse was altered by a cosmic crisis on, say, Earth-C – and nobody noticed.

Equivalent but not equal

The villains in every version of the Crime Syndicate are direct counterparts of heroes in the Justice League. Yet the Pre-Crisis versions were nowhere near as capable as their doppelgängerEerily exact double of a person. Often supernatural and evil. – with the exception of Ultraman.

The other Syndicators were often quickly defeated when facing their better selves. During their introductory appearances, they struggled even against mundane foes. This was apparent to them — Owlman’s initial plots to defeat the Justice League were built upon the assumption of their inevitable swift defeat in direct confrontations.

Later versions of the CSA were more equal matches to their counterparts.

Without other superbeings to test themselves against, the CSA became sloppy. But in 1964, Ultraman gained the power to see other dimensionsOther realms of existence that are not our universe. He thus discovered the CSA’s heroic counterpart, the Justice League of America (JLA), on Earth-1.

The CSA went on a Earth-1 crime spree, stealing many of the fine American dollars. The Justice League responded in one-on-one fights, and gained the upper hand. But Owlman and Power Ring had prepared a magical trick. It unexpectedly took the JLA to Earth-3.

Still dazed by the trip, and unable to focus while on Earth-3, the JLA was promptly defeated.

The confident CSA decided to prove their superiority by fighting the JLA on Earth-2, where neither team would be advantaged.

But here again there was a contingency spell. Stating that they had won whisked the JSA members to Earth-3 in a daze.

The CSA then attacked the JLA in a Earth-2 desert… and was beaten.

By that point the League was expecting another contingency spell. And indeed, freeing the JSAers would devastate both Earth-1 and Earth-2. The JLA dismantled these traps.

The CSA was then unceremoniously dumped into an otherdimensionalLocated in another reality jail. They were left to languish in limboA kind of dimension where time doesn’t pass. Signs in numerous languages warned travellers not to free them.

Man from the future

In 1978, a “dimensional storm” allowed Johnny Quick, Power Ring, and Superwoman to break free. They returned to Earth-3.

However, Earth-3 was being accidentally invaded by Earth-1 super-villains chased by Captain Comet (Adam Blake). These newcomers attacked, stealing CSA gear. They used it to reach Earth-2, their actual destination.

The three CSA members nevertheless went on a robbing spree. But Power Ring’s backup battery was defective, turning nearby people into monsters. Captain Comet thus had to take them down.

Comet then used the power battery to return the three Syndicators to their limbo prison.

By 1982 Ultraman had escaped, returning to Earth-3. He ran into Earth-1’s Lex Luthor and Earth-2’s Alexei Luthor. The pair had fled to Earth-3 to escape from Superman.

Ultraman was apparently defeated by Alex Luthor, and presumably returned to his prison in limbo.

The whole CSA was freed by the time-traveling Per Degaton. He had a complex plan involving Earth-Prime, Earth-1 and Earth-2. Degaton would thus take over Earth-2 during the 1940s.

The CSA was sent to steal nuclear missiles on Earth-Prime, during the 1962 nuclear crisis  . The theft would result in a nuclear war ravaging Earth-Prime, but Degaton cared little.

Once the missiles were secured, the treacherous Crime Syndicate tried to mutiny. But they were banished 20 years into the future.

This is how they popped up on the Earth-1 JLA’s satellite headquarters. This arrival took the League by surprise, allowing the Syndicate to defeat them.

The CSA then stole a shuttle to go planetside. However, before they could do much, Per Degaton caught up with them.

He had the Syndicate serve him anew in the 1940s of Earth-2, lest he dump them all back in their Limbo prison. The Syndicators grudgingly agreed. This led to them fighting members of the JLA, JSA and All-Star Squadron.

After those clashes the heroes fully understood Degaton’s plan. They therefore travelled to Earth-Prime in 1962, and defeated the Syndicate before they could steal the missiles. The Earth-3 criminals were shoved back in their Limbo prison.

(Presumably, the CSA has no memories of the bulk of these events. Since from their perspective most never took place.)

Radio reports on Earth-3 indicate that the CSA eventually escaped their prison yet again. Ultraman and Owlman were arrested after attempting to vandalize the Statue of Liberty.

They were placed in the Superhuman Rehabilitation Program initiated by now-Vice-President Alex Luthor. The rest of the CSA had apparently already been captured and enrolled in the program (Swamp Thing #154).

The CSA had left the rehabilitation program and returned to their criminal ways by the time of the Crisis.

As a result, they were free and still villainous when the wall of anti-matter reached Earth-3. The CSA was helpless to stop the wall. They perished along with their world.

A new version of the Crime Syndicate of America appeared after the Crisis. It was first seen in 1999, in Grant Morrison’s Earth Two graphic novel.

A version of the original Crime Syndicate was glimpsed during the Convergence event, fighting for Deimos. 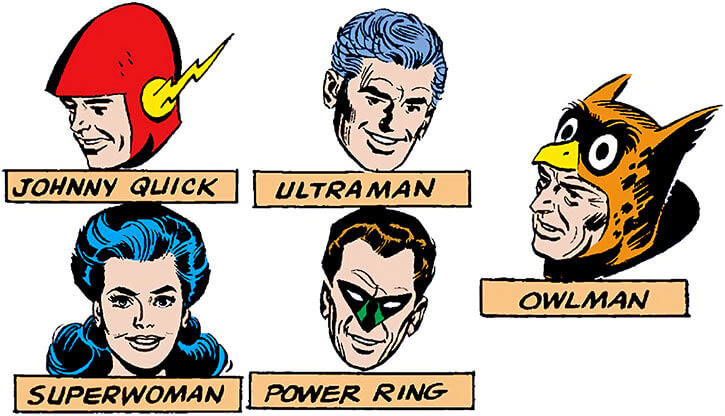 These rules only applied to the first CSA story.

The CSA had a -1CS penalty to all AVs, EVs, OVs and RVs while fighting the JLA on Earth-1 and the JSA on Earth-2.

Furthermore, all Hero Points expenditures were penalised by two Genres.

The JLA had the same penalties when fighting the CSA on Earth-3. 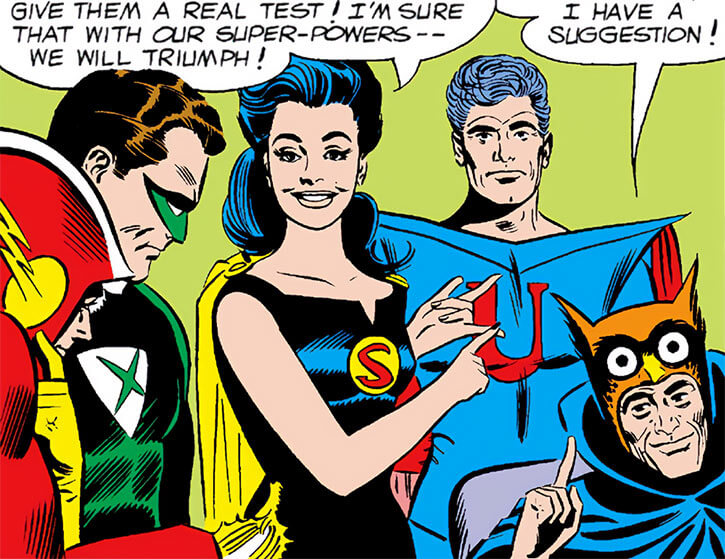