Criminal is a collection of unpredictable crime stories, written by Ed Brubaker and drawn by Sean Phillips. This comics project started in 2006, and continues as of 2019.

Jacob Kurtz appears in the story Bad Night (Criminal v2 #4-7). This profile S P O I L S everything about it. Which is bad, given the comic’s nature.

Kurtz is an expert forger, cartoon artist and analyst.

Without knowing it also an expert detective and marksman.

The Man Who Disappeared

“You should have cleaned that bruiser’s clock, pal. Shoulda‘ given ’im the old – one two.”

“It’s closin’ in again, isn’t it ? It’s all closin’ in… damn it. It was those bums. They set you up. Danny wasn’t gonna kill you, he was gonna hang you out to dry. He just didn’t tell the twist of his plan.”

“Don’t see what this is ’cause yer too close to it. Don’t be a blind fool, Jacob. You’ve already made too many mistakes… don’t miss what’s right in front of yer peepers.”

Frank Kafka is a popular comic strip character in the local newspaper. He’s clad in a trenchcoat, broad hat, white shirt and a tie and often seen with a grin on his face. He is a traditionally hard-boiled private detective, and his speciality is to take much more punishment than he can deal out.

Frank deals with truly odd cases. The episodes seemingly deal with quite a lot of psychological and metaphysical ideas and questions.

(Kafka is also reminiscent of “Slam” Bradley, a DC character whom Brubaker used during his Catwoman run — Ed.)

Frank is also a crack-shot, has a deductive, analytical mind and a strict, no-nonsense attitude about everything. He talks in a 1930s fictional tough cop manner. Drawing and selling Kafka comics to the newspaper seems to be Kurtz’s main source of income.

However, the full truth is more horrible than that. What Kurtz has never realized is that he is a schizophrenic. He occasionally has bouts of actually being his fantasy creation, Frank Kafka, hard-boiled private investigator.

During such episodes (in DC Heroes RPG terms, Psychological Instability) Kurtz has no memories of his actions. As a consequence, others’ later reactions to him will sometimes puzzle him.

While Kurtz usually believes himself to be physically weak and ineffective (in game terms, restricting Hero Points use to mental activities and his Skills only), he will be very effective as Kafka. The Kafka persona also has access to more skills, is more determined, and might not suffer from Jacob’s physical handicaps.

When Kurtz is stressed out he will often hallucinate seeing Frank. Say, in the backseat of his car. Jacob may even even hold discussions with him, thinking little of the weirdness of it all. Frank occasionally also shouts out warnings or advice to him. Others often wonder who Kurtz is talking to.

Kurtz started to realize the truth about his condition. He had previously believed that he was the victim of extremely unlucky circumstances, when the truth was actually that he himself had caused all those actions as Frank Kafka.

Once he had realized the truth he very likely had the Guilt drawback about having involuntarily caused his wife’s death, his own health issues and a lot of other problems.

Jacob Kurtz probably used to be a happily married man in Center City. But he also he was heavily involved with criminal elements, being a master forger. 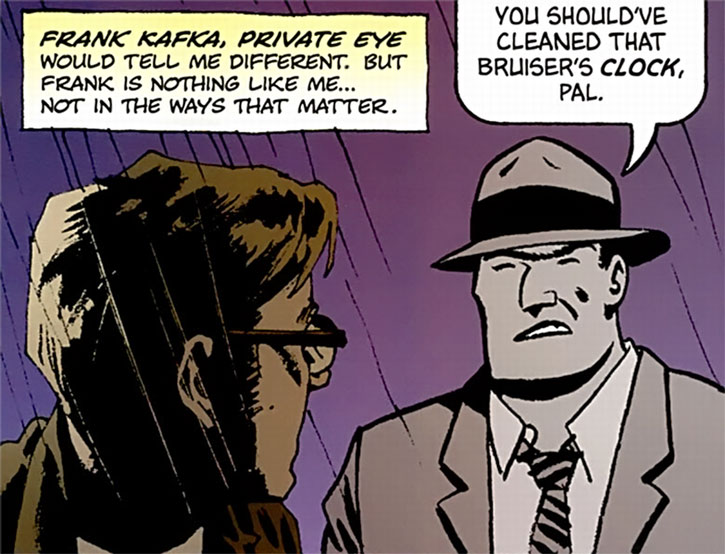 Then one day his wife disappeared. And the police were certain that he had murdered her. In particular, a detective Max Starr violently interrogated him to get at the perceived truth.

When Kurtz was released the uncle of his presumed dead wife, crime boss Sebastian Hyde, sent goons to punish jacob. This nearly killed him and left him disabled. Kurtz also had a complete mental breakdown.

After he had slowly recuperated, he started drawing a comic strip – Frank Kafka, Private Eye. He tried to put his criminal past behind him, but was constantly harassed by Starr who attempted to extract the truth from him.

Eventually, two years after Mrs. Kurtz’ disappearance, she was found in her wrecked car in a ravine. Kurtz was finally proven innocent. As Hyde realized his mistake he saw to it that a newspaper bought the Frank Kafka comic strip. It soon became popular, particularly within the city’s underworld crowd.

Kurtz had a little revenge on Starr by putting him into his comic as “Officer Wrong”. This angered Starr and motivated him to dig deeper; as he still thought Kurtz guilty.

Kurtz also had a visit from Tracy Lawless, a childhood friend. He needed a fake I.D. and paid well, and Kurtz had little choice but to accept the job. However, as he tried to bank the money he was arrested for bringing in counterfeit money. This again brought him to police attention, though he was released.

A local, former crack-house close to where Kurtz lived went up in flames. Then a red-headed beauty named Iris and her psychopatic boyfriend Danny entered Kurtz’ life. After a torrid affair with Iris, who found out his former occupation, the boyfriend requested a fake F.B.I. ID card. 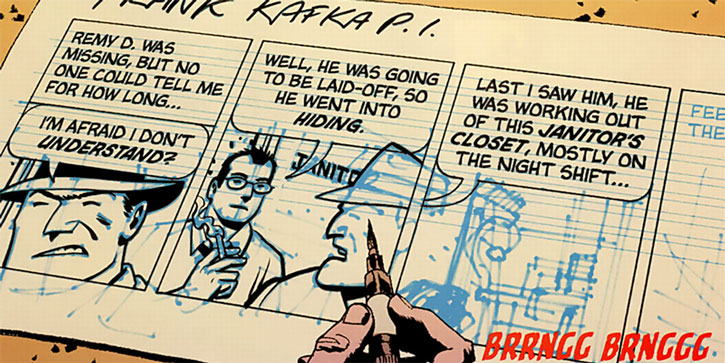 Danny then used the fake card to pick up a bribe from the Yakuza. These were expecting to pay a corrupt F.B.I. officer that Danny had killed. But once the heist was complete the situation went chaotic. Iris killed Danny, and she and Kurtz hid the body. Iris left soon thereafter with half the money.

Soon, detective Starr showed up again asking questions, but this time about a dead F.B.I. agent. Starr also retrieved Kurtz’s gun for a ballistics check. Kurtz went to check up on Danny’s body, which was still where he had left it, and then went to find Iris.

He eventually tracked down Iris and found her with Starr (!). At this point, Kurtz realized that she also had been his nurse while he had been catatonic and in rehabilitation earlier.

What had happened was this. Starr had met a F.B.I. agent named Maurer. The detective found that the agent was severely corrupt and dealing with the Yakuza. Starr came up with the perfect plan.

First, Starr killed the bagman that was Maurer’s Yakuza contact. Then Starr would hire someone to complete the deal with the Yakuza, who didn’t know what the F.B.I. agent looked like. This would be done using a fake I.D. manufactured by Kurtz.

Kurtz would be easily manipulated by Starr’s girlfriend Iris. She happened to know Kurtz from his rehabilitation days and Danny was another bad inmate from those days. This way Starr could finally expose Kurtz and get him behind bars!

However, as Kurtz had seen the two of them together he desperately tried to break into Starr’s apartment to find counter-evidence to save himself. But Starr came home early, caught him and beat him up. The detective, happy that everything was going according to plan, ignored Kurtz’s plea that he was innocent.

Starr started calling in backup when Kurtz, inspired by Frank Kafka, shot Starr using his own gun – which he had grabbed during their fight. But Kurtz believed that Kafka was standing next to him, and that he had shot Starr to death.

Kurtz saw to it that Starr’s body disappeared, and then he tracked down Iris. He also left Starr’s cellphone by the dead body of the F.B.I. agent.

Having found Iris, Kurtz went home only to find the police waiting. Somebody had seen him torch the old crack-house.

Kurtz finally realized that he had, indeed, torched the crack-house as Frank Kafka. He also remembered that he had now put Iris in the trunk of his car and then took her for a wild ride. Kurtz knew that he had in fact driven his own wife away as she tried to escape from Frank Kafka, and that he actually was partly guilty for her death.

Kurtz, a broken man, deliberately crashed down a ravine with Iris in the car. Iris may have died in that crash, but Kurtz woke up again in a hospital with severe trauma.

The newspaper editor came by to introduce the new kid that would going to take over the Frank Kafka comic strip. Frank Kafka also left the room with the editor and the kid, leaving Kurtz all to himself, free of any legal charges, but filled with guilt. His problems are far from over.

Kurtz is a non-threatening male with glasses and a pair of crutches.

Kurtz is trying to turn a new leaf and leave all criminal activities behind him since the death of his wife. This is, however, difficult due to several reasons: insomnia, his well-known skills and schizophrenia. 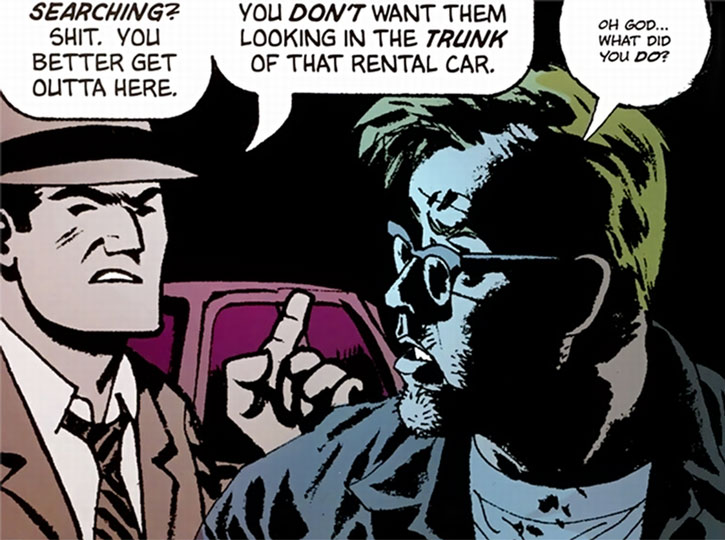 People still look him up now and then to get him to do a forgery of some sort or another. Given his poor financials he usually has to agree as it pays well.

Leading a hermit’s life, which may be the easiest given his poor physical and mental health, Kurtz has no real friends.

Kurtz is also an insomniac and only sleeps for four hours when his body collapses around sunrise. This is enough for him to function normally. When he has not slept at all he will be unfocused, himself referring to those days as lost days.

His mind always races, never giving him peace of mind. This is why he has given up the thought of normally just going to bed to sleep. When he wakes up, or when he can’t sleep at all, he drives into the city. Everybody knows him since he’s a regular customer in a lot of places.

Kurtz’ main problem, however, is schizophrenia. It has controlled his actions for many years without him being aware of it. While Kurtz appears ordinary to those he briefly interacts with, this is far from the truth.

His second personality, Frank Kafka, surfaces at inopportune times or during stress. This can be detrimental to his relationships or activities.

It’s not that Kafka is a bad person, because he isn’t. It’s because Kafka severely over-reacts towards threats sometimes with lethal results. Of course, Kurtz remembers nothing of this, but these things eventually come back to haunt him in one way or another.

“And then I knew I was sunk… that my stupid choices, my stupid bragging… my general stupidity… had brought this on. I had done this to myself. But I had no idea how bad it was… that I wasn’t just sunk… I was drowning.”

Notes:
Detective, Thief (Pickpocketing) and Weaponry (Firearms) are Kafka’s skills and Iron Nerves is Kafka’s advantage (see below). as such, they’re usually not accessible by Kurtz (only during GM fiat and during an episode as Kafka).

Drawbacks:
Serious Psychological Instability (Schizophrenia), MPR (Limp; unable to run and can only walk slowly with a limp and with crutches, MPR (Myopic).

It is possible — but not demonstrated — that the Kafka persona had BODY 04, two or three APs of Martial Artist and no Physical Restrictions. 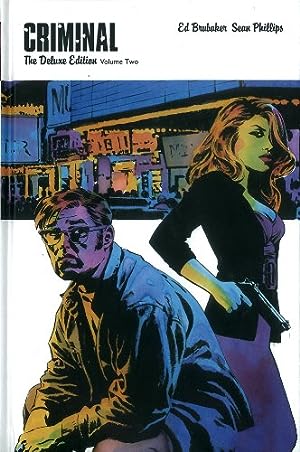 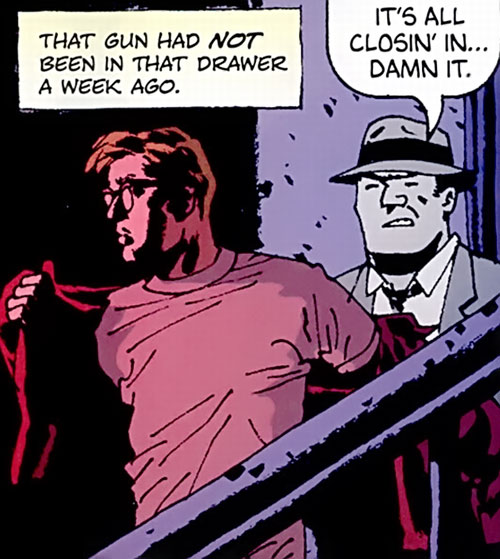 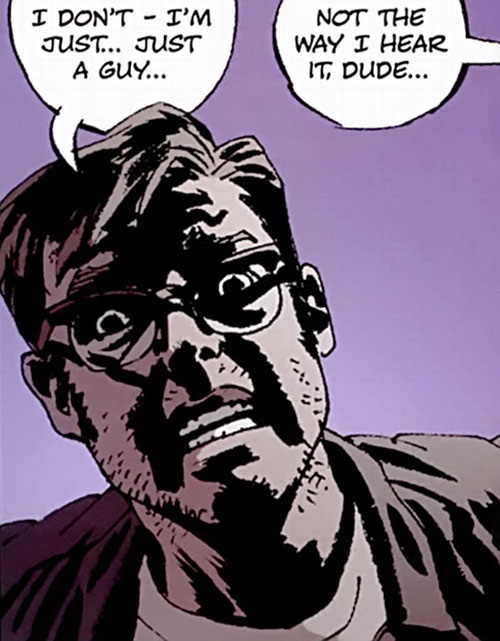 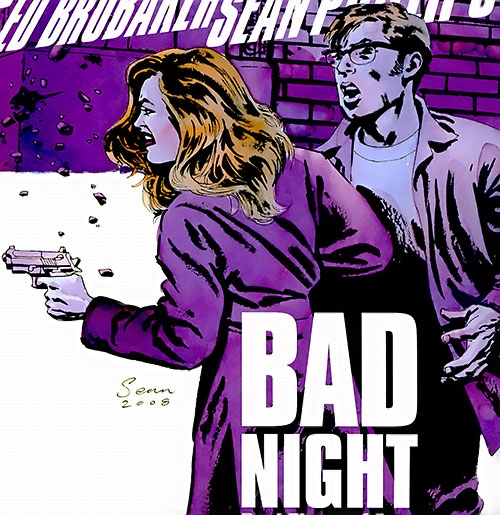 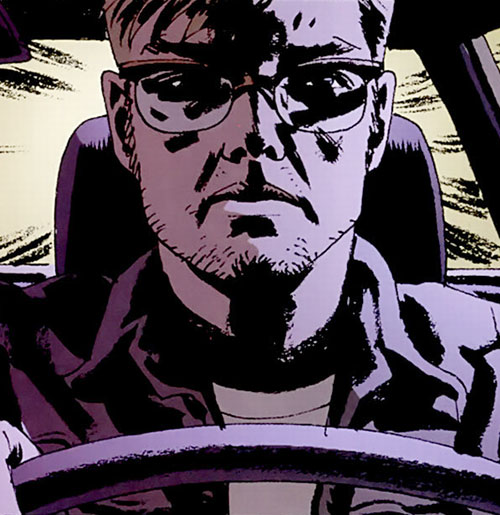 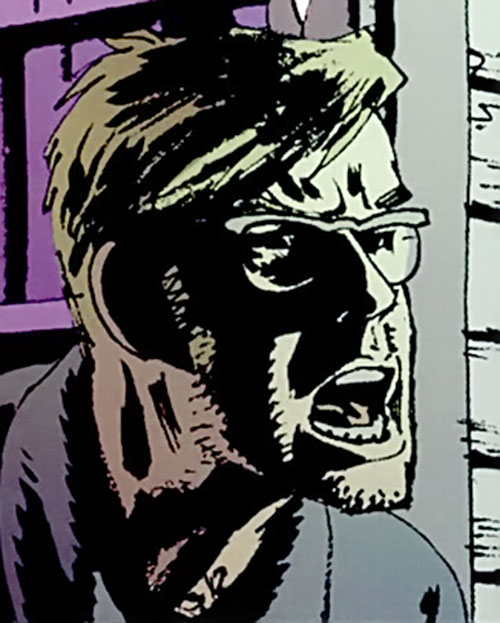 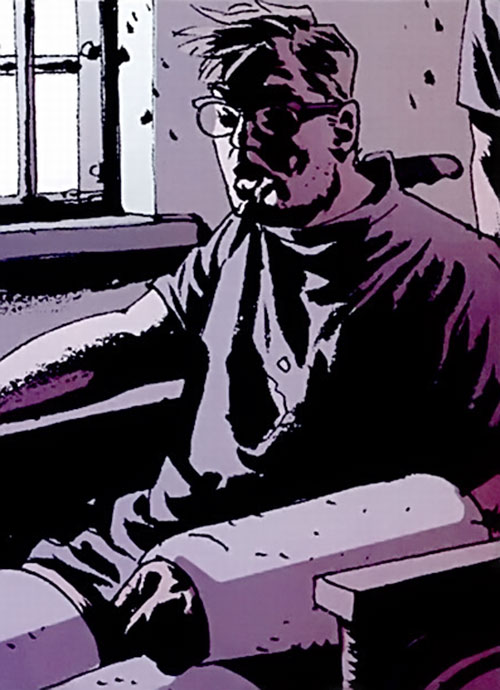