Crimson is both Gen-Active and of Kherubim heritage. Her powers manifested by giving her incredible speed.

Her mother trained her in the martial arts. She was skilled enough to surprise Backlash and throw him away when they first trained together.

In 1980, Marc Slayton, aka Backlash, was on shore leave in Japan while visiting his girlfriend, Lynn Morinaka. While he wasn’t aware of it, nine months later, Lynn gave birth to twins. She knew that Kaizen Gamorra would take interest in those children, but only managed to get Jodi into hiding.

Jodi lived by her mother until she fell ill and died. On her deathbed, Lynn told Jodi of her father and who she should contact to get in touch with him.

Immediately after her mother’s death, Jodi contacted Cyberjack. Soon, she paid her father a surprise visit. They started to get to know each other. These happy moments didn’t last long as Backlash was attacked by Bloodmoon and his faithful Kindred. They who wanted to avenge the massacre of Caballito Island. While held as hostage, Jodi manifested her speed powers.

Dingo betrayed Bloodmoon and helped them escape. That’s when Jodi met Taboo (Amanda Reed), too. She immediately adopted Amanda as her second mother. Jodie tried hard to smooth the wrinkles in Amanda and Marc’s relationship.

When they relocated in Colorado, and with the help of Taboo, she designed her red costume. Morinaka asked her father to join his team. Slayton refused to put her at such risks. Anyway, while Backlash was at large, chasing LeGauche and the Gen-Factor to Gamorra, Jodi and Amanda went to the rogue nation to rescue Cyberjack.

That’s how she got involved in the ’Fire From Heaven’ episode. There, she met the Gen 13, and teamed with them to defeat Gamorra, then Damocles. She also learned from the dying Cyberjack that she had a twin brother. His name was Aries, and he had been abducted soon after his birth.

Afterward, they went into hiding. That lasted ntil the Chasers, bounty hunters formerly employed by the government to capture Backlash and Taboo, contacted them. They let Slayton et al. know they had an amnesty – provided Taboo was willing to testify against government agents involved in Daemonites’ affairs.

Once Backlash and Taboo were cleaned of charges, they were recruited by Department PSI.

When Backlash joined Department PSI, he sent Jodi to a boarding school, to keep her out of trouble. It didn’t last long. Soon, while visiting a museum, the D’rhan crisis showed up. A mad human wizard attacked the museum, to steal manuscripts that would free the powerful aliens, trapped beneath the Mediterranean.

With the help of Azrum, they managed to teleport out of the battle zone, to go to Backlash. After a first failed attempt at containing the D’rhan, Department PSI founded the WildCore team – which included Zealot.

During WildCore’s existence, Jodi fell in love with Styrian. But he was killed after the whole team was projected in Tapestry’s alternate dimension. WildCore was attempting to prevent her to complete her control over this world.

Latest news about Crimson show her active as Jet in the Gen-Active mini-series.

Crimson is a small teenager. She wears an all red spandex outfit (hence her callsign) with big boots.

She is overenthusiastic about being a super-hero. She often confronts her father on this subject.

She likes Amanda and wishes all the best for her and her father. She loved Cyberjack like a member of her family and was much affected by his death.

As she was affected with the whole ’Fire From Heaven’ crisis (meeting teenagers with powers like her, seeing Cyberjack, and later Deathblow sacrifice themselves…).

“I bet Gen 13 doesn’t stay under house arrest while the world is in danger.”

Crimson is best used along with Backlash. 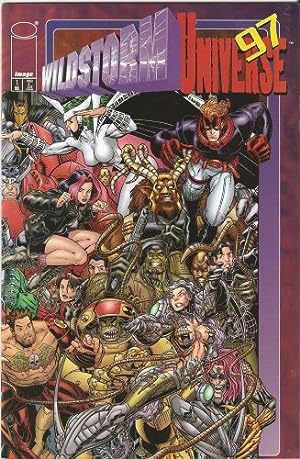