An agile and capable unarmed combatant, Justine has access to some advanced technology, such as the Cowl.

Cybernetically controlled, this prehensile cloak moves and reshapes itself according to her wishes. It may disguise itself as regular (crimson) clothing. In battle it can whip out to strike opponents (at distances of around 30 feet), grab and constrict them, lift and throw them, or form blades on which to impale them.

It also allows her to float in the air, and teleport herself and others, usually emitting a blinding light as she does so. While I can’t find clear evidence that they can be used individually, there are a few situations where it’s likely she teleported without any light.

The Cloak may also be controlled remotely, or be programmed with a set of actions. Following the failure of her first big job, she managed to switch places with a captive so that when Moonstone caught her crawling from the wreckage, it was no longer Justine in the cowl. It’s unclear how long she was out of sight, and so how difficult a manoeuvre this would have been.

Justine Hammer is the daughter of businessman and criminal Justin Hammer. She first came to prominence when the Crimson Cowl assembled a new Masters of Evil in the wake of the disappearance of the world’s pre-eminent heroes.

The Masters’ activities in New York brought them into conflict with the Thunderbolts and the Black Widow. But the Cowl always teleported them away before they could be apprehended.

When the Thunderbolts were revealed as disguised villains, and were on the run, she found them and offered them a place in her team. They nearly agreed, until the Cowl pushed too hard, at which they rebelled and attacked.

Fighting about the weather, part 1

The Thunderbolts continued to harass the Masters, intruding on the test of weather controlling technology Cowl had organized over a small town. The Thunderbolts protected most of the citizens, while the Cowl overpowered Citizen V (Dallas Riordan), who’d also been investigating.

Hawkeye took charge of the Thunderbolts, with his first course of action being a promise to deal with the Masters, made on national TV. The Cowl ignored him, putting her weather control technology into use on a global scale, trying to force the world’s governments into paying a huge ransom.

For this operation she expanded the Masters roster to 25 super-villains, based in her secret headquarters in Boulder, Colorado.

Moonstone turned up during the operation, claiming she’d changed her mind about joining. Unable to trust her at such a critical time, the Cowl had her placed in a cell. Moonstone attempted to prove her loyalty by revealing the Thunderbolts had infiltrated the base.

While the majority of the Masters battled the Thunderbolts, the Cowl took a couple with her, along with the bound Moonstone, in an escape craft from which she could control her scheme. Moonstone freed herself, however, and subdued the Cowl and her flunkies, ending the plot. 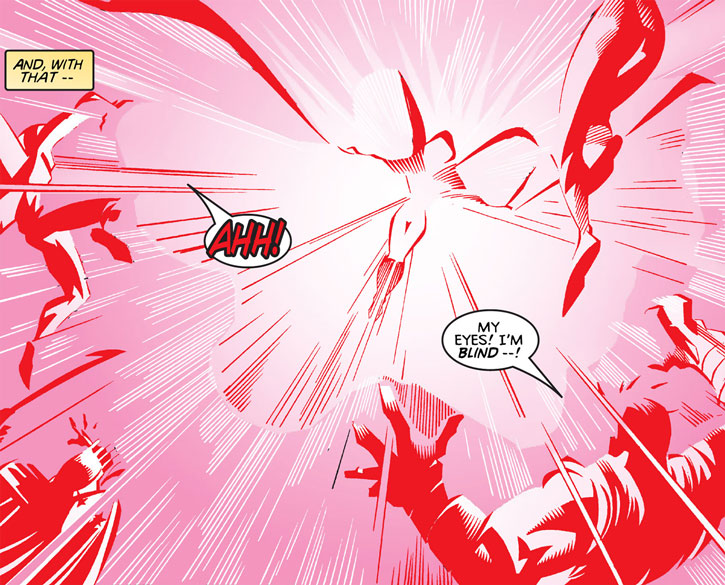 When the Cowl was unmasked, however, it was Dallas Riordan wearing the suit, who then went to prison for Justine’s crimes.

Riordan was sprung from jail by the V Battalion. But when she later fled from them, seeking sanctuary with the Thunderbolts, the cowl appeared and teleported her away, leaving her imprisoned within Justine’s Symkarian villa. Riordan eventually escaped her cell, and attacked the Cowl, the fight ending with Riordan falling from the helipad balcony into a river far below.

Following her father’s death, part of Justine’s inheritance was details of a plan he’d had in effect a long time. Every villain the older Hammer had ever employed (and allegedly other super-humans he hadn’t) had been secretly given a biological toxin which would allow them to be controlled.

To utilise it however, she needed Plantman’s powers. Mentallo, her father’s asset in Seagate was also partially aware of the weapon, and had arranged a prison break involving Plantman and Hawkeye.

Forming a new Masters of Evil, the Cowl let Hawkeye, Plantman and Songbird hunt her down. Working for S.H.I.E.L.D., they knew only sketchy details of the weapon. But they learned enough by the time they were facing off with some of the Masters to convince them that Justine’s plans weren’t in their best interests. These switched sides to join Hawkeye, adopting new identities.

Hawkeye’s group eventually tracked Justine to her villa. But her remaining Masters got the drop on them, and she began to experiment on Plantman (now calling himself Blackheath). However he resisted her, and her prisoners proved less than secure. They escaped and overwhelmed the Masters.

Justine’s resistance proved even briefer, as Skein (formerly Gypsy Moth) unravelled the cowl with a thought.

Justine was taken into S.H.I.E.L.D. custody, and imprisoned on the Raft detention facility (where male and female prisoners are apparently housed on the same blocks). She’d managed to sneak in a few threads of the cowl. But it could only be used to teleport a small distance, since she didn’t actually try to teleport herself out of the prison. 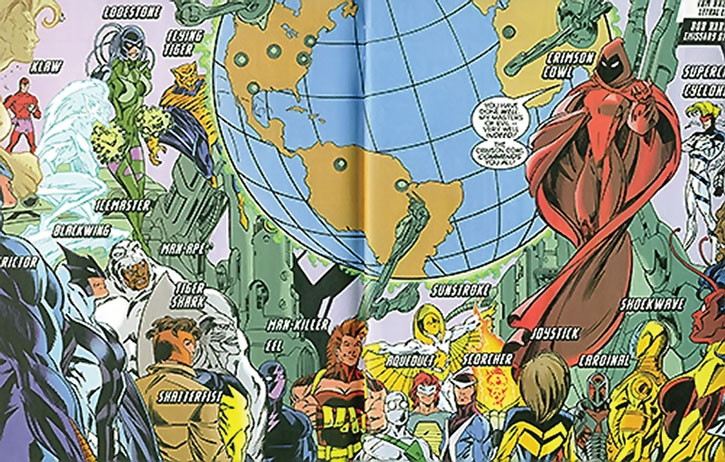 Hammer took part in an attempted jail break, teleporting to the control centre to open the cells. The prisoners had been using the arrival of new inmate, Robbie Baldwin (Speedball) as a distraction. But he used his evolving powers to subdue all of them, and Justine was apparently locked up again.

She was free again a short while later, with a new cowl. She was one of the super-villains at a weapons sale run by the Owl, which the Hood used as a stage to announce himself the kingpin of super-powered crime in New York. Justine was later seen among the Hood’s gang, and had lent him one of her spare cowls at one point.

Ambitious, aristocratic and ruthless, Justine is calm and controlled in all situations. A clear-headed strategist, while Justine prefers to direct her henchmen from a distance, she has little hesitation joining the fight herself if necessary.

However she’s always focused on her current goal. So if a fight serves no purpose, or its continuation would prevent her goal being achieved, she’ll teleport her underlings away. A businesswoman, she manages her team in much the same way.

“I am Crimson Cowl, sir — and I do not explain myself ! Nor do I remain in useless battle when my objectives are no longer obtainable.”

“Good morning, Hawkeye. I am the Crimson Cowl. And I am not amused by your making political capital out of threatening me — or my associates. Perhaps you thought to disturb my plans by challenging us. If so, you have failed. My plans proceed on schedule. All we have done is to draw you into them — where you will die, and bother us no more !”

“I honestly expected more resistance out of them. I imagine that one day I’ll learn to not be disappointed by the failures of others.”

“My father was Justin Hammer. But that was not the luxury you might expect. He demanded… more… of me. He forced me to earn my keep — prove I deserved to be among the elite. I assumed this persona — created the Masters of Evil — all to succeed where he failed — to use the superhuman community to accumulate physical power and influence the entire world ! With his death I inherited the wealth he’d long denied me — but I still plan to fulfil the lofty expectations my father had for me.” 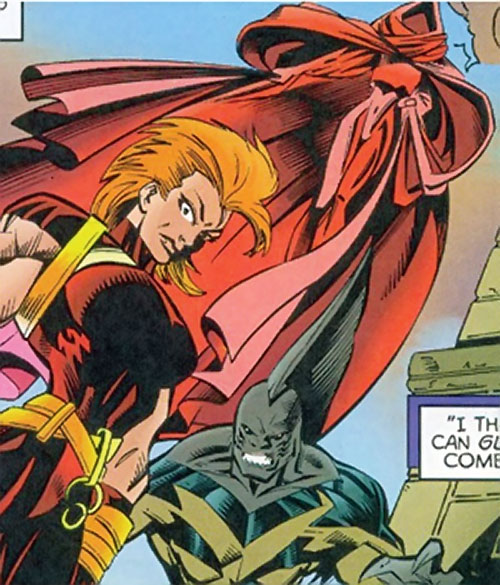 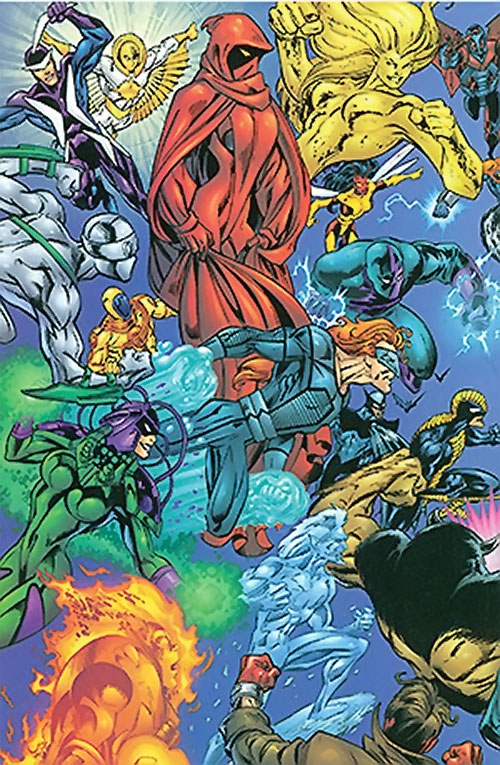