As members of the Clan Destine, both Rory and Pandora will enjoy an extended lifespan. Their aging rate will slow dramatically once they have reached physical maturity.

Rory and Pandora are unique amongst the Destine family in that their abilities manifested long before adulthood. This is because they are twins.

Rory’s gifts allow him to control and manipulate gravity. When reducing gravity, the Crusader can achieve high speed flight and levitate heavy objects. These can be as heavy as a car, but lighter than his brother Walter when he grew to a massive size.

When using his ability in the opposite manner (increasing the effects of gravity), Rory can:

Pandora can project and manipulate beams of focused coherent light. She usually manifests this as beams of powerful light capable of pulverizing boulders. Imp can also do focused beams of laser radiation that can instantly cut through solid steel.

She also recently discovered that she can bend light around her body and other objects in order to make them invisible. In addition, she can create a brief flash of bright light that can illuminate a limited area and blind those who see it.

Rory and his twin sister, Pandora, where born a part of the Clan Destine. These are children of Adam Destine and a creature of pure magic (a djinn). They were born presumably in the mid-1980s, right after the “Relative Strangers Protocol” was implemented by the Clan. The Protocol meant that the family members estranged themselves from one another, to kept their superhuman powers a secret.

The twins were raised by their guardians, Walter and Florence. They were led to believe that these were their uncle and grandmother. Not knowing their true origin, the twins believed themselves mutants, as their powers, heightened by each other’s proximity, developed early.

Rory convinced Pandora to follow him in becoming super-heroic champions of justice. However, Pandora was definitely less interested in such escapades.

One such excursion brought the twins upon a battle between the scientific organization A.I.M. and lackeys of the mutated being Lenz. The twins tried to stop them by taking the object of their dispute, the Gryphon, but soon fled the scene.

Pandora’s cape was stolen during the battle. This caused the existence of the Clan to be revealed, and Lenz sent his agents to systematically kill the Destine family members. Pandora and Rory were soon told of their legacy, and the family eventually stopped the villain.

Walter tried to force the children to stop using their powers as crime fighters. This prompted Rory to run away with Pandora’s help (since they needed to be together to have their powers activated.) The impetuous duo crossed the Atlantic ocean using Rory’s powers and the shell of a small car. They landed illegally in the state of New York. 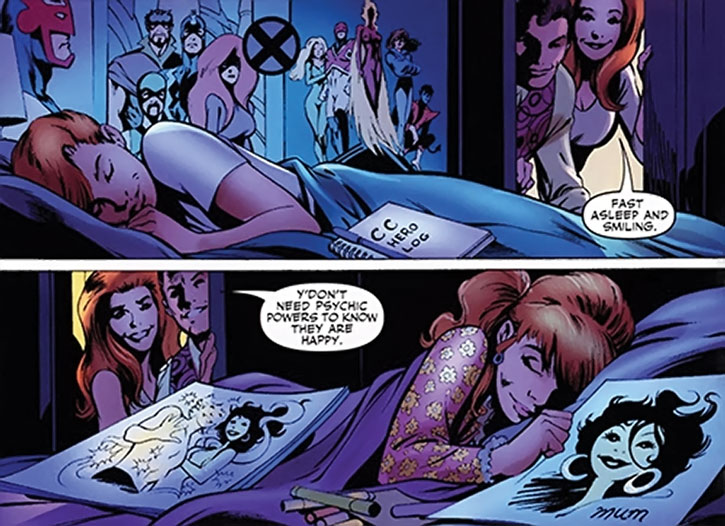 They went there with a specific purpose in mind. The twins planned on impressing the local heroes and joining one of the various “super-teams” that resided in the Empire State.

While they were there, the twins encountered Spider-Man. They helped him to foil an assassination attempt on their Clan sister, Cuckoo. At the conclusion of their adventure in the United States, the twins returned home with their sister.

When they arrived home, their actions had convinced their guardian Walter that attempting to force the headstrong duo to stop using their powers would continue to fail. That combined with their unusual competence and prowess with their abilities forced Walter to reluctantly agree to allow them to continue to fight crime, but only with a chaperone.

Rory was on hand when the demon Synraith pitted the mutant heroes of the X-Men against the ClanDestine in order to free himself. Synraith even tempted Rory and Pandora to join the X-Men. But he was ultimately destroyed. The two teams soon parted under amiable terms.

Both Rory and Pandora are typical looking (if not slightly more attractive than average) tweens with strawberry blonde hair, blue eyes and bright infectious smiles. Rory has developed an unusual amount of lean defined muscle for his age. Meaning that despite his youth, he looks like a fairly typical Alan Davis superhuman male.

When going to school, they wear a non-descript uniform made up of a red sweater that covers a white top. A red tie loops around both of their necks. Rory finishes off the uniform with some black slacks, while Pandora wears a grey-black skirt.

Rory’s Crimson Crusader costume is an all red number, that is reminiscent of Nightwing’s costume. It is a one piece unitard that comes with a cowl that covers most of his face (both his hair and his lower jaw are uncovered by the cowl). 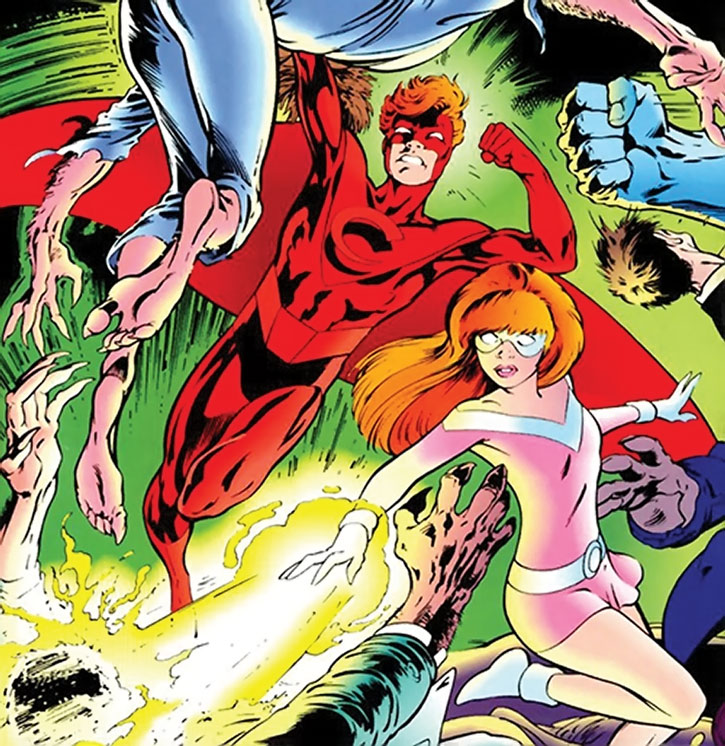 The unitard has a cape attached at Rory’s shoulders and back. The cape completes a triangular design that ends at this navel.

In the centre of his chest lies a large red ’C‘, with a secondary ’C‘ implied as a shadow behind the first. His costume is completed by a large red belt and a sturdy pair of red boots.

Pandora’s Imp costume is far simpler. It is reminiscent of a pink party dress that runs from her shoulders to approximately mid thigh (if she’s standing up). More than once she has complained about the length of the dress.

Other than that, the dress has a white trim across her shoulders and upper chest, a thick white belt that encircles her waist and while boots and gloves to cover her feet and hands. Her costume is completed by a white domino mask that covers her eyes.

Both of the twins are adventurous, imaginative, innocent, ernest and at their core heroic. They hurl themselves into danger with a twitter in their heart and a grin on their faces at every chance they get.

To be honest, Rory is far more eager to be a hero, it’s all he ever thinks about. School, growing up, careers, sports… none of these things interest him in the slightest bit.

He worships superheroes like Captain Britain, Spider-Man and the X-Men. He is consumed with the desire to stand next to them as not only a peer, but a friend. The only thing that Rory seems to love more than being a hero, is his sister Pandora.

Pandora on the other hand, is far less enamored with the heroic life. Make no mistake, she loves the adventures and the discovery of new mysteries. But she has a far more realistic view on life. There is no doubt in her mind of what sort of risks they take and the possible consequences.

The main reason why she continues is because she knows that without her being close, Rory’s powers wouldn’t work and she cannot/will not abandon him.

The twins, being recently introduced to the other members of their family are enjoying the hell out of their new found relatives. In addition, Rory and Pandora have only recently met their father, and have seen their mother a single time in their short lives.

Pandora was deeply moved by the simple fact that after 12 years without a mother, that she has one and that her mother smiled at her.

The clan is such a minor group within the Marvel Universe. They could conceivably be inserted wholesale into the DC universe with very little modifications to their backstory.

Instead of encountering the Inhumans, they could have encountered the Amazons or some far flung group of Legionnaires on a trip to the past. Lenz could have been created by Intergang or Professor Ivo or even been one of Luthor’s experiments.

Crimson Crusader: “Cease and desist your thievery, base varlets, or face the wrath of… The Crimson Crusader… and his faithful assistant, Imp.”
Imp: “Assistant ?!? ASSISTANT ! I do as much as you do, Rory.”
Crimson Crusader: “Don’t use my real name in costume, you’ll blow our secret identities.”
Imp: “You said we were partners, RORY !”
Crimson Crusader: “We are… Honest ! I was on a roll. It was just a slip of the tongue… an error in semantics. Aw c’mon Pandora. This is no time to sulk !” (all the while, bullets reflecting uselessly off of his body)
Imp: “I am not sulking !”

Crimson Crusader: “Hey, They’re asleep. I hope I didn’t bore them.”
Imp: “Rory, don’t you ever get fed up spouting mindless prattle ?”
Crimson Crusader: “It’s not mindless. It’s part of the superhero image. Y‘know, humourous banter to confuse and entertain our foes.”
Imp: “I think you just sound stupid.”

Crimson Crusader: “Our power give us the responsibility to fight evil. But we don’t want Gran and Uncle Wally to know. They’d only worry. So we’d better get home before they discover we sneaked out.”

Imp: “Rory, we have to stop them from fighting.”
Crimson Crusader: “You’re right. This is a job for… The Crimson Crusader… and Imp ! ” (tears open his shirt to reveal his costume underneath)
Imp: “Smart Rory, that’s the only shirt you brought… Don’t think I’m going to sew on the buttons.”

Imp: “Everyone thinks that I want the same as Rory because we’re twins… but I only agreed to crimefight because our powers only work when we’re together.”

(After seeing their mother for the first time)
Imp: “Sniff.”
Crimson Crusader: “It’ll be okay Pandora.”
Imp: “I know … Mum smiled at me.”

We gotta stick together !

If Rory and Pandora are ever separated by a distance of greater than 5 APs both of the twins will have all of their Powers reduced to 0 APs immediately. 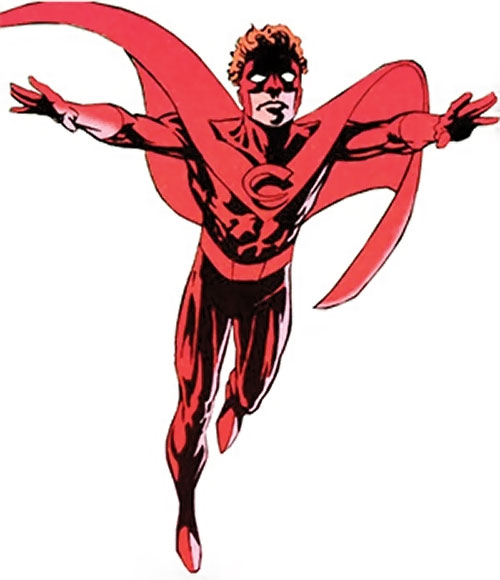 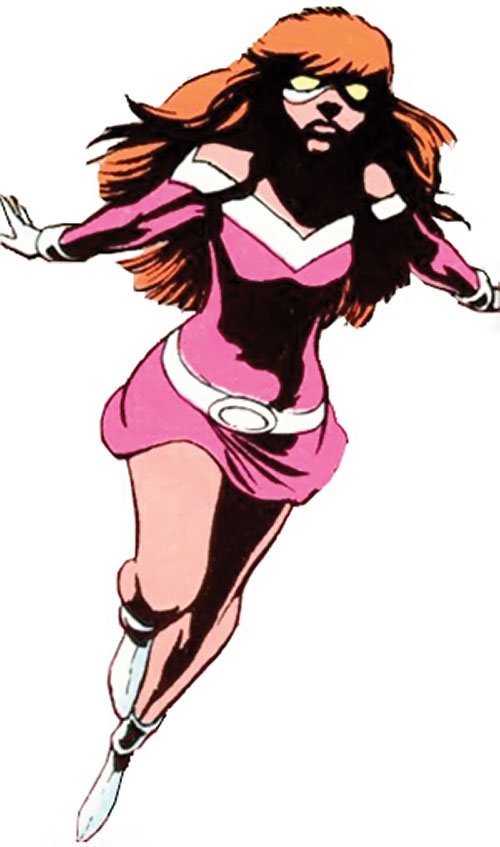 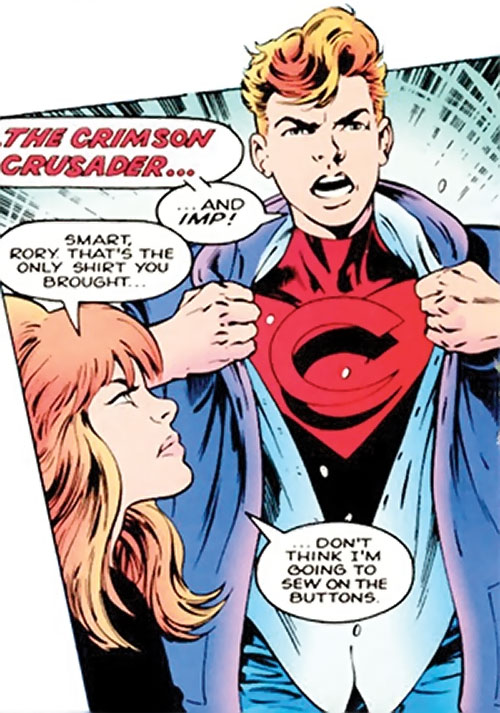 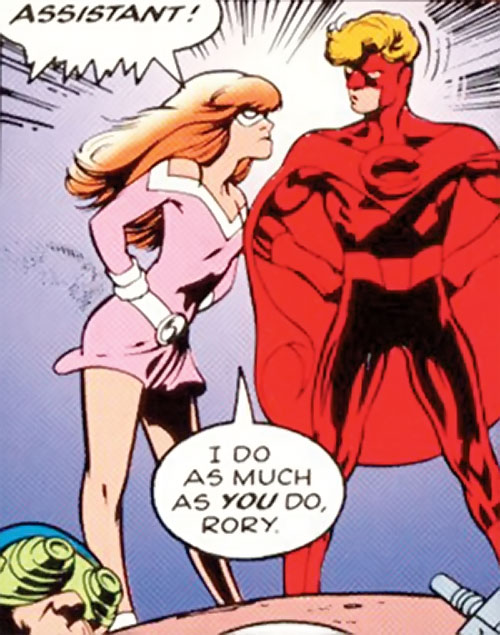 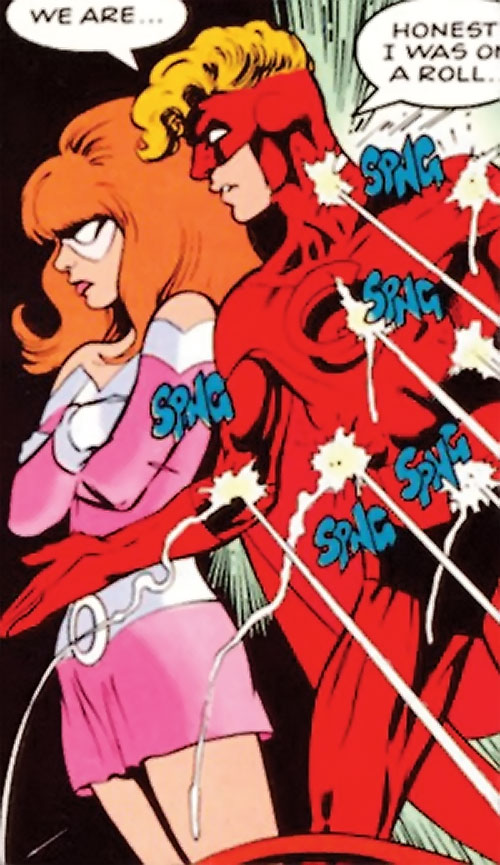 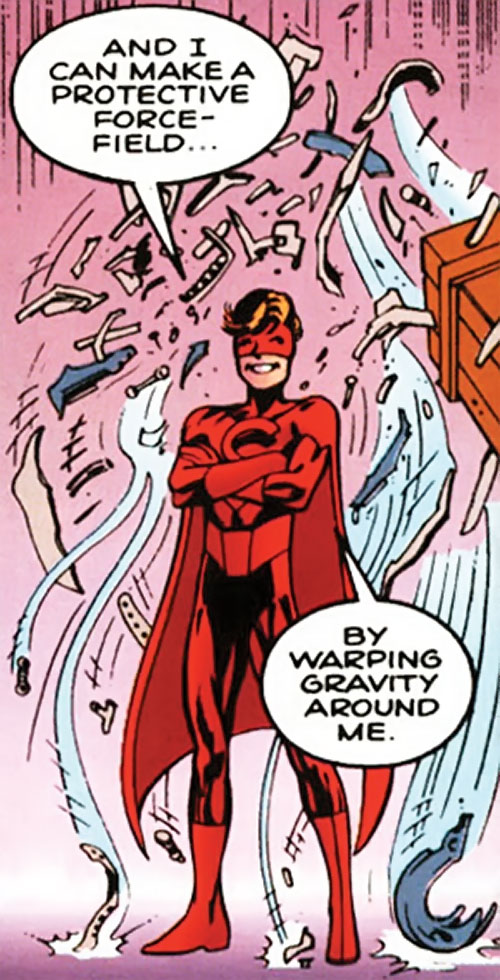 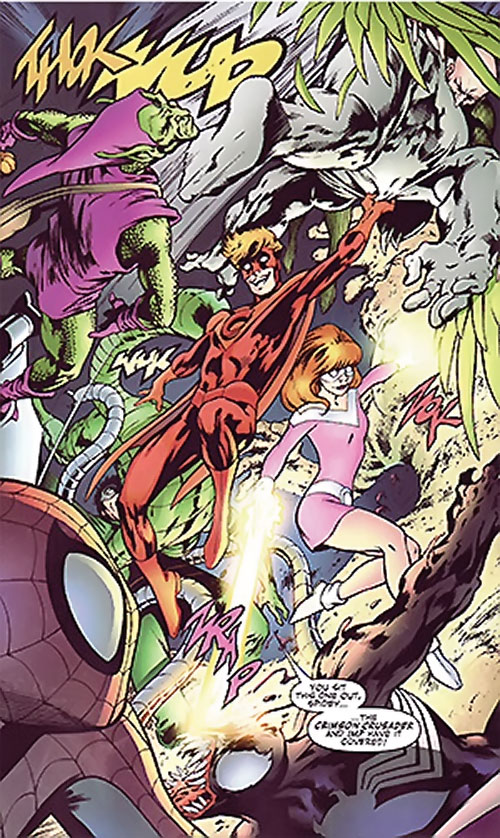