Anto Vanko was one of the major engineering geniuses of the Cold War. He created the first generation of a landmark Soviet suit of power armour at the same time Stark was wearing the “golden” version of the Mk1 Iron Man suit. He was a highly intelligent and dedicated man.

The Crimson Dynamo suit was a marvel of 1960s engineering, with electricity-based powers. Its gauntlets could emit blasts of lightning powerful enough to destroy a main battle tank.

When later worn by Turgenov, the suit demonstrated a high level (for the times) of enhanced strength, which Vanko did not display. It may have been a new functionality Vanko added while living in the US, but I’ve assumed that it was a strength-multiplying equipment that produced modest results for an unathletic person like Vanko but was very powerful when worn by a formidable strongman like Turgenov.

One of the Crimson Dynamo’s most powerful weapons is a modified Vanko generator. It can remotely overload electrical circuits and burn them to a cinder. However this generator needs to be precisely adjusted.  It cannot be used against unknown, hardened technology without preparation.

Targeting space rockets and missiles (that used standard technology and sub-assemblies, which Vanko could study from the trade press), the Dynamo could fry every circuit aboard from miles away, the Vanko generator having pretty much a line of sight range. The generator does not emit any visible beam or other manifestation.

(In the original appearances, it is difficult to tell apart the lightning attacks and the Vanko Generator. It may very well have been intended to be the same thing. In game terms, though, they are definitely two separate abilities.)

During the early 1960s Anton Vankonian, a Soviet Armenian , was one of the key scientists enrolled in the Soviet Cold War effort. Reputed for his intelligence but with his loyalties in doubt, he lived in a precarious equilibrium. Only his amazing discoveries and devices harnessing the power of electricity saved him from losing the Party’s favour – or worse.

During his studies, he shortened his Armenian last name to sound more Russian.

Vanko’s first landmark achievement was his work on low-loss electrical capacitors at the Moscow State University. This got him noticed by the government and transferred into the military to become a designer and engineer of super-weapons.

Moved to a Siberian research station called Arsenal Tomska 44, Vanko continued his astounding work in electrical engineering. He invented designs in remote control, robotics, force fields and the like. His most famous technology was perhaps a compact generator of directed EMPs , called the Vanko Generator.

Eventually, he completed his two best-known masterworks – many of the subsystems of the ’horn’ used by the first Unicorn, and the first generation of the Crimson Dynamo armour.

The ambitious and paranoid Vanko suspected that one of his colleagues was a KGB plant. He was right, but although he thought it was Alex Nevski (a propulsion specialist, who designed the flight systems of subsequent Crimson Dynamo armours and would become the third wearer of the suit), the spy was actually Boris Turgenov.

Turgenov was a strongman, engineer and killer perhaps best known as one of the partners of the redoubtable KGB agent, the Black Widow.

Due to those suspicions, Vanko built a third masterwork in secret. It was the MkII version of the Crimson Dynamo suit. This much more advanced creation laid hidden, its existence unsuspected, for decades until it was discovered by teenager Gennady Gavrilov.

Against the Western Imperialists

After demonstrating the Crimson Dynamo MkI suit to Khrushchev , Vanko was tasked with killing his American rival Tony Stark. Apparently, the Soviet premier was planning to have Vanko executed when he returned. Khrushchev feared the scientist’s genius and ambition as described in Turgenov’s reports.

Packing the Mk1 armour, Vanko was delivered on the East Coast of the US. His first attempt at sabotage was partially foiled in the nick of time by Iron Man, who helped crash-land the manned space rocket the Dynamo had targeted.

Iron Man could not be everywhere at once, however. The Dynamo used his technology to wreck a score of American plants, preferentially targeting armaments-building factories.

But the successful saboteur grew tired of the lack of opposition. He wanted to defeat Iron Man, return as a hero and leverage his glory into political power. Assuming Iron Man might be protecting a key Stark research centre, the Dynamo attacked it more openly than usual. He soon found himself fighting Iron Man (then wearing the golden version of the Mk1 armour).

However Iron Man, using force fields and keeping to the air, was practically impervious to the lightning bolts of the Dynamo. Still, neither could defeat the other. Iron Man did not dare land to engage the Dynamo.

Changing tactics, Iron Man trapped the Dynamo between felled trees, then left to record a message. He then flew back in, grabbing the Dynamo by surprise and flying him above the ocean. Vanko warned Stark that they would both be killed in an electrical explosion if he dropped him.

However Stark played him the recorded message, pretending that it was actually live Soviet radio messages he was intercepting. The discussion was about how Vanko would be executed when he came home. Stark knew “how treacherous all Communists are”. He gambled that Vanko would consider the scenario credible enough to assume he was being betrayed by his superiors.

Stark’s deception worked.  Furious at the “proof” of betrayal, Vanko switched sides and became an ally of Stark. He accepted to start working for Stark Industries. He even gave directions to the FBI for KGB gold caches in the US, to be used to repair the considerable damage he had caused to the US armament factories.

However, Vanko’s defection only benefited the American Cold War effort for a few weeks. The professor had turned his vast knowledge and near-fanatical working hours to research into laser technology. But before he could reach his goals two of the KGB’s finest, Natalia Romanova (aka the Black Widow) and Boris Turgenov came to terminate him.

They easily bypassed Stark security. Turgenov captured Vanko with one of the defector’s old inventions, the Jet Paralyser. Boris exfiltrated the unconscious Vanko to a Soviet submarine, then stole the Crimson Dynamo armour. As the new Crimson Dynamo and with the Widow’s help, he was to take Iron Man down.

Iron Man was also captured by Turgenov and brought to the submarine. However, he escaped with Vanko and flew back to Stark’s headquarter. Turgenov (as the Crimson Dynamo) and Romanova tried to kill him once more. They were faring well until Vanko, using his experimental laser canon, sacrificed his life to save Iron Man. He was slain as he destroyed Turgenov and the suit.

The 2004 Crimson Dynamo LS includes a reference to Vanko being tall and powerfully built. Since this direct retcon  was not necessary in the story I ignored it.

Not an awful lot, really. His appearances took place in the usual Cold War cartoonish propaganda context. At first he was just one of those dastardly, paranoid, treacherous Reds with weird logic. For instance he assumed that killing Iron Man would somehow make him ruler of the Soviet Union.

He then became fanatically loyal toward America. He was ready to die to demonstrate this commitment after Stark lied to him.

The 2004 flashbacks revisit Vanko’s motivations. His career in the USSR had been backed by a politician who fell out of favour, and he was afraid of being part of the collateral damage. More importantly he was of Armenian heritage, and soured on how the USSR treated his fellow Armenians.

Khrushchev: “‘Peculiar’ ? You look ridiculous, Vanko… like a human dynamo !”
Vanko: “Precisely what I am, comrade ! I’m all wired up to perform electric miracles ! You’ll be… uhhh, shocked at my powers !”

“This has been what I’ve been slaving for, comrade leader ! A chance to prove I’m the most powerful man on Earth ! You shall soon have Iron Man’s […] head !”

“I am Professor Vanko, whom our leaders call the Crimson Dynamo ! But sabotage alone will not satisfy me ! I have vowed to destroy Iron Man !”

“Never ! The Americans have been good to me ! I shall never betray them !”

“I can’t do much… but if I can just give Iron Man the few seconds he needs…!”

(Stark about Vanko) “Poor Vanko ! He sacrificed his life to prove his loyalty to our nation ! He shall never be forgotten !”

Drawbacks:
Both in the USSR and the US, Vanko was forever hovering near the edge of Mistrust. 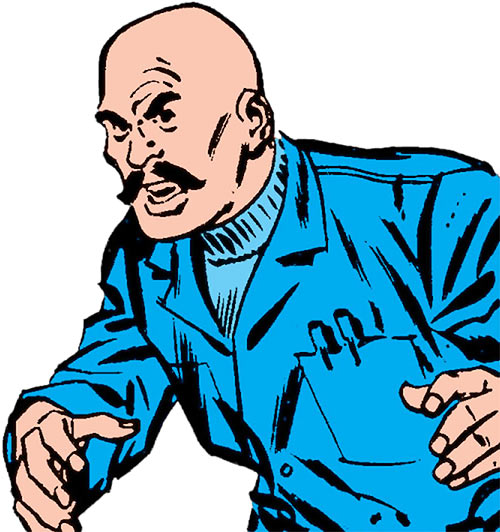 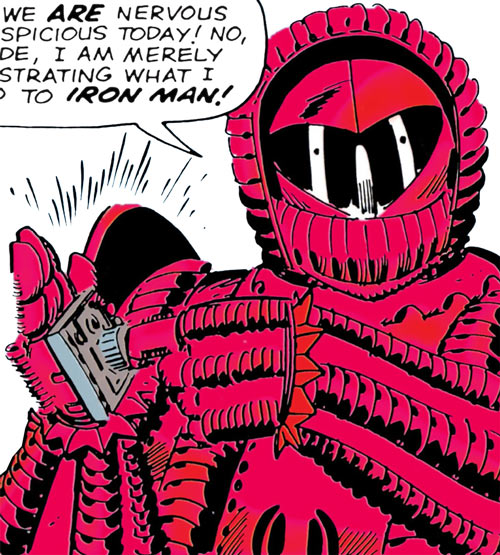 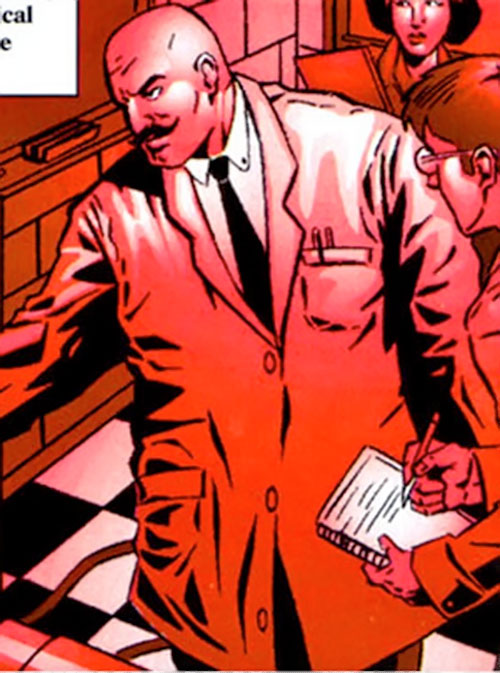 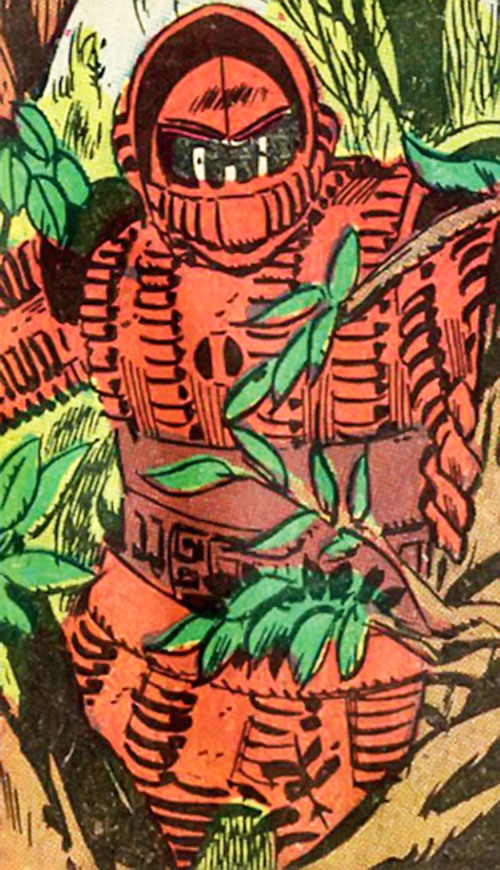