Crippler is a formidable street fighter, marksman and melee weapons specialist. He has received intensive training from the US Marines Corps, the NYPD, HYDRA and Silver Sable International.

He particularly enjoys using flamethrowers and large motorcycles, both of whom he’s highly proficient with.

Crippler has a deranged addiction to both inflicting and experiencing physical pain. More generally, he is somewhat insane. This wild, unstoppable character and his ability to find blows delicious are the basis for his unusually high number of Hero Points .

It is unclear for how long Carl Striklan has been a psychopath. But he always has been drifting, looking for some place to belong to. He was a private in the Marines, but was dishonourably discharged (though he avoided a court martial). From there he joined the NYPD as a patrolman, but was thrown out after he tore off a button man’s arm.

At some point, he spent time in jail. He thought HYDRA was a place he could feel at home. Yet he ended up in an elite disciplinary squad after giving lip to Baron Strucker himself.

In 1991, along with fellow HYDRA manhunters Takimoto and Dakini, Striklan was tasked with hunting down three renegade Hydra genetic creations. They clashed with Daredevil (Matt Murdock) in so doing. His target, Sathan, was eventually destroyed by Strucker. But by this point, Striklan became fed up with Hydra discipline and the constant threats.

Using a switchblade, he gouged out an implanted explosive device from his own neck before it could detonate his head. Striklan then rode away. As he had been assisting Daredevil after his change of heart, the man without fear didn’t chase him.

As the Crippler, sporting a strapping leather boy look and a blond dye job, Striklan became a brutal vigilante in New York City. He even fought the Wild Boys, two feared street criminals with great physical skills. Striklan tortured criminals for a while before letting them walk away, without arrest.

The Crippler was eventually recruited by Silver Sable. He joined her Wild Pack, a group of top operatives who worked directly along with her. Sable’s advisors strongly objected to this on moral grounds, but she wanted his skills on her team.

The Crippler occasionally does some bounty-hunting work on the side – but without any Silver Sable International equipment or uniform. He usually just brings along his bike and a cobraton.

The Crippler is usually smoking cigarettes.

The Crippler is a dangerous nutcase. He’s fascinated by pain, and considers it much like sex – greatly enjoying inflicting it and experiencing it. This makes him fearless and unpredictable. The sole weakness from his fascination is a tendency to toy with opponents rather than taking them out.

The Crippler is really looking for a community he can belong with – and not belong to, as was the case with his previous employments. He hates being under the authority of people he doesn’t respect. He always has a rebellious and flippant attitude. He skirts the edges as a subordinate to Silver Sable, but he enjoys his job and boss too much to risk being fired over his attitude.

The Crippler is intense and cheerful. He gleefully describes how excited recent, current or future violence and suffering makes him. He’s always making sprightly yet sinister jokes and taunting his opponents.

In general, Striklan comes across as a kind of super-tough sexual pervert with a flippant attitude, devoid of any fear, and with an overwhelming penchant for violence.

Crippler is often singing (badly and off-key) Doors songs while he fights. Usually it’s Light my fire or Break on through .

At one point, he had a relationship with Frau Lorna. Lorna is the middle-aged German matron running HR at Silver Sable International.

“No glass jaw, he ? Howzabout the family jewels, farmboy ? Oooh ! The rooster becomes a capon !”

“I just don’t get it… you guys tryin’ to kill me or just get me excited ?”

Silver Sable : “Additionally, the new uniforms have a Kevlar lining throughout the torso, are flame retardant and heat resistant. Any questions ?”
Crippler : “Yeah. How come some people dress up poodles like people ?”

Crippler : “He he. I’m gettin’ all tingly thinkin’ about beatin’ the crud out of them. I hope we’re outnumbered. Oh, I’m definitely gonna need a cigarette after that.
Chen : “You need a muzzle.”
Crippler : “Could be fun.”

See Silver Sable writeup. Or keep him as a one-time ally of Gangbuster. 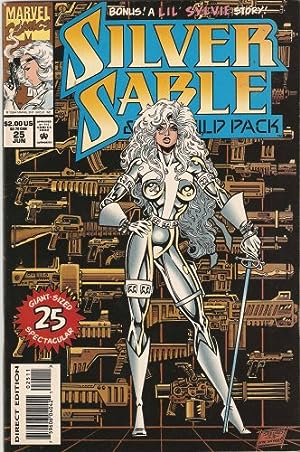 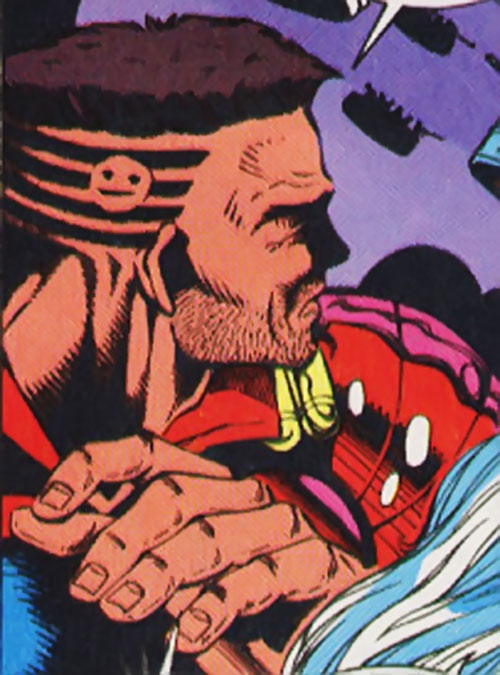 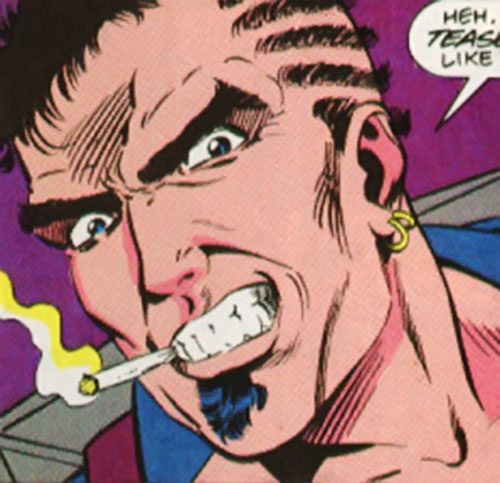