Crocodile Dundee is a wilderness survival veteran. As such he is an expert at camping, roping, knots, traps, skinning, firemaking, pathfinding, tracking, field cooking, stealth, finding edible plants, track recognition and handling his big knife (including throwing it or rocks).

Other than riding, he is also an adept driver and boatsman. Raised by aborigines, he seems to be able to communicate with animals on an instinctual level and knows how to calm down even great predators (using his famous stare-down technique).

Mick was born in a cave one summer many years ago. He was apparently raised by an Aboriginal tribe and had never visited a city. Over the years, Mick became a rather famous survivalist and big game hunter specializing in crocodiles, as well as a tour guide.

One day Mick was visited by a reporter, Sue Charlton. She was investigating a report she heard of a crocodile hunter who had his leg bitten off by a crocodile. However, by the time she met him, the story had scaled down somewhat, to just being some bad scratches on his leg (a “love bite” as Mick called it).

They traveled together out to where the incident occurred, and followed his route to the nearest hospital. Despite his macho approach, and seemingly sexist opinions, the pair became close, especially after Mick saved Sue from a crocodile attack.

Sue invited Mick back to New York City with her, as his first trip to a city (or “first trip anywhere,” as Dundee said). In New York Dundee was a “fish out of water,” and despite his expert approach to the bush, he knew little of city life. Mick met Sue’s fiancé Richard, and they did not get along.

Eventually, when Mick was on his way back home, Sue realized that she loved Mick, not Richard. She ran to the subway station to stop Mick from leaving and, by passing on messages through the crowd, she told him that she won’t marry Richard, and that she loved him instead.

With the help of the other people in the subway, Mick and Sue had a happy reunion.

Later on, Mick and Sue were living together in a New York apartment. Sue’s ex-husband was in Colombia following a gang of drug dealers and he posted some evidence to Sue, as she was the only person he could trust. 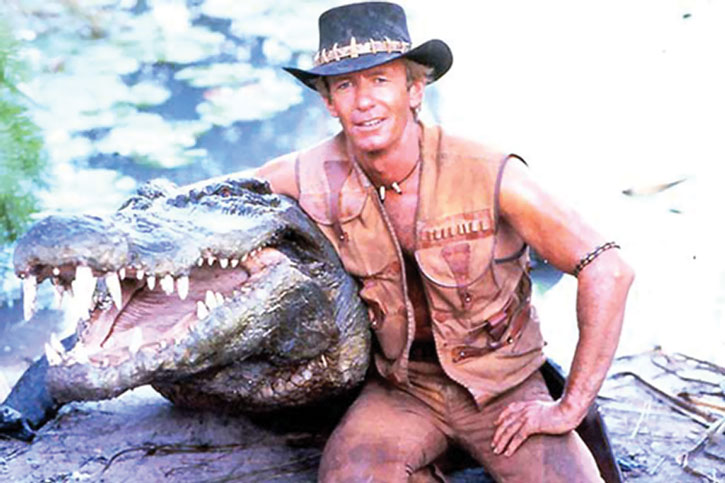 He was discovered and killed by the dealers and they realized that he had sent the evidence on, and so they kidnapped Sue to get it back.

Mick got the letter that morning and hadn’t realized what was going on until Sue phoned from the kidnappers’ house. Mick, by getting help from a local gang, broke in and snuck Sue out. Mick and Sue then headed to Australia for protection.

The Colombians followed suite and attempted to track Mick and Sue, but Mick was now always one step ahead, ending with the arrest of all the criminals.

Around 13 years later, Mick was living with Sue and their 9-year-old son, Mikey. Now that it was illegal to kill Saltwater Crocodiles in Australia, Mick was forced to relocate and wrestle crocodiles.

Sue replaced a worker at her father’s newspaper who had died mysteriously, so Mick and Mikey travel with Sue to Los Angeles while she filled the position until a full replacement was found.

Together they traveled around Los Angeles and the usual fish-out-of-water jokes occurred. Mick investigated and discovered the film crew from a film that the reporter that had died was reporting about. He found out the truth, namely that they had been smuggling very valuable paintings that had supposedly been destroyed years before in a war.

The guilty members of the crew were eventually arrested, and Mick and Sue then finally got married back in Australia.

Crocodile Dundee is a sinewy male always wearing his trademark black hat with teeth, a vest of crocodile skin, a tooth necklace, brown trousers, boots and sometimes a pair of shades. For weaponry he regularly uses his really big knife or a gun.

Naturally he speaks with a heavy Aussie accent.

Crocodile Dundee thoroughly enjoys wilderness survival and hunting. His methods are often unusual, but they work. For example, he fishes using dynamite (or a spear). Most of his time seems to be spent out in the wilderness, and that is frankly where he belongs.

Crodocile Dundee is actually a very likeable character. Wherever he goes he usually ends up befriending the local police authorities since they soon and regularly have to check up on his various antics. He is something of a prankster among people, although his pranks are often misunderstood.

Mick does, in fact, know animals much better than people.

His manners, philosophy and way with most people is rather eccentric, which, since he is in no way arrogant or aloof (more of a boyish charm, in fact), often results in him getting a small following. He is extremely ignorant and naive as to the big city ways. He is a believer in traditional gender roles.

People on the street and in bars usually think that he is very cool. Naturally he smokes and drinks a lot periodically.

He is no push-over by any means, however, won’t have any disrespect at all and will usually respond with a swift knockout punch or head butt. No man or animal seems capable of really scaring him and he will practically always do the right thing according to the old school.

Although he does love his wife Sue he had trouble showing or telling her that, which resulted in them getting married so late. He much enjoys spending time with his son, and teaches him all the ways of the wild, which doesn’t exactly mix well with big city life.

He sometimes longs for his old pub buddies in Walkabout Creek, such as his good buddy Jacko, but then usually gets new ones in the big city instead (for example Leroy Brown).

Of course, he regularly seems to visit Australia. During such stays he seems to work a little for fun for Never-Never Safaris, and visits the Aboriginal tribe where he was raised.

When in Australia he goes to rest and relax at Mick’s place (or “Billongamick”), a huge land tract he owns that takes three or four days to walk through. It was left to him by an uncle of his.

Dundee considers the land itself to be useless, but its redeeming feature is that it has a goldmine in it, what he calls his “retirement fund” (could perhaps be of use in-game as the Rich Friend Advantage; even if Sue is relatively rich he probably wouldn’t take her money).

Or then he just goes for a couple of brewskies to the local pub wherever that is. After that it’s time for the wilderness again.

[Mugger flicks open a switchblade and Dundee looks at it and snickers] “That’s not a knife.” [Dundee pulls out his very large knife] “Now THAT’s a knife.” [Dundee slashes the teen mugger’s jacket and maintains eyeball to eyeball stare and the panicked muggers run away][turns to Sue] “Just some kids having fun. You all right ?”

“I don’t mean to put down your black widow spider, but the funnelweb spider can kill a man in eight seconds, just by lookin’ at him.”

“How do you like your goanna ? Medium, well done ? Yeah, it’s great. Try some of these jams. Try the other grubs, and the sugar ants. Just bite the end of them, lots of fellas really like them.” [later after Sue ate] “Me ? Ah, well, you can live on it, but it tastes like shit.”

“That’s incredible. Imagine seven million people all wanting to live together. Yeah, New York must be the friendliest place on earth.”

In the DC Universe, Crocodile Dundee would likely also visit Africa. He would probably have had run-ins with Congorilla/Congo Bill, the B‘Wana Beast and would even have visited Gorilla City. As an exotic hunter, he’d also have met various serpent-inspired villains, Killer Croc (!), and other animal-inspired villains.

Considering that Mick is not superpowered (unless he is somehow boosted), these meetings would likely have been team-ups with some heroes, such as Animal Man and Vixen. Afterwards, Mick might have become something of a consultant for heroes about animals.

Although all of this lends imagery from cartoonish stories, Crocodile Dundee is probably best presented in somewhat grimmer, darker and more realistic storylines, while keeping the character himself cool and relaxed.

He would, no doubt, also be a drinking buddy of the Tazmanian Devil where they compare their experiences in the silly Western world. Killer Croc would have likely been a recurring villain, which mostly would have occured during the era of the JLI days.

Crocodile Dundee is an excellent example of a character with relatively low Attributes but high Skills. 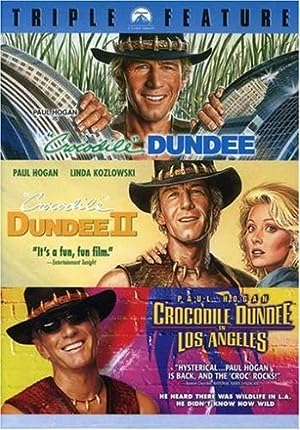 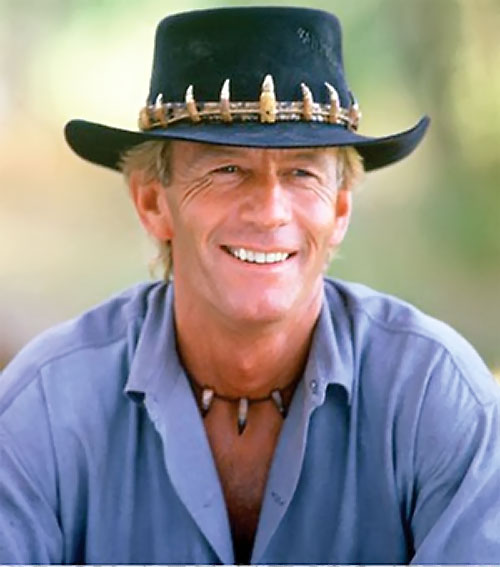 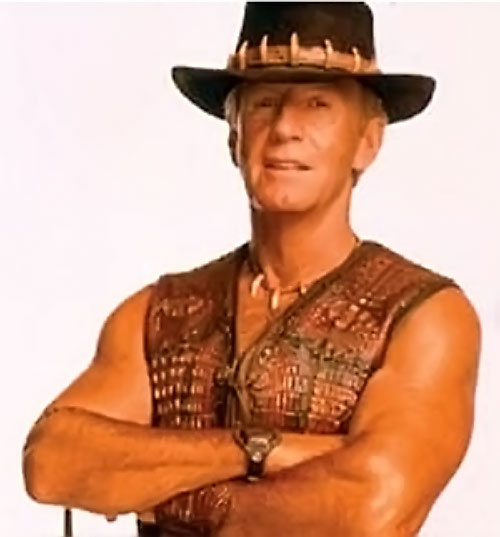