Tandy was originally a street tough and a good brawler, usually armed with a crowbar.

Crowbar was briefly seen wrestling with Aquaman, so he likely was physically enhanced.

He also seems to have a certain charisma.

A crow walks into a bar…

Now he’s a supervillain, and can charge a metallic object (normally a crowbar) so it strikes with incredible force.

This power has limits. First, his crowbars will bend and degrade as they are charged up then discharge on impact. And while they hit with great force there are far greater forces out there. For instance Bork could just block a full blow with his open hand, even bending the bar slightly under the impact.

Aside from meleeing, Crowbar has been known to :

Note that, when used as a projectile, the crowbar only releases its energy on a solid impact. Catching it or deflecting it is safe, for those few with the necessary speed and precision.

When fighting the Power Company, Tandy had his crowbar fly back to him – Thor-style. That was new.

The crowbars he uses seem to be normal tools bought at the hardware store. Howbeit, Tandy has a certain cunning, and lets everyone think his crowbar is his power source. He may even do a bit of acting to reinforce the impression that he’d be powerless if disarmed.

Malcolm Tandy was originally an OG  in Detroit multiracial street gang the Skulls. This set was known for its rivalry with el Lobos, a Latino set with whom Paco Ramone, aka Vibe, once ran.

The Skulls members were usually known by their signature melee weapon (“Slice”, “Icepick”, etc.) and Tandy’s street name was thus “Crowbar”. He hated being called Malcolm.

When the JLA established itself in Detroit, they intervened twice against the Skulls to derail an attack against the Lobos. The hapless street fighters were easily defeated. Crowbar was once taken out of the fight by Zatanna and the other by the Martian Manhunter and Gypsy. As a result of the latter confrontation, Tandy was thrown into jail. 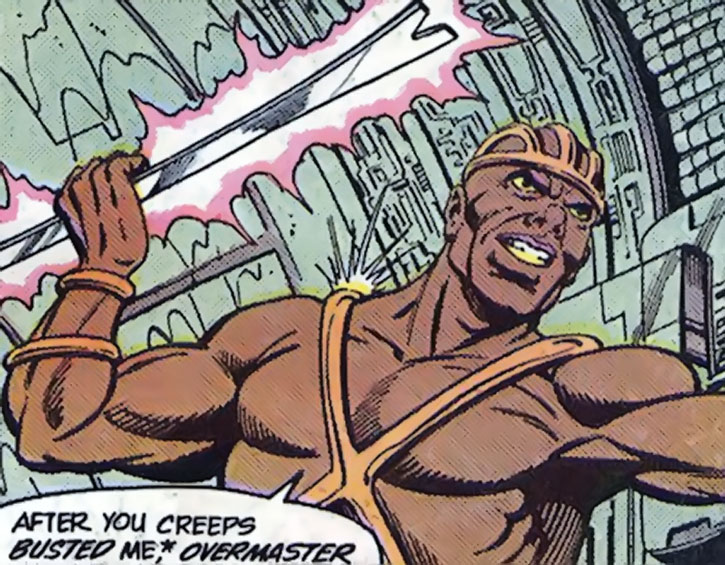 He was teleported out by the alien Overmaster, who recruited him for his Cadre. Thus, when Tandy clashed again with the JLA it was on more equal terms. He now had super-powers.

Crowbar often hung out in super-villain bars. During one such afternoon at the club, he and other near-forgotten villains (including fellow Cadre member Black Mass) played their special weapons at poker. He lost to Wally Tortolino, a reporter.

Tortolino went crazy with excitement and launched a rampage with all of his weapons. But the losers of the bet, including Crowbar, caught up with him and claimed their stuff back. Crowbar was then defeated by Lightray, who had shown up in response to Tortolino’s rampage.

Years later, Doctor Polaris assembled most of the Overmaster’s first Cadre, including Fastball and Nightfall. Additional operatives were a new Shrike called Starshrike, the new Shatterfist and a mostly brain-dead Black Mass. Crowbar appeared to be the field leader of this crew.

Polaris’s Cadre stole resources in high technology companies around California. However, they were hounded by Skyrocket and some other members of the Power Company. Eventually, Polaris had the components to assemble his master weapon. It was a satellite which could transmit a magnetic pulse over the entire planet.

However the Cadre, led by the greedy Crowbar but minus the brain-dead Black Mass, turned against him. The henchmen did not want to end civilization, but rule it.

Crowbar broke several of Dr. Polaris’ ribs with a surprise attack. But the master of magnetism was too powerful for the Cadre, as he was tapping the power of an alien Controller. Crowbar himself quickly lost the upper hand as Polaris magnetically controlled his weapon. The Cadre were defeated and jailed.

As the crowbar flies

Years later, when the government started hunting down superhuman criminals to illegally deport them to an alien planet, the Cadre found themselves in hot water. About half of them allied with a motley crew of villains for mutual protection. The other half apparently nearly got caught by government operatives.

Crowbar, Black Mass and Nightfall made a dash for it and hijacked a small jet. They commanded the pilot to take them someplace far from America. They were intercepted in the nick of time by Black Lightning, who subdued them.

They apparently were not deported off Earth, perhaps because of JLA intervention.

Crowbar seemed to have bulked up after he was enhanced, though it’s not quite clear.

Crowbar is a big and loud-mouthed street tough. He likes to brag and to have cred. He also nurses his grudges, and seems to like beating people up and wrecking stuff. He’s proud of his physique, which might help explain his very… frank costume.

Tandy becomes less confident when deprived of his signature weapon. But even if he’s disarmed he will join his teammates in the fight after a few Phases of hesitation. This is especially true if he’s got a score to settle with somebody whom he can hurt with his bare hands.

Still, he’s wary of being disarmed. He will cling to his weapon even if that means being thrown around a bit.

Crowbar is a professional minor villain who’s out to get money. This life is quite similar to the one he had as a gang member, only better. He has above-average determination, cunning and ambition, but he’s not really smart and is a poor planner. It’s not uncommon for him to make stupid mistakes that wreck the execution of what was a workable idea.

“Don’t ya remember, punk ? Name’s Crowbar ! After you creeps busted me, Overmaster grabbed me outta jail — offered me a deal ! He gave me power, and made me one ’a his Cadre, just like these other guys. And you know what he wants in return ? It’s a laugh. All I gotta do is kill you !”

“You heard the boss, Cadre… ‘reason’ with ’em !” (the Cadre charges the Power Company)

“Listen up, doc. We helped you out, but not ’cause we wanna see civilization destroyed. We like civilization — banks, hotels, luxury yachts, Big Macs, money — all of it. So here’s how it’s gonna be : you work for us. You’re just gonna put your [mind] control whammy on all the presidents and premiers an’ such — so we can rule the world, an’ live in style !”

* Without Defensive Roll
** When not wielding a crowbar 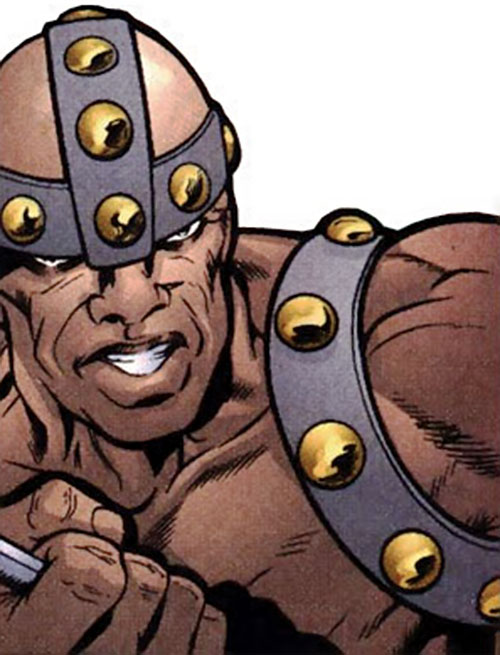 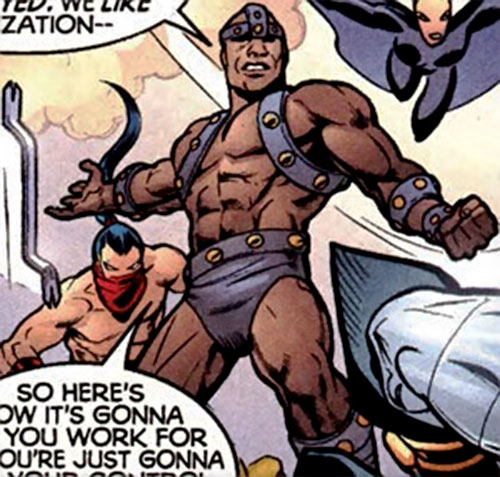 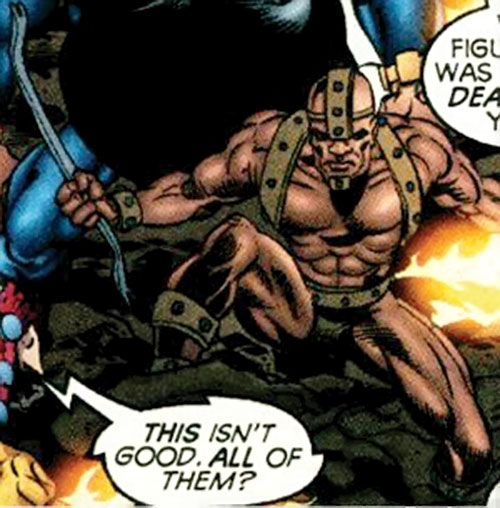 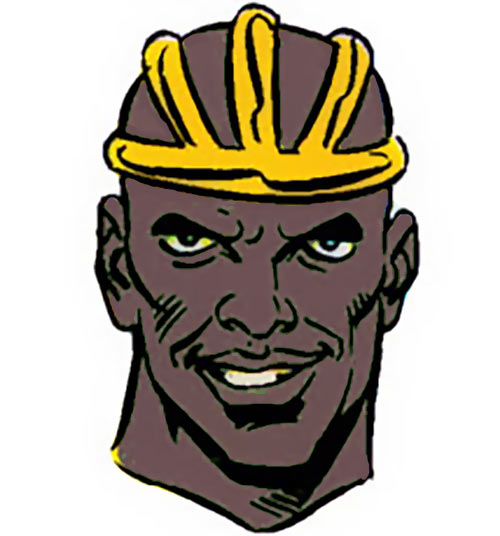