Cruiser is a powerful telekinetic. He can:

Using these powers, however, is taxing on him and drains him physically. His physiology allows him to consume vast amounts of food which he can store up to fuel his powers, and this means that his body shape can vary greatly over a short period, going from rotund to skeletal as he uses his powers.

Cruiser is also unnaturally sensitive to being targeted by firearms. He’s able to sense that he is in a sniper’s crosshairs from a mile away.

He is also a capable strategist and an accomplished sharpshooter.

Cruiser was born a member of the royal family on his home world. During his childhood, the Rapture gained more sway over the populace, gathering more into it’s hive mind. Eventually Cruiser was forced to flee the royal palace, the Rapture’s dominance almost complete.

He was contacted by Network. But he refused to join her, being determined to free his parents and fiancée. Hellicon infiltrated the palace, and found them locked in the dungeon. When he tried to free them, however, he found that they had already been taken over by the Rapture. The other Sovereigns appeared and helped him escape, and he reluctantly joined them.

Fleeing the Rapture, they arrived on Earth. They were near the Crossroads Coffee Bar, situated in a town named after it. The bar is run by the sisters Pansy Smith and Violet Jones, and is larger on the inside than it appears from outside, with some doors within the building sometimes opening into other places, even other dimensions.

The Sovereign came into conflict with the Female Furies of Apokolips, causing damage to the bar as they fought. Afterwards they helped repair the damage and took jobs there.

Their first encounter with the strange properties of the bar came when Cascade disappeared, through one of the doors. When they found her, the other Sovereigns discovered she had been brainwashed and transformed into Nike by an unidentified opponent. As a result, she had joined Zelus, Bia and Kratos.

They used her to try to open an enormous set of doors. The Sovereigns managed to free her from their control just as she opened the doors. These led to Cascade’s home world, and opening them woudl let her mother, Maîtresse, free. They managed to free Cascade and close the portal before this could happen.

Living in a bar

They settled into their new home, protecting it from extraordinary threats. These included Dystopia, Deadline, and the super-powered serial killer Skin Dance. The latter was an old enemy of Crossroads’ sheriff, Molly Savoy, who had befriended the Sovereigns.

The Sovereigns went searching for a couple of teenagers (Casey Rassendyll and Daisy Miller). The pair had gotten lost in the Bar when the Sovereigns had a battle there. The heroes travelled to their homeworlds. There they first came into conflict with Triage, a creation of Maîtresse. He had been sent to retrieve Cascade and fight the Rapture.

Sovereign Seven rescued Casey and Daisy. But Triage and his servants eventually followed them to Earth where they clashed again.

Network received a psychic distress call. It came from a captive telepath, a slave of a company called allied with the Shogun crime cartel. Network allowed herself to be captured by Chimera, an android serving Shogun, although she was actually in control. She kidnapped Cascade and Conal Savoy, Network’s boyfriend, as presents for Dana Efemilia Hanro, the head of Shogun.

The other Sovereigns, and Conal’s mother sheriff Molly Savoy, tracked them to the island of Meridian. Meanwhile, Network was carrying out her plan to free an infant telepath held captive by Shogun.

Following their safe return, Cascade, feeling Network’s betrayal the keenest, left the team. She tried to start her own life in Manhattan, but returned to the team after a while.

They again came into conflict with Zelus, Bia and Kratos who had gained a new Nike, the transformed Power Girl. Nevertheless, the Sovereign Seven managed to defeat them and free her from the enchantment.

Soon afterwards they were asked for help when power-seekers released the Gatekeepers of the Abyss. While fighting them, Rampart was killed. Power Girl took his place on the team.

They became involved a civil war in the country of Kuristan, a neighbour of Russia. It ended when the Rapture arrived on Earth. Despite having their powers suppressed, they managed to repel the invasion.

Blunt and belligerent, Cruiser is constantly alert, always expecting an attack. He is also loyal to his friends.

He likes to keep himself well fed, being fearful that he will run out of energy when he needs it.

While he accepts Cascade’s leadership, although not without question, Cruiser sees himself as second-in-command of the team. He also believes himself a superior strategist to her.

He still feels love for his fiancée Alyxandra Cobourg, and hopes to free her mind.

“Losing possessions, that’s just stuff ! Losing titles and the crown, even that didn’t matter so much. But watching the way people changed – friends, family, even my parents – when they were claimed by the Rapture, that’s what’s so hard to bear.”

“Hi, there ! I’m called Cruiser ! I’m a telekinetic powerkaster ! And I have a real problem with folks who point guns my way.”

Drawbacks:
Arch Enemy (Snapshot/Alyxandra Cobourg), Exile (Voluntary), MIA to solving puzzles, MIA to eating as much food as possible in order to stock up for using his powers.

The Care and Feeding of Cruiser’s Telekinetic Powers

Using his powers causes a physical drain on Cruisers body mass. It can leave him visibly reduced in size. A large enough expenditure of power could conceivably kill him.

Every Phase he uses he uses one of his Telekinetic powers he must make an Action Check with the APs of the Power used for the action as the AV/EV. These may be different than the APs he has of the power, if he’s using it at a lower level, or has increased it through pushing or HP expenditure. The OV/RV are his APs of Power. Any RAPs from this are taken as Killing Damage.

This damage is first taken from his Damage Capacity, then taken evenly from his STR and BODY. This works until his Strength reaches 0, at which point RAPs are taken solely from his BODY.

Eating allows him to recover from this damage quickly. As long as he is eating a substantial amount his regeneration allows him to heal damage to his BODY, STR and Damage Capacity. He always tries to fill up before a battle so that his Damage Capacity is at full power. 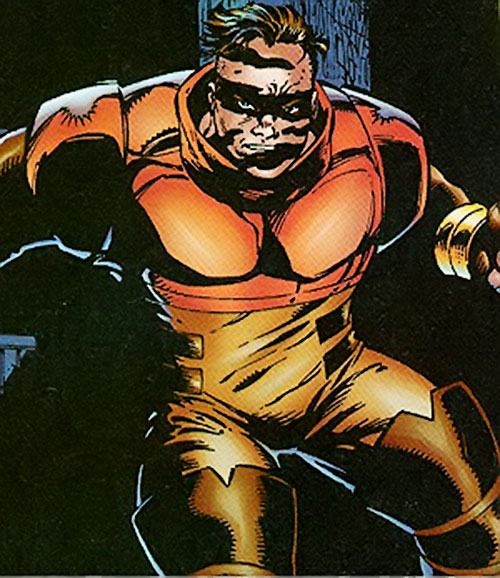 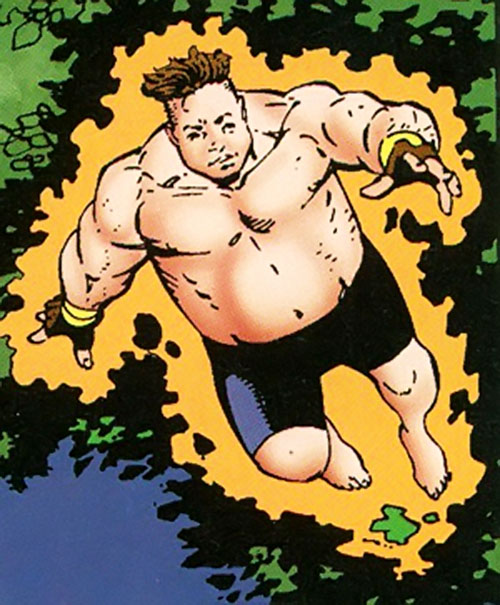 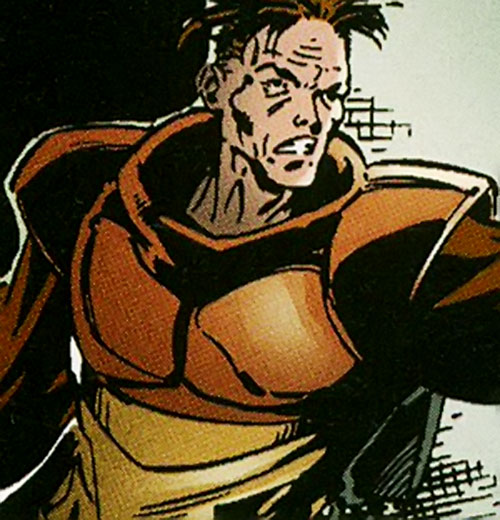 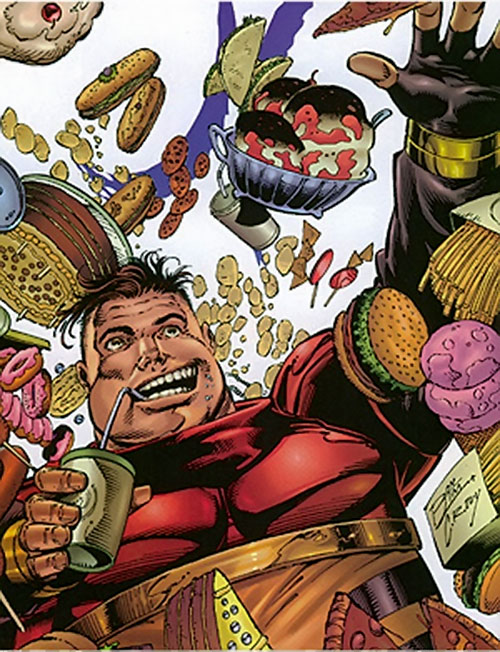 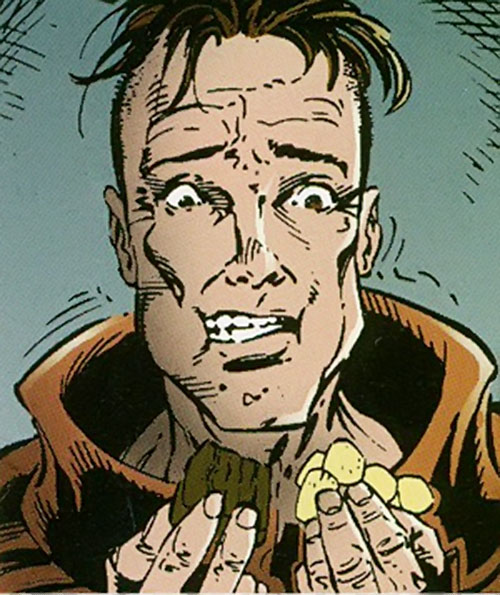 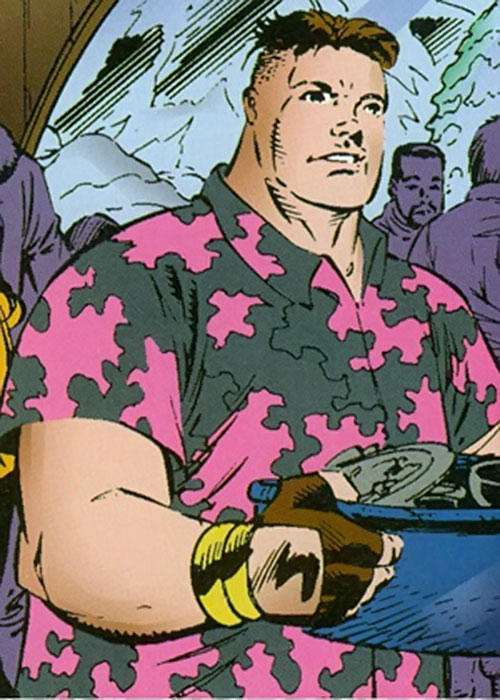