This minor Image/Wildstorm comics character first appeared in 1993. He was mostly seen in Union and WildCATs stories.

We have these old, partial notes about him since a/ we were wondering how much BODY he needs and b/ he has a sourcebook entry. But while it can be useful, this profile needs to be redone.

Crusade has basic but powerful abilities. He can fly around the whole Earth within an hour, or trade blows with Mister Majestic (who has Kryptonian-class  strength and durability).

The whole WildC.A.T.s team of that period, including Majestic, couldn’t physically harm Crusade.

Crusade is the last member of a band of intergalactic knights. His exact origins are unrevealed, but Void was certain that he was an altered human.

After a thousand of years in exile, Crusade returned to Earth to avenge the death of his fallen comrades, and teamed up with Union in so doing.

Crusade resigned himself to a life a joyless existence on Earth. But then he discovered the presence of Kherubims (to him quite the devil-spawns) among the WildCATs. Crusade attacked them with great enthusiasm and exaltation. Warblade couldn’t even nick him, Maul’s blows weren’t having an effect and he proved able to clobber Mister Majestic himself.

After a long, drawn out brawl, a semi-depressed Savant used Tao-like logic traps to trap Crusade into the inconsistencies of his credo. Faced with large holes in what he believed, Crusade went nearly catatonic. Savant then quit the CATs.

Crusade is you basic holier-than-thou, battle-enjoying paladin with apparently unshakable belief in his values (such as the evilness of the Kherubim).

He relishes at the thought of a fight against his enemies, but is careful to protect innocents.

He’s quite cheerful and positive when he gets to kick ass, and probably always speak in a grandiloquent, faux-medieval way.

“Even a small child knows of the foul nature of the Kherubim.”

Obviously he would be certain than Daxamites are evil incarnate, and presumably mistake Kryptonians for Daxamites.

Drawbacks:
CIH of the Kherubim and anyone allying with them. 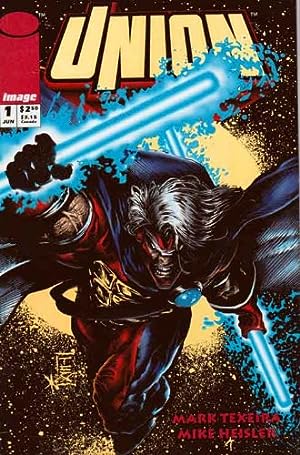