There wasn’t much background information on him. Therefore, I’ve both smooshed and expanded, speculated and extrapolated what was there. In other words, I had to make a bunch of stuff up.

He’s fairly generic and would make a nice hand-out character for a new or temporary stand-in player.

Crusader is your basic martial artist with an extra gadget or two.

His boot jets have enough thrust to rapidly launch him airborne, where he his glider wings then take over. His buckler is capable of deflecting small blasts, along with most forms of gunfire.

Sam Saunders’ real name has been lost to iniquity. A budding, small time reporter, he stumbled upon what seemed to be a shady deal between some government agents and an informant. Caught doing so, the agents had no recourse but to capture him. They couldn’t allow news of the meeting to spread.

Brainwashed, he was then trained and used by the CIA to infiltrate villainous organization VIPER. The involuntary agent had orders to sanction a suspected high ranking official. Then he would kill himself in order to close up loose ties. Deep under cover, crime after crime, he grew ever and ever closer to his programmed goal.

However, this duplicity was uncovered. A robotic decoy was destroyed in place of the official. His mission unsuccessful, the second portion of his orders was never initiated. VIPER, instead of immediately eliminating this traitorous agent, reversed the brainwashing.

They then sent him after his former “employer”, again to kill himself in the process. Two birds with one stone, poetic justice, so to speak. To further foment public outcry, he was given a patriotic costume and gimmick. If all went well, news would then spread that the U.S. government was at odds with and responsible for killing a national hero.

This “hero” had been trained well, and was successful. However, his former contact was but another faceless agent, not an important CIA figure. This garnered little news attention, and likely could be covered up. However, the intense, psychological strain of this murder broke the conditioning before he could take his own life.

He remembered all that he had been through, and where it had started. He indeed had a breaking story, but at what cost? He had enough information to make him dangerous to either side and neither ever expected, nor wanted him to live. Would he admit to murder? Would he even be believed? WHO could he trust? Whose ends would he serve?

He decided he would start over. He would “take back” this new identity, a bright, inspirational hero, and never be responsible for taking another life. He would take up the never-ending battle to stop this nation’s murderous scourge, and thus was Crusader truly born.

Crusader wears a red, white, and blue costume of slightly odd design. Flared gloves, Batman-style boots, a Wolverine-style mask, trunks, and membrane-like glider wings from hip to wrist make up the ensemble. There is a secondary flared style pattern around the eyes of the mask (which rises up above the bridge of his nose), and an oddly shaped, angled star-like design across his chest.

His arms, chest, and legs are blue, the gloves, trunks, top of head, and boots are red, with the eye design, belt buckle, glider wings and chest insignia being white. His buckler shield sports the same color and insignia as his chest design. His belt is basic black.

Crusader is a simple, two-fisted, man of action. He borrows bits and styles of numerous well known heroes. He is the bright shiny hero with a shady, violent history. His girlfriend, Sally, does not know of his past. He loves his country, yet is distrustful of his government (due to what was done to him), and is perhaps a bit paranoid.

He does, however, know that there are worse things out there. He works as a part-time security guard in his new identity of “Sam Saunders”. He is wary of full time employment, since the CIA might find him. Sam despises murderers and will intently go out of his way to make that known.

Crusader could have appeared in a brief Power Company comic book series when the licensing rights to Manhunter were tied up elsewhere (à la “Protector” in New Teen Titans). 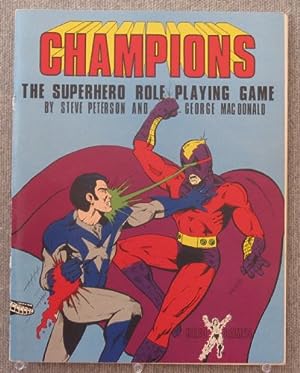 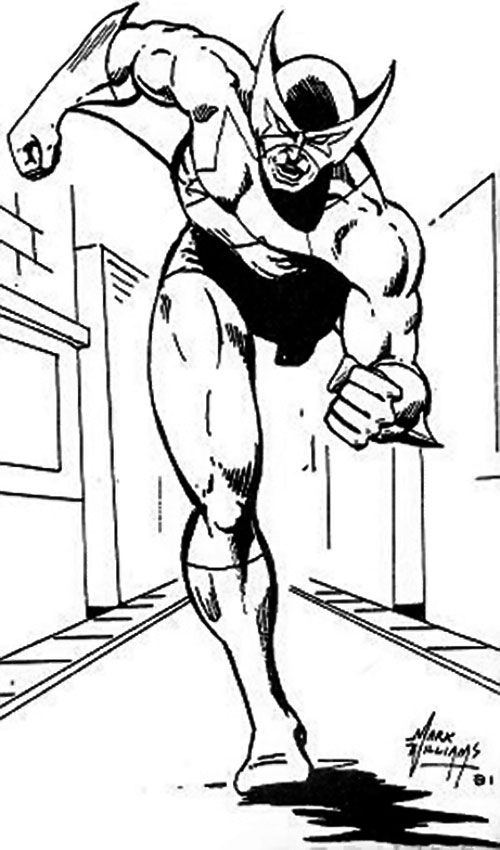