Crush is a member of the Freelancers mercenaries.

Crush seems to be a geokinetic. She can mentally move rock, soil and trees with great force. Examples :

However, it seems that she has to focus, gesture and visualise whilst using her telekinesis. This leaves her a sitting duck. 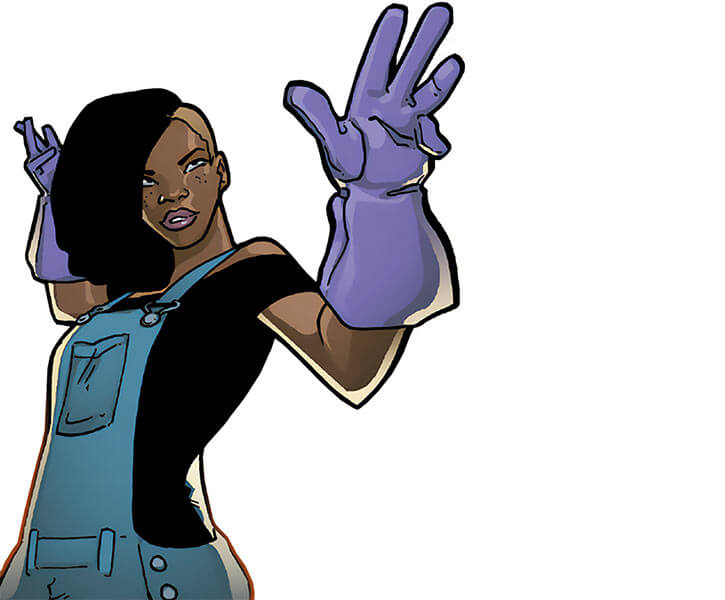 Crush also demonstrated superior people skills. She could manipulate and convince people with confidence, but little subtlety. She comes across as cool and personable, and makes a lot of compliments.

It feels like a minor super-power, perhaps having to do with pheromones. But the dialogue is ambiguous about whether it’s a power or a skill.

(“Crush” is presumably a small pun alluding to her ability to both crush her enemies under rocks, and to have them quickly develop a crush on her.)

As an example of manipulation, during the Freelancers’ first encounter with the Champions, Crush :

Of course, Cass then detonated a bomb next to the Champions, giving the Freelancers a head start in the battle. 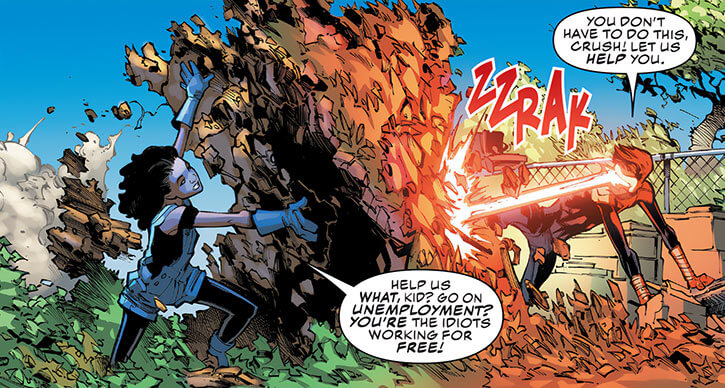 That Crush wears ordinary if cute-ish clothing is part of her tactics. It denies information about whether she’s a superhuman, or what her powers are.

She could easily be just some random civilian, and that often plays in her favour.

Her height is incoherent from panel to panel. I’ve decided that the earliest art was correct.

A cruel user and egomaniac.

She takes pride in demonstrating her powers and skills, without care for the context or the consequences. It’s her #personalbrand.

Crush is once oddly scared of a (admittedly large and raggedy) rat. That she wears robust-looking gloves is also odd, given her clothes. Our game stats *assume* that the two stem from a mild phobia of germs/contamination, but it’s *not* stated in the material.

“I have something to tell you. I know what you’re really like inside. In your soul. So deep and gentle.”

“Oh, poor confused little boy. You have no concept of just how cool I am.” 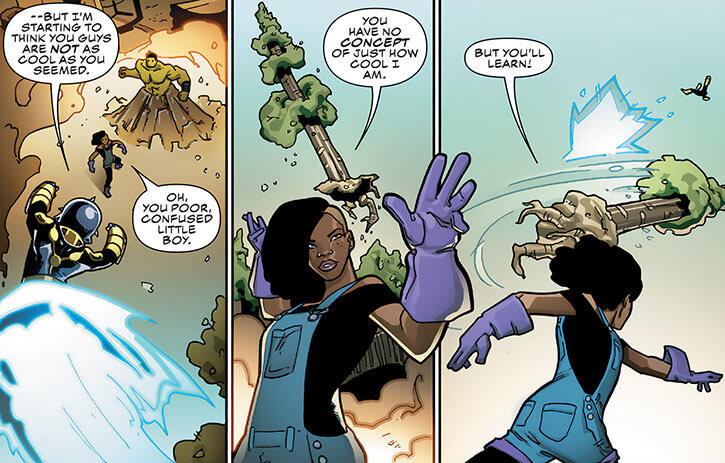 I’m never enthusiastic about writing up characters with so little material. It feels like I’m writing what I want, rather than modelling facts 😿. But these guys just seem so useful.

Crush did some impressive Dice Actions, which both felt like she rolled a double. Ultra-Luck solves that, and having the Freelancers have Luck Advantages work well with their “YouTuber who lucked out/went viral” vibe.

Telekinesis (plus Digging) rather than Earth Control. This is a mostly cosmetic decision, to better convey what she is doing.

Her Character Interaction work, at first glance, makes her a strong candidate for Attractive. However, she did just fine when she convinced Ms. Marvel (Kamala Khan) not to attack the Freelancers.

Superspeed emphasises the abnormal aspect with how quickly people react to Crush. A few sentences might convince them, which feels more like verbal semi-mind-control than normal human persuasion.

Essentially, within a single minute she can be as convincing as a normal person would be if given 15 minutes to talk and argue. It’s not Flash-type superspeed, but unnatural efficiency.