In his prime, Hogan (no relation) was an excellent pro wrestler, knowing many holds, locks, pressure points and the like. He was also in top physical shape.

Crusher Hogan was the top star of his wrestling league. Never interested in staged fights, Hogan was a “shooter,”. He was a genuine fighter and athlete who knew all the body’s weaknesses and was prepared to exploit them.

However, the crowds had fallen off. As a result Bobby, his boss, advised him to abandon the league and join the wealthy Global Wrestling circuit. His wife Marie also pushed him to take a job with real money. But Crusher was too loyal to switch.

Instead, inspired by an off-hand comment from his wife about his fans “just wanting a piece of him”, he came up with a way to bring back the audiences and save the failing league.

Taking the microphone after a match without informing Bobby of his plans, he refashioned his image into a bad guy (“heel”) by disrespecting the fans, the sport and his colleagues. Hogan offered a reward to anyone who could last three minutes in the ring with him. The promotion worked and fans lined up for tickets.

However, Crusher had borrowed the prize money from the Hammerhead mob, since he did not really expect to have to pay it. He then had the misfortune to be confronted by a young man he sarcastically referred to as “a little Masked Marvel.”

The young man was Peter Parker in his first public use of his spider-powers. After Peter picked him up and carried him up a pole, Crusher had to concede to his super-human opponent.

Presumably the gate from a full house was enough to keep the mobsters at bay. But Bobby had put up his house to cover expenses and his league was dissolved. Crusher’s marriage to Marie apparently ended as a result of the encounter as well, though it would seem that they did not formally divorce.

A ruined Crusher took a job as a minimum wage custodian at a local gym. There he regaled people like up-and-coming boxer Bobby Chance with tall tales about training Spider-Man, creating the web-shooters and providing the costume.

Years — if not decades — later, gym owner Madame Fang and her enforcer Manslaughter Marsdale discovered that Bobby Chance planned to sign a contract with someone else. They schemed to put the young boxer out of commission.

Afterward, Spidey played along with Crusher’s stories, making the washed-up wrestler a hero in the eyes of the gym rats.

Crusher was all about wrestling, and very loyal to his league – a straight shooter and a sportsman. Although he felt uncomfortable with the mic at first, he discovered he actually had quite a strong presence as an heel. His trash-talking rants made the blood of the fans boil so much that many actually volunteered to fight him.

After the fateful match, Hogan knew and accepted he was a has-been. He was content to just work around the gym. He wasn’t bitter about his unjust defeat – in fact he was a huge fan of Spider-Man, looking up to him and having posters of him in his cheap flat.

Even as an humble, impoverished, out-of-shape shadow of his former glory, his heart remained in the right place. Crusher still stepped up to fight in the face of deadly odds.

“Gimmicks. I ain’t about no gimmicks. I don’t need no face-paint. No hot-bodied manager. No foreign objects. No hillbilly overalls or no cowboy hat. I’m a wrestler. I wrestle.”

Crusher Hogan (at his peak)

The statistics above are for “Crusher” Hogan in his professional wrestling days, when he was at his peak. Currently, all of his Physical Attributes are 03, and his Martial Artist Skill is 04. His current Initiative is thus 012. 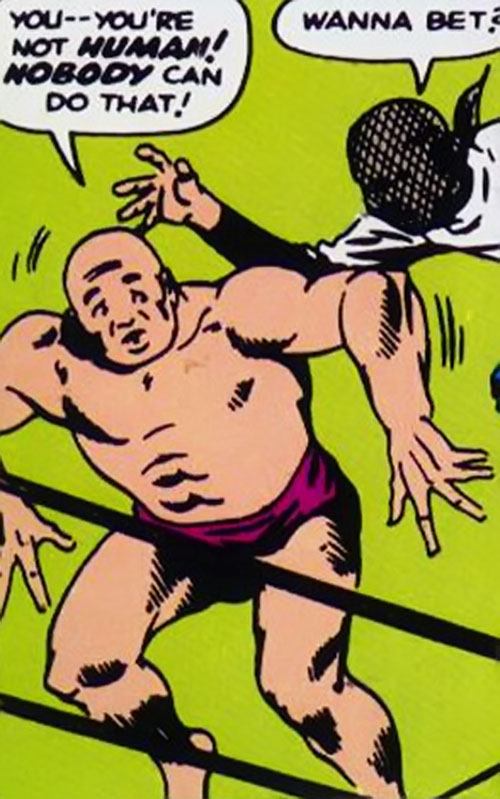 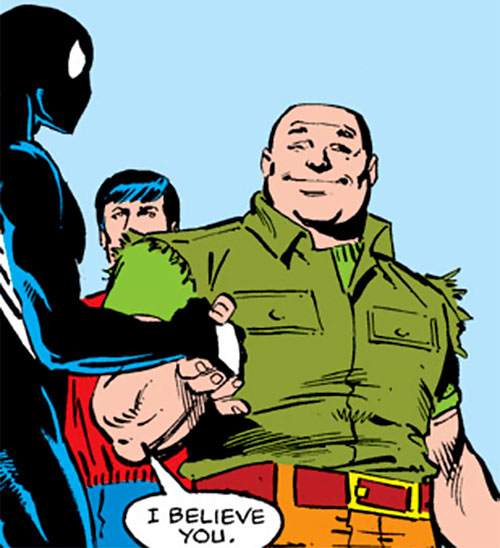