The Crusher is huge, extremely heavy and practically unstoppable. His steel-hard skin is so tough, that it will occasionally cause attacks to ricochet away from it and hit the attacker.

The bulky belt he wore was a “directional homing unit” that allowed him to easily find secret Cuban outposts in the US.

(While neither the names of Cuba or Fidel Castro are used in the story, the intent is clear. Thus, this writeup locates the relevant scenes in Cuba.)

During the 1960s, Caldwell “El Professor” Rozza toiled in his Cuban laboratory on super-weapon projects. These included at least one super-soldier program. However, his relationship with Fidel Castro’s government was execrable. Rozza’s megalomaniac, insufferably smug attitude likely was the deciding factor in that.

Still, his research looked like it could eventually be useful. Therefore, he was given a budget. There was an armed guard at the lab to keep an eye on him, though.

In 1967, Rozza triumphantly announced a major breakthrough. He was taken to see el Presidente. The Professor sarcastically told Castro he should drink the new chemical right away, and the annoyed Castro ordered him to drink it himself.

That is what Rozza was counting on. As soon as he imbibed the vivid green chemical he started growing much larger, and christened himself the Crusher. Castro shot him with his revolver, to no effect. He then ordered a cannon to open fire, which didn’t hurt the Crusher either.

Expecting treachery, he ordered the scientist to rush to the US to kill Iron Man (Tony Stark). Like many American heroes of that time, shellhead had an history of virulently opposing the interests of Communist countries.

Rozza knew that Castro was just trying to get rid of him. And, as the President had surmised, El Professor did intend to eventually take power in Cuba. Nevertheless, he followed the orders.

As time passed he continued to become stronger, larger and more inhuman-looking. Once in the US he made a beeline to a Stark Industries plant where the presence of Iron Man had been reported. He literally crushed everything on his path.

It soon became clear that Iron Man, then using the famous Golden Avenger armour, could not hope to contain the Crusher. Luckily, the armoured hero had been in that lab to, as Tony Stark, conduct experiments. These used a centrifugal force generator to create localised fields of increased gravity.

Grabbing the projector, Iron Man subjected the Crusher to this force. This multiplied the weight of the Cuban juggernaut until even the steel floor gave way. The Crusher thus disappeared underground. His amplified weight drew him toward Earth’s core.

As the Crusher was falling through a gigantic cavern, the effect of the formula wore off. He reverted to human form – which also somehow dispersed the gravity effect. As he wandered underground, the lucky professor stumbled upon a laboratory. This installation had until recently belonged to Tyrannus, who had lost his memory in an encounter with the X-Men.

Seizing the opportunity, Rozza brewed a new batch of Crusher formula. He modified it so the centrifugal force charge wouldn’t resume its effects.

Months later, the Crusher emerged from the ground in Florida, thirsting for vengeance. Using his Cuban-issued belt, he located a secret Cuban base. El Professor forced the spies manning it to take him to Tony Stark’s lab.

The vengeance-mad Crusher ploughed through walls and buildings whilst searching for Iron Man. Stark had the entire factory evacuated.

Iron Man was once again overpowered by the Crusher, despite being the more mobile and more rational fighter.

While wrecking everything in an attempt to hit Iron Man, the Crusher took an hostage – Whitney Frost. Iron Man agreed to exchange her for the centrifugal force generator that he had once used against the Crusher. Delighted, Rozza prepared to send Iron Man crashing all the way to the Earth’s core.

Stark gambled that the Crusher was too strong to handle the delicate instrumentation. He was right. As the Crusher was briefly blinded by the explosion of the generator, Stark grabbed him and flew upward. He hoped to knock the Crusher out by depriving him of oxygen. But the Crusher struggled free, and fell into the ocean from a great height.

Though the impact could not harm the Crusher, he sunk like a stone and drowned.

However, his body was later found and analysed – which would eventually result in a new Crusher !

El Professor is verbose and grandiloquent, with more than a touch of dramatic megalomania. In other words, he has vintage Stan Lee villain dialogue.

From time to time he had a Cuban accent, but that was pretty variable. He tends to use Spanish words in his speech, because comics.

Rozza has a titanic ego, and deals very poorly with frustration. That went double after the Crusher formula empowered him.

He doesn’t care about anybody else’s life. He is particularly vengeful and violent.

“Guard !! You may send for El Presidente ! The time has come ! My formula is ready ! I have succeeded even beyond my wildest expectations !”

“¡Silencio! Do not speak to *me* of failure ! Soon, I will be the most honored of men. For I have done — the impossible !”

“This is my secret, Americano ! Your employer… Stark… is not the only inventive genius in the world ! And now — prepare for your doom !”

“Now you face the mightiest man alive ! Now you stand in the presence of… the Crusher !”

“This time I act not on the whim of some scheming dictator — but on my own surging, unstoppable need for revenge !”

“¡Caramba! Some manner of civilization… here, beneath the very earth !”

“Iron-clad jumping bean ! What kind of way is this to fight ? We will see if you still make jokes, galvanised gringo, when I find Tony Stark’s centrifugal force ray !” 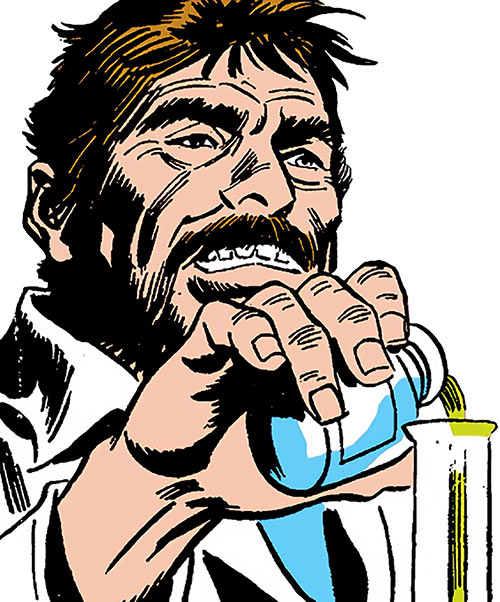 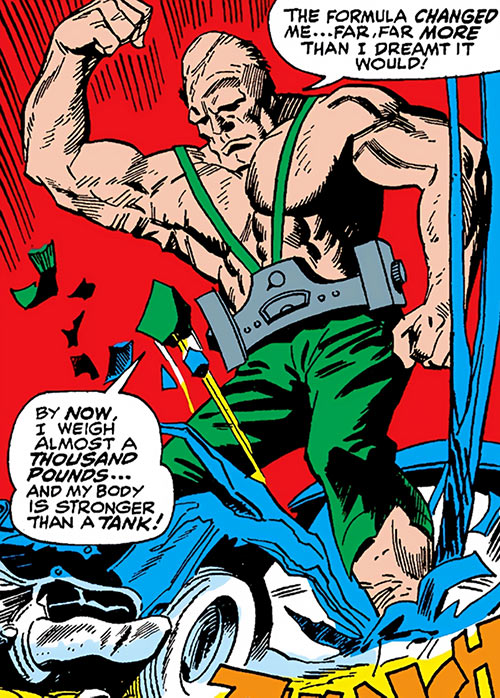 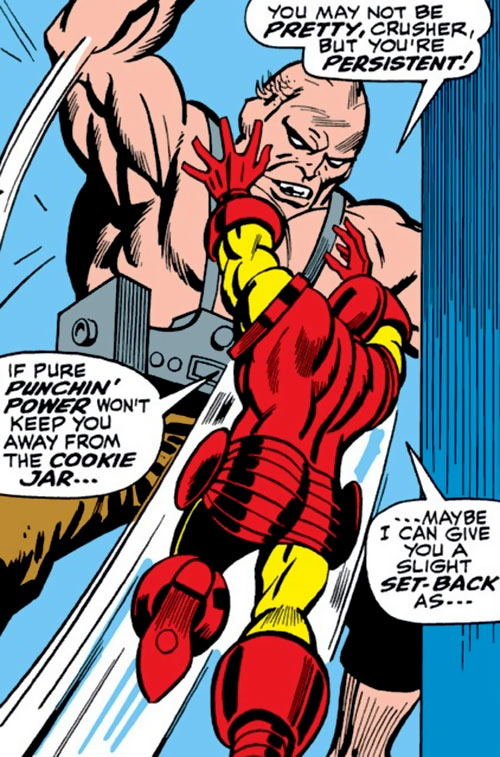 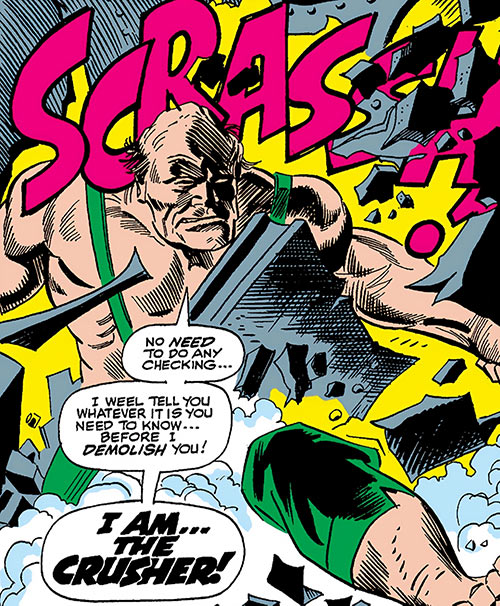 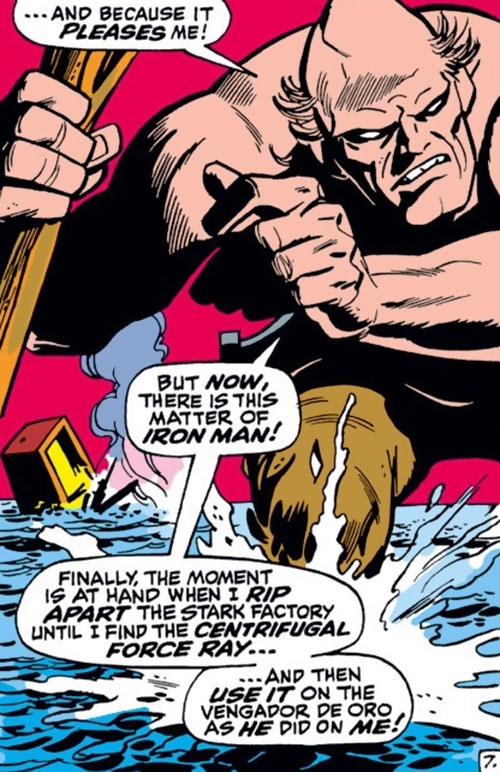