Lovecraft first came to prominence among geeky subcultures. Tabletop role-playing games based on his Cthulhu mythos were classics, especially in Europe.

Thus, wondering what stats this being would have in the DC Heroes RPG was a cosmic inevitability whose many impossible angles will shatter the mind of those who gaze at it for too long. As usual.

Cthulhu is an alien lifeform, referred to as a Great Old One. As such, he’s an ancient colossal beings that ruled cosmos for millions of years.

The Great Old Ones were cast down for their dark magic practices by the Elder Gods themselves and banished to various locales across the universe. Cthulhu and its Star Spawn arrived on Earth millions of year ago, and ruled the continent R’lyeh.

After thousands of years battling the Elder Things, pentagonally-focused beings who also invaded Earth, the continent of R’lyeh was sunk beneath the seas. This trapped Cthulhu into an eternal sleep (treat this as Suspension: 40).

Cthulhu may be asleep, but his dreaming continues to corrupt the world. When R’lyeh nears the ocean surface (as it does every few decades), Cthulhu’s dreaming psionically invades the subconscious of the human population. That inspires Cthulhu cultists and drives many psychic-sensitive insane.

A horrific behemoth with cuttlefish, squid-like head and human body. Vestigial wings grow from his back, and his clawed hands and feet are enormous.

Cthulhu has total control over its body. He can grow his vestigial wings for actual flight, or stretch his tentacles for great distance. But he must keep his general shape and form and therefore will always be encountered with looks quite similar to this general appearance. This may be related to his restriction to fit just three dimensions.

Cthulhu is incredibly powerful. He considers humanity as either total slaves that must offer their lifes and souls to their true owner or as ants to be destroyed.

Despite being dormant, Cthulhu’s mind continually prepares the world for his return. Every time he nears the ocean surface, thousands of humans are stricken with terrible nightmares, and strange, dark events take place. As with many beings of the Mythos, those who observe Cthulhu risk being driven insane due to a warping of reality.

All of that can only conjure a terrible and immensely powerful force of personality, one that could make even the mightiest tremble.

Asmodel, Trigon, Darkseid… Cthulhu can just fit perfectly in the DCU. If used alone, perhaps the Lords of Order trapped him beneath R’lyeh.

If introducing the entire Cthulhu Mythos to the DCU, mystic beings like Swamp Thing, Dr. Occult, John Constantine, Arion and Dr. Fate will surely have battled Cthulhu’s minions attempting to recover his grip over our world. The exception could be Phantom Stranger, which many rumour would be one of Nyarlathotep’s thousand forms.

The most active trend of combatants against the Cthulhu Mythos would have been contemporaries to the early pulp heroes, before the masked vigilantes entered the scene. The Spider, Ka-Zar, the Shadow, the Green Lama or Solomon Kane would certainly have fought this influence !

There are also established “bridges” between Lovecraft’s mythos and the world of Conan.

Cthulhu (or at least the Great Old Ones) may already exist in the DCU, as seen in the Batman/Starman/Hellboy crossover.

Drawbacks:
Altered Anatomy, Arch enemy (Outer Gods), Exile (Involuntary, at R’lyeh), Strange Appearance, Attack Vulnerability: Magic, -2 CS; Misc: subject to any other drawback inherent to the Great Old Ones (such as being warded of by some symbols and entities).

Rituals:
Cthulhu likely knows most Rituals in existence, but two classics include:

I used Omni-Power instead of Sorcery so he has a reason to use all those worshippers that Multi-Attack with his Occultist when performing really powerful Rituals.

Source of Character: Call of Cthulhu Role Playing Game (both Chaosium and D20) and some Lovecraft tales. 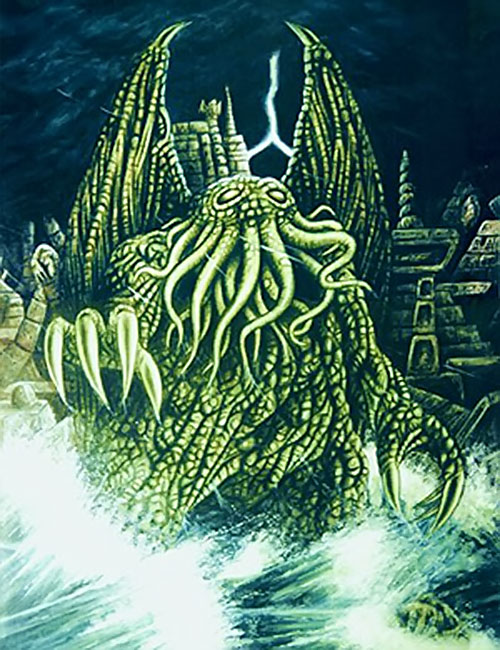 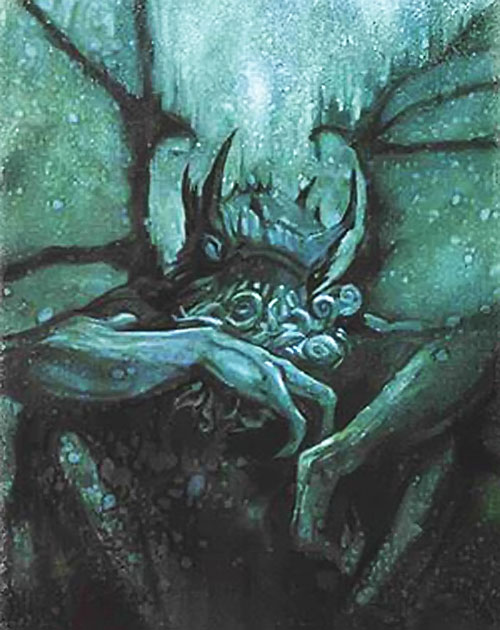