Jasmine Destine is the offspring of a powerful djinn and an enchanted human, and as such she inherited some unusual traits from her parents. Her original body was extremely long-lived, and up until its death remained in its physical prime for hundreds of years.

Upon her physical death, Jasmine became of being made up of pure psionic energy capable of permanently transferring her essence into another living being and assuming control of the host body, whether human or animal. By using this ability again and again (40+ times so far), Jasmine has become the oldest living child of the Clan Destine.

It is unknown how long Jasmine could survive outside of a host body, but she hasn’t made any effort to find out. Jasmine usually transfers from body to body when it’s convenient; either at the moment of the death of the previous host or when her currently possessed body is about to die.

In addition to her ability to possess host bodies, Jasmine has very powerful psionic  abilities. She easily uses many advanced telepathic techniques including:

She is also a fairly potent telekinetic.

Over the centuries, Jasmine has dabbled with sorcery and the occult in the attempts to bolster her already formidable psionic abilities. Like her mother, she has more than a passing talent with sorcerous energies.

Jasmine Destine, also known as Kay Cera , was the first born in a long line of children of Adam Destine and his Djinn lover Elalyth. With the extreme longevity of the Clan coupled with “Cuckoo’s” penchant for body-hopping, Kay has held many identities and lived many of lifetimes.

Her earliest recorded adventure occurred in 1519. During this time she was in the newly-discovered Mexico, exploring the territory with Hernán Cortés’ conquistadores while inhabiting the body of a Spanish nobleman. Her younger sister Grace was posing as her valet.

It was at this point that Cuckoo had begun to study magic, and learned to channel eldritch forces to enhance her powers.

When the conquistadores attacked the Triple Alliance, Grace, whose emerging psychic gifts were too immature to use as weapons, fled with Cuckoo and some of the locals that they had befriended. However, the two were separated.

On her own, Grace found what she thought was a ley line and tried to channel its eldritch power in order to bolster her psychic strength. But instead opened a doorway into the dimension of a demon named Synraith.

Cuckoo arrived in time to seal the doorway, but Synraith now knew how to return to the earthly plane.

In 1526 Cuckoo travelled to Peru, and at some point during or prior to this, learned a Mayan dialect. In the 1860s, she inhabited the body of Natsume Masako, the wife of Prince Sakai Masaaki. During this time, she was attacked by the vampire Marietta Borgezia.

She reacted by killing Borgezia’s spirit with her own consciousness, which resulted in the vampire becoming Jasmine’s new host. As all the vampyr created by Borgezia were freed of their blood thirst with her death, they gratefully came to regard Jasmine as family, even as she would later move onto other host bodies. 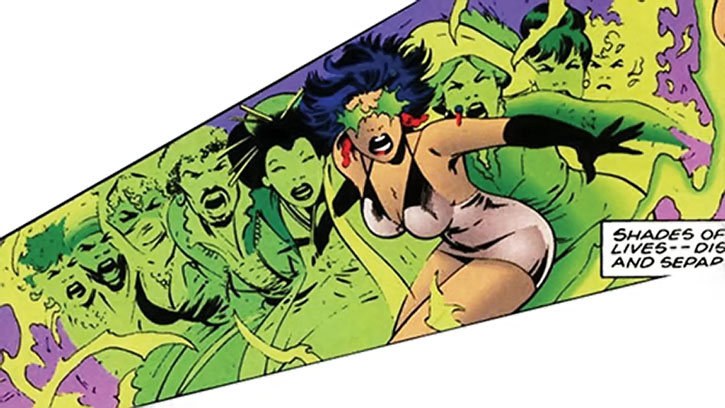 Her next known incarnation was among her most recent, when she inhabited the body of a Native American woman. During this time, Cuckoo was instrumental in once again helping her sister Grace and a young mutant telepath named Charles Xavier battle the demon Synraith. This battle occurred many years before Xavier went on to form the X-Men.

During the 1990’s she lived as fashion designer and business mogul Kay Cera, creator of the Kay Cera label. She led an extravagant lifestyle and owned homes all across the globe. Despite her hectic lifestyle, she still managed to be on hand when Adam killed his son, Vincent, and created a rift among the family.

Eventually, due to the actions of the young Destine twins (Rory and Pandora), the existence of the family was discovered. Unlike their siblings, Pandora and Rory’s powers manifested in their early teens due to their unique circumstances as twins. Rory, who was absolutely thrilled about his gifts, convinced his sister Pandora to follow him in becoming super-heroic champions, and the two started getting into superpowered mischief.

One such adventure brought the twins upon a battle between the scientific organization A.I.M. and lackeys of the mutated being Lenz. The twins tried to stop them by taking the object of their dispute, the Gryphon, but soon fled the scene.

Pandora’s cape was torn off and then retrieved after the battle and due to a label sewn into the fabric, led to the death of several of the family. You see, Rory and Pandora’s costumes were gifts from their “auntie” Kay Cera, who was thoughtful enough to include her private designer label on the capes.

Kay was in Barcelona Spain, when she was attacked by Lenz’s mutates. They surprised her in her home and murdered her body, but not before she used her psychic abilities to transfer her consciousness into the body of a stray cat. She watched helplessly as the mutates retrieved her corpse and her notebook with all of the information anyone would need to find the rest of the Clan.

As the mutates left, Kay prowled the back alleys of Barcelona, searching for a new host body. Fortune smiled upon her as she came across a prostitute in the middle of a dispute with her pimps. Kay watched eagerly as the beautiful woman was shoved around, attacked and finally murdered by her pimps. When she fell dead, Cuckoo telepathically tormented her murderers and then “possessed” her corpse.

After telepathically coercing her brother Albert to heal her new body, Cuckoo returned home to the rest of her family. She set out for vengeance/justice on those who “murdered” her. She was instrumental in coordinating the other family members into defeated their enemies, and in staying together as a family once again.

When the danger had passed, Kay used her psychic abilities to convince her former co-workers that her new body was the heir to Kay’s fortune. She then assumed control of Kay Cera’s fashion empire once more. This led to an assassination attempt on herself, but this was stopped by her family members, Rory and Pandora, with Spider-Man in tow.

When the demon Synraith tried a last ditch effort to return to Earth’s dimension, it drew Cuckoo and the others responsible for its containment (including Professor X) together again. A brief misunderstanding between the two families of X-Men and Clan Destine caused the heroes to scuffle. But soon the demon was defeated and finally killed as the heroes closed its dimensional gate.

Cuckoo’s current body, which formerly belonged to Barcelona prostitute Pepa Pérez, has been described as “impossibly beautiful”. She is a typical Alan Davis heroine, tall with long powerful legs, large round breasts and a thin athletic waist.

Depending on the point in the series, her skin tone has been depicted as Caucasian, and other times with brown skin of varying darkness. In the majority of her depictions, her skin tone is definitely brown (or olive) in complexion. Her hair is one uniform length and blacker than the night.

In costume, Cuckoo wears a swimsuit like green unitard, with an open triangle point down in the center of her chest. This of course, exposes a great swathe of her impressive bosom. The unitard itself has one full leg covered as well as one full arm (including the hand).

Her right arm and left leg, are left bare, but she wears a green elbow length glove and a green leathery thigh high boot on the respective limbs. A green gossamer thin cape like cloak and a set of green goggles complete her costume.

Jasmine (aka Kay aka Cuckoo), is quite frankly a bit of a spoiled, amoral and arrogant prick who puts her own needs before anyone elses. She is confident, practical, stylish and definitely dances to the beat of her own drummer. She has been repeatedly called a hedonist, and will casually use her powers for her own benefit.

If reading or manipulating the minds of others without their permission gets her out of trouble, eases her boredom or simply addresses her curiosity she’ll do it without reservation. She is quite spiteful (especially towards her younger, more responsible brother Walter) and has little need or desire for the approval of others.

That being said, she seems to have a true affection for the twins, and despite the relative parity in their ages seems to also want Adam’s approval.

“I am old enough to live only for the moment … and to live every moment like it were my last.”

“Psychic attacks are my speciality.”

(While watching Cuckoo telepathically altering a lawyer’s memories)
Sam: “Kay what are you doing ?”
Cuckoo: “Shssh ! I’m concentrating. Rewriting someone’s memory isn’t easy.”
Sam: “This is wrong.”
Cuckoo: “Don’t be silly Samantha. There is no point in having power if you don’t use it.”

Samantha: “You really humiliated him. All he did was ask for a dance !”
Cuckoo (grinning): “I asked him his name. He told me to guess.”
Samantha: “That was a line of chat, not an invitation to read his mind. You have no morals or scruples… no guilt about how you abuse your telepathic prowess.”

Adam: “Then we shall cover your obligation.”
Dominic: “Right, I don’t mind taking your turn Walter.”
Cuckoo: “I mind. Walter is always reminding us that he is the twin’s primary guardian.”
Walter: The only time we saw you was when your hedonistic lifestyle allowed.”
Cuckoo: “Don’t push me Walter.”
Walter: “Or what, you’ll leave ?!?”
Cuckoo: “No, I’ll activate your metamorphosis.” (telepathically enduces Walter’s transformation)

“I have lost a degree of control since transferring to this host.”

Cuckoo: “An ’amoral fractured psyche‘ has its uses, eh Chuck ?”
Charles Xavier: “Only in empathizing with a demon.”
Cuckoo: “That’s quite witty Chuck… for a bald guy.”

Walter: “All I asked was that you help out by peeling a few spuds.”
Cuckoo: “I don’t do menial work. You should have a cook… and maid.”

(Confronting Adam in front of Vincent’s grave)
Cuckoo: “Still living in the past old man ? Vincent was a bad seed. You did what had to be done. Spending night after night sitting here achieves nothing.”
Adam: “Have you truly lost all compassion daughter ?”
Cuckoo: “Your idealism has gotten me killed more than once.”
Adam: “You must care about something.”
Cuckoo: “Nothing you’d consider noble or virtuous…”

(After Adam has a vision of his children’s impending danger)
Cuckoo: “Then I’m glad I stayed around this backwater dump if something interesting is finally going to happen.”
Adam: “Interesting… you must know that the events I foresee always involved the suffering or death of one of my children.”
Cuckoo: “I can live with that… as long as I’m not the one who suffers and dies !”

The Clan is such a minor group within the Marvel Universe. They could conceivably be inserted wholesale into the DC Universe with very little modifications to their back-story. It is almost certain that with Jasmine’s longevity, she would surely have come across the likes of Vandal Savage, and would have something in common with the Immortal Man. 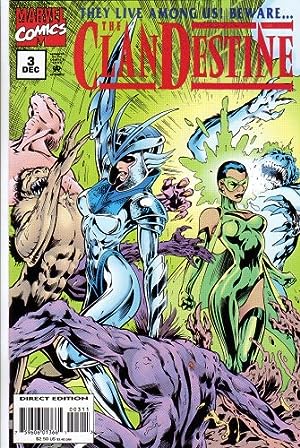 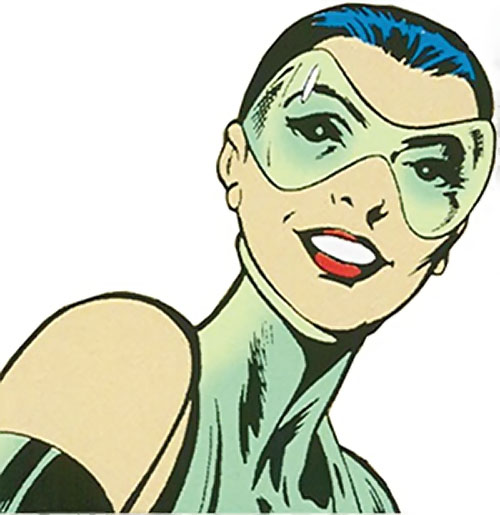 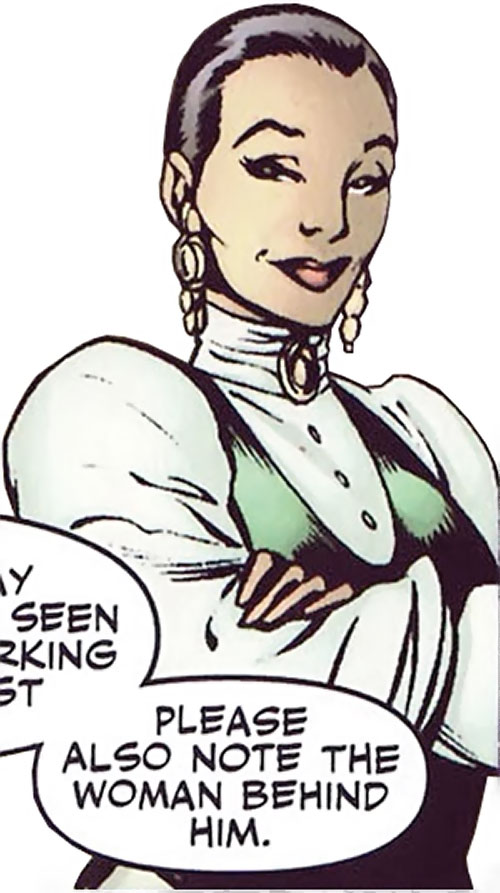 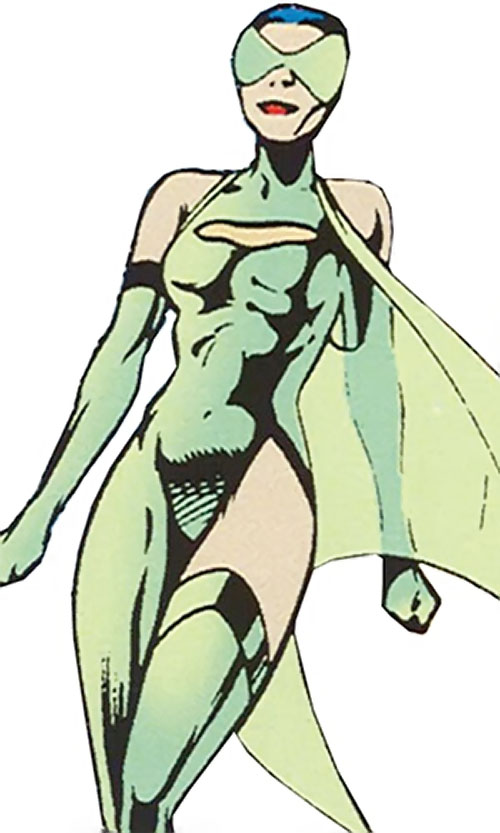 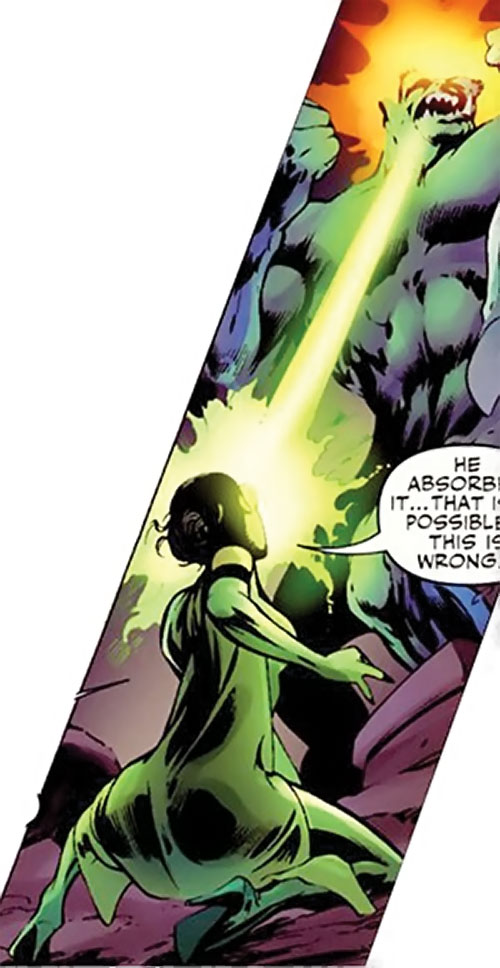 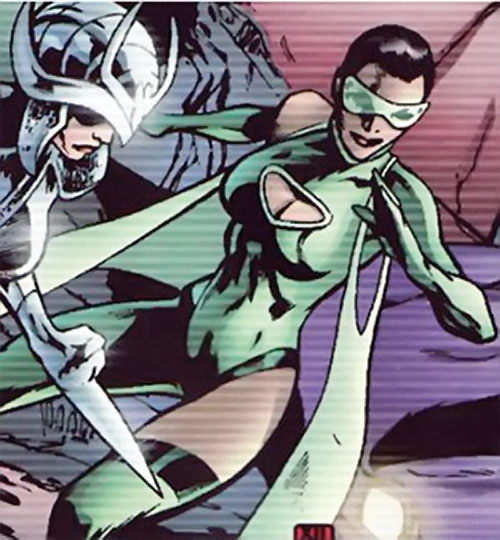 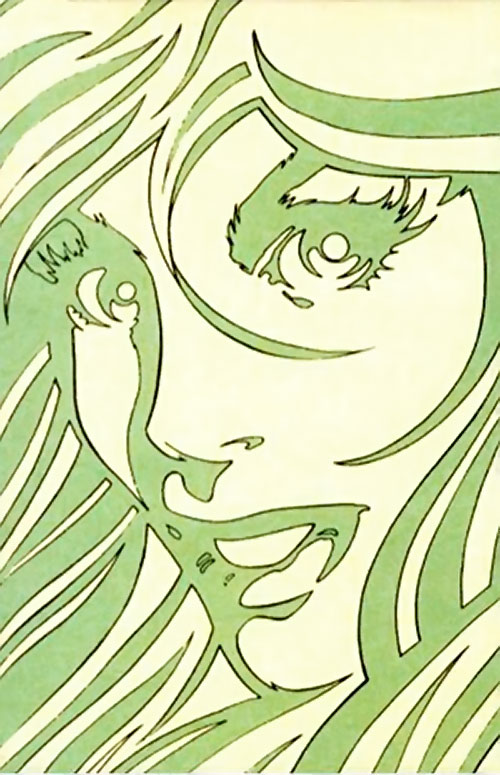 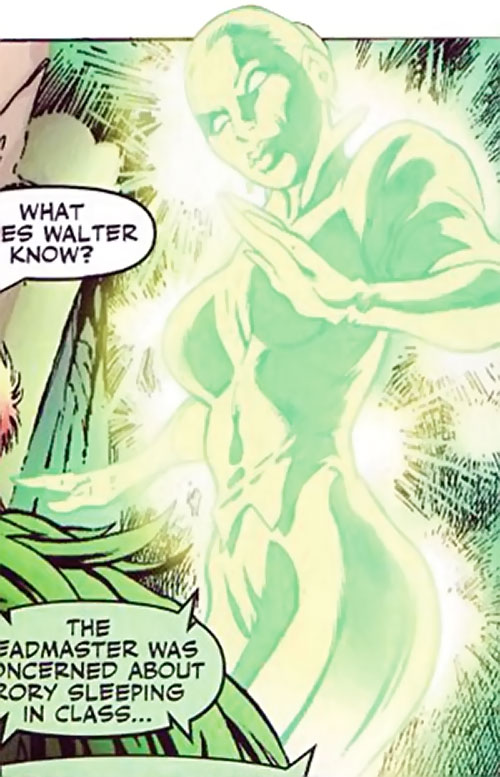 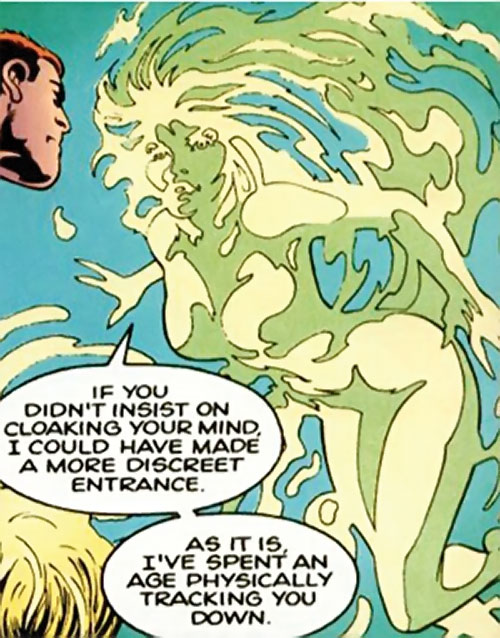 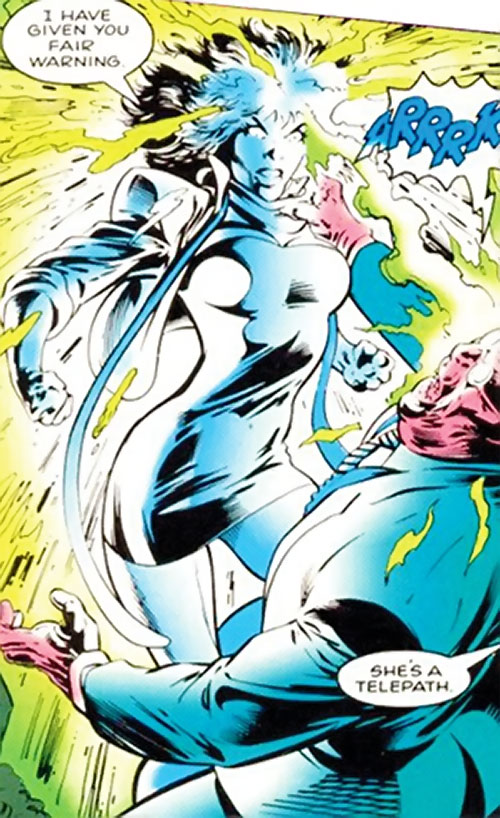