Serious Sam is a series of silly, old-school video games about shooting all the things with all the guns all the time. The first game was published in 2001. It involves an alien invasion, total war, time travel — and guns. Which you shoot at things.

As you can seen Cucurbitos are a good example of the over-the-top Serious Sam design approach.

Cucurbitos were burly butchers with a chainsaw surgically attached to their arms.

From the NETRICSA summary: “This abomination was the result of an experiment of Mental. His time-travel agents had brought him 20th century media, with which he constructed his creation.” 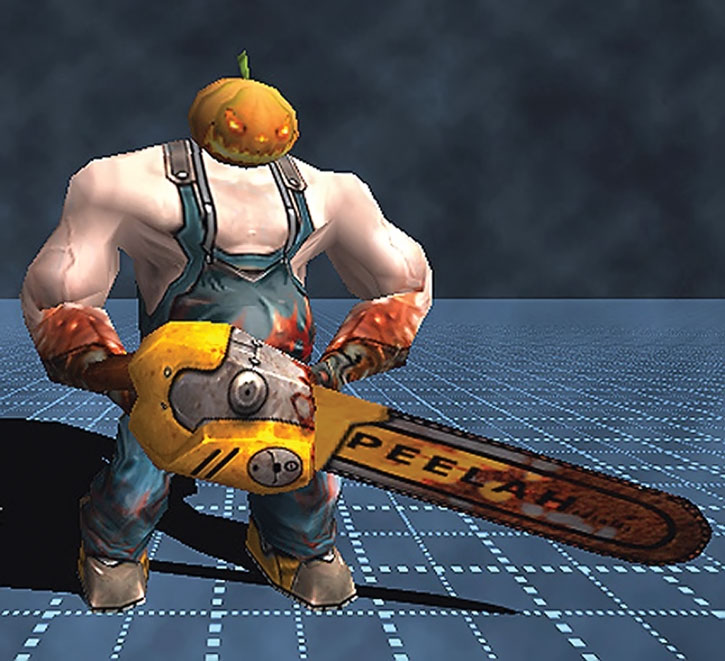 Offsetting this relatively normal appearance is its head, a Jack-O’lantern whose eyes and mouths glow from an internal flame. And the gargantuan chainsaw cybernetically attached to its forearms.

Any whimsical magician or mad scientist might create these macabre beings for use as cheap muscle.

Drawbacks:
CIA (Making their special charge attack — see below for details), MPR (Mute, Minor because they’d have little to say anyway), SPR (No hands — the chainsaw is grafted to the wrists), Strange Appearance.

Attack of the Killer Pumpkins

The Cucurbitos’ signature attack is a bull rush punctuated by wild swings of their chainsaw. Though the attack has more force behind it, the drawbacks outweigh that benefit. The charge is very linear, making it easy to dodge and to anticipate the Cucurbito’s path of movement for counter-attack.

Their lumbering attempts to come to a stop after each charge and reorient themselves toward their opponent likewise leave them vulnerable to attack.

A Cucurbito making a charge expends all actions on the attacks, spending an Auto Action on movement, a Dice Action on the attempted strike with the chainsaw, and another Auto Action coming to a stop and turning around to face their opponent again.

While the attack gets a -1CS bonus to the target’s RV, it suffers a +1CS penalty to OV and reduces the Cucurbito’s Physical OV against any attacks made by others that phase by -1CS. 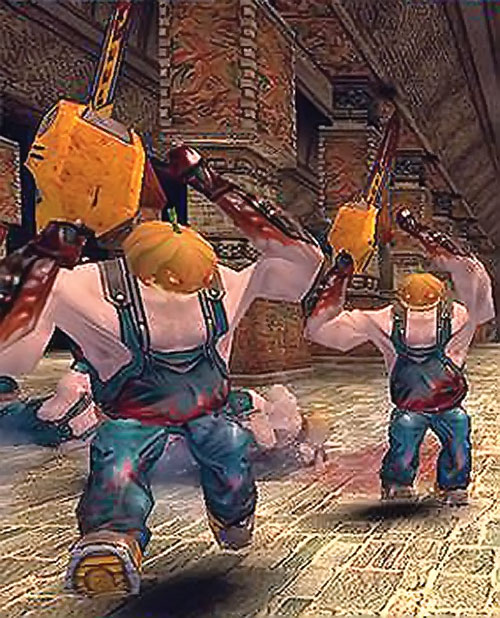