Cursed Cass is a member of the Freelancers mercenaries.

However, she still has a flinching reflex when she realises she’s about to get hit.

Most of her clothing is extremely resilient. Unstable molecules may be involved.

Cass routinely carries small explosive devices, such as grenades and sticks o’ dynamite. She also often has a backpack with a large, powerful concussive charge hidden within.

On some missions, she’ll have a suicide vest with a half-dozen C4 charges.

Her usual tactic is simply to run up to her target and detonate something. Obviously, she doesn’t care in the least about collateral damage.

Cass doesn’t seem to have actual demolition skills. Or… any skill, really. 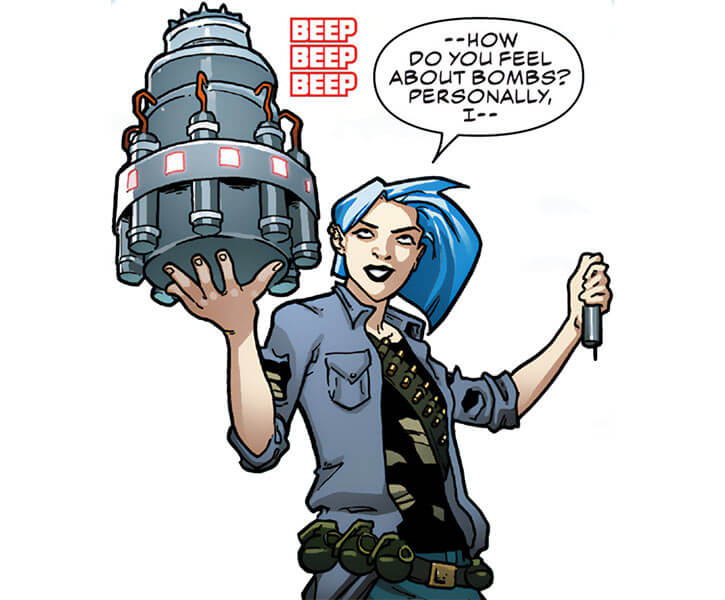 Cass has a narrow, angular face and unusually pale skin. She goes for a sad girl punk look.

Cass seems to have a gloomy, bitter, emo-ish outlook.

Why is unclear. AFAICT she’s a wealthy, young, healthy, White, indestructible person living free and in luxury. Given the general style of the Freelancers, it’s possible that her feelings of being put-upon are solely because her power isn’t flashy enough.

In some circumstances there’s a none-too-stable, strung-out vibe to her.

She seems to be the greediest Freelancer. Which takes some doing. 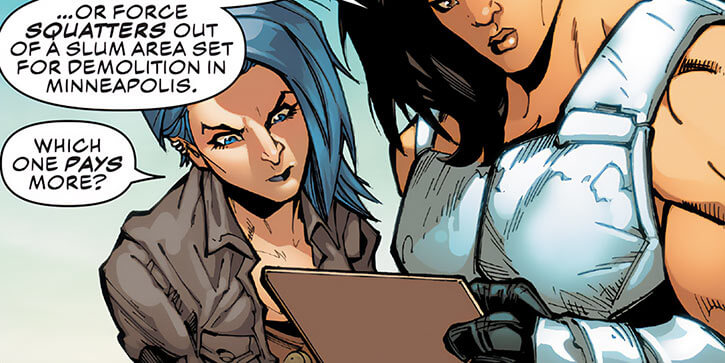 Nova: “Why do they call you ‘Cursed Cass’ ?”
Cass: “You know the saying, ‘unlucky at love, unlucky at cards, basically hopeless at basically everything’ ?”

Cass will often have a mission-specific charge, carried in a backpack or as a suicide vest.

But of course, the point is that it’s not how invulnerable characters usually work. So this could easily be contradicted by an attack bypassing Cass’ invulnerability. Which *has* become a cliché, mind…