Cutthroat Island is a 1995 period comedy-adventure movie. It has lots of pirates and is set in the 1660s in the Caribbeans. One of the movie’s leads is Morgan Adams, played by Geena Davis.

Cutthroat Island was meant to be a blockbuster, but the production broke real bad. The project thus ended up as a disaster, that essentially destroyed its studio. But on the other hand, Geena Davis as a XVIIth century pirate captain.

Morgan Adams grew up with pirating, it’s what she knows. Morgan is naturally skilled with animals, as is apparent with her riding and in her pet’s discipline in following her commands. At one point in the film she is riding on a beach, trying to escape the authorities. She urges her horse along and gets well ahead of her pursuers.

As for her physical abilities, she is tougher than most men and can take on up to three trained fighters at once in a fist-fight. Morgan has excellent skill with bladed weapons, her favorite is the cutlass.

Since her father’s death, Morgan has inherited his ship, the Morning Star and its crew. As a natural leader her crew has become very loyal to her, even giving up a fortune and retirement so she could continue enjoying the thrill of pirating.

Morgan’s story starts after she is already an adult. She is wanted in most any port for piracy.

A lost treasure, and a map to its location in three pieces. Three brothers, each had a piece of the map. Morgan’s father, Harry, had one of these pieces. Mordekain and Dawg have the other two. Dawg was willing to kill his own brothers to get the treasure.

He interrogated Harry until he jumped to his death claiming the map was only in his head and so was taking it with him to the grave. As it turned out it was in his head, tattooed on his scalp hidden by his hair. Morgan took her father’s scalp with her dagger when she couldn’t save him.

She then took the Morning Star and looked for an interpreter since the map was in Latin. She went to join with Mordekain all the while being chased by the authorities. Dawg followed her and killed his other brother when he realized they were joining forces against him.

Morgan was shot before she could escape this encounter and needed medical attention. With two pieces of the map, William the interpreter, found Cutthroat island. Dawg followed them and took the treasure from them as well as their ship, The Morning Star.

Only Morgan escaped. She got aboard the Morning Star again and took back control of her ship. She then moved her ship up for an ambush of the Reaper, Dawg’s ship.

After a long fight with lots of cannon fire and many explosions, Morgan killed Dawg and got her revenge as well as getting the treasure. There was approximately four million pounds worth of treasure. It was divided equally by all involved.

Morgan asked her crew to continue the pirating business that she loved. They were last seen headed for Madagascar.

Morgan is a tall woman with long black, curly hair and daring eyes. She will quickly give a wide beaming smile, especially when she is doing what she loves! When first seen she’s dressing herself in filthy brown breeches and a vest. She also has a wide leather belt with a pistol and a dagger. Later, we can see she’s wearing sandals.

Aboard her ship, Morgan wears a pair of dark pants and a thin white shirt. The pants fit more tightly than the first pair and are worn with the same leather belt. The shirt is almost thin enough to see through, and very loose. It has a collar, but that is hidden under her hair, and it has ruffled cuffs which are hanging open and unbuttoned.

A metal cross hangs around her neck on a long leather cord.

As Captain of her ship she will often dress in men’s fashion, perhaps to gain respect from the men working for her.

Morgan cleans up pretty nicely, as we see at the auction, in a white (presumably silk) gown trimmed out with metallic lace, a cocoa colored veil, some pearls, and an ostrich feather fan. The skirt and bodice are separate, and the skirt has a light, airy feel to it. It is worn without a farthingale. This is a lovely, simple look for Morgan.

When visiting Mordakain, she wore a corset with a white dress and just so you don’t forget she is a pirate; a thigh holster with a sawed-off rifle under her dress on her right leg. No matter what she is wearing, Morgan doesn’t allow it to affect her fighting ability, if it does, she alters it.

The beautiful and deadly pirate Morgan Adams. While other women faint or complain about their corsets, Morgan Adams laughs at danger, swings a mean right hook, and makes effective use of her stiletto to get what she wants.

She loves treasure and riches but loves the thrill of getting it even more. Her true love is pirating and she wouldn’t trade it for all the money in the world!

“Stop your chatter and say something Latin-ish.”

(About the Lieutenant’s gun): “By the way, that won’t work. See, I took your balls.”

Morgan (to William after he asks her to be charitable): “I brim with charity. I am charity’s very soul. And because I am so charitable, I will maroon you on a rock the size of this table, instead of splattering your brains across my bulkhead… as you deserve.”

Dawg: “Come to seek my treasure have you !”
Morgan (draws her cutlass and dagger): “Let’s finish this.”

Dawg: “You plannin’ to fight me with that little stick ?”
Morgan: “No, uncle. With this !”
(Morgan reveals a loaded cannon and lights it, aiming it at Dawg)
Morgan: “Bad Dawg !”

Perhaps Conan needs to get a ship to take him somewhere and he books a ride with Morgan.

Morgan Adams (at the end of the film)

A 669 points Character (without equipment)

Drawbacks:
Minor Irrational Attraction toward William Shaw, Misc.: She has a bounty of 100 pounds for Piracy and Looting in Port Royal and likely other rewards for her dead or alive in other cities.

King Charles has been trained by Morgan and will react to her voice commands. He’s a 57 points Pet.

Writeup completed on the 1st of September, 2011. 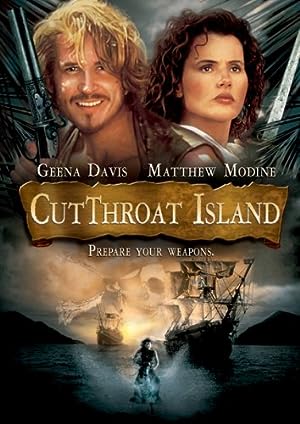 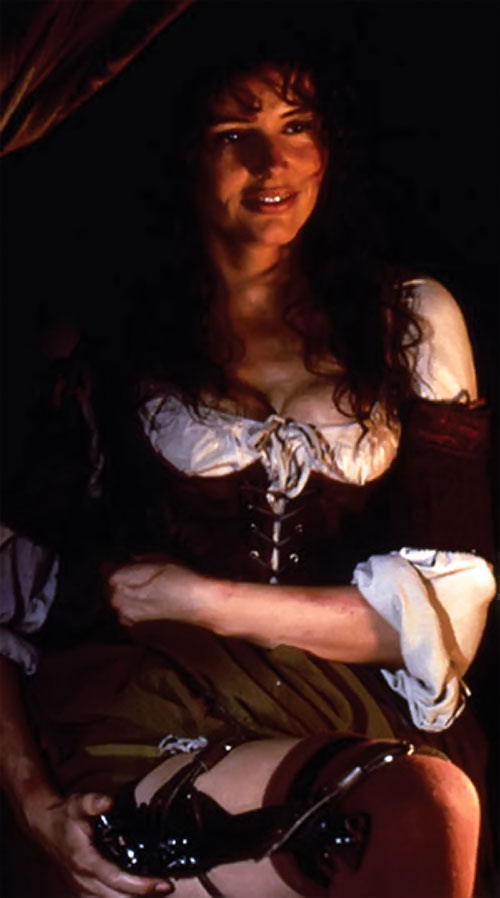 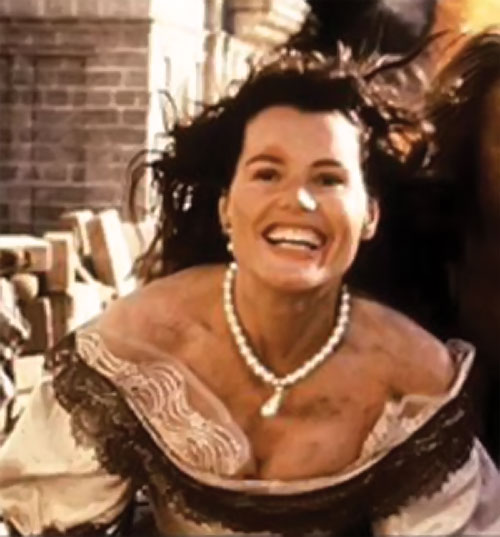 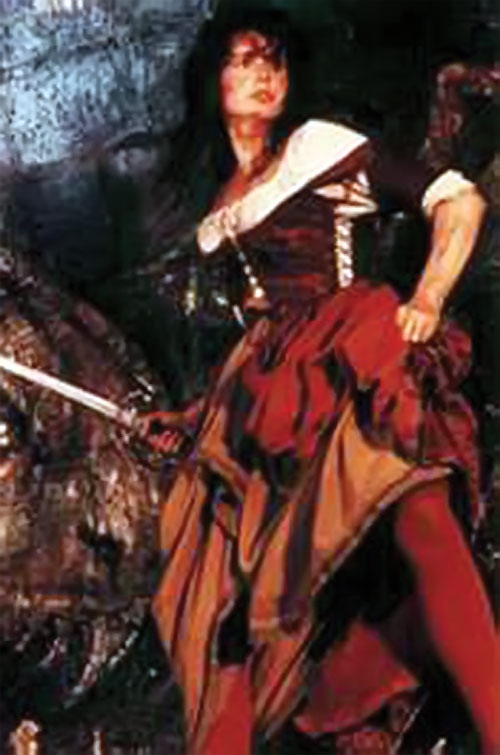 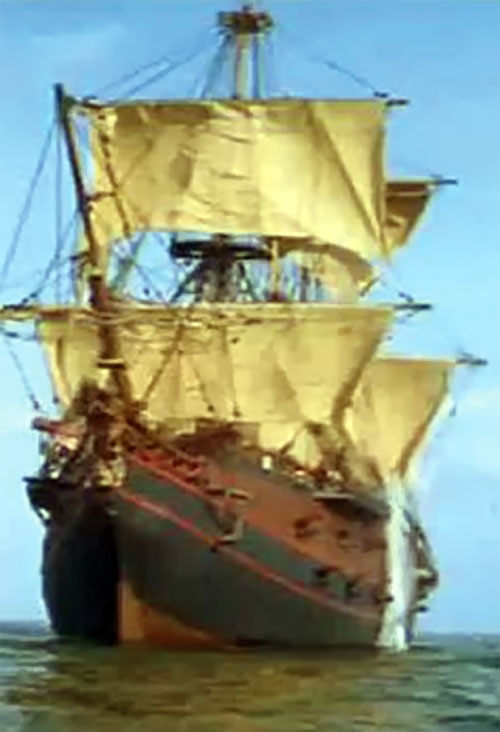 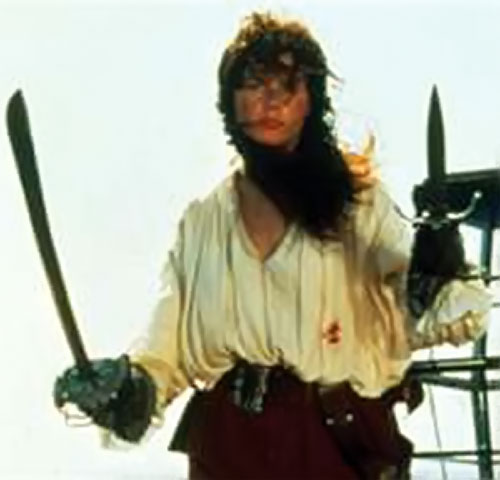