Cutthroat is a professional fighter and assassin. He can handle a wide variety of weapons, and prefers short bladed weapons. Cutthroat always carries some knives for either wielding or throwing. In the past he had a sort of gyrojet pistol.

His most distinguishing asset is his Adamantium-edged blades, presumably employing secondary Adamantium . These can shear through most forms of body armour and cut most superhumans. Yet Cutthroat’s are not as impressive as the best such weapons (like the ones used by Agent Zero).

Cutthroat prefers dirty tactics to mano-a-mano combat. If he has a choice, he’d rather stab somebody in their sleep than meet them in open battle.

“Danny” Leighton was the second oldest of the Leighton brood. Willy, the eldest brother, had had his legs crippled in Việt Nam. Thus, none of his youngers siblings enlisted as he insisted they should. Instead, Danny and the youngest brother, Ricky, ran with the Savage Crims street gang.

The Crims were led by a deadly young man, Brock Rumlow. They regularly fought tough street gangs such as the Yancy Streeters. Even their kid sister, Rachel Leighton, hoped to join.

When she tries to, Rumlow beat her up and raped her. When Willy learned this, he and Ricky came to the gang’s hideout with a rifle. Rumlow killed Willy with a thrown knife then left town. Ashamed that he hadn’t faced Rumlow with his brothers, Danny left and never saw his family again. Ricky, shocked by these events, was killed during a stick-up three months later.

Most of the survivors of that night would become costumed criminals :

Before he adopted the name Cutthroat, Danny Leighton had a career as a thug and enforcer, then assassin, in Europe. His skill with knives, both wielded and thrown, became his trademark. This is what led to his nom de guerre and costume. He was somewhat obsessed with knives ever since Rumlow killed Willy with one.

Cutthroat’s later took his first contract in the US for Texan circus-owner-cum-criminal, Amos Jardine. Jardine wanted Spider-Man killed publicly, under one of his big tops.

The X-Man Nightcrawler overheard and intervened. The two acrobatic heroes then teamed up to pursue Cutthroat. Cutthroat triggered a stampede of circus animals to hinder his opponents, and managed to blind Nightcrawler with a magnesium rocket. But Spider-Man then stopped him. 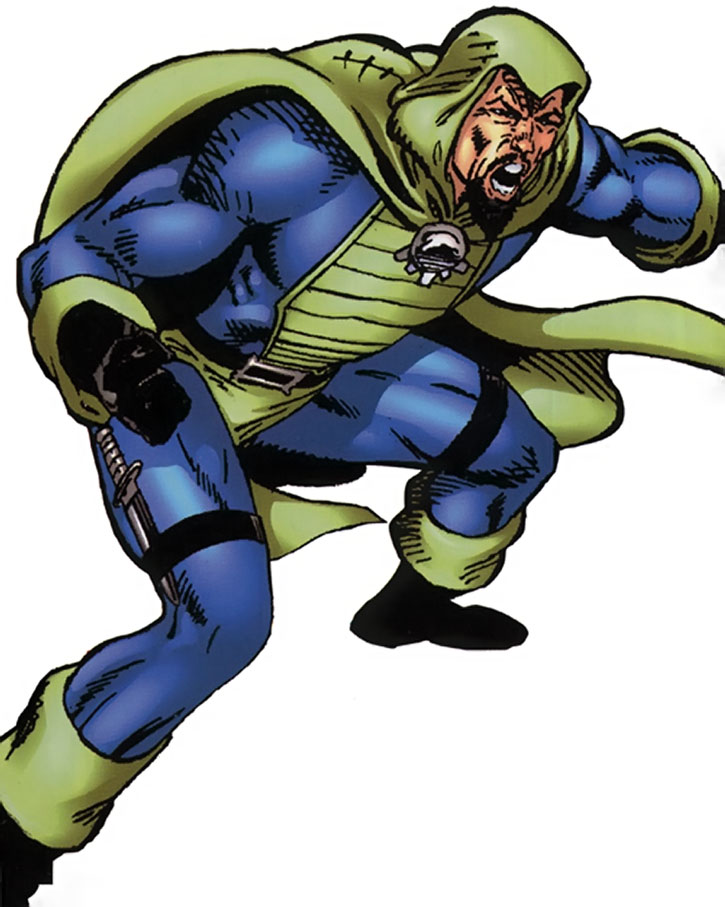 Cutthroat returned to Europe for a while. But he resurfaced in the US in 1991 after he was short-listed to be the next chief operative for the Red Skull, to replace Crossbones. The last test was simply a free-for-all fight between the three men left on the list – Cutthroat, Mangler and Death-Stroke.

Cutthroat, using all the dirty tricks he could think of, was the last man left if not standing, at least conscious.

The Red Skull paid for some private training by the Taskmaster. Cutthroat turned out to be an okay but not spectacular student. Despite this middling beginning, Cutthroat acted in an overconfident manner – he even started an affair with another associate of the Red Skull, Mother Night.

Soon, Crossbones came to the Skull’s Rocky Mountains base. He wanted his old position back. As a bargaining chip, he brought a prisoner – Diamondback, then Captain America’s lover. Cutthroat, overhearing Crossbones calling his prisoner “Ratsel”, was shocked to realise that Diamondback was his kid sister.

However, he wasn’t aware that the fully-masked Crossbones was Rumlow..

Shamed by the sight of his long-abandoned sister, Danny revealed his identity to her. He also decided to kill Crossbones for what he had done to her. He slipped into Crossbones’s bedroom to kill him in his sleep, but Crossbones woke up and killed Cutthroat.

The incident incensed the Red Skull. The rest of his enforcers reported that they had hurriedly buried Cutthroat in an isolated place, presumably in the Rockies.

As it turned out, Cutthroat wasn’t dead. It is possible that Blackwing or another Red Skull enforcer discovered that he was still alive but hid that fact to avoid further angering the Red Skull. Leighton ended up in the Raft prison.

During the mass breakout at the Raft, Cutthroat was one of the numerous escapees. He ended up joining the mob organised by the Hood. Leighton was but one of a large number of costumed criminals to do so.

Cutthroat is a case where the man left the street, but the street didn’t leave the man. Although he graduated to the semi-big leagues — well beyond what most criminals ever achieve — he’s still a street fighter and gang thug at heart.

He’s angry, somewhat ambitious and good with a blade, but doesn’t have much to offer beyond that. His impulse control is not the best. Though that also occasionally leads to spontaneous, surprising dirty tricks and low blows.

Leighton has fled from his actual responsibilities most of his life. He prefers cheating and violence when he has to deal with problems. While he loves his family, he never actually did anything for them after he ran.

(To Nightcrawler) “Cutthroat’s my name, goblin ! Murder’s my game !”

“This peak is private property. Trespassers will be executed.”

“Rache, I won’t let anything happen to you. Trust me. I’m not the lazy good-for-nothing you remember. I turned my life around and paid my dues. Sis, I’ve finally made it to the top of the profession. I made it ! I’m an honest-to-God super-villain !”

Cutthroat is a former elite fighter of the Kobra cult. He left after the failures of the Janus Directive . Leighton eventually joined the League of Assassins, wearing a variation on his old Kobra costume, though in different colours as a gesture of defiance.

Cutthroat was offended when Bane became the new Ubu for Ra’s al Ghul and tried to kill him. Bane easily disposed of Cutthroat’s corpse in the Egyptian desert, unknown and forgotten.

If you like the character, something found the body in the desert. As a result Leighton is now back as a free-willed, mummy-like undead, significantly more dangerous than before and wielding a pair of magical kopesh swords.

Perhaps he’s now a knight of Seth — a sort of evil Moon Knight — with one sword venomous like the serpent’s bite, and the other unclean like the jackal’s bite.

During his first appearance, Cutthroat had but 15 HPs to his name – and he wasted most of them on his initial shot. His main weapon was a rocket-launching pistol he hasn’t used since, with the following stats :

Micro-rocket heavy pistol [BODY 04, Ammo : 3×3, Telescopic vision: 02, R#03, Note : can switch at will between the three 3-rockets clips]. The clips carry the following, though he has to specific the load order : 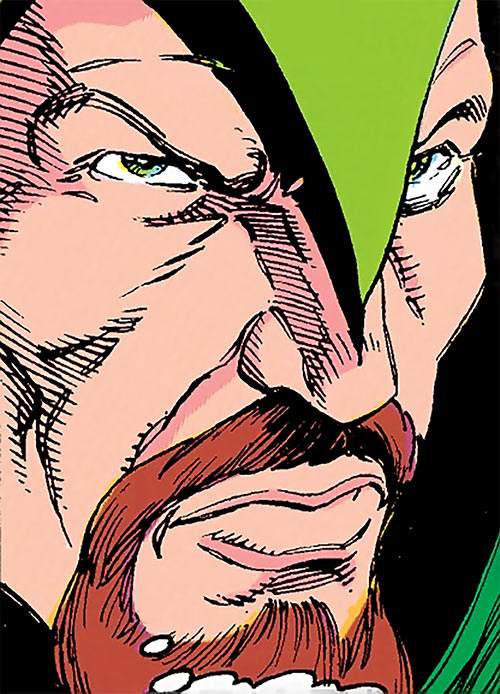 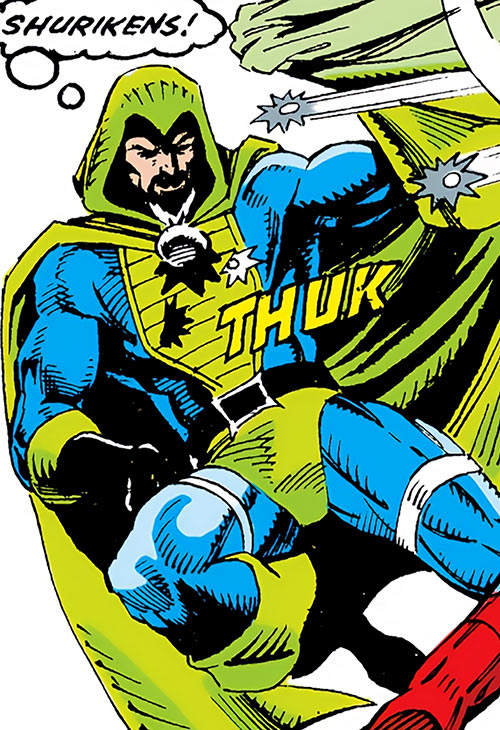 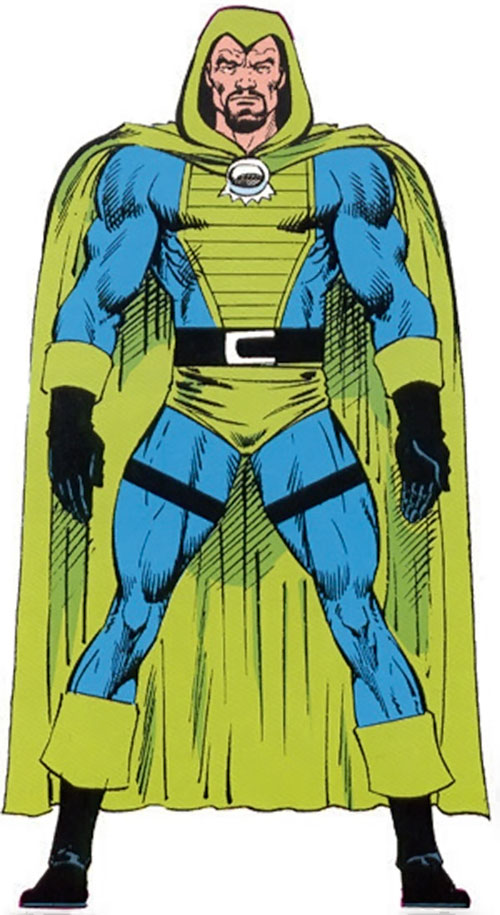 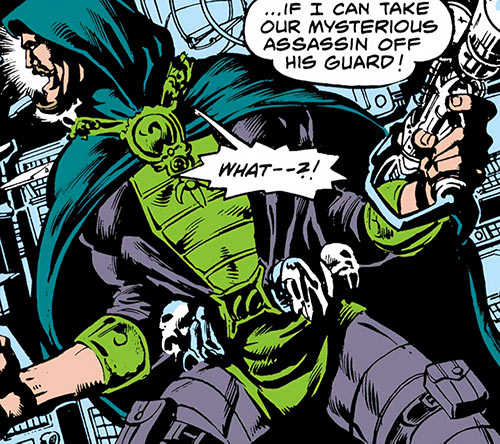