The Cyber-Warriors appeared in the 1992-95 run of Silver Sable and the Wild Pack. There isn’t much to say about them, but they can fill the “faceless yet fairly powerful goons” niche that is useful in games, but is seldom seen in other media.

The Cyber-Warriors are a type of powerful cyborg soldiers built by Harlan Ryker. He’s the Roxxon genius who developed groundbreaking cyborg technology from studying the original Deathlok cyborg. The basis is a lobotomised human soldier, formidably strengthened with robotics. Basically, they are robots build around some meat and a wiped-clean brain.

Cyber-warriors were mainly seen operating along with Ryker’s agents, Mainframe and Ben Jacobs. But some have also been sold as super-powerful mercenaries to a rogue HYDRA branch, the Genesis Coalition.

During a clash with Deathlok and Silver Sable, one Cyber-Warrior was hijacked by Deathlok III and injected with the consciousness of John Kelly. Kelly is the man whose body was used in constructing Deathlok III and whose consciousness had recently reemerged from Deathlok’s computer memory. The brutal soldier became known as Siege in his new body.

Bonuses and Limitations:
Density Increase is Always On (-1) and already factored in.

Drawbacks:
Creepy Appearance, Miscellaneous (The Cyber-warriors are lobotomized and not really sentient. They are generally considered to be Gadgets).

Even with their limited number of appearances, giving coherent stats to Cyber-Warriors is impossible. Depending on the panel, they were either very high-RV or only modestly resistant, stronger than Deathlok or unable to knock Crippler out with one punch, highly accurate or competing with Star Wars stormtroopers…

Much of the problem seems to be that they were supposed to be roughly on Deathlok’s level, yet did not slaughter the Wild Pack within Phases.

The Cyber-warrior body into which John Kelly was downloaded to become Siege was way more powerful than any other Cyber-Warrior. You may in fact want to have your Cyber-Warriors have different stats from each other, reflecting the work of Ryker as he learns and experiments. None is likely to approach the Siege cyborg, of course. 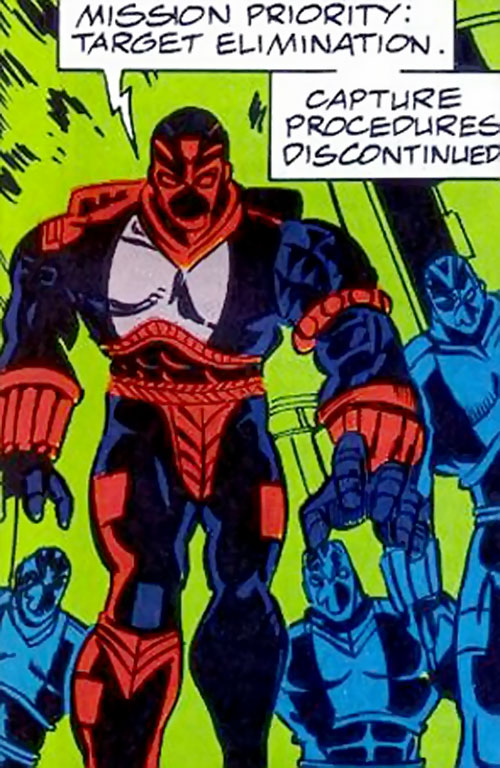