One of the memorable monsters from the 1990s landmark Doom video games.

See our profile for an unnamed marine for a lot more context.

As of this writing the 2016 version of the game has just been released, but this isn’t reflected in these stats yet.

These gargantuan cybernetic monstrosities can take more damage than any other hellspawn, withstanding up to 50 rockets before falling.

They can also return such favors in kind, firing up to three rockets at a time at the puny insects that would dare challenge them.

The Cyberdemons are not the highest leaders of Hell’s armies. They are too independent and headstrong to work well with other demons, thus providing little direction for the lesser hellspawn.

But they garner respect simply by being the most powerful and fearsome of the hellspawn. 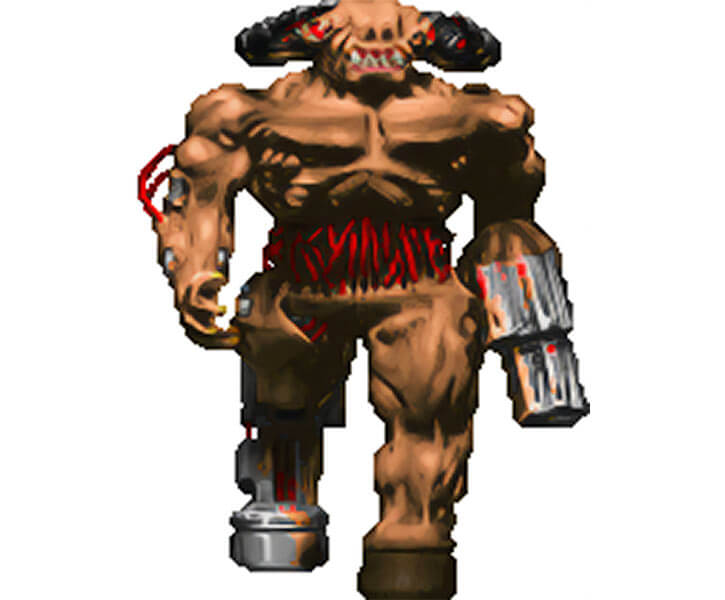 The Cyberdemons are the heavy artillery of the demon castes.

They are also entrusted with guarding critical locations against enemies of Hell.

Take a demon from a typical 1980s metal album cover, give him a partial borg conversion, then super size him.

Roars and stomps around.

Fires volleys of missiles at any living human it sees. 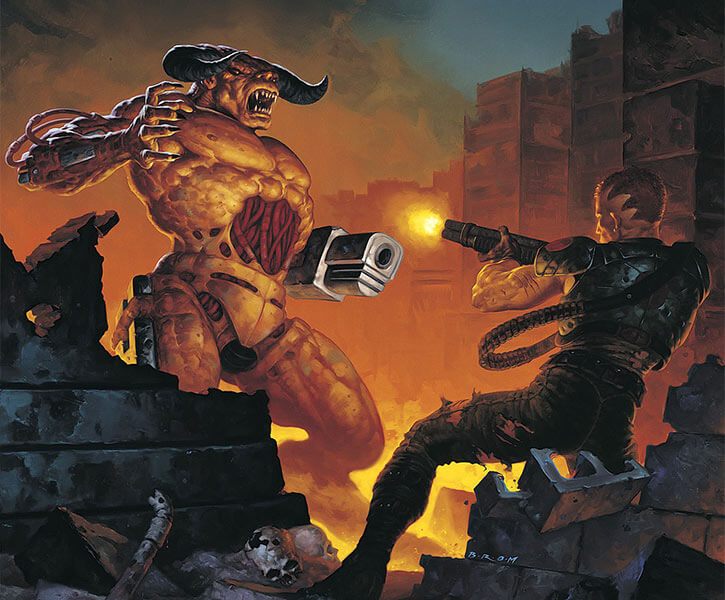 With the combination of Strange Appearance and use of the Force Character Interaction Maneuver (since a Cyberdemon’s STR will usually be higher that of the enemies he encounters, unless he is fighting superhumans), Intimidation checks will enjoy a -2CS to OV/RV, making Intimidation very powerful even at 8 APs.

Catastrophic Rage (if hit by an attack that is not another Cyberdemon’s rocket, will always attack the offending creature even if it is an ally), Miscellaneous (the footsteps of a moving Cyberdemon make a horrifically loud thumping noise that can be heard at quite a distance — characters trying to detect or locate a moving Cyberdemon get a -2CS Bonus to the OV/RV of the Perception Check), Strange Appearance.

Missiles (x3/unlimited – see description below for details) [BODY 04, Bomb: 12, Limitation: Bomb is reduced by 4 APs for every AP of distance between the initial point of explosion and the target; Range: 06, Grenade drawback, Dart Bonus (Can fire up to three missiles at a time)].

A Cyberdemon’s primary weapon is the rocket launcher that has replaced its right forearm. There is a seemingly endless supply of these missiles, perpetually generated by the Cyberdemon’s techno-magics.

However, the Cyberdemon can only generate up to three missiles at a time. After he fires those he must spend a turn “reloading” his launcher.

Alternatively (and more in keeping with the mechanics of the computer game), the impact of each missile can be resolved separately, with each of the first two CSs on the Action roll being replaced by an additional missile hitting the target and additional CSs being split evenly among the separate impacts.

For example, if the Cyberdemon fired three missiles and got one CS on the Action roll, the attack would not get a +1CS to EV but would instead would be resolved on the Result Table as two separate hits of Bomb: 12 (while the third missile flies past without hitting the target).

If the Cyberdemon fired two missiles and got four CSs on the Action roll, the attack would be resolved on the Result Table as two separate hits of Bomb: 12 with each hit getting a +1CS to EV.

The above missile rules are sufficient. But if you’d like a game mechanic for generating unlimited missiles (as I did, though I agreed with arguments that it is overly complicated for an NPC), add Fabricate: 25 with the following modifiers: Fabricate can only be used to create the missiles listed above; the OV/RV of the Fabricate roll is 14/14 (-3FC).

Fabricate can create up to three missiles at a time, using the Multi-Attack rules. For example, two missiles could be created at once with a +1CS to the OV/RV of the Fabricate roll (+2FC).

If you are using these rules the reload note can be ignored — the Cyberdemon spends a Phase generating new missiles via Fabricate rather than reloading.

That and the Intimidation APs are fleshing out that can’t be supported by the limited material. If you don’t like ’em just change ’em, that won’t contradict any research.

More Physical numbers seem set to reflect the status of 1990s cyberdemons as boss fights. Not the final boss of the game, but a boss encounter nevertheless.

The verbiage around Growth is a bit old, but I’ve kept it intact. Since the BODY scores is presumably computed with the low OV in mind, and the assumption of Critical Blow Manoeuvres. Which, incidentally, means that elite characters with high AVs will do much better against Cyberdemons than basic grunts.

Towering ● 9 point (Noticeable) ● Descriptor: Infernal physiology, demon
– 8 Ranks of Impervious for Stamina.
– Feature (a Cyberdemon is huge, but since it’s permanent it’s already worked into the scores).
– Unfriendly fire – Protection 4 (Limited 3 to rockets from other cyberdemons).

The WIL save and the PRE score are inherited from Mayfair assumptions about DC Heroes values for magical/demonic characters. It’s assumed, not demonstrated (obvs) in the game.

The Dodge and Toughness numbers assume that Doomguy defeats Cyberdemons by using Power Attacks (and Defensive Attacks). Any grunt can hit a towering Cyberdemon, but it takes a hero to hit the monster *right* and land telling blows.

The DCH stats have an emphasis on Intimidation effectiveness. For DCA I kept a single-digit score – rolls are more volatile, so it would become too likely that a Cyberdemon could Intimidate heroic figures.

The rockets-launching was also kept simple, since Roy was exploring some specific DCH modelling that’d be lost in the translation.