Cyberface has immense electro-magnetic abilities. These allow him to effortlessly manipulate huge amounts of technology (in DC Heroes RPG terms – Interface, Electro-Magnetic Pulse). He can assume control of any technological contraption no matter how advanced. He can bend any machine to his will as soon as it is turned on (Detect).

The reach of his powers is several miles (Radio Communications). Therefore, he can reshape active electronics to resemble his feature and do his bidding (Metal Manipulation). For instance he could remotely “assemble” and “pilot” an android, while safely in a bunker somewhere else.

By finessing his abilities he can also control the synapse activity in his opponent’s brains to take over their actions (Control), or to shut down their minds (Sleep).

He is also a formidable physical combatant. He possesses “Class 35” strength (STR) and near-invulnerability (BODY).

Cyberface is a capable engineer even without his powers (Gadgetry, Scientist). He is able to build fantastic gadgets (Genius), and it is quite possible that he has rebuilt himself into his current powered form (SL:Gadgetry). His masterpiece is probably the Overlord armor (Scholar).

He used to rent his skills to the highest bidder. But whenever he creates something to order, he incorporates secret backdoors so it cannot be sued against him(Security Systems). Another fail-safe would be to make such gadgets usable only by one particular person. For instance by making it attuned and controlled by that person’s brainwaves.

The city of Chicago has long been renowned for its organized crime, most famously during the infamous reign of Al Capone. The mobs and gangsters managed to retain power for decades.

However, the growing superhuman population threatened their rule by the early 1990s. Mafia crime lord, Antonio Seghetti, took measures. He had his second-in-command, Sebastian Khan, seek a technological answer to the freaks.

The mob had a healthy relationship with the small country of Lieberheim. Its ruthless dictator, Dread Knight, was given a prototype suit of armor and a legion of android soldiers, the Dreadheads. These served as proof of concept and debugging material.

With the success of the original armor, Khan improved upon his own designs. He created the nigh-invulnerable armor that would allow Seghetti to assume the role of OverLord. But from then on, the don was forced to remain within his suit. Else he would face certain death from the freaks he had subdued and recruited into his new organization, the Vicious Circle.

OverLord soon spent less and less time with his Mafia associates, as he maintained his new persona 24/7. Khan was thus abandoned, and left the mob to pursue other plans. At some unknown point, Khan gained superhuman powers to manipulate all technology. He took on the guise of CyberFace.

Gathering a number of other super-powered criminals, CyberFace formed the Annihilators. He prepared them to seize control of the Vicious Circle. Unfortunately for him, the Chicago Police Department’s Freak Force program interfered and apprehended him. The freaks also trapped the Annihilators in a dimensional limbo .

While in police custody, CyberFace was poisoned on the orders of OverLord and was presumed dead.

The Savage Dragon was desperate to get CyberFace back so that he could testify against OverLord. Khan was the only man able to identify the armored crime lord in his human guise. Dragon thus took the carcass to the governmental Project: Born Again program.

The villain was partially resurrected before the facility was destroyed. CyberFace wandered back to Chicago. There he was manipulated by Octopus, planning to use him to conquer the Vicious Circle. 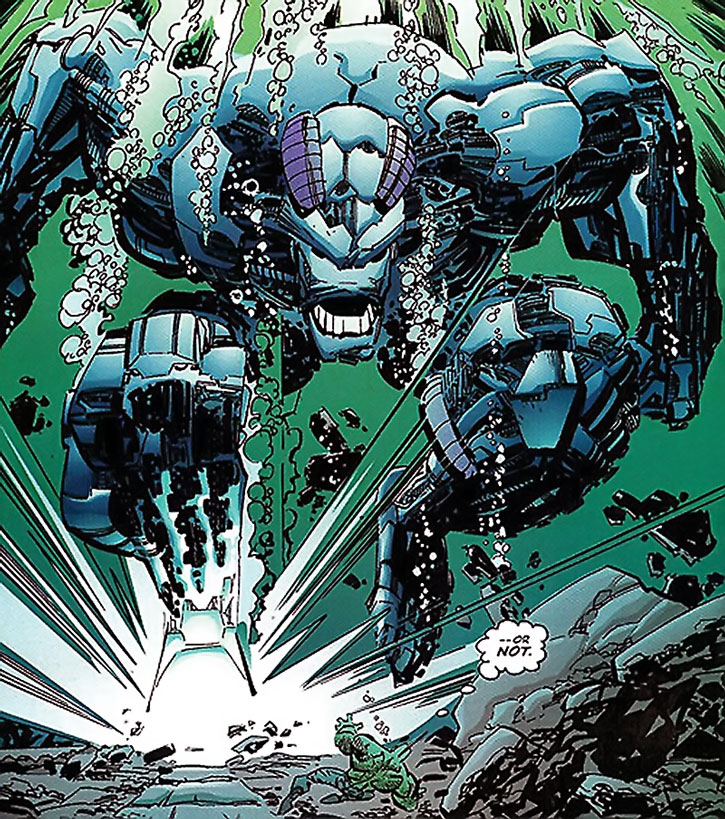 Octopus was later apprehended. CyberFace was cleared of any charges after providing evidence against OverLord so that a warrant for his arrest could be made. Shortly after, Horde took possession of CyberFace. Horde used Khan’s might to become the new leader of the Vicious Circle after the Dragon had killed OverLord.

Due to the incomplete resurrection, CyberFace slowly degenerated. But he was saved from death by Abner Cadaver, who infused him with the life essences of some of the Undead. Yet this life-force was very unstable. Thus, when CyberFace attempted to conquer Chicago in light of the Martian invasion, he was destroyed by a single punch from the Dragon.

Octopus, OpenFace and PowerHouse revived CyberFace in the gorilla body of BrainiApe. From there Khan stole the OverLord armor from the government as part of a bid to reclaim the Vicious Circle, now under the leadership of Horde. In a mass battle which killed Horde, the remains of CyberFace were finally destroyed by BrainiApe.

History took different turns on the alternate world known as the Savage World. In this new reality, CyberFace formed the Annihilators and took them to seize control of the Vicious Circle. CyberFace managed to successfully claim leadership away from OverLord, who he then killed.

From this point on, Khan’s sphere of influence continued to expand. The Vicious Circle soon became a serious force to be reckoned with.

When the Cosmic Cops invaded Earth in 1994, they destroyed much of New York City. The Cops looked set to expand their precincts over much of the planet. No heroes were able to get close enough to accomplish anything. Numerous teams were being monitored and threatened with death if they acted. It was only when CyberFace entered the fray that the aliens were defeated.

The Cosmic Cops’ impressive technology was enslaved by CyberFace. Khan then used it to destroy the invaders and convert them into his mindless cybernetic slaves. New York City was the next city behind Chicago to become controlled by CyberFace and his powerbase increased immensely. Few could oppose him now that he had the enhanced technology of the Cosmic Cops.

King of the World!

Three years later the Martians launched their mammoth invasion of Earth and destroyed much of the planet. But CyberFace again came to humanity’s rescue, albeit to serve his own selfish gains. CyberFace defeated these latest aggressors and added their technology to his. Thus, he was able to seize complete control of Earth and became the King of the World.

Only one person had the audacity to truly oppose CyberFace, and that was Dragon. A failed assassination attempt earned him the unenviable position of public enemy number one, with a huge bounty on his head.

In May of 1999, the original Dragon’s mind took control of this alternate timeline  Dragon’s body. From there he launched his own quest to depose CyberFace from power.

Over the next few years, Dragon gathered a resistance movement. It consisted of abandoned Vicious Circle members, the Underground Freaks and other freedom fighters. Dragon led an assault upon the White House. CyberFace fled to Vanguard’s starship, but was unable to hide from his arch-enemy.

Dragon confronted Khan, leading him to the isolation booth that once housed Simon Kane, the Possessor. This neutralized his powers and allowed the hero to free Vanguard. From there the heroes gassed CyberFace, leaving him locked away in case his incredible abilities were needed to save the Earth in the future.

But Cyberface could still access his remote units under his control. Cyberface had one such unit shoot him dead so he wouldn’t be enslaved.

Cyberface is a large, muscular techno-organic entity. As such, he’s made of both organic materials and metallic chips.

He wears black spandex below his belt and yellow spandex above it. All over his body are purple strips of metal. These strips are visible and protrude out a bit from his stomach, the throat and neck, the back of his head, the ribs, the fingers, the joints, the biceps and triceps and the Achilles’ tendon.

He wears five similar purple pieces framing his face, giving him his signature visuals. This picture is completed by his long, brown hair, a metal-colored belt and huge, metallic shoulder pads.

Cyberface is a ruthless man, intent on taking over the world at any cost. The loss of millions of civilian lives and most infrastructure and civilization is an acceptable cost. Only he is powerful and deserving enough to control the world.

Therefore, CyberFace will protect the world against alien invaders and other would-be conquerors. But only so that he can then step in as the savior to take over the weakened leadership.

Cyberface is also a cunning man, and a capable strategist and tactician. Naturally, such a driven person is also prone to overconfidence. Yet he realizes the strength of a powerful group of henchmen to do his bidding. Thus, he is practical enough to attempt to find another option should he get the opportunity to destroy both his enemies and his henchmen in one blow.

Although he started out as the competent second-in-command of the Vicious Circle it was only a temporary position. Cyberface planned all along to take over the leadership as soon as his plans were all set and enacted.

He will, in fact, have several parallel plans and even some backup plans. This enabled him to know the Vicious Circle organization inside and out, how to take out the current leader Overlord, and, in addition, to be an accepted reserve leader. This is also how he founded his own group of villains, the Annihilators, to prepare the way for his ultimate goals.

Cyberface does not take lightly to being opposed. He will hunt down an opponent personally or through henchmen all around the world until they are destroyed. He sees only the Dragon as a worthy foe and will put in all available resources against him, including the full Vicious Circle roster and an armada of alien spaceships.

He likes to personally and physically attack his foes as well, and enjoys morale-breaking taunting in combat.

“Chicago belongs to the Vicious Circle ! Our takeover here is but a first step — Chicago is but the first to fall — the ultimate demise of civilization as you knew it will soon follow ! The Vicious Circle is triumphant !”

“Arrogant freak — do you really think you stand a chance ? My power is three times what it was when last we met. There are a thousand ways I could kill you.”

“I know you can hear me, Dragon — I’m being broadcast on every television in every country and you couldn’t have gotten far. Your life for theirs, Dragon — there are no other options !”

“The traitor is dead. Let this be a lesson to all of you, my will is not to be challenged ! My power is absolute ! Obey or die !”

“They think I am bested ? What insolence. What unmitigated gall. Have they no common sense ? No grasp of reality ? I can command any mechanical contrivance to do my bidding — every computer — every toaster oven is mine to command and reshape and utilize. There is no limit to the weapons at my disposal. They cannot begin to grasp the impossibility of that which they seek to accomplish. They cannot begin to fathom the power which I alone wield. Power beyond mortal comprehension. This planet Earth is mine.”

Cyberface could be inserted as he is to lead a new Vicious Circle that includes Metallo, Kilg%re, Shrapnel, the Construct, the Cyborg Superman and others, all of whom have powers similar to his, as his lieutenants.

Cyberface himself could be enhanced by Kryptonian or Coluan technology. This mighty legion would be a match for the Justice League.

Notes:
While he was the King of the world, Cyberface enhanced his powers using both the technology of the Space Cops and the Martians, resulting in an increase of all of his Powers by 8 APs and his Physical stats by 3 APs.

Helper(s): KalEl el Vigilante, Frank Murdock. Some of the texts are backups from the defunct www.thebrotherhoodofthefin.net. 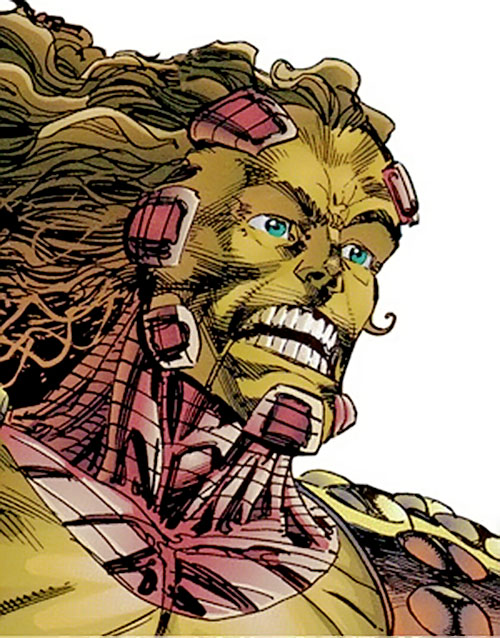 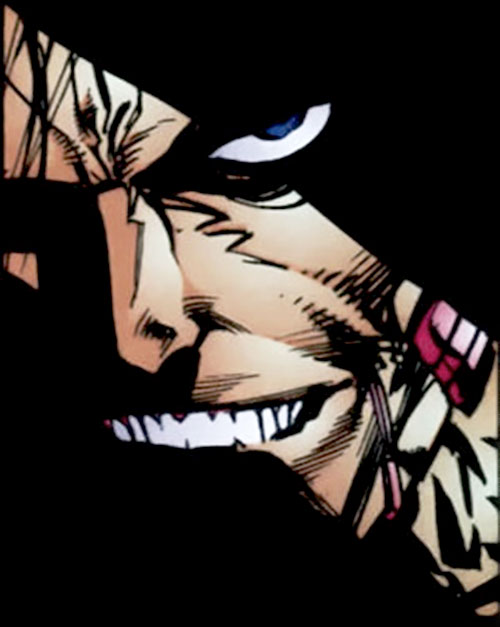 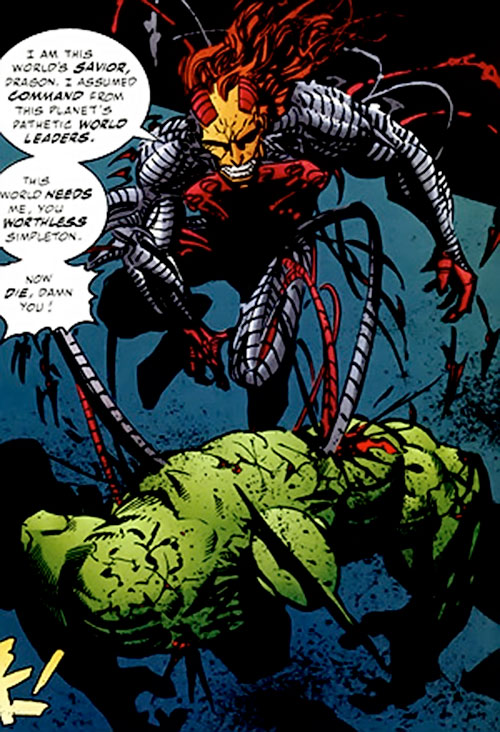 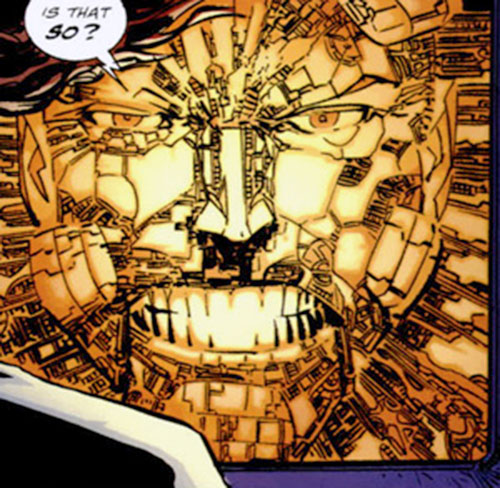 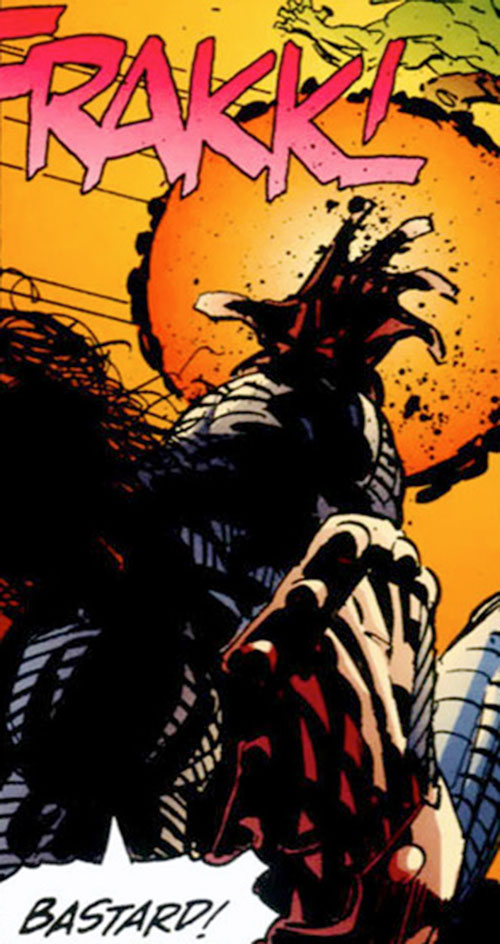