Cyborgirl is a minor DC Comics baddie, who first appeared in 2002. She chiefly clashed with Wonder Woman (Diana of Themyscira) and Cyborg (Victor Stone).

For more context, you should refer to our Villainy, Inc. team profile.

Cyborgirl was rebuilt using techniques and technologies similar to the ones used to rebuild Victor Stone. The tech is more recent than the one used for Stone. Howbeit, Charles isn’t as powerful as Cyborg, who went through several major upgrades during his life as an half-artificial man.

Cyborgirl apparently “only” received replacements for :

Thus she doesn’t have enough metal in her to be vulnerable to magnetic effects, though that’s probably less true if her arm or skull are specifically targeted.

Cyborgirl’s main weapon is her fully cybernetic right arm. She can use it to punch or grip with superhuman strength. But she also can morph  her hand into the barrel of a powerful white sound generator packing the punch of a cannon.

Her hands can morph into other configurations. For instance it once became ten tentacle-like computer connectors for a technology she just came into contact with.

Charles also has an array of sensors that do :

Lastly Cyborgirl has “computepathic” abilities. Her brain can communicate with all sorts of computers, even unusual ones such as ancient Atlantean tech. However… the interface goes both ways.

Young and fashionable, the hard-clubbing LeTonya Charles was also severely addicted to a number of illegal drugs. At first she did the usual clubbing drugs. But in her quest for stronger sensations she started doing Tar.

Though it gave her superhuman strength and the ability to do unforgettable things, the aftereffects of Tar destroyed her body. Large chunks of her organism, even an entire limb, ended up beyond the capabilities of conventional medical care to fix.

Her aunt Sarah Charles, a physical trainer and genius-level researcher at S.T.A.R. Labs, saved LeTonya. She did so using technology derived from the cybernetic systems invented by Silas Stone. However, becoming a cyborg made LeTonya antisocial, and she fled to become a criminal.

She later chose or received the name “Cyborgirl”.

It was later revealed that LeTonya Charles’ reconstruction was part of a secret S.T.A.R. project called Project M. Sarah Charles and her future husband Deshaun were covertly the star engineers of this initiative.

M was about using Stone’s cybernetic technology as a basis for a military project. Though their liaison, Mr. Orr, said that it was to help veterans who had lost limbs and organs, the goal was actually to explore enhancements to rebuild crippled soldiers into better killers.

Another subject who underwent reconstruction was Ron Evers, a childhood friend of Cyborg who was mangled during an attempted terrorist strike and became a key agent for Orr. Two non-human creatures — the cyborg Wildebeest, and Equus — were also enhanced using Project M tech, though they were not related to the main project.

In the early 2000s, a squad of disabled veterans from the Iraq occupation was equipped by Sarah and Deshaun with Project M technology and redeployed as a Special Ops squad called the Phantom Limbs.

Cyborgirl had already left the program at that point, and presumably managed to escape all attempts at retrieving her.

Cyborgirl’s first documented appearance was with Villainy, Inc. during their 2002 invasion of Skartaris . Charles’s ranged firepower was a considerable asset. Among other feats she blew open the doors to Shamballah.

Queen Clea, the leader of Villainy, Inc. had also recruited LeTonya since Cyborgirl could interface with ancient Atlantean computers. Indeed, they found such mainframes under Shamballah.

However, after several hours of interfacing, Cyborgirl got lost within the cyberspace and Trinity, a treasonous Villainy Incorporated member, took over her mind and the computer systems. Doctor Poison II, Trevor Barnes and Wonder Woman narrowly freed Cyborgirl and foiled Trinity’s plan.

Charles and most other Villainy Incorporated members were then captured. The Sorceress Supreme of Skartaris shrunk them to about two inches so they could easily be carried to Themyscira’s prisons.

During the trip home, Cyborgirl became fed up with her colleagues. A time travel mistake led to Nazis and dinosaurs, but Cyborgirl ended up helping Trevor Barnes against the Nazis. Unlike her colleagues she just wanted to go home and be restored to her normal size.

Cyborgirl either escaped or was set free, and was back in the US by 2008.

At that point, a new version of the Suicide Squad was disappearing numerous villains all across the country. Cyborgirl associated with a small team of super-villains trying to avoid this fate, led by the Key. Narrowly escaping a Suicide Squad sweep, the Key’s team sought sanctuary with the Justice League.

Exhausted, they let themselves be imprisoned by the JLA. This gambit paid off when the JLA repulsed a Squad attack then exposed the vast governmental operation. The Justice Society established that the Squad was exiling the super-criminals to an alien planet.

Cyborgirl was later recruited by Libra to join the Society. Yet she did not play a documented role during the Final Crisis  – presumably she was just a footsoldier. She was imprisoned, likely after the Society was defeated during the final battle.

Mr. Orr of Project M soon approached her again while she was in prison. He offered her to join the “Cyborg Revenge Squad”. This was a sort of smaller version of the Suicide Squad assembled to prevent Victor Stone from taking Project M down. Though she was wary and unconvinced, Charles joined.

However, Cyborg defeated the Revenge Squad in Iraq and put an end to Project M. Sarah Charles and her new husband left S.T.A.R.. As to Cyborgirl, she hasn’t been seen since.

Charles’s life is just a haphazard mudslide over which she has relatively little control due to her own failures. The only thing she can do is blindly rush forward lest her past and current excesses, mistakes and self-indulgences catch up with her. She bribes, she steals, she plunders – and she’s still out for a rush.

She seems to be constantly jonesing for Tar. But the physical component of the addiction has been removed, leaving her with just the psychological craving. But she is well aware that actually doing Tar would literally tear her apart.

Much like Victor Stone, being part-machine is something she hates. She resents the people who saved her life but turned her into this.

Bonuses and Limitations:
Scientist is Contingent upon Telepathy.

The Omni-Arm is a tad on the generous side, but we see her morphing her arm and fingers as needed, and her cyber-arm is superhumanly strong, so… it’s not that much of a stretch. 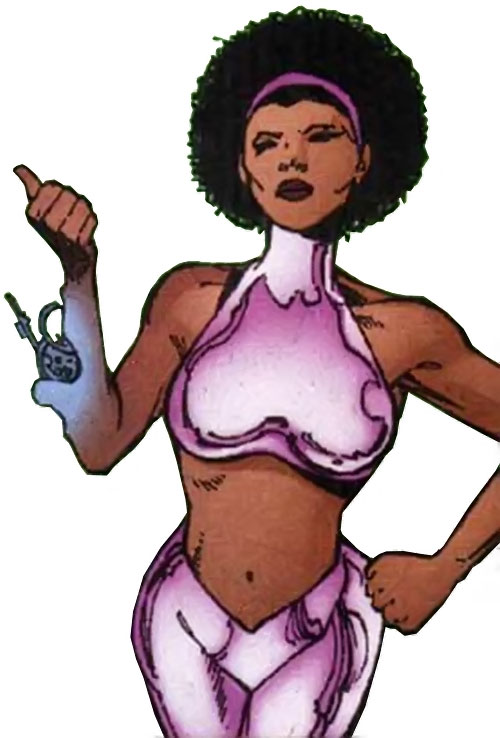 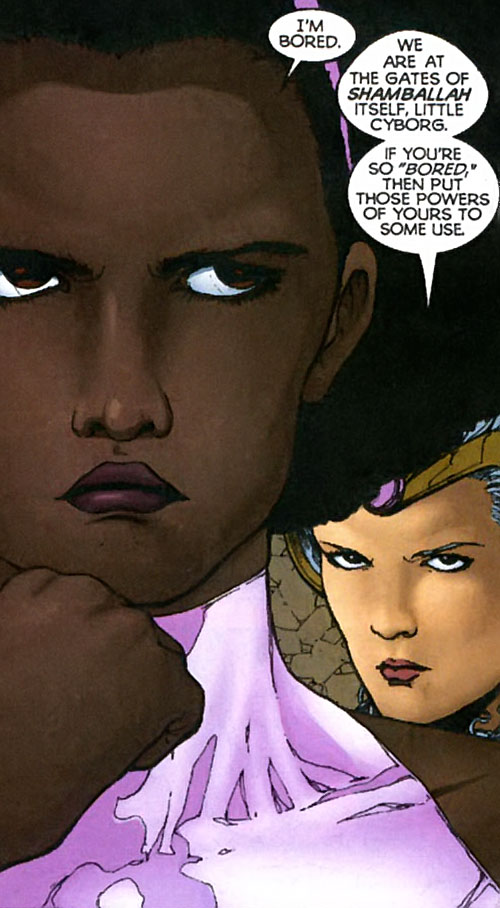 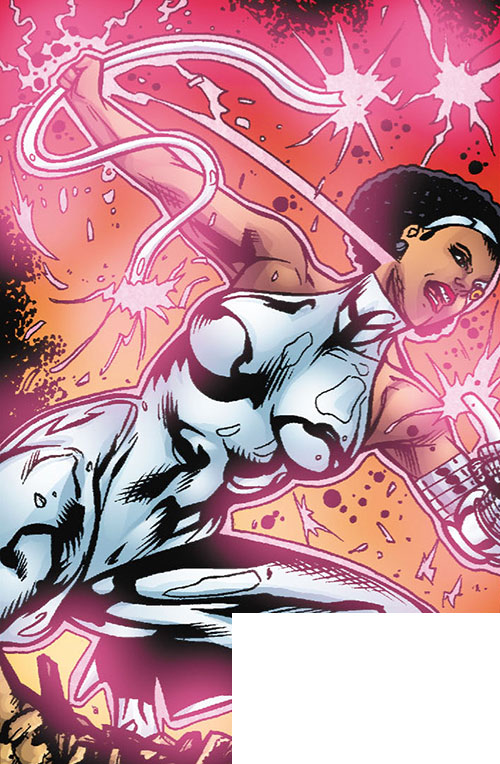