Cyclone acts as the Challenger’s pilot, his cybernetic enhanced reflexes make him an intense precise driving machine. His hyper reflexes allow him to react much faster than humanly possible.

As his name implies, Cyclone may detect, analyze, produce, and control winds. His arms and legs can produce high pressure air streams powerful enough to blast through concrete. Cyclone can produce air currents around his body allowing him to fly at great speeds.

Cyclone is fairly durable though small arms fire could damage him until recently stronger plating was added covering most of his body. Further upgrades are likely to come.

Cyclone’s past has been unraveled slowly as the story progressed. He awoke to find himself in a storage unit in Florida having no recollection of his past.

Cyclone began almost instinctively going forth and helping people wherever he could. He’d fly in at great speed to prevent an accident then speed away again.

After about a month of this, stories began appearing in the news. He was tracked down by Blitzkrieg who offered him membership with the Challengers and protection from a brewing media circus. Cyclone accepted without protest.

As it turns out, Cyclone is actually racing legend Chris Anderson. Anderson had died some years ago in a fiery on-track crash. He’d been raced to a nearby hospital where he was pronounced DOA. Apparently, that was not the case.

Now that Cyclone is part of the Challengers his new friends are taking up the challenge of finding out what actually happened to him.

Cyclone wears a blue and gold costume, including a long blue cape with gold trim. A cape is traditional for a hero in Cyclone’s mind. Cyclone’s face was completely covered by a helmet and silver face plate.

He looks something like a member of a riot squad but dressed in blue and yellow instead of black.

Cyclone stands straight and rigid like a soldier. He speaks in an apologetic manner, joking first but when that fails to earn friends he’ll become timid. When there’s something to be done, Cyclone excitedly jumps into action.

The voices he used early on were famous TV actors. He did not discriminate when it came to selecting actors by gender.

At this point, Cyclone is friendly to all; taking any comment as praise or correction almost robot like. Though his old personality seems to be very deep inside him, sometimes his old swagger flares to the surface unexpectedly.

Acid: “Could you quit sounding like Bob Barker for crying out loud ? You’re driving me crazy !”
Cyclone: “I am sorry. I only have a few voices to select from.” (whispering in Marilyn Monroe’s voice.)

Since his background isn’t completely revealed at this point. Here a few guesses at an origin story. Cyclone’s body could have originated through T.O. Morrow’s work similar to the Red Tornado.

Perhaps at some point he would become the unwilling pawn in a plot to destroy the Challengers!

So, why wasn’t Cyclone given a computer voice right away? Well, we don’t know his past or who really built him. Perhaps he was built by aliens, or air elementals, or some other non-human intelligent who didn’t truly understand our language.

Then again, who would fit the bill of a reclusive eccentric scientist who is known for his love of old TV?

HA! I went to Google and typed in “reclusive eccentric scientist” and Howard Hughes comes up. He loved aircraft too which leans towards Cyclone’s air abilities. He has a Medical Institute too. But he died in 1976.

Perhaps it’s a relative of his that put racing legend Chris Anderson back together. This relative would be wealthy because of Howard’s wealth and into medicine as well as the technology. We could make this person whatever we want.

I added “comic” to the end of the internet search and Howard Hughes was still the first in the list. It refers to the comic character “Doc Savage” who wasn’t a comic character first. But his adventures have been shown in DC, Marvel, and other comics.

Drawbacks:
Power Loss: If Reliability # rises all powers except Skin Armor drop by an amount equal to the R# gain, Secret Identity, Miscellaneous: No memory of his past or how he became a cyborg, Miscellaneous: Cyclone has no real voice of his own anymore, only the recordings.

Cyclone’s body armor (Skin Armor) was added by Acid, another member of the Challengers, after damage from a machine gun blast caused Cyclone to shut down suddenly.

As a world class race car driver Cyclone had an impressive 08 APs of Vehicles (Land) before he was modified with cybernetics. His Wealth was at 10 APs.

Cyclone possesses both a human brain and integrated computer circuitry that makes him vulnerable both to attacks that affect the mind and those specifically effective against computers.

Cyclone is NOT immune to disease, poison (Poison Touch), and attacks that induce sleep. Cyclone does need food (though not nearly as much as a standard human as he is essentially only a brain) and sleep, his mechanical parts need a recharge too and ages conventionally.

He also needs to breathe and with limited Sealed Systems, assume he can last about as long as a normal human without air; could be in big trouble if he found himself submerged.

Cyclone can fly but I removed the flight power (contingent on Air Control) since Air Control already allows a character to propel themselves through the air. 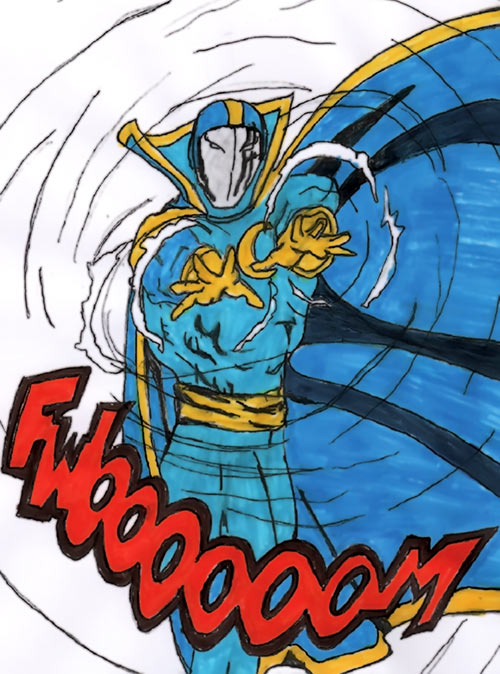