Cyclone (André Gérard) is a minor Spider-Man villain. He appeared in 1975 and only showed up a few times.

However, the name and powers are simple and effective. Which led to other Cyclone characters, some with loose connections to the original.

The Cyclone designed, built and learned to use a suit that allows him to control the very air. 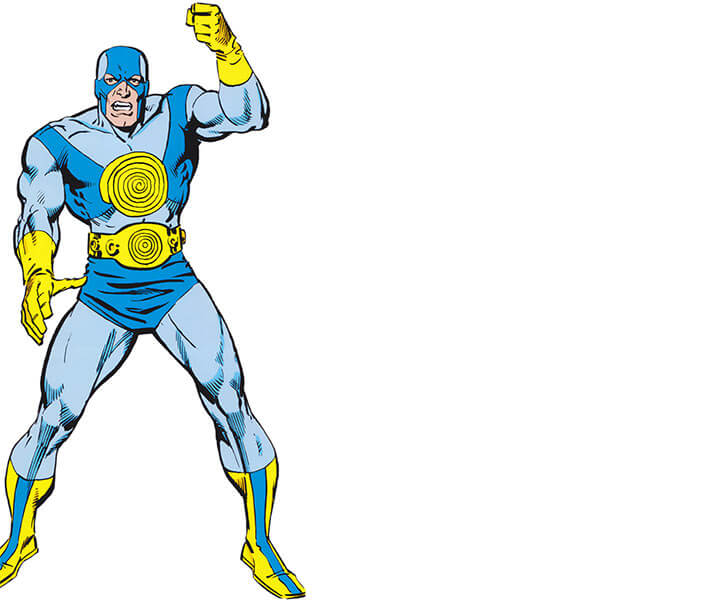 Other characteristics of the suit

However, the suit is particularly vulnerable to strong, countervailing winds. These will quickly make the air currents weak and incoherent. One large (300 pounds (140Kg) or so) industrial ventilator was sufficient to achieve this, at least in 1975.

Furthermore, the suit’s winds aren’t selective. If there are allies in the vicinity, they’ll be affected as well.

Curiously, the suit didn’t seem to protect much against cold – or airborne particles. If he loses his balance and falls out of his tornado’s eye, that’s a problem.

The suit may be padded. The Cyclone could take two punches from Spider-Man. Though obviously Spidey pulls his blows, the Cyclone still fared better than his henchmen durability-wise.

Gérard seems to be in good shape, and may have some hand-to-hand combat training.

A Frenchman of his generation also likely spent 16 months with the military.

In Paris, Mr. Gérard was assisted by three costumed, bilingual henchmen. Use the generic beefy thug stats. In Paris they operated without weapons, in New York City they were armed with typical Maggia guns. 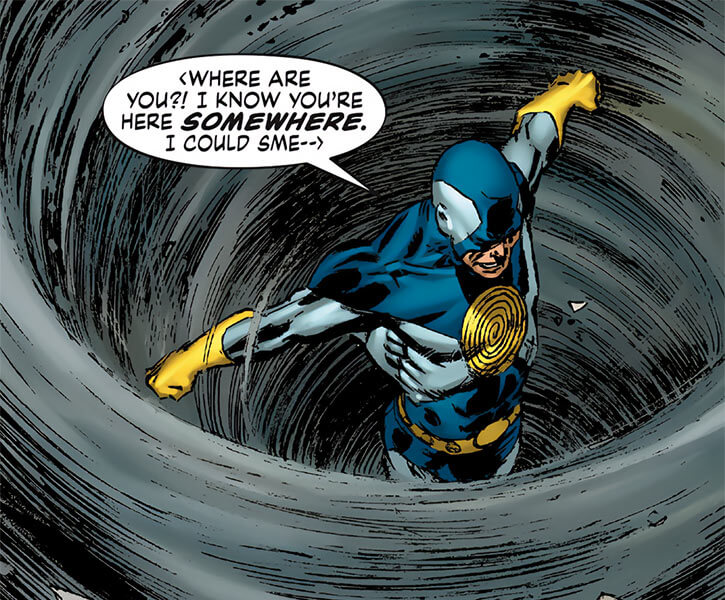 Mr. Gérard was a French engineer working for N.A.T.O.. His big breakthrough was cyclonic weaponry.

However, he was told that “exotic weaponry” was only procured from American arms manufacturers. His prototype was rejected.

Since Gérard was then promptly fired, one suspects that N.A.T.O. already had reasons to doubt his competence or reliability. If so, they were wrong about one thing – the cyclonic weapon system worked great.

Since it was a Tuesday, Mr. Gérard became a vengeful, costumed super-villain.

Robertson complied, but brought photographer Peter Parker with him.

Soon, the amazing Spider-Man was interfering with the Cyclone’s plot. He eventually prevailed by using a huge fan to create a counter-vortex.

The Cyclone spent but one or two years in prison.

(A caption says one year. But two years is a possibility when working using publication dates rather than sliding time.)

During that time, the Maggia launched a wave of recruitment, looking for enforcers with super-powers or great skills.

They got Gérard out of prison, and put him to work in the US.

The mob now had a new leader – the Masked Marauder (Frank Farnum) was the new Big M. Having men like Cyclone work for him revitalised the Maggia, but then came the super-hero response.

One such responder was Moon Knight (Marc Spector), who kept attacking Maggia made men.

A misunderstanding led to brawling against Spider-Man (Peter Parker) instead. That gave the Maggia thugs time to phone for reinforcements.

The Cyclone thus came in, and seemingly slew both his opponents. Then murdered the Maggia enforcer who had called, for causing a security breach.

However, both Spidey and the Knight discreetly survived.

The pair attacked again during the Maggia meeting. In the enclosed space, Cyclone’s powers mostly harmed his allies. He was soon taken down using a freeze capsule, dropped down the eye of his tornado.

Big M, who had been covertly observing the fight, wasn’t impressed.

The Cyclone presumably fled before the Maggia would murder him.

He reportedly started a new, low-profile criminal career in the American Midwest, away from most super-heroes.

However, by 1986 he grew concerned over the number of mediocre super-criminals like himself who had been slain by the Scourge of the Underworld. He therefore agreed to attend a meeting, to organise against this threat.

It was a trap. The Cyclone and many others were gunned down by a Scourge. 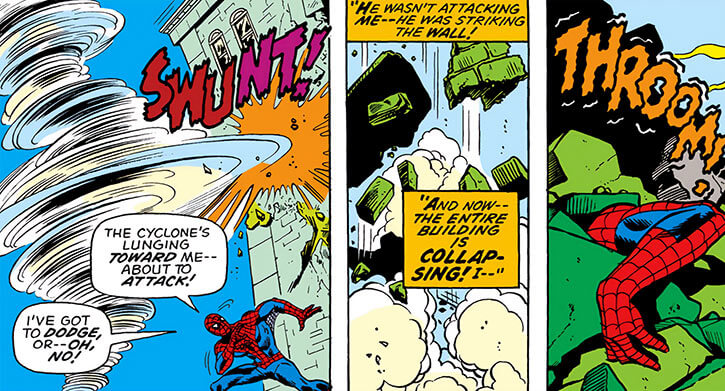 There would be at least three men who used variants of André Gérard’s Cyclone suit :

In 1998, Cyclone was among the “husks” animated by Arnim Zola. Husks are a sort of weak, undead clone based on cells from a corpse.

These husks were destroyed by Deadpool.

In 2008, one Skrull impersonated André Gérard.

Apparently there had been an intelligence failure. The Skrulls thought a/ that Gérard was still alive and b/ that he had once fought Captain Marvel (Mar-Vell).

The Cyclone impostor’s terror attack on the Louvre museum  killed a number of hapless tourists. It did draw Captain Marvel in, but : 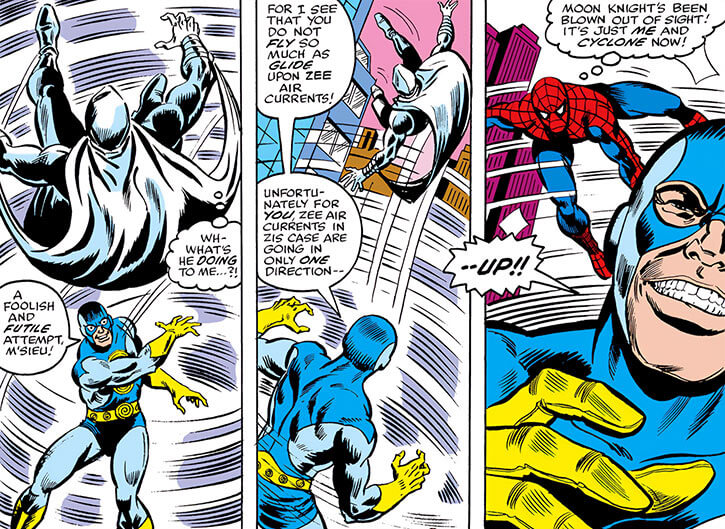 In 2009, the Hood (Parker Robbins) conducted an occult ceremony using Dormammu magic. He resurrected a number of criminals slain by the Scourge of the Underworld, including André Gérard.

He then falsely told them that the Scourge and the Punisher (Frank Castle) were the same person. And that the resurrectees would die anew if they didn’t kill the Punisher within 30 days.

(This may also have been a lie).

After his resurrection, Cyclone was fairly passive. He mostly socialised with other jobbersWrestling slang for a wrestler who almost always loses such as Mirage (Desmond Charne), Mind-Wave or Firebrand (Gary Gilbert).

This lasted until Lascivious (Davida DeVito) and Letha (Hellen Feliciano) forced them into action.

This group attempted to kill the Punisher while disguised as 1980s Avengers. Cyclone seems to have been the one impersonating Thor (Thor Odinson), thanks to Mirage’s illusions.

But the attack failed, and Cyclone’s face was badly wounded by the Punisher’s spiked brass knuckles.

His mug heavily bandaged, Gérard was present when the Hood made the Punisher an offer about resurrecting his family. However, Castle unexpectedly turned and used the blood sacrifice dagger to slash through Cyclone’s throat, likely slaying him.

The Cyclone once was written as having a caricatural French accent. In the original appearance, he had zero accent and a superior diction.

After his resurrection, he spoke like any of his fellow jobbers.

He’s clearly overconfident. He might do things like attempt to punch his opponents rather than use his wind powers, or refuse to believe any counter-measure could possibly overcome his cyclone.

He’ll also be slow to admit that a tactic he’s using is garbage.

Gérard monomaniacallyObsessively despises Americans. He will constantly cite or make up reasons why Americans are totally the worst.

After his resurrection by the Hood, the Cyclone seemed disoriented. In particular, he was among those resurrectees who felt intimidated by how much the world had changed. 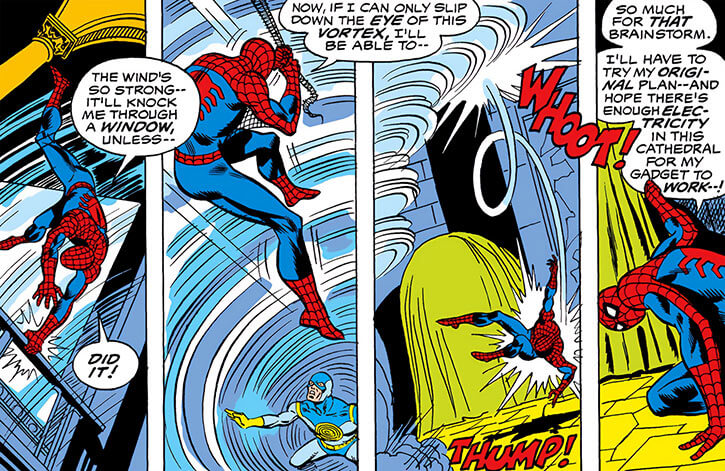 “You Americans ! You can never keep from interfering in matters which do not concern you ! If it is not politics, it is war. And if it is not war — it is *crime !” (I’d imagine that Gérard was referring to the Việt Nam invasion — Ed.).

“Oui, mon ennemi – AGAIN ! I control the force of a hundred cyclones, the power of the mightiest vortex — and I shall DESTROY YOU ! For the second time you have chosen to interfere with matters that are not your concern. THIS TIME WILL BE YOUR LAST ! THIS TIME YOU WILL DIE !”

In the DCU, the Cyclone was part of a secret NATO group that received from anonymous sources a Red Tornado android body.

Gérard was the first to decipher its secrets. He used them to build his Cyclone suit and destroy all evidence and work about the android.

He fought the Blue Beetle and Booster Gold twice.

During Underworld Unleashed  , he gained mastery over “demon winds”. But these ultimately made him vanish by dragging him screaming into Hell.

He was freed during the Day of Judgement  , and lost a fight with the Blue Devil.

Accuracy doesn’t apply when creating a vacuum – he has to use his DEX.

Vehicles and Weaponry are inferred, not demonstrated.

See the Air Control section in our New Powers article. The addendum about vortices was developed as part of writing the Cyclone up.

Post-resurrection, the Cyclone’s powers may have been even more lethal and ruthless. It’s one of those times where the writer seemed to have plans to use these characters long-term, but things were destructively wrapped up within just a few issues.