In Marvel Universe stories, they somehow speak modern English – even after centuries in suspended hibernation.

“Lesser” Cyclops are IIRC the descendants of of the original three sons of Gaea and Uranus (Teropes, Argos and Brontes), who forged Zeus’ thunderbolts, rose along with him against Cronus and later went to work in Hephaestus’s forges as his star smiths.

The best-known lesser cyclops is of course Polyphemus, who opposed Odysseus. In fact, if we postulate that those immortal creatures can somehow slowly regrow organs, one or all of the appearances in the Marvel Universe could be Polyphemus !

There is no account of the lineage of the lesser Cyclops except that Polyphemus was the son of Poseidon and nymph Thoosa.

Polyphemus was represented as the strongest cyclops on Thrinacia and Homer took special pains to portray him as being of giant size which is something he didn’t do of the cyclops in general. (Virgil corrected that by comparing them to a race of giant trees.)

Homer also took the time to specifically mention that Polyphemus was a one eyed cyclops. Although he didn’t mention any of the cyclops as having more than one eye, that is still somewhat strange. It’s like mentioning your dog is a four-legged quadruped.

There were two races of lesser cyclops. One was renowned for skill at metalcraft and served Hephaestus in his forge.

The other were insolent and lawless cannibals. They had no agriculture and relied on wild wheat, barley, and grapes to supplement their herds. They had no laws or political or social institutions. Each male dwelt separately in his cave with his wives and children and governed them as absolute ruler. They were the epitome of uncivilized savages to the Greeks.

We do know that the three greater cyclops, Brontes “thunder”; Steropes “lightning”; and Arges “rapid”, were the sons of Uranus and Gaea and were Titans in every way except for the single eye in the middle of their forhead. They later forged Zeus’ thunderbolt, Hades’ helmet of invisibility, and Poseidon’s trident.

Upset over Zeus frying his son Asclepius with a thunderbolt for bringing a dead patient back to life, Apollo killed either the three greater cyclops or their children. That makes them unlikely to be the parents of the lesser cyclops. And we’ve already seen that other dieties can spawn them. It’s like inbreeding among aristocratic families of Europe.

In addition to Jay’s excellent summation of Cyclopan lore, I can add little. However, from a DCU history viewpoint, I’ll just mention that Polyphemus, still blinded, was encountered by Wonder Woman during the Challenge of the Gods, where she was sent beyond Doom’s Doorway to encounter the monsters within.

Polyphemus was found starving because, blind, he couldn’t hunt effectively, but immortal, he could not die. He could, it turned out, be *killed*, and was.

Well, since we are going into the details… ”Cyclops” means, as you prolly know, “circled eye”. It was presumably based on a “guild” of smiths wearing such a tattoo/mark as a symbol of their profession in some town in or near Greece.

Thus a huge man with a circled eye on his brow is the natural derivation, and soon you end up with one-eyed giants under a volcano. But tales about triclops, or biclops with a tattoo, are likely to stay around along with the standard monoclops :-).

Actually it’s thought to have come from finds of mastodon skulls  whose large sinus cavity looked to primitive humans like a massive circular eye socket in the middle of the forehead.

During Classical times, Cyclops were undisciplined sheep herders with flocks of giant sheep in or near Sicily. One of them, Polyphemus, had a well-known encounter with Odysseus and his crew. Lesser Cyclops appeared in several modern Marvel stories.

In 1959, a man dreamt that he was Sinbad and encountered a cyclops on a Mediterranean island. He presumably drew from The Seventh Voyage of Sinbad, which was released in 1958. This cyclops was about ten metres tall, green and scaly.

“Sinbad” poisoned him by having it drink poisoned wine and tricked him Odysseus-style by telling him that his name was Noman. When the dreamer awoke, he was holding a gem from his dream. He apparently had projected his consciousness in the past, or perhaps another dimension (Tales of Suspense vol. 1 #6). 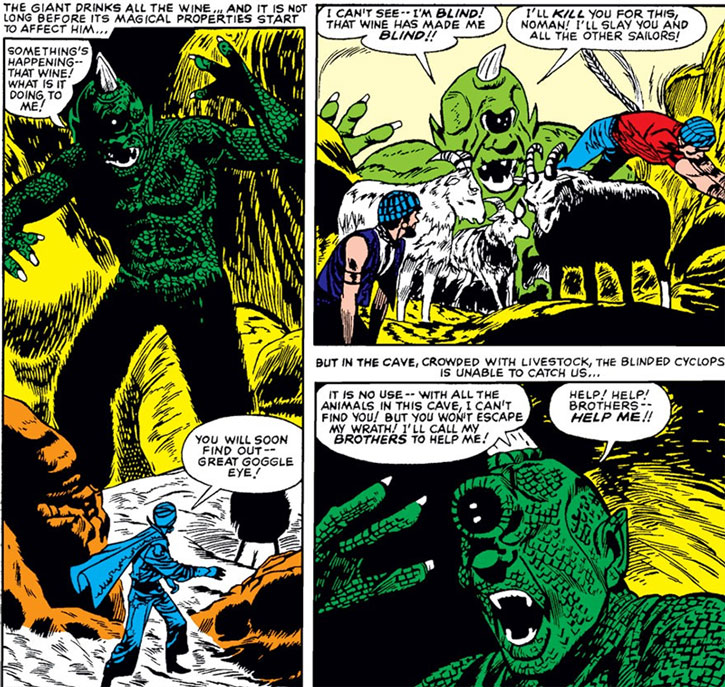 In 1960, a rich playboy named Duncan and his lady friend Amanda ran aground in the Mediterranean after their sports boat crossed a thick patch of mysterious fog. They discovered the frozen body of the Cyclops in an ice lake (an ice lake on a Mediterranean island ??).

Duncan, using his axe, freed the body from the ice. But it revived and became a menace until Duncan tricked him into running after him over the lake. The Cyclops’s weight broke the ice and it disappeared again under the surface (Tales of Suspense vol. 1 #10).

Some time later, Namor tricked Mister Fantastic into exploring an island in the Mediterranean, hidden from the world by mist. Mr. Fantastic soon encountered the Cyclops – though if it was the same Cyclops as the one encountered Duncan, his memory had been lost since he referred to Mr. Fantastic as the first human to intrude on his island for centuries.

Some time later, the Huntsman of Zeus conjured King Kong-sized versions of Polyphemus, Scylla and Charibdis to fight Namor and Hercules.

“Polyphemus” was much taller than in previous appearances (about as tall as the original three Cyclops), and had a gemstone replacing his eye. Alon with his two other cohorts, disappeared “back in the stuff of myth” when the Huntsman’s concentration was broken. It is thus likely that he was but a magical construct based on the real Polyphemus (Sub-Mariner vol. 1 #29).

The Huntsman’s version had orange skin in later panels. Unsurprisingly, the two non-Kirby-drawn Cyclops tended to fluctuate wildly in size from panel to panel.

The magical construct which the Huntsman of Zeus referred to as the returned Polyphemus was much bigger than the stats above.

Helper(s): Marvunapp.com for locating several of the appearances ; Jay Myers for his usual mythological tidbits and Chris for obscure DCU details. 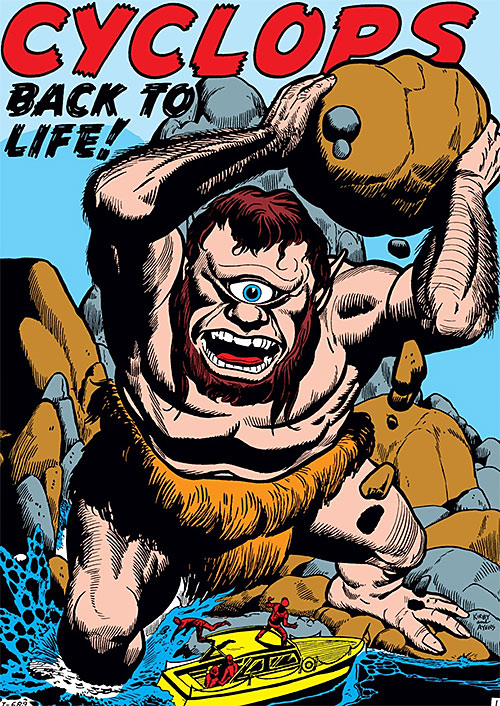