This is Cyclops after Giant Size X-Men #1 until the Twelve storyline (feel free to drop a few APs here and there for the 1970’s and 1980’s Cyclops, but there are no major changes). As you can see, he’s much tougher physically and mentally, and his optic blasts is more powerful and better controlled.

In fact, with an AV/EV of 12, he can routinely attempts Trick shots and to Block incoming energy blasts. Cyclops’ beam can have a normal Area of Effect.

Scott Summers was the older of 2 sons of Major Christopher Summers, a test pilot in the U.S. Air Force. When Scott was a child, Major Summers flew himself, his wife Katherine, and his sons Scott and Alex back from a vacation in his vintage private plane. The plane was attacked and set ablaze by a scout ship from the alien Shi’ar Empire.

Katherine pushed Scott and Alex out the plane door with the only available parachute. The parachute was unable to slow their fall sufficiently to prevent Scott from suffering a head injury on landing. The injury damaged the part of Scott’s brain that would have enabled him to control his optic blasts.

The two boys were separated by the authorities: Alex was adopted, but Scott remained comatose in a hospital for a year. Christopher and Katharine were believed dead. (Actually, they were taken prisoner by the Shi’ar; Katharine soon died but Christopher later became Corsair, leader of the Starjammers, a band of interstellar adventurers.)

On recovering, Scott was placed in an orphanage in Omaha, Nebraska that was secretly controlled by his future enemy Mister Sinister.

Years later, as a teenager, Scott began to suffer from severe headaches and eyestrain. He was sent to an eye specialist in Washington, D.C., who discovered that lenses made of ruby quartz corrected the problem.

While Scott was visiting a large city, his developing mutant power to project optic force beams finally erupted. It burst forth in an uncontrollable blast that demolished a crane, causing it to drop a huge object towards a terrified crowd.

Scott saved the crowd by obliterating the object with another blast, but they turned into an angry mob, thinking he had tried to kill them. Scott fled, ultimately escaping on a freight train.

Professor Charles Xavier and F.B.I. agent Fred Duncan joined forces to find Scott. Meanwhile, a mutant known as Jack O’ Diamonds, and later as the Living Diamond, forced the frightened boy to aid him in his crimes.

Xavier rescued Scott from the Living Diamond and enlisted him as the first member of the team of young mutants he would teach in using their powers, the X-Men.

As Cyclops Scott soon became deputy leader of the X-Men. He fell in love with his teammate Jean Grey, although his reserve and his worries about the dangers of his optic beams prevented him for years from expressing his feelings to her. When the other original X-Men left the team, Cyclops stayed on as deputy leader of the “all-new, all-different” X-Men. 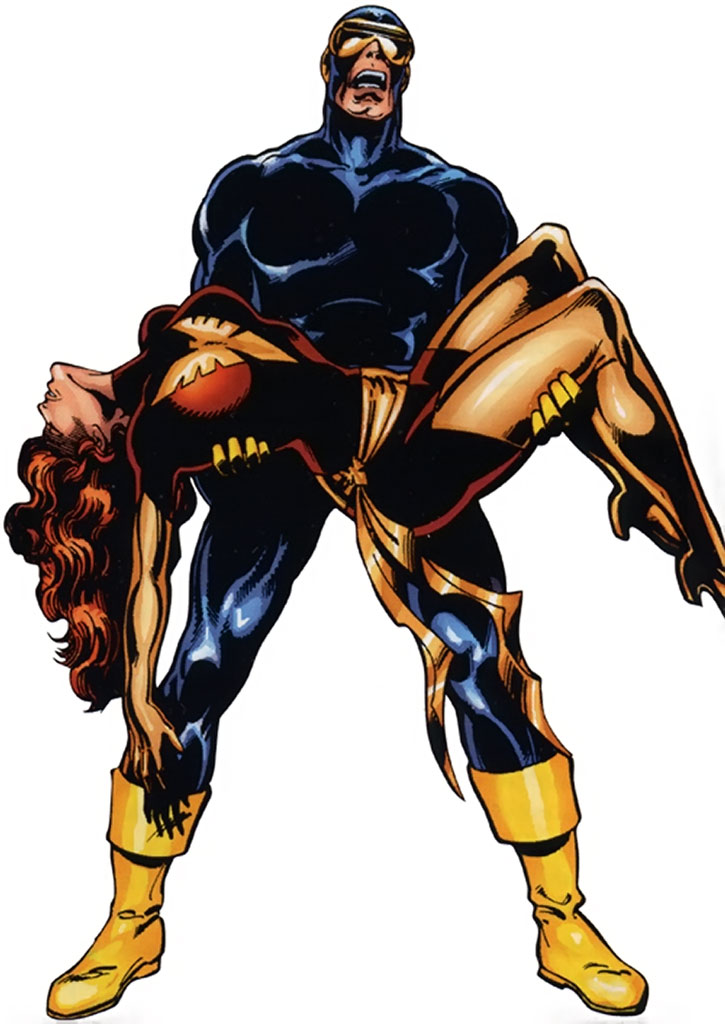 Shortly afterwards the cosmic entity called the Phoenix Force secretly placed Jean in suspended animation and impersonated her, adopting a form identical to hers. When this Phoenix committed suicide, Scott believed that the real Jean had died and he left the X-Men.

Eventually he returned to the team and met and married Madelyne Pryor, a woman who was Jean’s double; he was unaware she was a clone of Jean created by Mister Sinister. Scott and Madelyne had a baby son, named Nathan Christopher, and Scott again left the X-Men.

Subsequently, the real Jean Grey emerged from suspended animation. Scott left his wife and joined with Jean and the other original X-Men in founding a new team, the original X-Factor. Madelyne went insane, developed superhuman powers, and perished in combat with Jean Grey.

Later, Apocalypse infected Nathan with a techno-organic virus. To save his life, Scott was forced to allow a time traveling member of the Askani cult to transport Nathan to the 30th century of an alternate future. 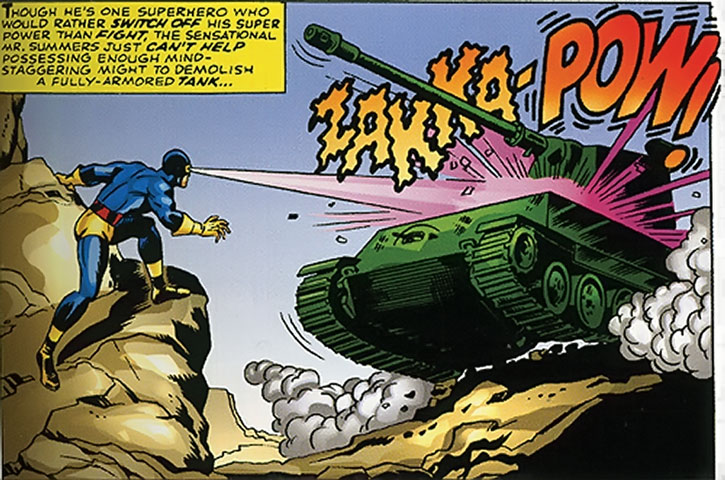 After Professor Xavier returned from a long sojourn in space with the Starjammers, Cyclops and the other X-Factor members rejoined the X-Men. Ever since then Cyclops has remained with the X-Men, sharing deputy leadership with Storm.

Recently, Scott and Jean were finally married. While they were on their honeymoon, Mother Askani, leader of the Askani cult, drew their spirits two millennia into an alternate future, where they inhabited new bodies. There, as Slym and Redd, they spent years raising young Nathan into his early adolescence.

Then Scott and Jean returned to their own time and bodies, and Nathan remained to grow up into his time’s greatest hero, Cable.

Scott and Jean are currently on leave from the X-Men and reside in Alaska.

Scott is now a Pro with a capital P, and a leader without peer. He’s a master at tactics (both teaching and implementing immediate action drills, and improvised tactics), and knows the strength and weaknesses of his troops inside and out.

He’s also noted for pushing his teams to their limits, both while training and on the field. In combat, he can devise ingenious plans in a flash.

Cyclops has gone from shy, nerdy teenager to tough, controlled adult. However he still has troubles expressing his emotions (to his credits, he lived through a number of personal tragedies), except when he’s alone with his wife.

”Failure” does not exist in his vocabulary. He tends to agonize over every single mistake he or his team make when an encounter is over. He’s very self-sufficient, and will never hesitate to sacrifice himself or his happiness for the cause.

His relationship with Jean is crucial to him, and they operate very well together. They trust each other with an uncommon intensity, and their deep bonds are only strengthened by their constant telepathic link. Heck, he’s even able to smile and relax when she’s around !

Just because I’ve always liked it, and whenever it’s posted, it’s in some atrocious form, I figured I’d clean up Kansas Jim’s old “DC Secret Age” posting from way back when, add a tiny bit, and post a clean copy to the list.

I figure I *did* suggest putting it in Sébastien’s archives, after all. The least I could do was put it in a presentable form, right…?

As a side-note, I had the interesting idea that, if you put the Marvel Family into the Golden Age, where they belong (they can survive to the 1990s and beyond if you want, but they make much more sense as Golden Age characters), you can put together a team with Captain Comet, Mary Marvel, J’Onn J’Onzz, Prince Namor (who fits the Secret Age to a T, I think), Donna Parker, and Blue Streak.

This could be the team that Triumph lead, which, when returning to our timeline, he confused with the early JLA. This cleans up that silly plot hole, and gives us back a 1960s-feel JLA (except for Namor in Aquaman’s place, but he was the best I could come up with).

The Secret Age was from the late 1950s to the late 1960s/early 1970s—a time after the House of Un-American Activities Committee had caused the JSA to disband and when costumed heroes and the like were not trusted so they stayed out of the limelight as much as possible.

The X-Men would, in all likelihood, be contemporaries of Blue Streak (once known as Quicksilver, and now known as Max Mercury), Captain Comet, the Challengers of the Unknown, the Doom Patrol, the Martian Manhunter during his early years on Earth, the Metal Men, and Metamorpho. 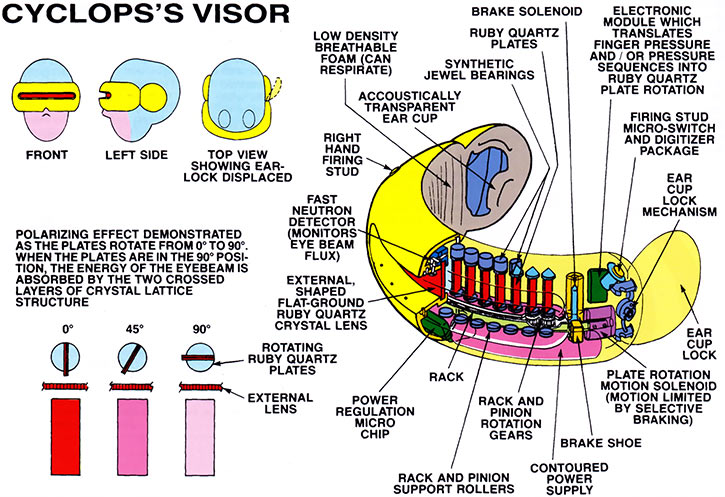 Possible, though non canonical heroes of the era would be the original Blue Beetle (Dan Garrett), the possibly apocryphal Green Lantern Donna Parker, one of the Manhunter characters, the second Sandman (Garrett Sanford), Sarge Steel in his P.I. days, and others.

The exploits of normal heroes like the Challengers of the Unknown and the Sea Devils, in combination with the occasional public exploits of the X-Men, the Doom Patrol and the rest (especially things like the Doom Patrol sacrificing themselves to save a small town from destruction) helped thaw public perceptions towards superheroes.

That paved the way for the Silver Age to begin in the mid-1970s, as opposed to the early 1980s by DC’s Zero Hour timeline.

Xavier would be the government’s expert on the booming “x-factor” (later “meta-gene”) population, while secretly protecting them from the very agencies he serves, and training them in the use of their powers, for reasons known only to himself.

For this reason, the X-Men remained more or less a secret superhero group until the late 80s when the Dominator genebomb created a significant number of metahumans.

At that point, Xavier took his institute and the X-Men public, because there were so many new metahumans in need of training and assistance with their new powers. There’s no way he could have reached and helped them all if everything remained a secret.

Of course most of the superhero organizations in the DCU would be aware of the X-Men as a group and their purpose long before this point. Things like the Crisis would tend to throw the X-Men together with other groups (after all, the Monitor could hardly pass on their assistance) so, on that front at least, they haven’t been a secret group since the early to mid 1980s.

In the present day, the X-Men and Xavier’s Academy basically function in a manner similar to the way Justice League Task Force was supposed to be operating at one time, taking in new metahumans and educating them in the use of their powers.

Since the X-Men started out back in the 60s, the first generation (Cyclops, Marvel Girl, Iceman, etc.) are all middle-aged heroes, similar to the Justice Society prior to being aged to their proper ages in Zero Hour.

The second generation of X-Men (Wolverine, Colossus, Banshee, etc.) came onto the team in the late 1970s or early 1980s and so have a good deal of experience behind them.

The New Mutants may or may not still be students at Xavier’s Academy. Depending on campaign taste, they may now be old enough to be full-fledged X-Men with a new batch of characters waiting to learn from them.

Drawbacks:
Mistrust (Mutant), MIA to not letting his emotions show, Secret ID, Loss Vuln – AV of the Blast diminished by 05 without the VISOR, and Scattershot becomes Always On.

Don’t play pool against this guy

Scott’s Schtick denotes his intuitive mastery of spatial geometry. He can lower by 2CS the difficulty of Trick Shots that imply complex trajectories and ricochets – much like a pool expert.

Given perfect conditions, such as large areas of reflective materials and reflective (i.e., metallic) targets, he can perform a Selective Area Attack over a radius equal to half his AV (06). The best known example is probably his destruction of a dozen killer bumpercars moving fast around Nightcrawler while they were trapped in Murderworld.

His PL estimates do include his mental defenses, which provide a top tier defense, but not his costume, which offers only a very limited scope of protection.

Cyclops commonly performs power stunts such as Area (cone) attacks and more elaborate ricochets. He can even stunt a less powerful attack, which can be useful if he doesn’t have his visor. 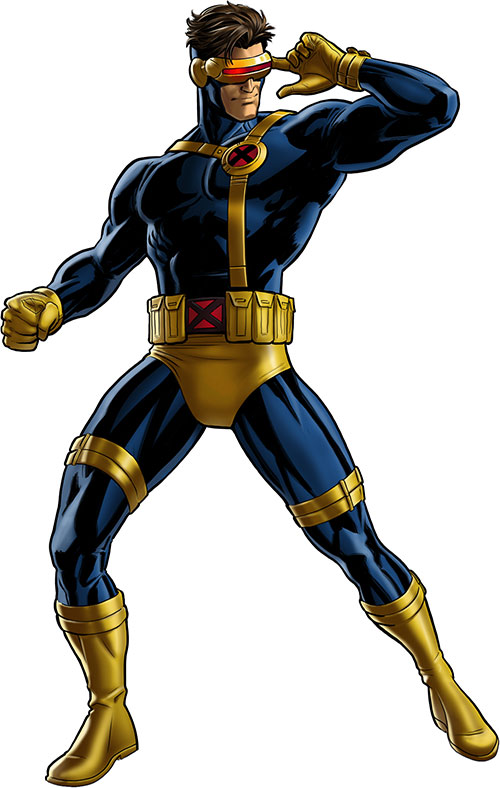 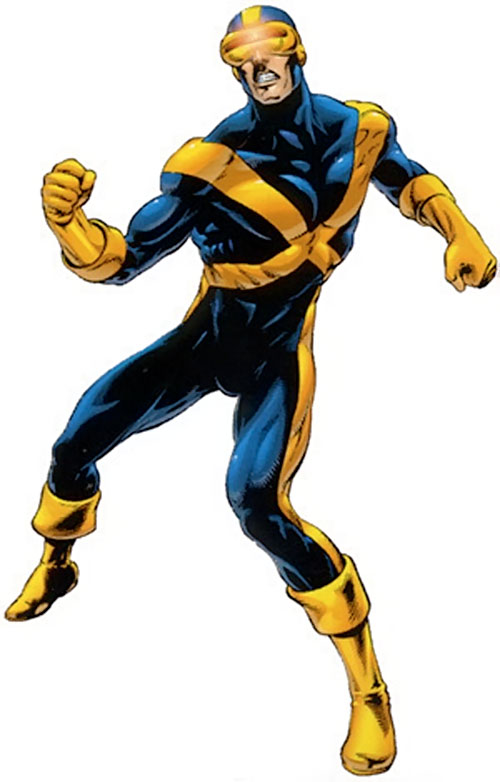 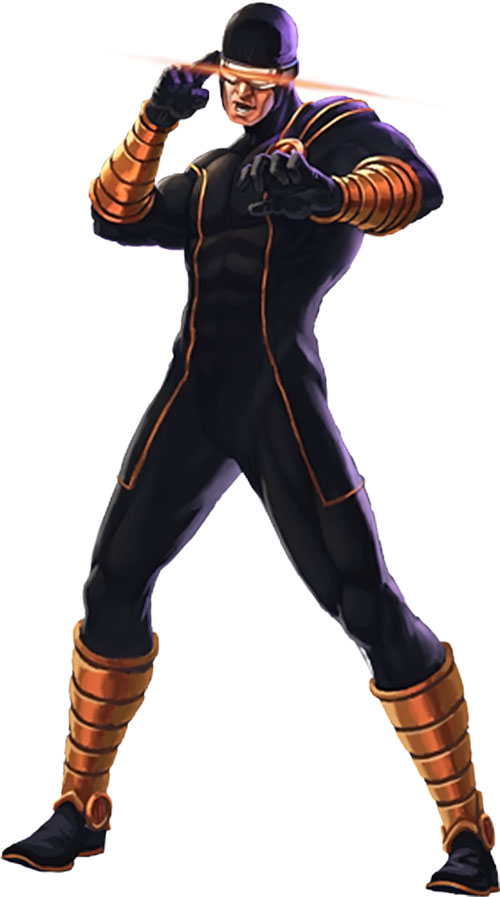 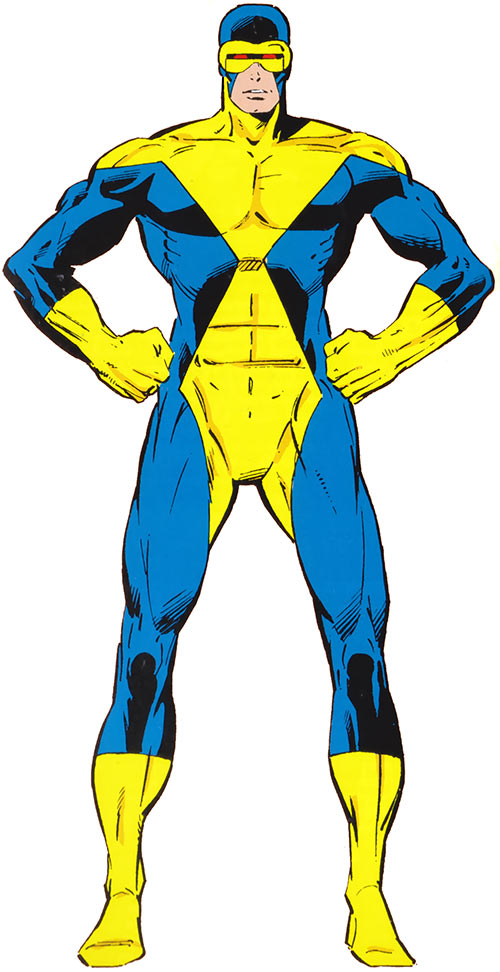 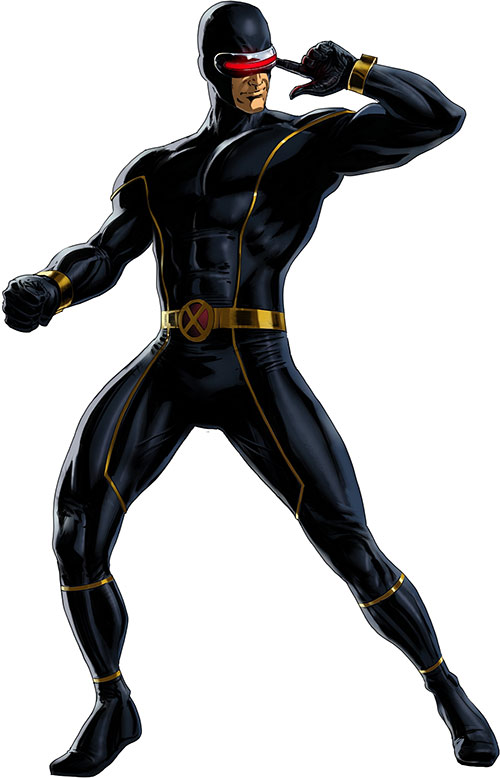 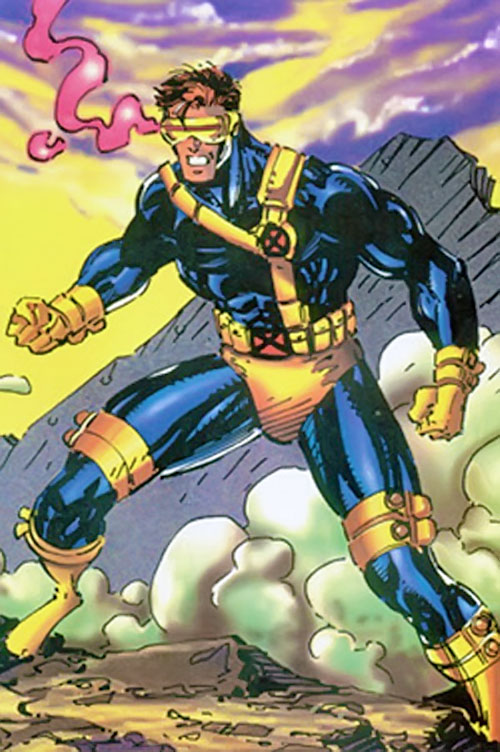 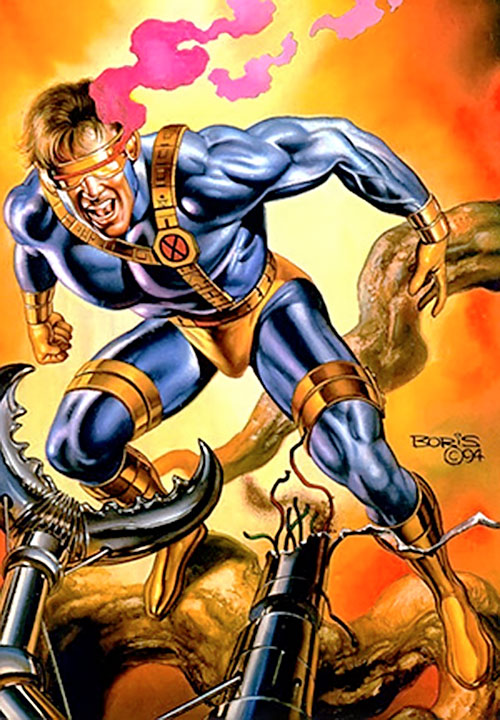 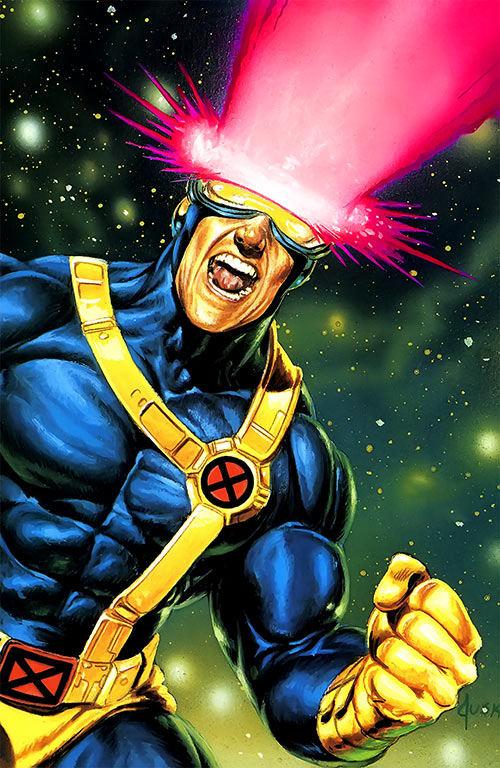