Creegan now has Bronze Age -style “radiation powers”. These are way more powerful than his Silver Age  static electricity powers were. His new ability include :

It seemed that the Cyclotronic Man needed to reroute his energy from one power to the next. He did not use multiple powers at once (though assuming that he can’t would be reaching) and his tactics made more sense if he needed to focus on one power at a time.

While Creegan was serving a likely fatal 20-year sentence, the deadly criminal cartel The 100 remembered about him. They got him out of prison, and The 100’s scientists not only stabilised his condition — resetting his lifespan to something more acceptable — but also mutated and enhanced his powers.

Creegan’s abilities were likened to that of a human cyclotron. Thus, he changed his code name to match. He also got himself a costume.

In 1977, Black Lightning (Jefferson Pierce) made considerable trouble for The 100 in the Suicide Slum area. Meanwhile Jimmy Olsen (widely known as Superman’s Pal) also started investigating. The 100 unleashed the Cyclotronic Man and he nearly killed both targets, though Black Lightning narrowly punched him unconscious. 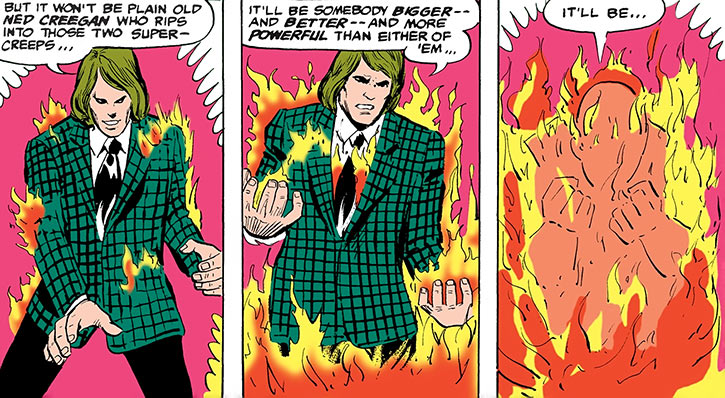 Superman then came in. He mistakenly thought that Black Lightning had attacked Olsen. During this misunderstanding, Creegan regained consciousness. He attacked Superman by surprise and sped up his particles, but Black Lightning intervened.

With his big attack foiled, Creegan collapsed the building on his three opponents, but that didn’t work either. Since Superman still insisted on treating Black Lightning like a criminal, the Cyclotronic Man nevertheless could flee.

However The 100 abandoned him for his failure. They even debated killing Creegan as a liability. Black Lightning and Superman soon found and arrested the now supportless Cyclotronic Man.

At least the costume is simple. In his civilian identity Creegan wears a typical 1970s ensemble, looking quite garish by most subsequent sensibilities.

Creegan is very thankful toward The 100 and Tobias Whale. As a result he’s determined to serve them as best as he can as long as they are loyal toward him. 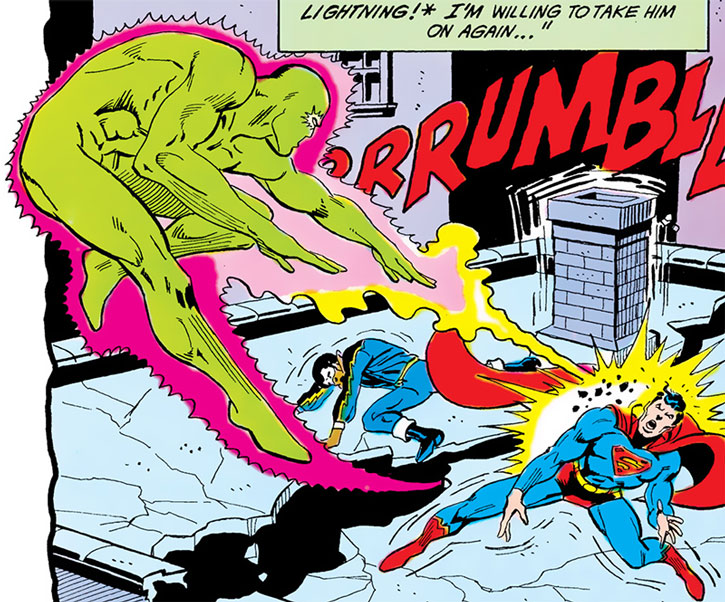 He’s very confident in his vast array of powers, but doesn’t have much actual experience with them. Thus, he isn’t as tough an opponent as his powers would suggest. His limited intelligence level also works against him.

He was shocked to discover that The 100 had dropped him like last week’s fish. This made him very willing to turn against them since he felt so betrayed.

“I’ve got more powers than Carter has peanuts.”

“Wondering about the pain ? That’s what happens when even *your* atomic particles are speeded up a millionfold ! I’m a human cyclotron, Superman — and I’m gonna scatter your atoms all over Metropolis !”

In many Mayfair and writeups.org profiles, the APs seem a bit low for fighting Superman.

The traditional assumption is that Supes’ opponents burn their Hero Points on some key attacks to score some RAPs against the Man of Steel, and maybe get a good roll or two.

Whereas Superman doesn’t really spend HPs, is surprised when he has to, and has various penalties (most notably to his OV) since he’s not fighting all-out.

For instance in Creegan’s case, the Cell Rot can be upped to 15 with the Power Reserve and he has the HPs to boost that high enough to get 15 RAPs even against Superman, possibly Stunning him on a good roll. 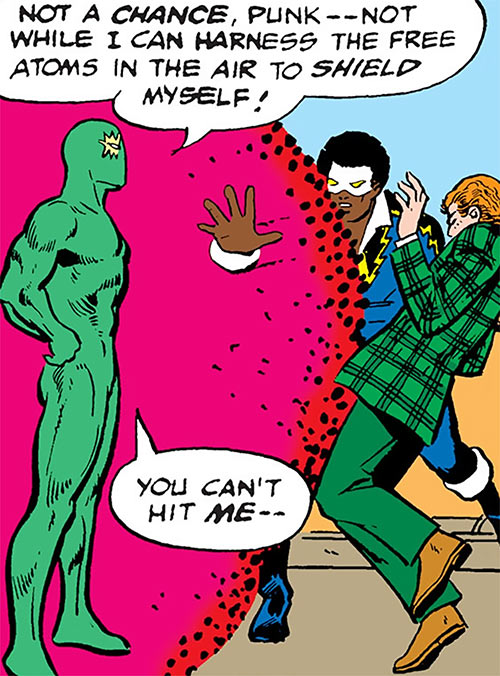 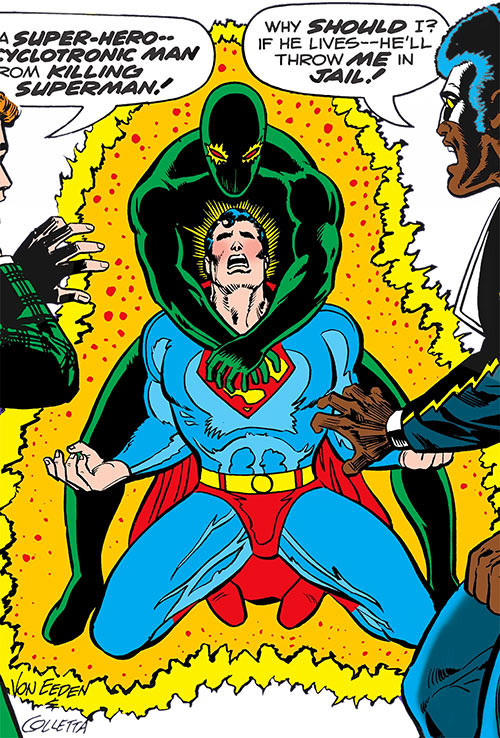