The Cylon Centurion is an outgrowth of the oldest model and is designed for combat. They are designed war machines that have built in machine guns and scything claws. They have no need for atmosphere of any kind. They are implacable hunters and killers.

If a Cylon Centurion is killed and is within a few light years of a resurrection ship or a Cylon home world it will be reincarnated if it suits the super-consciousness and the needs of the Cylon nation.

All Cylon models, including the Cylon Centurion, have a weakness to an unspecified frequency of energy that is found naturally occurring in the Rangar systems. While in a system where this energy is radiant, or exposed to it directly, the Cylon looses the ability to transfer consciousness. It also grows ill and eventually dies.

Cylon Centurions are the strong military arm of the Cylon nation. The appeared in this form at the beginning of the apocalypse. They have participated in wave after wave of assaults against the human worlds and fleets since then.

Cylons are an anthropomorphic robot out of nightmares. Cylon Centurions are tall and silver, with a single sweeping red eye visible through a helmet slit. They are fast strong, daunting and nearly invulnerable.

The Cylon Centurion singularly lacks in personality in all ways other than relentless pursuit of programmed goals.

Alternately you could have the Galactica arrive at Earth with the Cylons in pursuit, bringing their war to the DCU’s doorstep. Or worse, maybe the Cylons have arrived ahead of Galactica and begun infiltrating Earth’s population. The robotic Manhunters were revealed as having done something similar in the Millennium mini-series.

Skills:
{Generic: A Cylon Centurion can have any skill at its link level. Programmed as needed by mission}.

Note:
Mental attacks in the Galactica context is the province of machines fighting each other. Computers and other advanced machines are considered to have mental stats for purposes of interface or virus warfare. 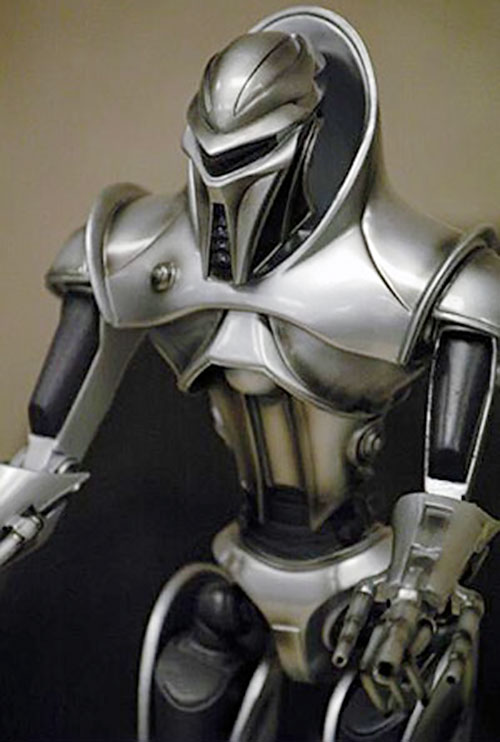