On the other hand, his powers can be genuinely useful for Gamemasters. So having a profile for him can be quite handy, he’s easy to use and play, and he has a slight bit of cachet for having fought Batman.

The Cypher has an extraordinary, hypnotic voice. He can brainwash victims and hypnotise them in order to give them suggestions.

However subjects have to passively listen to his voice for the effect to take hold. Usually, the Cypher arranges to introduce a subliminal tape in the subject’s environment. It will order the subject to meet him at some secluded spot. Then he finishes talking to his entranced victim.

Other common ways to have the subject listen passively to his commands include :

The Cypher almost always has the subject regress to childhood. Then Twombey assumes the role of an authority figure, such as a father or teacher. This lessens the subject’s resistance.

The Cypher first met the Batman and Robin when working as an industrial spy. He was after an important weapon project for the US government, which had been split into three sub-projects. One of the three had been awarded to Waynetech.

The Cypher hypnotised the CEOs of the other two companies. After pumping them for information had them commit suicide. He then zeroed in on Lucius Fox to round up all the necessary info on the whole project.

The Cypher infiltrated Waynetech as a repairman for the elevator music system. He planted a tape with a subliminal track, which brainwashed Fox into coming to meet him on a bridge. Batman (Bruce Wayne), Robin (Tim Drake) and Jean-Paul Valley rescued Fox in the nick of time. The Cypher was arrested and sent to Blackgate. 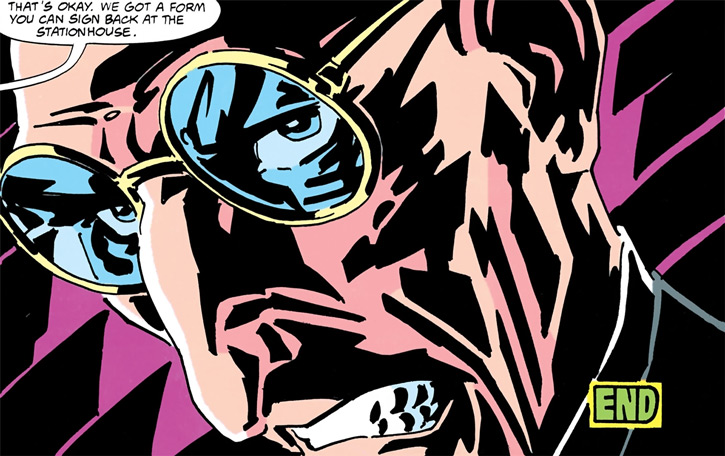 There, he became an ally of Cluemaster. Cluemaster made Cypher the cornerstone of his plan to escape – along with Czonk and the Electrocutioner. The Cypher brainwashed their psychiatrist, who brought them guns, and they escaped.

In the sewers, the Cypher attempted to take mental control of the other three convicts. But Cluemaster had anticipated this, and all three were wearing earplugs. Cluemaster then gunned down the Cypher, leaving him for dead in the sewer.

Just a bald, slim guy with thick glasses and an incredibly smooth and precise voice. He looks a bit odd, though.

A slippery, creepy old guy with a golden voice. He has an unhealthy and vicious vibe, and seems to really enjoy mental domination.

He could be a minor student of Doctor Faustus, with a small voice box mutation.

Bonuses and Limitations:
Charisma and Medicine are Powered Skills and Contingent Upon Hypnosis.

Listen to the man with the golden voice ● 11 points ● Descriptor: Sonic hypnosis
Affliction 5 (Resisted by Will, Entranced/Compelled/Controlled, Cumulative, Reach 3). The subject must be passively listening to Cypher for the effect to work, but his voice also works if recorded and played so it’s a Quirk.
Another Quirk is that it’s possible to notice that his voice isn’t normal and something’s going on (it’s a Challenging Perception or Insight roll).