Purpose :
The Cabal is the name given to various clans of Daemonites that survived the crash of their space ship on Earth at the end of our prehistory. All their schemes aimed either at the destruction, the corruption or the conquest of our planet.

Modus operandi :
They usually operate undercover. As they’re still a minority, they know that if their existence were publicly known, the human race would certainly unite to exterminate them. Throughout the history, they have planned various operations, terrorism, assassination, mass murder, war, government infiltration…
Their unique ability to possess human hosts gave them sufficient leverage to pull superpowers string behind the scene. Be it Rome during the Antiquity or USA in the Modern Ages, it looks like there has been Daemonite influence behind many human conflicts.

Extent of operations :
Throughout the world, throughout history. Each time a opportunity to conquer or destroy the Earth.

Relationship to conventional authorities :
The top intelligence agencies of the world, like International Operations in the USA or the UN’s StormWatch know of their presence among us. The more mundane human organizations are oblivious.

Bases of operations :
Washington DC, Gamorra, Ex-Yugoslavia. All in all, anywhere near a source of power. Some clans are mobile.

Former bases of operations :
Rome in the Antiquity, Germany during both WW, Moscow during the Cold War. Helspont operated from is submarine called the Behemoth before being dealt with by the WildCATs.

Major funding :
Unknown but they manage to have very deep pockets. Though the fact they manipulated many government throughout history is surely an explanation.

Known enemies :
The Kherubims who crash-landed with them after a terrible confrontation in space battled them all along human history, and their latest representatives, the WildCATs of Lord Emp and are their biggest foe nowadays. Remember that Zealot founded the Coda on Earth mainly to train formidable fighters against the Daemonites.
Also I.O. was specially founded, in the United States, to fight this threat. And particularly its recent Puritans branch, extremist vowed to eradicate any alien on Earth. And StormWatch is confronted to them from time to time. The Gnome opposed Helspont in his project Reunification.

Known allies :
The Coda now sells their services to them. Gamorra harbored Lord Defile, though they may have been oblivious of it. And many governments, throughout human’s history, were infiltrated at the highest level and had their resources diverted in the Cabal’s way. For instance, the latest being the USA as the Vice-President was possessed by the Daemonite B’lial.

Number of active members :
Unknown but on the thousands. They come in spades to be slaughtered by Zealot, Grifter, Deathblow…

Number of reserve members :
None

Organizational structure :
The Cabal has a somewhat feudal structure. The highest rank are the High Lords, rank granted by the detention of one of the three keys necessary to activate the original space ship. Then, there is an obscure pyramid of Lords, Officers, Scientists, Soldiers. There social ladder is climbed by accomplishing high deeds, one of the biggest being killing a Kherubim High Lord.

Membership requirements :
Being a Daemonite is a sure way to be a member. But Humans and Half-Breed, lured by the promise of power once the world is conquered are known to join their ranks.

Founder :
The two High Lord that survived the crash, namely Lord Defile (the political leader of the ship) and Helspont (the military leader of the army aboard the ship). Each of them has founded his own clan and are known to battle each over some piece of power.

Other leaders :
The third High Lord was the captain of the ship. He had the third Daemonite key, but he died in the crash.

Major campaigns or accomplishments :
Hightower is known as being Genghis Khan and Stalin, he is the one responsible for Lord Emp’s current amnesia. Defile fueled Germany with dreadful chemical warfare during WWI. Some genocides were also caused them, like the Ex-Yugoslavia cleansing.
Defile had brainwash the MIA members of the former StormWatch Prime to keep him updated on various UN’s intelligence. They were sent in a campaign of assassination of the members of an international committee called to examine Helpont’s Project Reunification’s impact on the world’s economy.

Major setbacks :
Project Reunification, planned by Helpont, and trying to bring back a Daemonite fleet from the far reaches of space toward Earth was spoiled by the WildCATS.
The “Wildstorm Rising&lrdquo saw all the heroes of the Wildstorm universe battling to prevent Defile, Helspont and Hightower from taking control of what everybody believed as being the Daemonite Dreadnaught (it was, indeed, the Kherubim ship, but it represented a deadly menace, anyway, if ever getting in the wrong hands). Defile wanted to use her awesome firepower to subdue Earth to surrender, Helpont just wanted to use it for human race’s eradication, Hightower was the fool.

Standard Daemonite :
The average Daemonite cannot stand Earth’s atmosphere as is. It is deadly for him. But thankfully, every Daemonite has the ability to possess a host body.
In their natural form, they look like standing reptiles with a big, long fanged mouth and sharply clawed hands. They also have a second pair of weak arms they can use to do delicate manipulations.

Resources :
Each clan can count on the equivalent of Wealth: 024.

Gear:
The Daemonites are equipped with many weapons unknown to the current Earth’s technology. They comprise a variety of Energy Guns, lethal gas…

Helspont Project Reunification. He tries to bring to Earth a fleet of Daemonite vessels to destroy the human race. For that, he uses an orb of power (the same that gave Void and Providence their powers). The Vice-President of the USA is a Daemonite and manages to raise the funds to build the necessary installation to open a outer space gate using the power of the orb.

The plan is foiled by the intervention of the WildCATs and the Gnome (who wanted the Orb’s power for himself). Upon the end of this incident, Helspont in reported dead, and the arriving is destroyed.

Hightower, with the help of the renegade Coda Artemis, captures Grifter. They torture him as bait for both Zealot (Artemis has a score to settle with her) and Lord Emp (Hightower wants to kill him and the WildCATs to gain status among the Cabal).

The survivors of Project Reunification manage to infiltrate Skywatch in an attempt to reach Helspont on Earth. They take possession of Diane LaSalle, Backlash’s girlfriend, pissing him off in the process.

Backlash, in an attempt to gain information from I.O. on the aliens that abducted his girlfriend, teams with Grifter to mop up a former I.O. failed experiment.

Backlash’s quest to find S’ryn and restore the psyche of his girlfriend, Diane Lasalle. Through many battles with S’ryn and his Daemonite minions, Backlash managed to find and destroy S’ryn, while restoring his girlfriend.

In his last confrontation with the Daemonites, Backlash infiltrated Helspont’s Behemoth, fighting the Daemonite Lord long enough to allow the heroes in the “Wildstorm Rising” saga to combine their forces and save the world.

Richtoffen, a former Cyberdata’s genius, is indeed a Daemonite. He tries to obtain the technology used by Lord Emp to build Spartan to fuel the Cabal with an army of indestructible hosts.

Lord Emp is confronted with is mad brother, Lord Entropy. Formerly, during Earth’s Middle Ages, Entropy’s human wife was possessed by a Daemonite and Emp had to kill her. Entropy, supposed dead, uses his floating island fortress to abduct entire luxury liners over the Bermuda. He confronts the WildCATs, who destroy the fortress.

The Cabal tries to kill Emp by impersonating Maul. The day is saved by Ben Santini, at the time Operation Director of I.O., even as the man holds a deadly grudge toward the Kherubim for ruining his knee during a firefight in WildCATs #2.

Throughout these issues, we learn that Defile had brainwashed Flashpoint, Nautika and Sunburst after their capture in Kuwait. Now, he plans to use them to pit the WildCATs against StormWatch. Which succeeds when he makes Maul carry a nuke that is supposed to have killed Battalion and Mr White impersonates Maul in the WildCATs.

However, the plan is cancelled with the emergence of the Daemonite keys.

The whole crossover is centered around the 3 Daemonites keys and the dreadnaught, and the quest of three powerful Daemonites to get control of it (Defile, Helspont, Hightower). It required the whole roster of WildStorm superheroes to counter them.

The “Homecoming” arc, where we learn that the ever lasting war between Kherubim and Daemonites has been over for centuries. Earth was simply too remote a world to be worth spending the resource to inform them of it.

The war ended with the collapse of the Daemonite political system. Daemonites refugees fled toward Khera and were treated as very inferior citizens in the Kheran castes system. Zealot, turns her back on Voodoo because of her Daemonite blood.

The big joke is, with all their efforts at warning the WildCATs, the Cabal never managed to destroy them. It needed peace between the two races to shatter the heroes’ team.

WildCATs #37-49 : The race across time, after the Puritans who are getting back in time, up to the date of the battle of the Kherubim and Daemonite ships, to blow them to pieces before they can land. 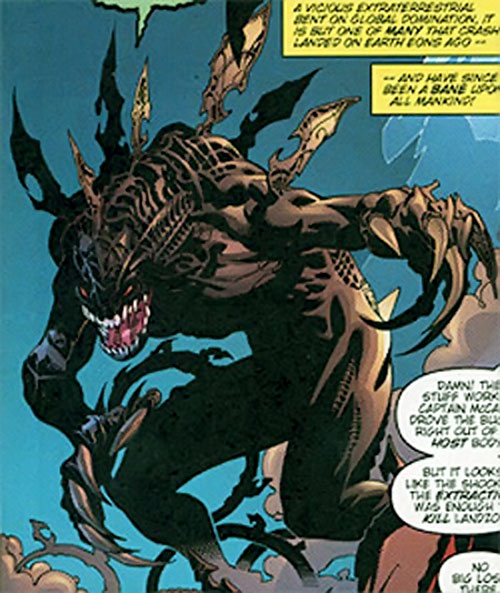 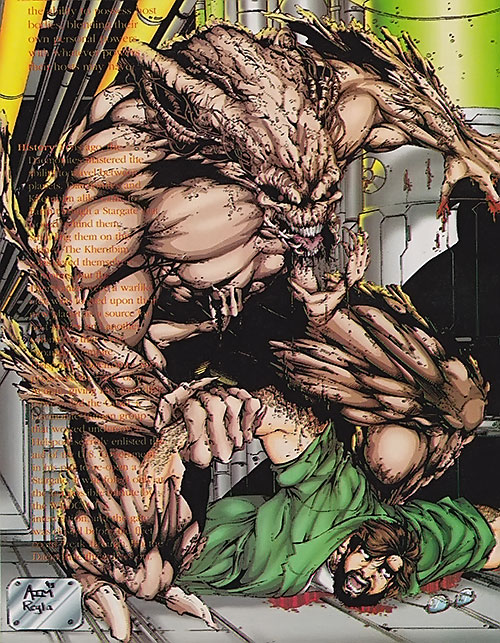