L.E.G.I.O.N. was a good space adventures book that we quite liked. But I’m unsure of how much of a splash it made.

Dagon-Ra’s powers are all aspects of his ability to transform and transmute matter. At its simplest and most basic, this allows him to turn one form of matter into another. One example is when he transmutes air into gold nuggets (in DC Heroes terms, Transmutation).

He can, when transmuting air into solids, shape this matter into useful forms. For example creating stairs to get down from a cliff or a statue of a woman to impress her (Matter Manipulation).

He’s also a space-pirate captain with an iron fist. In this role he demonstrated considerable force-of-personality and organizational abilities (Charisma, Military Science, Vehicles/Space). He leads a band of roughly 1000 pirates of various interstellar races, with dozens if not hundreds of small spaceships.

Dagon-Ra’s name and powers are reminiscent of Jan Arrah’s (Element Lad of the Legion of Super-Heroes, in the 30th century). He might thus be an ancestor. But his mastery of his ability, and his ruthlessness, far exceeds Element Lad’s.

Dagon-Ra’s power acts with the speed of thought and his mental defenses are ever-alert. Meaning that Dagon-Ra is almost never caught off-guard (Enhanced Initiative).

Dagon-Ra can use his power defensively to block attacks. For example, materializing a titanium wall in the path of a super-fast, super-strong opponent.

Against more human level opponents, he might protect himself by transforming the attacker’s feet and hands to a soft, spongy substance the moment before they land a punch or a kick, then instantly transforming them back to normal. This creates a very disconcerting and intimidating effect.

In either case, the speed and effectiveness of Dagon-Ra’s defense is best represented with Force Shield. But the GM should make sure to describe the special effects of his shield in terms of his Transmutation powers.

Offensively, Dagon-Ra could simply turn opponents to vapor (or slime, etc.). Yet he usually prefers to dominate and control them rather than just killing them. Thus he will neutralize attackers by immobilizing them – creating lead boots for them or even turning their skin into a hard, rocklike substance (Paralysis).

He also frequently makes use of poison. He’ll turn air into gas, or even blood in the veins into poison (Poison Touch). He’s threatened to turn a person’s internal organs into cyanide.

His power has proven potent enough to take down an entire squad of L.E.G.I.O.N. troops (including the nearly invulnerable silicon-based L.E.G.I.O.N.naires Garv and Strata) in a single Phase. This assault left his own troops, scattered among them, untouched.

Dagon-Ra’s Poison Touch has even subdued Lobo and the Daxamite Lar Gand. In Gand’s case, Dagon-Ra turned his blood into liquid lead.

Given his transmutation powers, it is possible that Dagon-Ra is a Trommite. It depends on which Hypertime -line you’re in. In some continuities, Trom is not inhabited until after Dagon-Ra’s time. It ionly gets a population when it is seeded with metahumans from Earth by Lar Gand of Daxam.

Whatever his origins, Dagon-Ra became a major interstellar threat late in the 20th century. Taking advantage of the collapse of the Green Lantern Corps, he put together a band of nearly a thousand heavily armed pirates.

Operating out of a fortress base built into a massive asteroid, their raids were a major threat to the entire Alpha Centauri sector. Meaning nearly 30 worlds in total. They took hostages everywhere they went to discourage reprisals.

Some of the opponents Dagon-Ra personally subdued included Adam Strange (the defender of Rann), Captain Comet, and even Lady Quark, one of the most powerful humanoids in the galaxy. At some point fairly early in his career, he forced an alien insectoid telepath to serve him by the expedient of killing ever other member of the alien’s hive.

When Adam Strange was captured, the Rannians contacted L.E.G.I.O.N., the new interstellar police force founded by Vril Dox II. Dox crafted an audacious plan to disable Dagon-Ra and demoralize the pirates. He then led L.E.G.I.O.N.’s entire armed might in a frontal assault on their asteroid base.

But Dox overestimated his forces and underestimated those of Dagon-Ra. The pirate lord humbled and defeated the L.E.G.I.O.N. contingent and nearly killed Dox himself.

But in the end, Dagon-Ra dropped his guard just long enough to be beaten. He died in the aftermath of the battle.

A tall man with an arrogant bearing. He has striking white hair and blue eyes.

He wears a bluish-green sleeveless tunic with a high collar and a chest design of white and red. His leggings and gloves are white, and he has buccaneer boots the same color as his tunic.

Dagon-Ra ruled his men with a fist of iron and a driving ambition.

Wealth was meaningless to him, as his powers could produce anything he needed. But he lusted after power and would do anything to get it. This included butchering non-combatants or taking them hostage. He unhesitatingly committed genocide on Telepath’s hive to make sure that no other telepaths would serve anyone else.

He was a real empire-builder. Dagon-Ra had a commanding air that impressed the ex-queen Lady Quark, at least until she realized how evil he was. He was very quick to make threats and to demonstrate his power to carry them out, demanding absolute subservience from everyone around him.

He enjoyed showing his superiority and was quite theatrical, often unnecessarily snapping his fingers when making transmutations or standing posed, hands on hips, effortlessly deflecting attacks without moving.

He found battle almost amusing because he was sure his opponents were doomed. For fun, he would sometimes stretch out the contest a little, standing back a bit and letting his pirates fight. He was sure he could step in and win the battle at any moment. And he enjoyed a bit of gratuitous bloodshed.

He especially enjoyed humbling very powerful opponents like Lady Quark or the Daxamite Lar Gand. Even when it might have been more practical to kill them, he preferred to force them into service, supremely confident that he could handle any threat they posed.

“I am not interested in money. Power is what I crave ! After all, what use is mere wealth to one who can turn the very air to gold with a single thought ! Ownership is nothing. Power – control – is all !”

“My plans call for one with your special talents. JOIN ME or DIE !!“

“Be careful, Telepath. It is easy for one such as I to become suspicious of my allies. You would not like it if I began to doubt you !”

“You live because I allow it. Deceive me – take one step out of line – and I’ll turn every organ in your body into cyanide !”

“Shall we enjoy the carnage for awhile ?”

Drawbacks:
SIA to forcing super-powered opponents to serve him (rather than killing them outright).

Unfortunately, like all characters who appear in only one story arc, some of his stats involve speculation. His BODY in particular is ambiguous. There’s no reason for him to be superhumanly tough. But he survives a *lot* of damage in a short span of time. To deal with that, I’ve given him Damage Capacity.

Alternately, you could replace Damage Capacity with Invulnerability: 14. The advantage to this second approach is that it would give you an easy way to bring him back. I’d love to see him hook up with Ig’nea to seek revenge on Vril Dox. Talk about trouble!

One episode indicates a link between his concentration and his matter transformations. It may means that Transmuation is not permanent. I’ve thus chosen instead to use Paralysis, which has a limited duration built in.

If you choose, you can remove Paralysis and make Transmutation and Matter Manipulation temporary, requiring the expenditure of an Automatic Action each Phase to maintain a transformation.

In that case, Wealth is no longer unlimited, and should be set at about 17. However, one quote seems to indicate that this last point, at least, is not true. 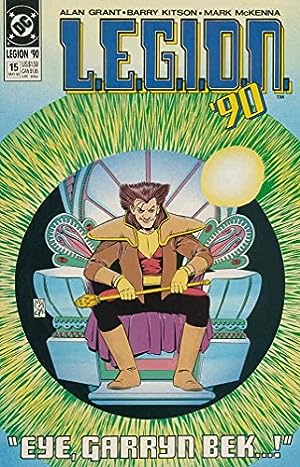 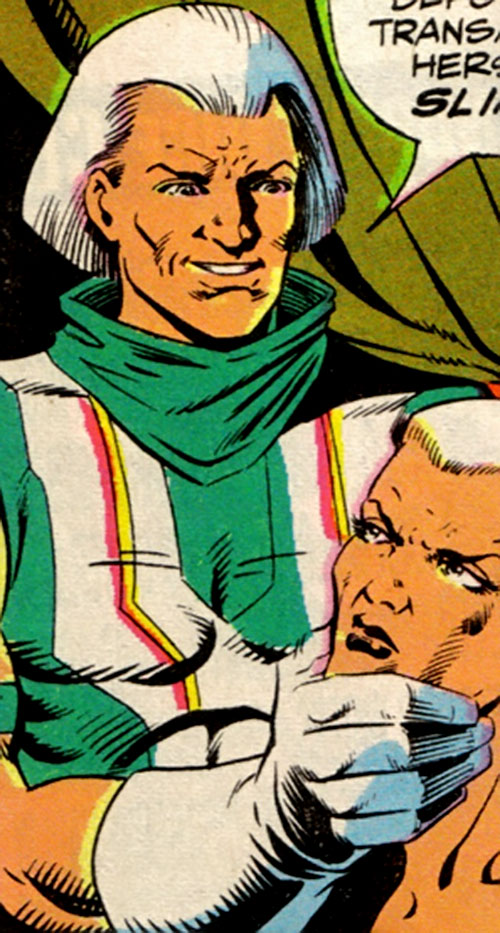 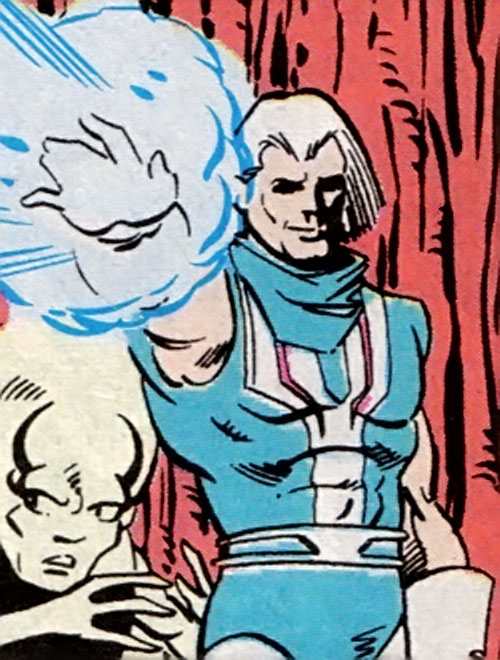